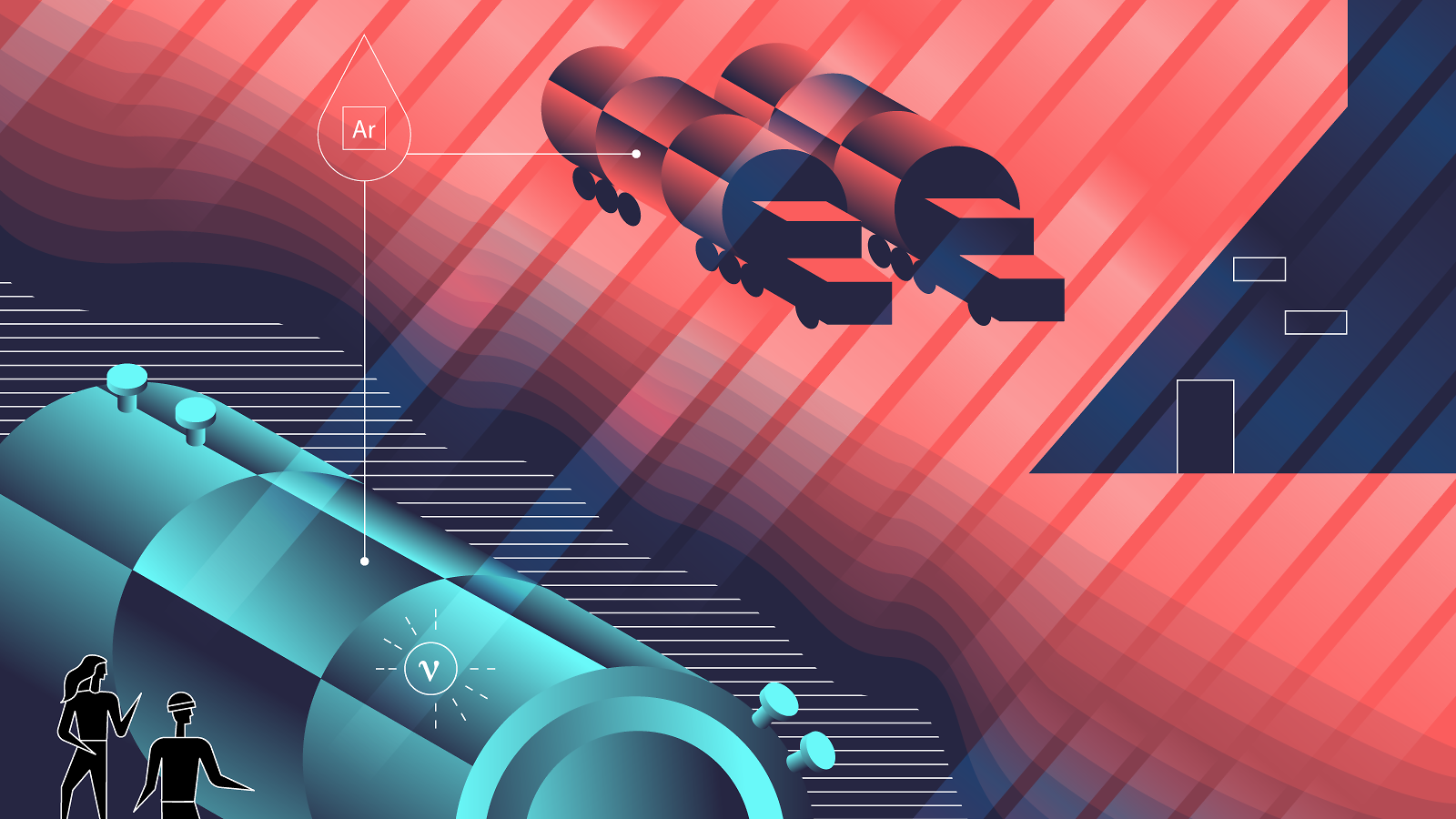 Nearly a mile below the surface of Lead, South Dakota, scientists are preparing for a physics experiment that will probe one of the deepest questions of the universe: Why is there more matter than antimatter?

To search for that answer, the Deep Underground Neutrino Experiment, or DUNE, will look at minuscule particles called neutrinos. A beam of neutrinos will travel 800 miles through the Earth from Fermi National Accelerator Laboratory to the Sanford Underground Research Facility, headed for massive underground detectors that can record traces of the elusive particles.

Because neutrinos interact with matter so rarely and so weakly, DUNE scientists need a lot of material to create a big enough target for the particles to run into. The most widely available (and cost effective) inert substance that can do the job is argon, a colorless, odorless element that makes up about 1 percent of the atmosphere.

The researchers also need to place the detector full of argon far below Earth’s surface, where it will be protected from cosmic rays and other interference.

“We have to transfer almost 70,000 tons of liquid argon underground,” says David Montanari, a Fermilab engineer in charge of the experiment’s cryogenics. “And at this point we have two options: We can either transfer it as a liquid or we can transfer it as a gas.”

Either way, this move will be easier said than done.

The argon will arrive at the lab in liquid form, carried inside of 20-ton tanker trucks. Montanari says the collaboration initially assumed that it would be easier to transport the argon down in its liquid form—until they ran into several speed bumps.

Transporting liquid vertically is very different from transporting it horizontally for one important reason: pressure. The bottom of a mile-tall pipe full of liquid argon would have a pressure of about 3000 pounds per square inch—equivalent to 200 times the pressure at sea level. According to Montanari, to keep these dangerous pressures from occurring, multiple de-pressurizing stations would have to be installed throughout the pipe.

Even with these depressurizing stations, safety would still be a concern. While argon is non-toxic, if released into the air, it could displace the oxygen. In the event of a leak, pressurized liquid argon would spill out and could potentially break its vacuum-sealed pipe, expanding rapidly to fill the mine as a gas. One liter of liquid argon would become about 800 liters of argon gas, or four bathtubs’ worth.

Even without a leak, perhaps the most important challenge in transporting liquid argon is preventing it from evaporating into a gas along the way, according to Montanari.

To remain a liquid, argon is kept below a brisk temperature of minus 180 degrees Celsius (minus 300 degrees Fahrenheit).

To avoid these problems, the cryogenics team made the decision to send the argon down as gas instead.

Routing the pipes containing liquid argon through a large bath of water will warm it up enough to turn it into gas, which will be able to travel down through a standard pipe. Re-condensers located underground act as massive air conditioners will then cool the gas until becomes a liquid again.

“The big advantage is we no longer have vacuum insulated pipe,” Montanari says. “It is just straight piece of pipe.”

Argon gas poses much less of a safety hazard because it is about 1000 times less dense than liquid argon. High pressures would be unlikely to build up and necessitate depressurizing stations, and if a leak occurred, it would not expand as much and cause the same kind of oxygen deficiency.

The process of filling the detectors with argon will take place in four stages that will take almost two years, Montanari says. This is due to the amount of available cooling power for re-condensing the argon underground. There is also a limit to the amount of argon produced in the US every year, of which only so much can be acquired by the collaboration and transported to the site at a time.

Once filled, the liquid argon detectors will pick up light and electrons produced by neutrino interactions.

Part of what makes neutrinos so fascinating to physicists is their habit of oscillating from one flavor—electron, muon or tau—to another. The parameters that govern this “flavor change” are tied directly to some of the most fundamental questions in physics, including why there is more matter than antimatter. With careful observation of neutrino oscillations, scientists in the DUNE collaboration hope to unravel these mysteries in the coming years.

James and other DUNE scientists will be looking to neutrinos for the mechanism behind this matter favoritism. Although the fruits of this labor won’t appear for several years, scientists are looking forward to being able to make use of the massive detectors, which are hundreds of times larger than current detectors that hold only a few hundred tons of liquid argon.

Currently, DUNE scientists and engineers are working at CERN to construct Proto-DUNE, a miniature replica of the DUNE detector filled with only 300 tons of liquid argon that can be used to test the design and components.

“Size is really important here,” James says. “A lot of what we’re doing now is figuring out how to take those original technologies which have already being developed... and taking it to this next level with bigger and bigger detectors.”