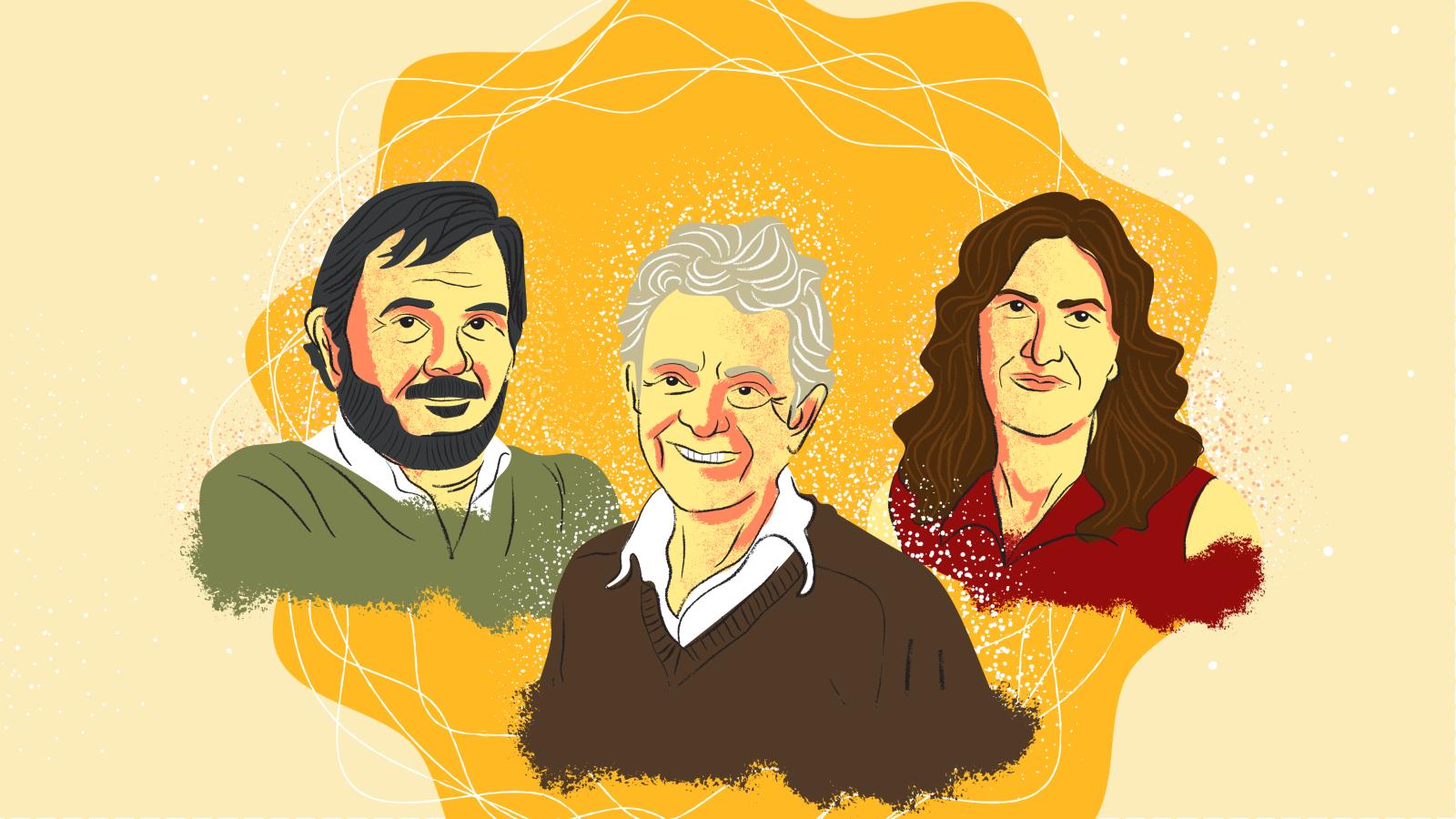 In March 1995, physicist Juan Pablo Negret picked up a microphone in a darkened room at a university in Colombia. He slid a transparency onto the overhead projector.

On the screen appeared the image of a paper, published just days earlier by the DZero experimental collaboration. It was the announcement of the co-discovery of a new fundamental particle, the top quark.

“Here you see a fraction of the authors in this article, and also a fraction of the institutions that are there,” he said. “I will not go into details. Just mention that it happens that, for alphabetical reasons, the University of los Andes was first.” He smiled, sending a chuckle through the audience.

He replaced the first transparency with a second, this one a photograph of the entrance to the main high-rise building at Fermi National Accelerator Laboratory. A line of flagpoles out front displayed the colors of nations represented at the research facility. Near the center of the image, between the flags of Canada and Germany, flapped a set of stripes in yellow, blue and red easily recognizable to the people in the room.

In the 1980s, the director of Fermilab, Leon Lederman, invited physicists from around Latin America to participate in frontier experimental particle physics research at the US lab.

Helping to bring Colombia into that group—not to mention getting his name and institution into the credits of the historic top quark discovery paper—were not easy for Negret. But with perseverance, he convinced Fermilab to give Colombia a chance. 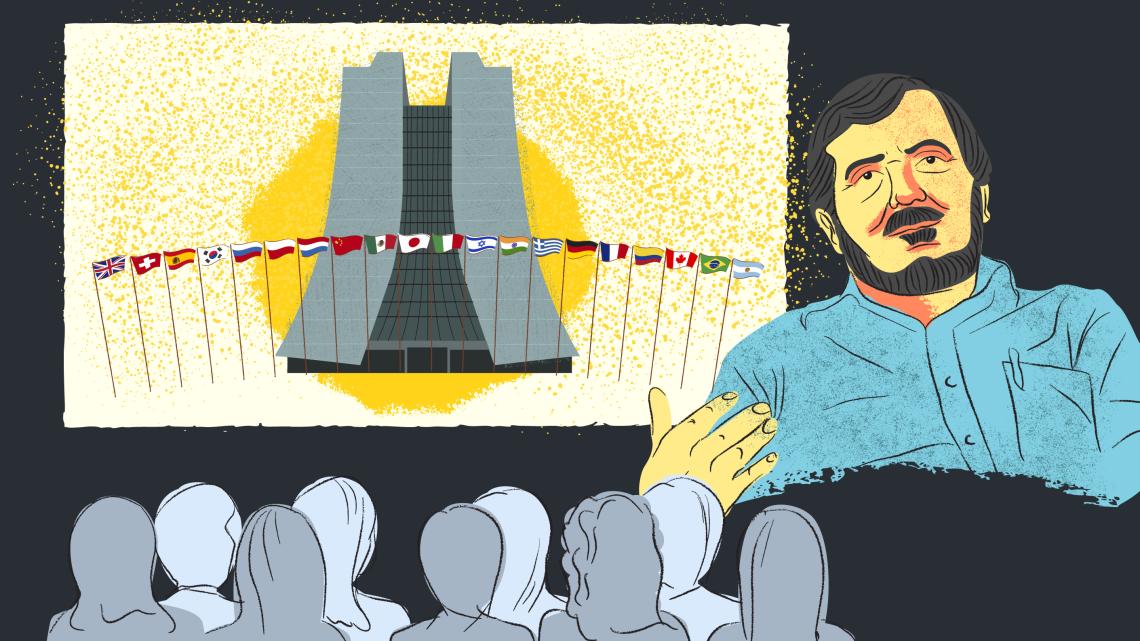 Lederman’s idea to reach out to Latin American physicists was inspired by another successful effort at international scientific cooperation. In 1960, Pakistani physicist and future Nobel Laureate Abdus Salam, then 34 years old, proposed creating an institute for theoretical physics open to scientists from around the world. Three years later he opened the International Centre for Theoretical Physics in Trieste, Italy, as its founding director.

The institute, which has a special focus on supporting advanced studies and research in developing countries, quickly established itself as an invaluable source of theoretical contributions to cosmology and high-energy physics.

Lederman thought Fermilab could provide the setting for a similar collaboration, this one focused instead on experimental physics research. He thought nearby Latin American research institutions would be ideal partners in the project.

At that time physics institutions in Latin America were working in particle physics theory, but few particle physicists at institutions in the region were involved in experiments. Lederman was confident that building inroads at universities, initially in Brazil and Mexico, would spur interest in partnering with Fermilab, and he asked Fermilab Assistant Director Roy Rubinstein to help develop these relationships.

In 1982 Lederman went to to Cocoyoc, Mexico, for what would be the first of several Pan-American symposiums on experimental physics. The next year he attended the second symposium in Rio de Janeiro. During each of his trips, he appealed to Latin American physicists to come to Fermilab.

Over the following decade, Fermilab secured grants from the US National Science Foundation and the US Department of Energy to provide supplies and library materials to universities and research institutions in Latin America interested in starting new experimental physics groups. In addition to the Pan-American symposiums, Rubinstein and Latin American scientists organized conferences and seminars to further raise the profile of experimental particle physics in the region.

As interest grew, physicists from around Latin America took Lederman up on his offer to support their transitions from theoretical physicists to experimentalists.

Lederman died in 2018, but the legacy of the program he began has endured in the physicists whose lives he affected, Rubinstein says. “I remember people getting PhDs from Latin American countries in the early 1980s who are now leading groups. And there are now world-class particle physics groups in several of these countries.” 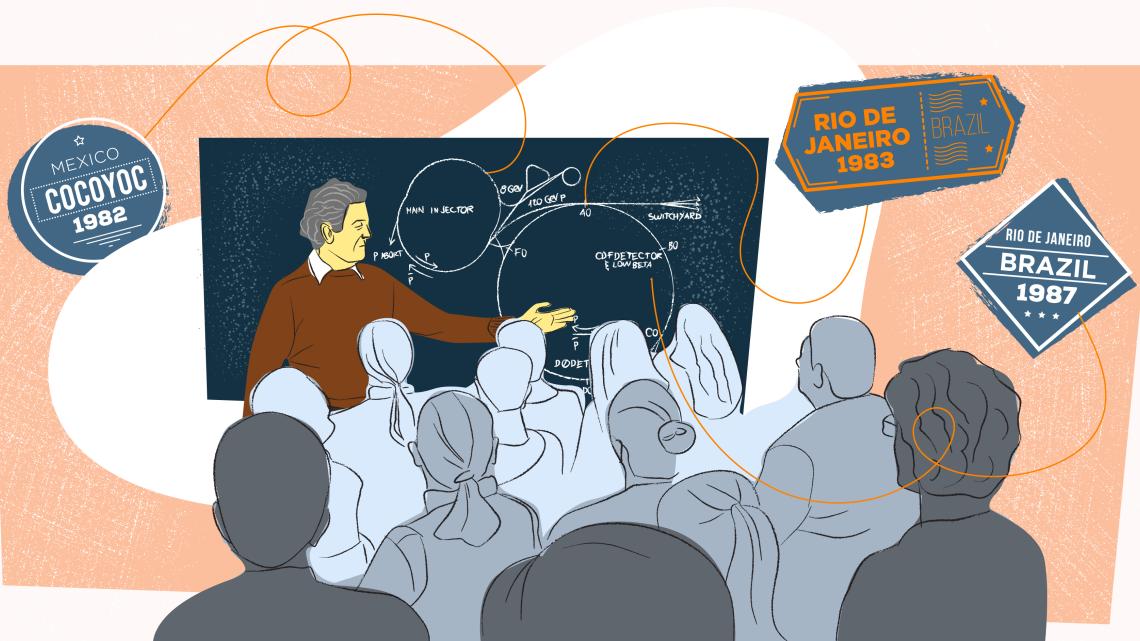 A trailblazer from Argentina

Cecilia Gerber, a high-energy physicist at the University of Illinois, Chicago, was one of the first students to arrive at Fermilab from Argentina.

In the early 1990s she had just completed her initial graduate work at the University of Buenos Aires and was looking for a place to earn her PhD. “Argentina was going through one of its periodic economic crises at the time, and so there were no opportunities for a fellowship that year,” Gerber says.

But Rubinstein contacted one of her mentors, a professor of high-energy physics, about Fermilab’s program. Gerber was at Fermilab within a year.

Gerber says Fermilab essentially let the visiting students choose where they would focus their contributions, and so she spent the first couple of weeks talking to various people and getting to know the institution.

She eventually joined the DZero experiment, where she studied W and Z bosons using the experiment’s muon detector. “This [research] was very novel, in the sense that we were measuring the properties of these particles, that had been discovered less than a decade earlier, but using a new accelerator at a new energy,” she says.

Although there were other Latin American students at Fermilab during her time there, Gerber and her husband, Victor Daniel Elvira (now a scientist at Fermilab), were the only Argentinians. Because they had studied British English at school, she says they initially struggled with American euphemisms. “Just basic stuff, like ‘What’s up?’ was something we had never heard before,” she says. “We would fail the safety quizzes just because we couldn’t understand the language on them.”

Beyond that, they found it difficult at first to explain their qualifications to their new colleagues, Gerber says. “When we came here, we didn’t know how to express that we had a master’s and were working on a PhD. The educational systems were very different. We had done quantum theory but had no experimental background beyond nuclear physics lab.”

With little institutional support from Buenos Aires, “essentially we relied on the goodness of people’s hearts at Fermilab” to help navigate their new careers far from home, she says. “It was tough, but it gave us a lot more independence than a regular student would have, which in retrospect ended up being a wonderful opportunity.”

Working with American advisors, Gerber and Elvira wrote their PhD theses in English. To defend their theses at home, though, they needed to write them once again—in Spanish.

Gerber, who now works on the CMS experiment located at the Large Hadron Collider at CERN, would go on to mentor subsequent generations of Argentinian students who were visiting Fermilab as part of the program, in part to help close the communication gap she had so painstakingly bridged as a student. 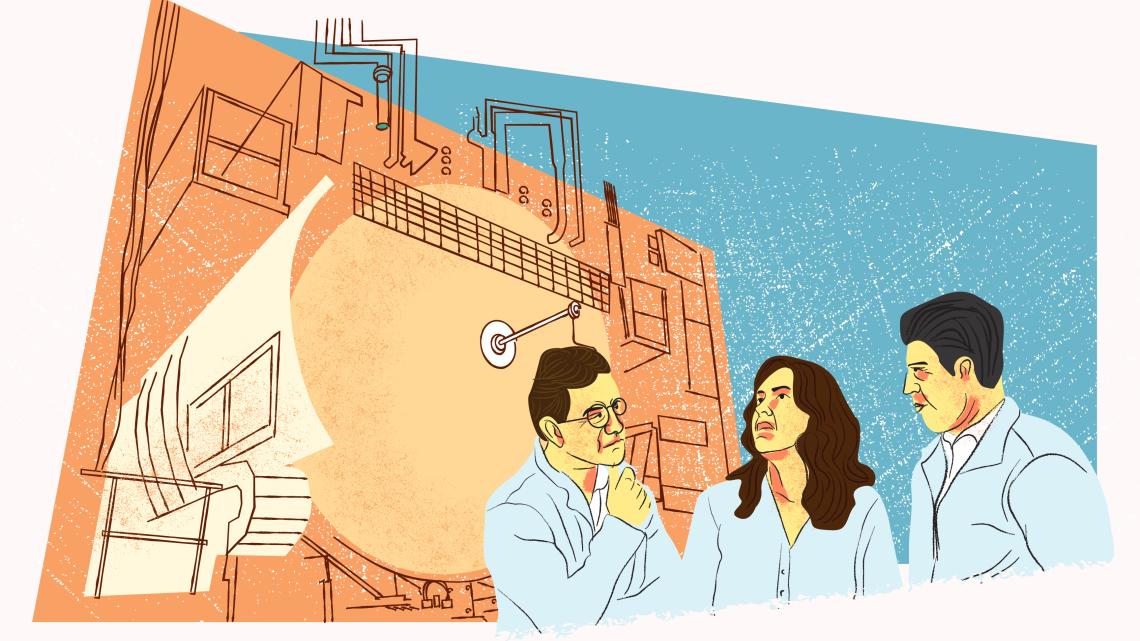 A new generation from Brazil

Hélio da Motta Filho was finishing his undergraduate studies at the Federal University of Rio de Janeiro in the early 1980s when the first cohort of Brazilian scientists returned from Fermilab. The newly minted experimental particle physicists started a research group in Brazil, and da Motta joined. In 1986, he traveled to Fermilab as part of a first generation of Brazilian graduate students there. His studies focused on the charm quark.

Working on cutting-edge physics at Fermilab was exciting, da Motta says. “It was a challenge, of course. It would have been much more comfortable to just stay in Rio and take classes in theoretical physics.”

Mexican physicist Alberto Sanchez Hernandez had a similar experience conducting research as part of the second generation of Mexican students to come to Fermilab.

Sanchez joined the program in 1993 and worked on the DZero experiment until 1997. “Of course I went,” he says. “For us [high-energy physics] was a completely new area of research.”

But moving to Batavia, Illinois—particularly in the middle of winter—presented challenges beyond a new area of research, he says. “It was February, and it was snowing. That was the first time I had seen snow,” he says. “I  didn’t have the right clothes for this weather!”

He would go on to acquire a collection of sweaters and study the B-quark.

In 1980 Negret met both Salam and Lederman at Fermilab. At the time Negret was a PhD student at Purdue University in Indiana, and he wanted to get his country more involved in experimental particle physics research.

“I told Lederman, what about Colombia?” Negret says.

Lederman didn’t think Colombia was ready to join the program, but Negret was insistent. He eventually convinced Lederman to introduce him to Rubinstein. In 1986 the two established a partnership between Fermilab and the International Center of Physics in Bogotá.

Negret returned to Colombia in 1989 and founded a new high-energy physics group at the University of los Andes. A pioneering collaboration in regional high-energy physics, it eventually became one of the most prominent in Latin America. It was one of three Latin American institutions mentioned in the DZero collaboration’s paper announcing the discovery of the top quark.

On the last day of March 1995, Colombian newscasters aired a report about the top quark, calling it the “most important discovery of recent years.”

“But most surprising,” the reporter introducing the segment said, “is that a group of Colombians participated directly in this finding.”

Back at Fermilab, the display of flags of participating institutions grew to include Argentina, Brazil, Chile, Colombia, Ecuador, Mexico and Peru. Today, the laboratory collaborates with scientists in more than 50 countries across the world.