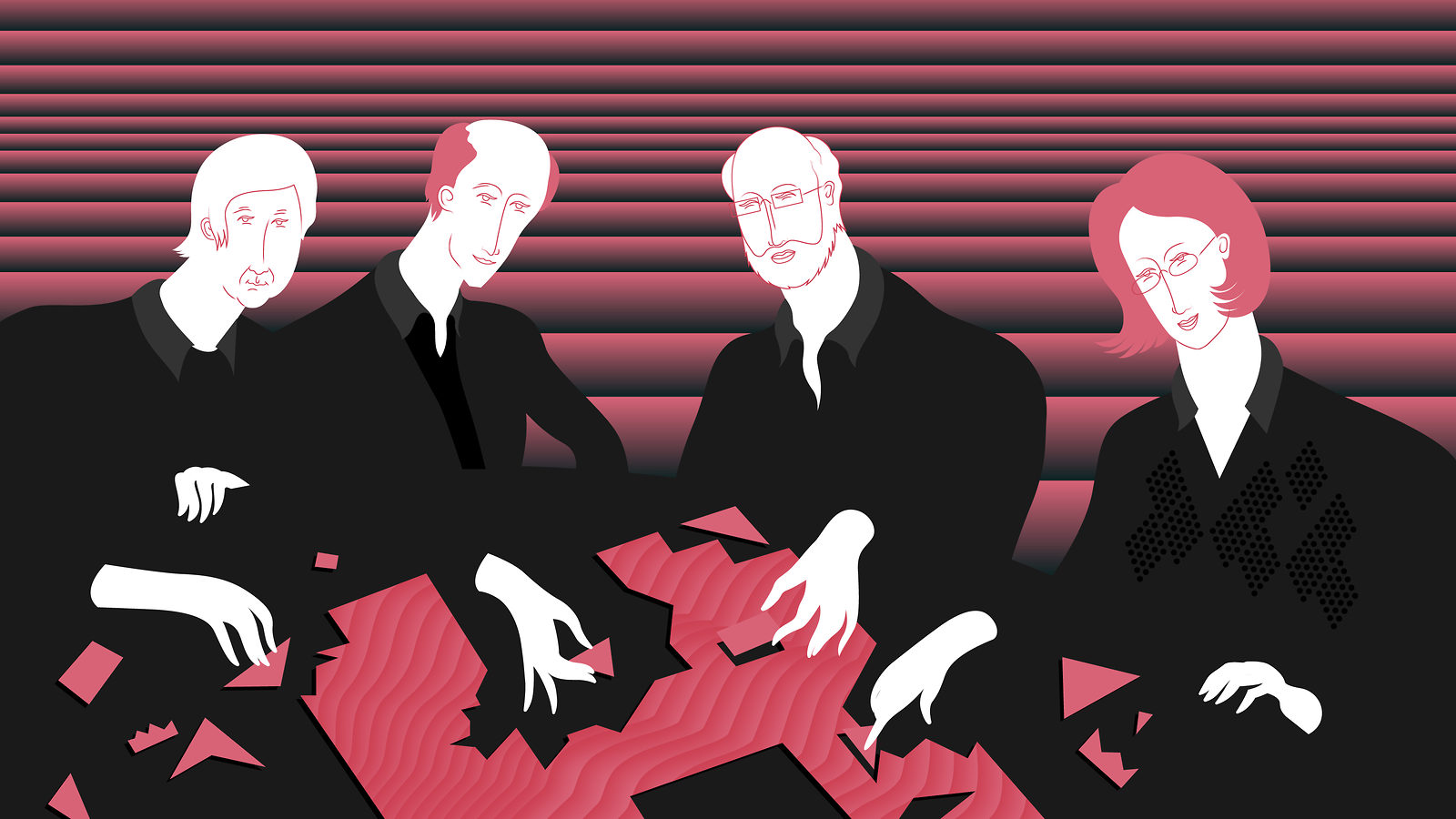 More than two decades before the discovery of the Higgs boson, four theoretical physicists wrote a comprehensive handbook called The Higgs Hunter’s Guide. The authors—Sally Dawson of the Department of Energy's Brookhaven National Laboratory; John F. Gunion from the University of California, Davis; Howard E. Haber from the University of California, Santa Cruz; and Gordon Kane from the University of Michigan—were recently recognized for “instrumental contributions to the theory of the properties, reactions and signatures of the Higgs boson” as recipients of the American Physical Society’s 2017 J.J. Sakurai Prize for Theoretical Physics.

They are still investigating the particle that completed the Standard Model, and some are hunting different Higgs bosons that could take particle physics beyond that model.

Dawson, Gunion and Haber recently attended the Higgs Couplings 2016 workshop at SLAC National Accelerator Laboratory, where physicists gathered to talk about the present and future of Higgs research. Symmetry interviewed all four to find out what's on the horizon.

What is meant by "Higgs couplings"?

The Higgs is an unstable particle that lasts a very short time in the detector before it decays into pairs of things like top quarks, gluons, and photons. The rates and relative importance of these decays is determined by the couplings of the Higgs boson to these different particles. And that's what the workshop is all about, trying to determine whether or not the couplings predicted in the Standard Model agree with the couplings that are measured experimentally.

Right, we can absolutely say how much of the time we expect the Higgs to decay to the known particles, so a comparison of our predictions with the experimental measurements tells us whether there's any possible deviation from our Standard Model.

For us what would be really exciting is if we did see deviations. However, that probably requires more precision than we currently have experimentally.

But we don’t all agree on that, in the sense that I would prefer that it almost exactly agree with the Standard Model predictions because of a theory that I like that says it should. But most of the people in the world would prefer what John and Sally said.

How many people are working in Higgs research now worldwide?

I did a search for “Higgs” in the title of scientific papers after 2011 on arXiv.org and came up with 5211 hits; there are several authors per paper, of course, and some have written multiple papers, so we can only estimate.

There are roughly 5000 people on each experiment, ATLAS and CMS, and some fraction of those work on Higgs research, but it’s really too hard to calculate. They all contribute in different ways. Let’s just say many thousands of experimentalists and theorists worldwide.

What are Higgs researchers hoping to accomplish?

There are basically two different avenues. One is called the precision Higgs program designed to improve precision in the current data. The other direction addresses a really simple question: Is the Higgs boson a solo act or not?  If additional Higgs-like particles exist, will they be discovered in future LHC experiments?

I think everybody would like to see more Higgs bosons. We don’t know if there are more, but everybody is hoping.

If you were Gordy [Kane] who only believes in one Higgs boson, you would be working to confirm with greater and greater precision that the Higgs boson you see has precisely the properties predicted in the Standard Model. This will take more and more luminosity and maybe some future colliders like a high luminosity LHC or an e+e- collider.

The precision Higgs program is a long-term effort because the high luminosity LHC is set to come online in the mid 2020s and is imagined to continue for another 10 years. There are a lot of people trying to predict what precision could you ultimately achieve in the various measurements of Higgs boson properties that will be made by the mid 2030s. Right now we have a set of measurements with statistical and systematic errors of about 20 percent.  By the end of the high luminosity LHC, we anticipate that the size of the measurement errors can be reduced to around 10 percent and maybe in some cases to 5 percent.

How has research on the topic changed since the Higgs discovery?

People no longer build theoretical models that don’t have a Higgs in them. You have to make sure that your model is consistent with what we know experimentally. You can’t just build a crazy model; it has to be a model with a Higgs with roughly the properties we’ve observed, and that is actually pretty restrictive.

Many theoretical models have either been eliminated or considerably constrained. For example, the supersymmetric models that are theoretically attractive kind of expect a Higgs boson of this mass, but only after pushing parameters to a bit of an extreme. There’s also an issue called naturalness: In the Standard Model alone there is no reason why the Higgs boson should have such a light mass as we see, whereas in some of these theories it is natural to see the Higgs boson at this mass. So that’s a very important topic of research—looking for those models that are in a certain sense naturally predicting what we see and finding additional experimental signals associated with such models.

For example, the supersymmetric theories predict that there will be five Higgs bosons with different masses. The extent to which the electroweak symmetry is broken by each of the five depends on their couplings, but there should be five discovered eventually if the others exist.

How have the new capabilities of the LHC changed the game?

We have way more Higgs bosons; that’s really how it’s changed. Since the energy is higher we can potentially make heavier new particles.

There were about a million Higgs bosons produced in the first run of the LHC, and there will be more than twice that in the second run, but they only can find a small fraction of those in the detector because of background noise and some other things. It’s very hard. It takes clever experimenters. To find a couple of hundred Higgs you need to produce a million.

Most of the time the Higgs decays into something we can’t see in our detector. But as the measurements get better and better, experimentalists who have been extracting the couplings are quantifying more properties of the Higgs decays. So instead of just counting how many Higgs bosons decay to two Z bosons, they will look at where the two Z bosons are in the detector or the energy of the Z bosons.

Are there milestones you are looking forward to?

Confirming the Standard Model Higgs with even more precision. The decay the Higgs boson was discovered in—two photons—could happen in any other kind of particle. But the decay to W boson pairs is the one that you need for it to break the electroweak symmetry [a symmetry between the masses of the particles associated with the electromagnetic and weak forces], which is what it should do according to the Standard Model.

So, one of the things we will see a lot of in the next year or two is better measurements of the Higgs decay into the bottom quarks. Within a few years, we should learn whether or not there are more Higgs bosons. Measuring the couplings to the desired precision will take 20 years or more.

Are there other things still to learn?

There are many possible connections between Higgs bosons, in a generic sense and the history of the universe. For example, it could be that a Higgs-like particle called the inflaton is responsible for the expansion of the universe. As a second example, generalized Higgs boson models could explain the preponderance of matter over antimatter in the current universe.