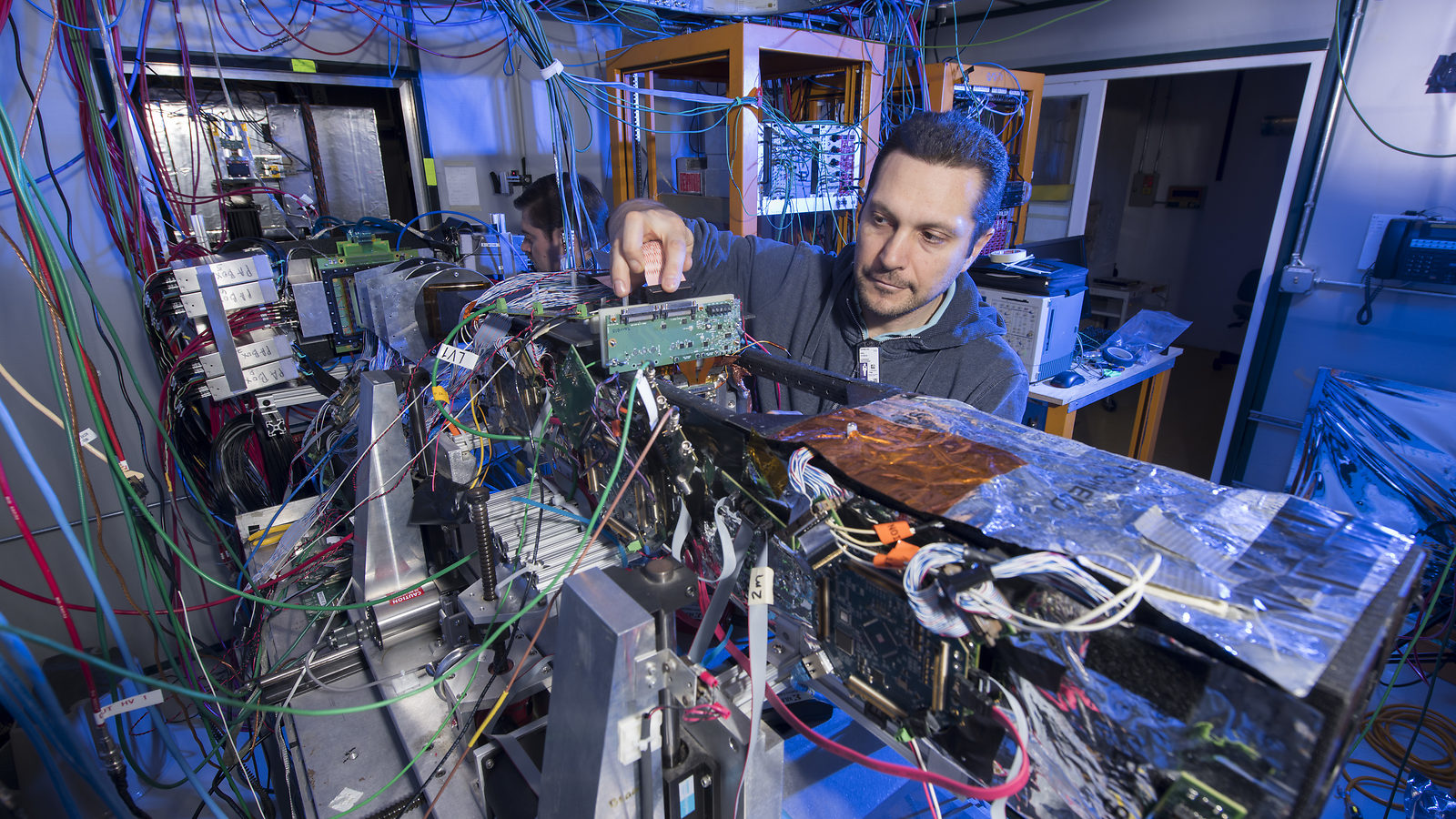 If building a modern particle physics experiment is a marathon, then visiting a test beam facility is the 100-meter dash. Over the course of just a few weeks, small teams work non-stop to gather as much data as they can about a piece of equipment they are thinking of installing in an experiment.

“It is stressful, but I think it’s super fun,” says Jessica Metcalfe, a researcher at Argonne working on upgrades for the innermost part of the ATLAS detector, one of the two major detectors at CERN that co-discovered the Higgs boson. “You’re all there squeezed together in the tiny control room, problem solving, all very focused on a very specific goal, and you learn a lot—really fast.”

Test beams generally sit to the side of full-on accelerators, sipping beam and passing it to the reconfigurable spaces housing temporary experiments. Scientists bring pieces of their detectors—sensors, chips, electronics or other material—and blast them with the well understood beam to see if things work how they expect, and if their software performs as expected. If things check out, they’re one step closer to being installed in a detector, and if not, it’s a chance to do some R&D, tinker and make things work.

“We’re typically testing pieces that are going into a larger experiment, but you’re also doing research on the detector technology, which is a form of research in itself,” Metcalfe says. “We’re not just getting ready to build something, we’re also learning a lot about the devices. There’s often many iterations of design and redevelopment.”

“It’s part of the lifecycle of any detector you build.”

Test beam visits are typically short, and getting time can be competitive because there are only a handful of places around the world that have high-energy particle beams available for testing. When it comes to hadrons—particles made of quarks—there are really just two: the Department of Energy’s Fermilab in the United States and CERN in Europe. Other test beams specialize in different particles, for example, electrons (at Germany’s DESY or California’s SLAC National Accelerator Laboratory) and photons (like at the Research Center for Electron Photon Science in Japan).

“It’s part of the lifecycle of any detector you build,” says Mandy Rominsky, who manages the Fermilab Test Beam Facility. “You start on a bench with an idea, and before you put something into a running experiment, you always put it in a test beam. You need to be able to characterize it, change it and go back and forth—and you can’t do that on a bench.”

Groups come with components of all shapes and sizes to the test beam. At the Fermilab test beam alone, researchers have tested teeny, tiny pieces of scintillator (the material that captures particles of light) and detector panels taller than people. Researchers come from many scientific fields, including nuclear physics, neutrino physics, collider physics, dark matter physics and astronomy. There are people working on general research and development without a specific experiment in mind, and ultra-specific tasks, like the crew working on turning smartphones into cosmic ray detectors. Still others are interested in learning how the materials they plan to put in a detector will change over time, especially in the harsh environment surrounding particle collisions.

Test-beam facilities try to keep useful experimental infrastructure on hand for visiting researchers: There are movable tables to pull equipment in and out, cooling systems and electronics, cables, different kinds of gas, cranes, and, of course, the beam itself, which often comes in many flavors of particles and energies. But some experiments need to bring in a little something extra, creating odd requests for facility managers—like when a visiting group from the IceCube experiment needed about 1000 gallons of deionized water to test their modules before similar detectors were shipped to the South Pole and entombed in the ice.

“It is surprisingly difficult to get that much deionized water,” Rominsky notes. “We couldn’t use a tanker and had to ship it in from Indiana in 55-gallon drums.”

And while most components will have only a short stay in the test beam, some facilities do have areas for longer-term experiments. For example, the LArIAT (Liquid Argon in a Test beam) detector lived its full existence in the test beam, collecting data for three years at Fermilab. Its goal was to better understand how particles interact with argon, the material now being used in massive neutrino detectors such as MicroBooNE and the international Deep Underground Neutrino Experiment hosted by Fermilab.

“I like that we help everybody,” Rominsky says. “It doesn’t matter which groups come to us. Our policy is to be very helpful to everyone.” 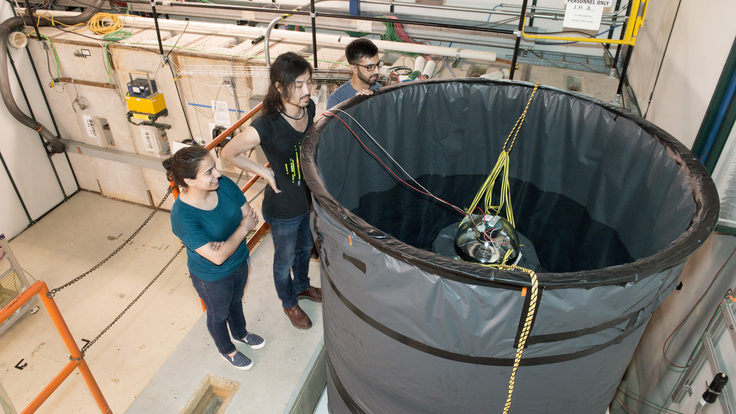 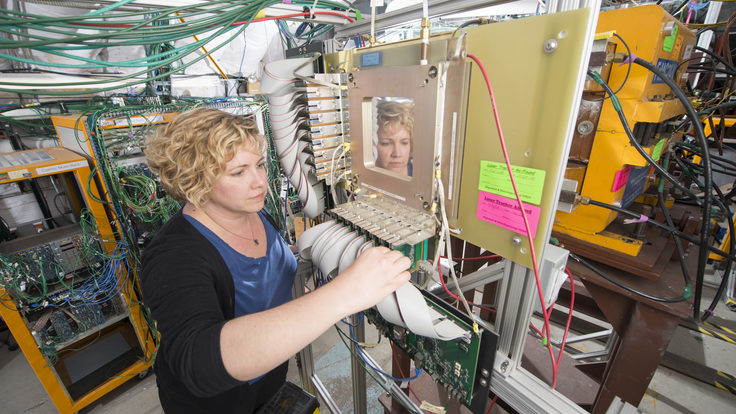 Test beams are not only important for detectors themselves—the test beam experience is also formative for the researchers who come to do the hands-on work. Teams work together over long hours, sharing both shifts and meals, ups and downs.

“For me, it was really communal,” says Clara Nellist, an ATLAS researcher at Radboud University in the Netherlands and former co-organizer of the annual Beam Telescope and Test Beams Workshop. “I learned so much from other people, even though we were from different universities and, in essence, we were competing.”

Nellist did her PhD thesis on proposed technology for the ATLAS pixel detector and spent many night shifts at the CERN test beam facility. Sometimes, groups working on a different proposed sensor intended for the same slot in the detector would share the same experimental setup. When the competing team didn’t have enough people to run their shifts, she volunteered to take data for them. A few months later, she unexpectedly found herself on their research paper for contributing to their data.

“We needed each other’s expertise,” Nellist says. “There are friends I made in the first week of my PhD who, 10 years later, I’m still friends with and check up on.”

The diverse nature of projects also means researchers from all different stages of their careers make their way through the test beam facility doors.

“You get people who are legends in the detector R&D community, and they need beam time like everyone else, and then there are undergrads having their first lab experience,” explains Aria Soha, an engineering physicist at Fermilab who managed the test beam facility until 2013. For those new to hardware testing—and even the more seasoned pros—it’s a thrill to watch those first particle tracks splash across the detector.

“I remember knowing when the beam was coming and watching the particles show up, and thinking, ‘This is cool, this is why I went to school for physics,’” Soha says.

Those moments of triumph often come after a stressful period of testing and debugging.

“You test everything in the lab before you go. Everything works perfectly and then you go [to the test beam] and nothing works,” Metcalfe says. “Checking the cables and turning things on and off solves about 80% of the problems.”

The granular, hands-on experience can make a big difference in understanding the results coming out of the detector later on. Visiting a test beam teaches researchers how particles are going through their detector, how they interact, how the data looks when it comes out, and much more. If researchers see a problem in their data analysis, they can recognize the potential causes more quickly, Metcalfe says. These are skills for the future of physics.

“There’s going to be a next generation of experiments, and people need to know how to design them and how to make that design motivated by the physics you want to do,” Metcalfe says. “It’s part of the training.”

Taking a page out of the jeans manufacturers' playbook, researchers use stonewashing machines to perfect equipment for a future International Linear Collider.

Using a new test-beam facility at SLAC, Stony Brook researchers are working to develop the next generation of cutting-edge particle detectors.

Around the US in 17 labs

Chart a course to knowledge with symmetry’s interactive map of all 17 US Department of Energy national laboratories.