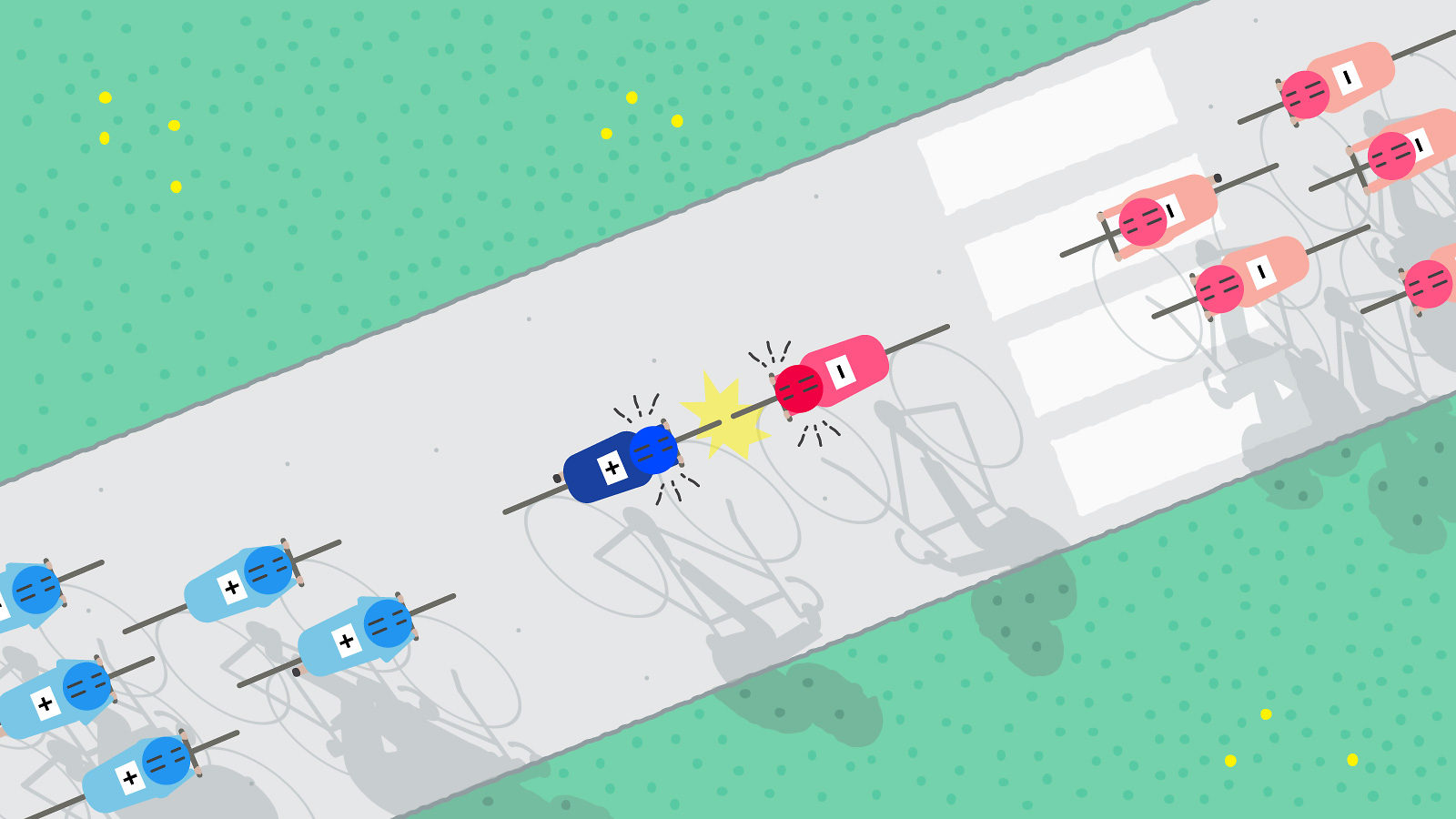 Matter is known to exist in four different states: solid, liquid, gas or—under circumstances such as very high temperatures—plasma. A plasma is an ionized gas, a gas with enough energy that some of its atoms have lost their electrons, and those negatively charged electrons are floating along with the now positively charged nuclei they left behind.

If you send two bunches of particles speeding through plasma about a hair’s width apart, the first creates a wake that feeds the second with energy. That’s the basic idea behind a powerful technology under development called plasma wakefield acceleration, which promises to make future particle colliders more compact and affordable.

The current most powerful particle accelerator in the world is the Large Hadron Collider, which measures about 17 miles in circumference and cost more than $4 billion to construct. To get higher-energy particle collisions that could further our understanding of nature’s fundamental building blocks, accelerators conventionally must increase in size and cost.

But plasma wakefield acceleration, also known as PWFA, could buck that trend. The technology has already been shown to significantly increase the energy gained by accelerated particles over shorter distances.

“With plasma wakefield acceleration, we are trying to do something analogous to making better computer chips—the phones in our pockets can now do the same thing that football fields of computers did before,” explains PWFA researcher Carl Lindstrøm from the University of Oslo.

A plasma wakefield accelerator could accomplish in just a few meters what it takes the copper linear accelerator at the US Department of Energy’s SLAC National Accelerator Laboratory 2 miles to do.

If successful, PWFA could dramatically increase the energy of a future linear collider in the same footprint, or make it possible to build a smaller collider. “It’s unlikely that you would build tons of these machines, because they consume a lot of power,” Gessner explains. “But if even one existed, it would be a big improvement over where we are today.”

The problem with positrons

Electron-positron colliders of the past produced numerous insights in particle physics, including Nobel Prize-winning discoveries of quarks, the tau lepton and the J/psi meson (co-discovered with scientists using a proton accelerator). These collisions are also preferred in the design of next-generation discovery machines, including plasma wakefield accelerators.

The problem is with positrons.

Whereas electrons can be accelerated as a tightly focused particle bunch in the plasma wake, positron bunches tend to lose their compact shape and focus in the plasma environment. PWFA scientists refer to this difference as asymmetry, and the latest research explores strategies for overcoming it.

“For electrons, plasma wakefield acceleration achieves the two things we need from it to build the machines we would like to build: They accelerate quickly and maintain their quality,” Lindstrøm says. “It’s just unlucky, really, that the same is not true for positrons, and that is the huge challenge we are facing.”

A conventional accelerator accelerates particles using radio-frequency cavities. RF cavities often look like series of beads on a straight line of string. Electromagnetic waves build up inside RF cavities so that they continuously flip from positive to negative and back again. Scientists send charged particles through the RF cavities, where they receive a series of pushes and pulls from the electromagnetic wave, gaining speed and energy along the way.

The accelerating wave in a conventional accelerator varies in a regular and predictable way, making it simple to place electrons or positrons in the right location to get a boost.

Plasma, on the other hand, creates what scientists refer to as a “non-linear” environment: one that is difficult to predict mathematically because there is no uniform variation.

“When you send a very strong beam into plasma, it’s going to cause something like a tsunami, making all your equations invalid,” Gessner explains. “It’s no longer simply perturbing the ocean, it’s completely remaking it.”

This non-linear plasma environment offers high acceleration gradients and focusing for electrons, but the effect on positrons is more perilous: While experiments have demonstrated acceleration of positrons in plasma, the quality of the beam cannot hold.

According to Gessner, there are two ways to approach the asymmetry challenge: “We can either embrace the asymmetry and see where it takes us—although this turns out to be very complicated. Or we can try to create symmetry, for example, by creating a hollow channel inside the plasma where focusing is no longer an issue.”

Learning from the roadblocks

During the past several years, scientists working at SLAC’s Facility for Advanced Accelerator Experimental Tests, or FACET, have done a series of studies on positron acceleration in plasma. In 2015, a team comprised of SLAC and UCLA researchers accelerated antimatter in a plasma wake using only one bunch of positrons. The tail of that bunch was fed by the wake created by the head.

Single-bunch positron acceleration could potentially be put to use in a plasma-based “afterburner” for existing or future RF accelerators. One plasma accelerator structure could be added onto the end of a linear accelerator to boost energy without having to make it much longer.

However, a complete PWFA accelerator would need to be built with many consecutive accelerator structures that require a separate trailing positron bunch.

SLAC’s Mark Hogan, who has been studying PWFA for more than two decades, explains: “With a single bunch you are losing in one half and gaining in the other. By the time you get through multiple plasma cells, there won’t be any particles left because you are always dividing the bunch in half. You’d have to start with an enormous number of particles.”

In October 2017, the researchers started investigating techniques that might work for multiple plasma cells and were able to accelerate a distinct bunch of positrons using PWFA.

“We used a strong, dense positron beam to accelerate a separate bunch of trailing positrons for the first time,” says first author of the paper in Nature Scientific Reports, Antoine Doche of Paris-Saclay University. “This was one important and necessary step for future colliders.”

In the same study the scientists showed they could accelerate positrons in a “quasilinear” wave, demonstrating that the driving bunch does not necessarily need to be positrons: Electrons or a laser driver could create a similar wake for the trailing positrons.

The study opens promising paths to explore the first approach, embracing the problem with positrons, though technical challenges persist.

“Colliders require particle beams with very specific properties,” Doche explains, “High charge, meaning a lot of particles in each bunch, and a small bunch size. When a positron beam drives a plasma wave, the wave evolves toward a nonlinear regime, all the more quickly as the charge of the bunch increases. One solution might be to more fully understand these positron-driven nonlinear waves.”

Rolling off a hill

In 2016, the research team eliminated the asymmetry issue by creating a narrow tube of plasma with neutral gas inside where the positrons stayed tightly focused as they flew through. That same research showed that the positron beam created an energetic wake that could accelerate a trailing bunch of positrons, and in the latest experiments the team achieved this two-bunch acceleration in what they call the “hollow channel.”

While the hollow channel approach avoids the problem of asymmetry, it brings its own obstacles.

“If the beam is not perfectly aligned in the tube, it will start to drift to the side that it is offset,” Lindstrøm says. “It’s like putting a ball on a hilltop—if it’s slightly to one side, it will roll off to that side. It’s an effect that we call the transverse wakefield, and it is something that has been seen in past accelerators as a weak effect. But here, because we have a very, very narrow plasma tube, the effect grows really fast. Our latest research measured and verified that the effect is very strong.”

When the positrons are deflected away from the axis through this effect, the beam is lost.

“The most recent studies verify where we currently stand, with this large challenge in front of us,” Lindstrøm says. “But in the process of getting there, we learned a lot about how this technology works.”

Gessner concurs, “We study the problem, we see how well we can make it work, and we identify the most challenging roadblocks. And then we go back to the drawing board.”

Despite the challenges, international momentum to achieve high-energy accelerators based on plasma is growing.

In research roadmaps, both the DOE and the International Committee for Future Accelerators have included positron acceleration in plasma as a goal for the next decade. Gessner and Sebastien Corde, a Paris-Saclay University PWFA researcher, are heading up a working group on positron acceleration in plasma that is tasked with making recommendations for the European Strategy for Particle Physics.

Since the earliest experiments, SLAC has been the only laboratory in the world with the infrastructure needed to provide positron beams for PWFA research. FACET operated from 2011 to 2016 as a DOE Office of Science user facility. And the DOE recently gave the green light to its upgrade, FACET-II, which is set to come online for experiments in 2020.

While FACET-II will initially operate with electrons only, its design allows for adding capability to produce and accelerate positrons in the future.

“We’re at a point where people are taking this knowledge that we’ve amassed in this field and figuring out what to do next. Can we take one of these approaches, like the hollow channel, and make it more forgiving?” Hogan says. “There are a lot of things for people to look at and study going forward.”