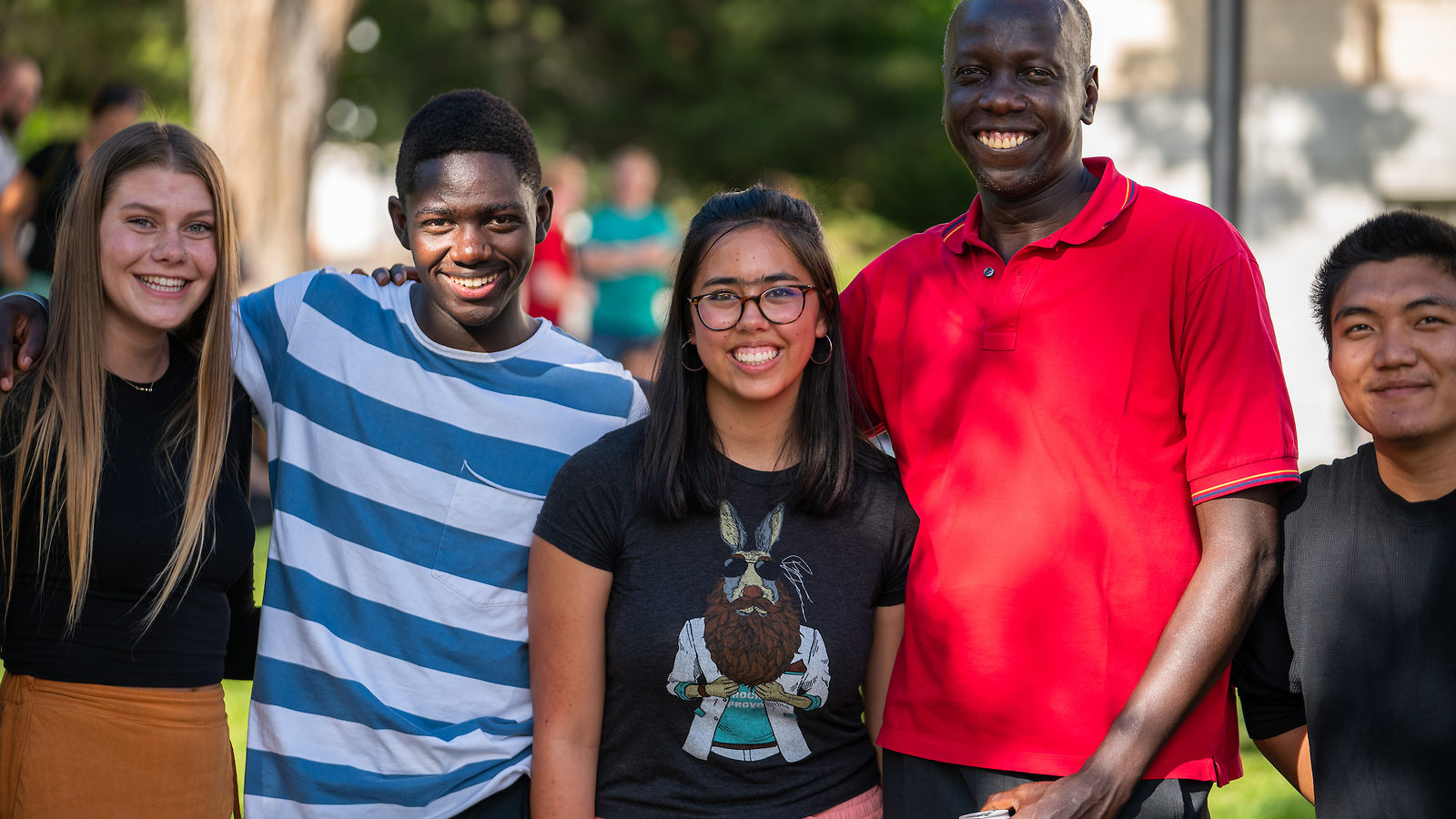 Fedrick Charles has wanted to go into the medical field ever since he can remember. Medicine, he says, runs in his family. His mother is a nurse, and he grew up watching her help people.

“I love working with people and giving back to the world,” Charles says. “Going into medicine and having the opportunity to work with patients and change human lives has always been something I’m passionate about. Just thinking about doing that makes my life feel full.”

If Charles’ mother created the path that led into medicine, a physicist from a similar background helped pave it.

The odds were stacked against Charles. He immigrated to Utah from his home country, Uganda, as a refugee when he was 9 years old to escape poverty and civil war in neighboring South Sudan. Refugee students like Charles face extra challenges when transitioning to the US education system, such as culture shock, language barriers and being placed in the wrong grade level.

These were issues that Tino Nyawelo, a theoretical physicist at the University of Utah, knew all too well, having fled South Sudan with his family when he was young to escape the war himself. Through the help and generosity of mentors, Nyawelo says, he was able to pursue his passion for physics, traveling to Italy and the Netherlands to complete his PhD and postdoc without having to pay a cent. 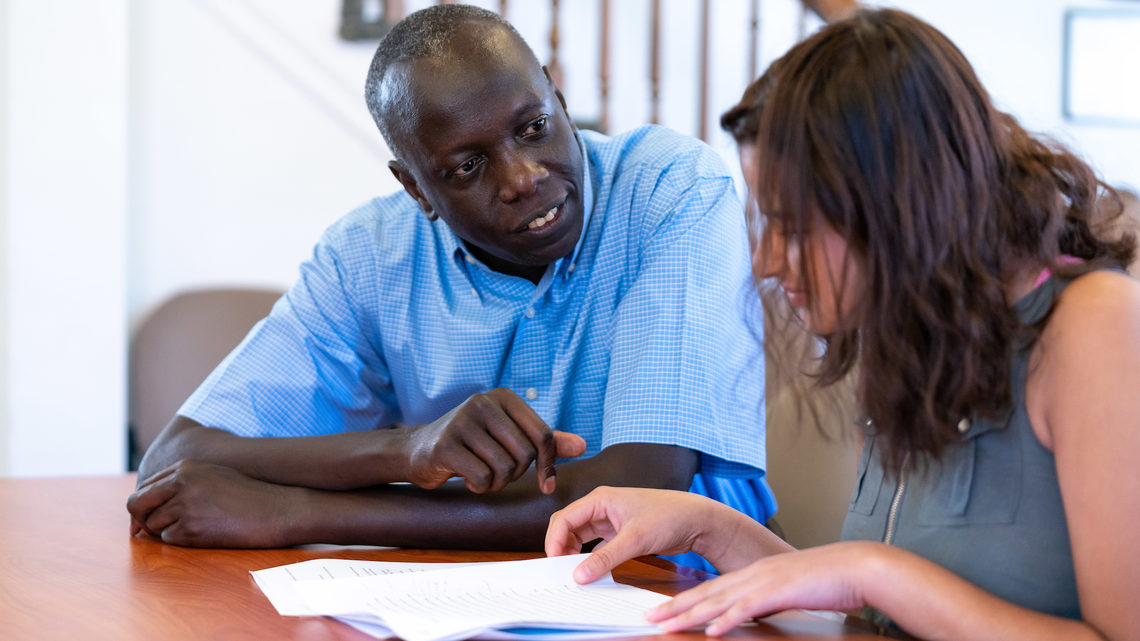 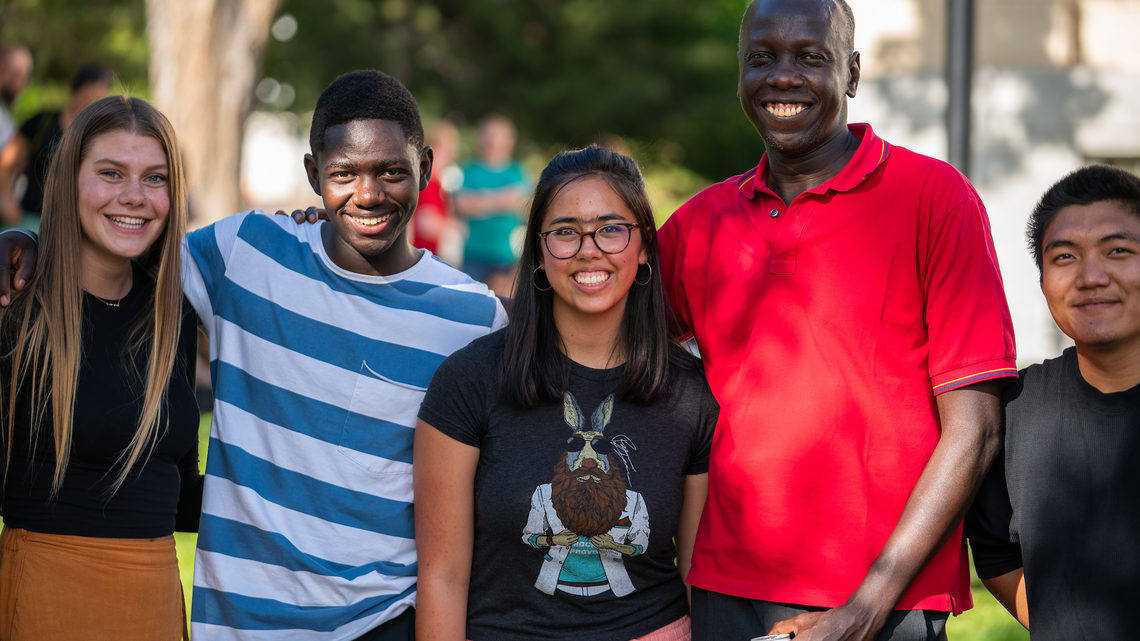 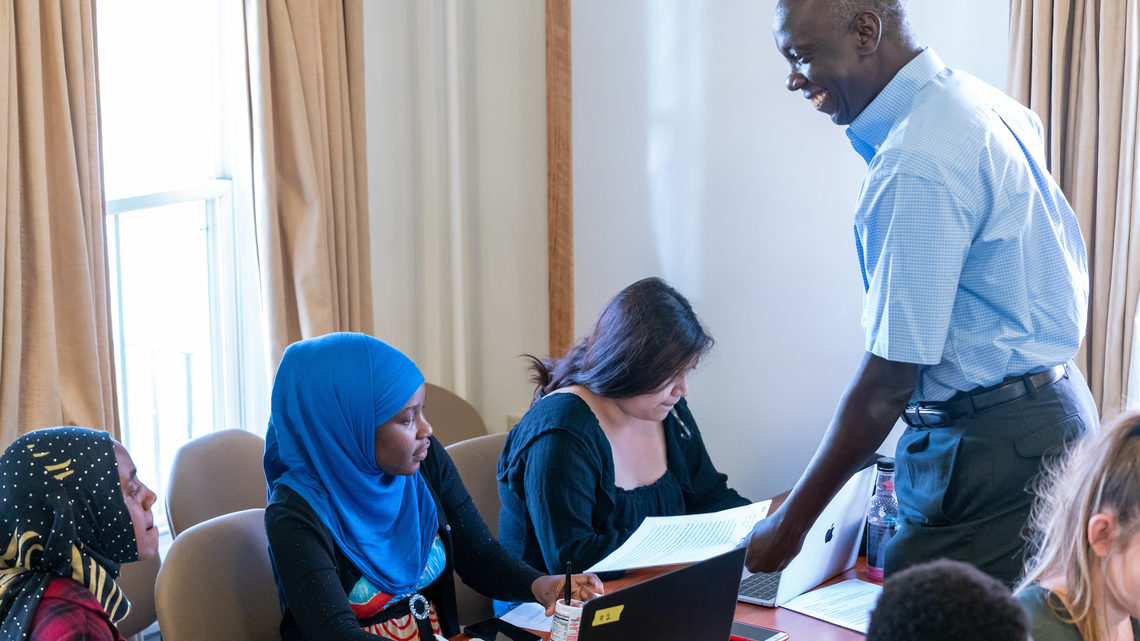 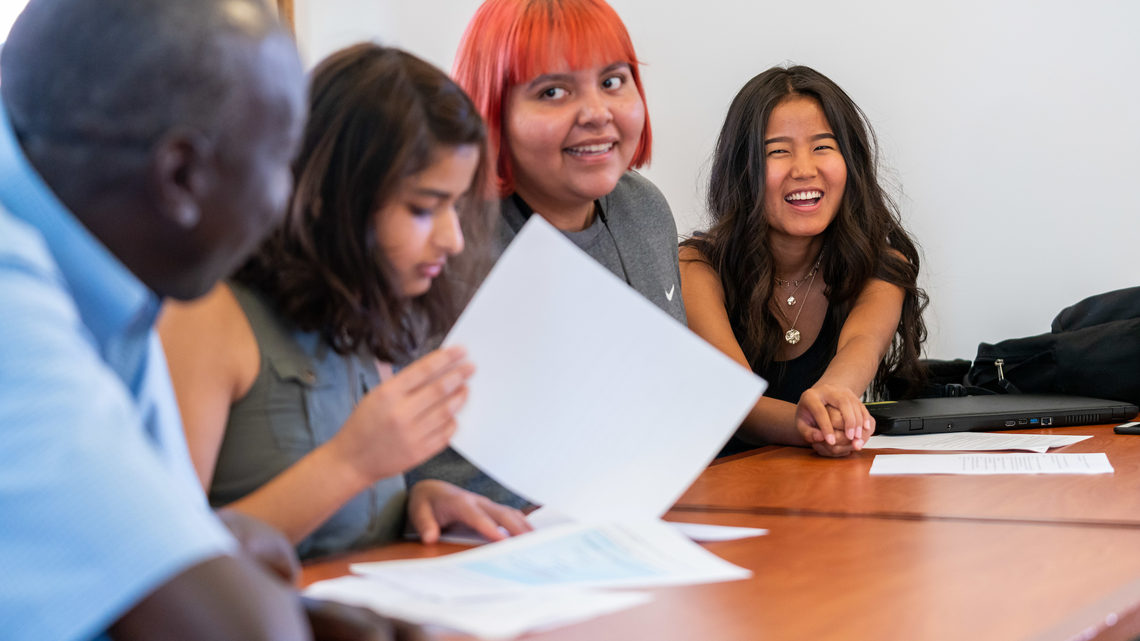 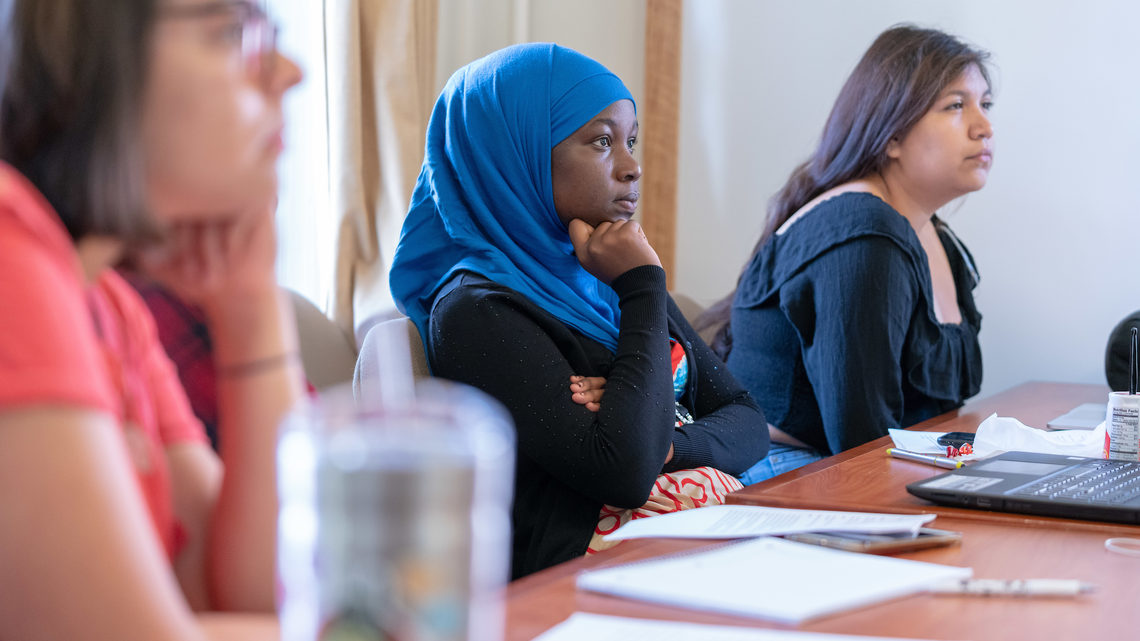 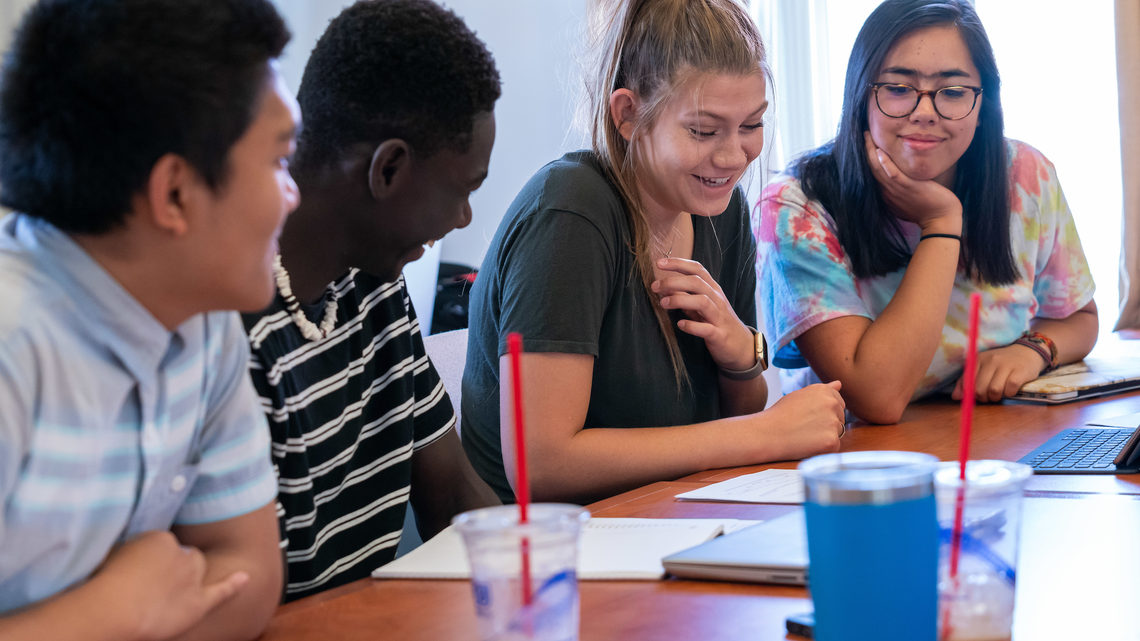 Courtesy of the University of Utah
Previous Next

When Nyawelo moved to Utah in 2007 after accepting a position at the university, he saw firsthand the troubles that young refugees faced in Salt Lake County, which is home to more than 65,000 refugees. As students tried to integrate into a new educational system, the additional hurdles they had to navigate often went unnoticed by teachers and administrators. Nyawelo says he watched as many of these students fell behind, often dropping out and finding support in gangs instead.

Inspired by the help he received during his journey to become a physicist, Nyawelo started an afterschool program in 2010 that would provide these students with valuable resources, such as individualized tutoring and mentoring, workshops to promote healthy living, STEM enrichment activities, and college and career guidance. Although the program, called Refugees Exploring the Foundations of Undergraduate Education in Science, or REFUGES, is focused on increasing diversity in STEM disciplines, the overall goal is to address the academic and cultural difficulties that refugee youth face in Utah.

The afterschool program, held annually at U of U, enrolls approximately 100 refugee and immigrant students in grades 7-12. About 30 people attend the program on any given day. More than 90 percent are minority students, with heavy representation from the Sudanese, Bhutanese, Congolese, Nepalese, Chadian, Ethiopian, Somalian, Iraqi, Sierra Leonean, South Sudanese, and Rwandan refugee communities.

“I received a lot of help while I was going through my education, and I wanted to offer that same support to other students going through similar experiences,” Nyawelo says. “Through REFUGES, I hope to provide a framework for student success by fostering a positive learning environment, a supportive peer group and cultural connections.”

Charles participated in the program as a freshman in high school, at first seeing it as simply a place to get away after school, hang out with friends and grab free food. Over time, Charles began to find a lot more value in it. Through the program, he was admitted to U of U, where he’s currently a freshman on a full-ride scholarship. He is pursuing a career in biomedical engineering, a field he was introduced to by one of his REFUGES mentors.

“My family didn’t have as much as many other families, and so I struggled for everything,” Charles says. “Early on I learned I would have to work for everything so that one day I could give back to my parents and provide for my family.

“I was surprised how much of the program really stuck with me. It kept me on track and taught me the basic skills that I would need to be successful. With those small skills, I was able to become a leader and a mentor and start contributing to my community.”

But Nyawelo didn’t want the program to end at high school. In 2012, he launched the REFUGES bridge program at U of U to provide incoming students from marginalized populations the opportunity to adjust to college life and prepare them for success in STEM. The summer before freshman year, the students live on campus for seven weeks, completing two STEM courses that count toward their undergraduate degree requirements. Throughout their freshman year, they can continue taking courses or completing internships.

The goal of the bridge program, Nyawelo says, is to address the underrepresentation of women, minorities and economically disadvantaged students in STEM disciplines.

“In theoretical physics, I’ve always been a unique person,” Nyawelo says. “When I was in classes or now when I go to conferences, I’m often the only Black person in the room. This really motivates me to find ways to increase minority representation in the sciences.”

Since the bridge program started, 56 students have participated, 42 of them female. Of these students, 19 have gone on to pursue a career in STEM.

Anahi Yerman and Brenda Garcia, both freshman at U of U, are two of these students. Yerman says she’s known she wanted to do something in science her entire life.

“I had always been interested in conducting my own experiments, whether it was a baking soda volcano or a twister in a bottle,” Yerman says. “I remember once, when I was little, I measured myself every single morning and night for months to see if I was really taller in the morning than I was at night.”

As Yerman absorbed more information about science, her passion shifted to different fields, touching on everything from meteorology to zoology to her current major, biochemistry.

Although Yerman’s parents are originally from California, she was born in Mexico and spent most of her childhood there and in New Zealand. Through the bridge program, Yerman hoped to become more familiar with the college campus and university experience and progress through her course load faster with individualized support. But another thing she appreciated about the program was how it gave students more of a “world view.”

“It promotes the idea of one community across different cultures and beliefs,” she says. “It’s amazing to learn about other cultures and how they all contribute to society.”

Garcia, a first-generation pre-nursing student whose parents emigrated from Mexico, says she’d been nervous to start a school and be so far from home. The bridge program helped her become more confident, independent and open, she says.

“It gives you the chance to experience college and get ready for it before you officially start,” she says. “It really helped us integrate into and be a part of the college community, connecting us with resources we might not have known about otherwise. I felt like I grew from a teenager to an adult in just a couple of months.”

This past summer, Yerman, Garcia and Charles, who is also a participant in the bridge program, had the opportunity to travel to the Bonneville Salt Flats and Antelope Island State Park, an island located within Utah’s Great Salt Lake. The students learned about the different species and ecosystems of the areas. At Antelope Island, the students shadowed a group of physics students who were conducting research to learn more about the lake and how much water it’s been losing.

“I had never seen that part of Utah, and I’ve lived here for most of my life,” Charles says. “It was a really cool exposure to a different side of where we live.”

Since 2012, REFUGES has provided educational activities that have positively changed the lives of over 800 refugees, women, minorities and economically disadvantaged students. Fifty percent of students who participated in the afterschool program were offered full ride scholarships; all of the seniors applied to one or more colleges and universities; and all have been admitted to U of U.

In the future, Nyawelo hopes to introduce more rigorous science activities into the program, particularly ones related to physics. One idea he has is to guide students through an activity with cosmic ray detectors, helping them build devices, learn programming and begin to work with real scientific data. He says he hopes that exposing refugees and other minorities to these physics and STEM activities will change the way they think about science.

“I want these students to succeed because one day we’ll rely on them,” he says. “Through these programs, I hope to not only build awareness of the challenges these students go through, but also to give them tools and confidence to pursue careers in STEM fields.”