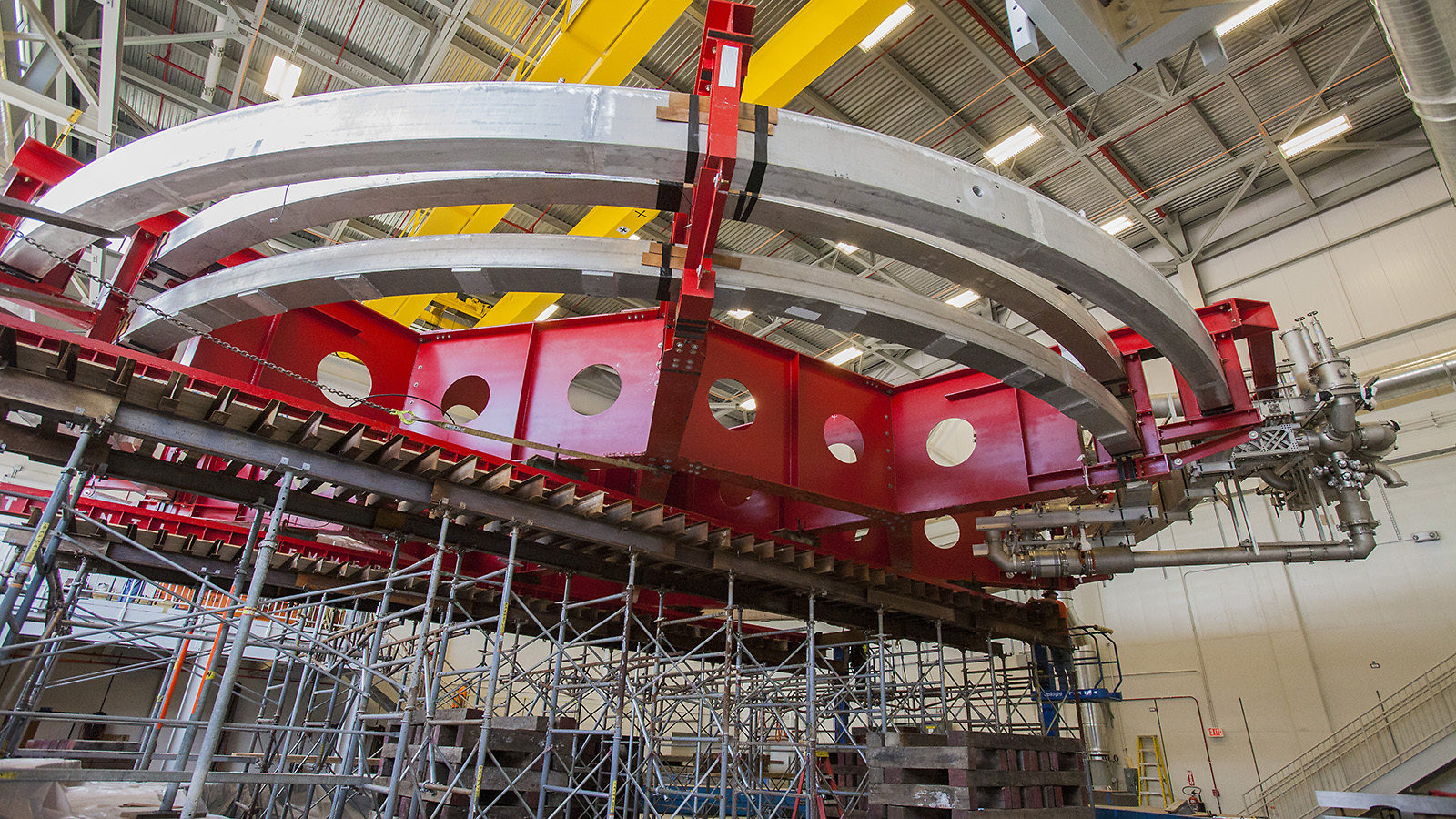 Three summers ago, a team of scientists and engineers on the Muon g-2 experiment moved a 52-foot-wide circular magnet 3200 miles over land and sea. It traveled in one piece without twisting more than a couple of millimeters, lest the fragile coils inside irreparably break. It was an astonishing feat that took years to plan and immense skill to execute.

As it turns out, that was the easy part.

The hard part—creating a magnetic field so precise that even subatomic particles see it as perfectly smooth—has been under way for seven months. It’s a labor-intensive process that has inspired scientists to create clever, often low-tech solutions to unique problems, working from a road map written 30 years ago as they drive forward into the unknown.

The goal of Muon g-2 is to follow up on a similar experiment conducted at the US Department of Energy’s Brookhaven National Laboratory in New York in the 1990s. Scientists there built an extraordinary machine that generated a near-perfect magnetic field into which they fired a beam of particles called muons. The magnetic ring serves as a racetrack for the muons, and they zoom around it for as long as they exist—usually about 64 millionths of a second.

That’s a blink of an eye, but it’s enough time to measure a particular property: the precession frequency of the muons as they hustle around the magnetic field. And when Brookhaven scientists took those measurements, they found something different than the Standard Model, our picture of the universe, predicted they would. They didn’t quite capture enough data to claim a definitive discovery, but the hints were tantalizing.

Now, 20 years later, some of those same scientists—and dozens of others, from 34 institutions around the world—are conducting a similar experiment with the same magnet, but fed by a more powerful beam of muons at the US Department of Energy’s Fermi National Accelerator Laboratory in Illinois. Moving that magnet from New York caused quite a stir among the science-interested public, but that’s nothing compared with what a discovery from the Muon g-2 experiment would cause.

“We’re trying to determine if the muon really is behaving differently than expected,” says Dave Hertzog of the University of Washington, one of the spokespeople of the Muon g-2 experiment. “And, if so, that would suggest either new particles popping in and out of the vacuum, or new subatomic forces at work.  More likely, it might just be something no one has thought of yet.  In any case, it’s all  very exciting.”

To start making these measurements, the magnetic field needs to be the same all the way around the ring so that, wherever the muons are in the circle, they will see the same pathway. That’s where Brendan Kiburg of Fermilab and a group of a dozen scientists, post-docs and students come in. For the past six months, they have been “shimming” the magnetic ring, shaping it to an almost inconceivably exact level.

“The primary goal of shimming is to make the magnetic field as uniform as possible,” Kiburg says. “The muons act like spinning tops, precessing at a rate proportional to the magnetic field. If a section of the field is a little higher or a little lower, the muon sees that, and will go faster or slower.”

Since the idea is to measure the precession rate to an extremely precise degree, the team needs to shape the magnetic field to a similar degree of uniformity. They want it to vary by no more than ten parts in a billion per centimeter. To put that in perspective, that’s like wanting a variation of no more than one second in nearly 32 years, or one sheet in a roll of toilet paper stretching from New York to London.

How do they do this? First, they need to measure the field they have. With a powerful electromagnet that will affect any metal object inside it, that’s pretty tricky. The solution is a marriage of high-tech and low-tech: a cart made of sturdy plastic and quartz, moved by a pulley attached to a motor and continuously tracked by a laser. On this cart are probes filled with petroleum jelly, with sensors measuring the rate at which the jelly’s protons spin in the magnetic field.

The laser can record the position of the cart to 25 microns, half the width of a human hair. Other sensors measure how far apart the top and bottom of the cart are to the magnet, to the micron.

“The cart moves through the field as it is pulled around the ring,” Kiburg says. “It takes between two and two-and-a-half hours to go around the ring. There are more than 1500 locations around the path, and it stops every three centimeters for a short moment while the field is precisely measured in each location. We then stitch those measurements into a full map of the magnetic field.”

Erik Swanson of the University of Washington is the run coordinator for this effort, meaning he directs the team as they measure the field and perform the manually intensive shimming. He also designed the new magnetic resonance probes that measure the field, upgrading them from the technology used at Brookhaven.

“They’re functionally the same,” he says of the probes, “but the Brookhaven experiment started in the 1990s, and the old probes were designed before that. Any electronics that old, there’s the potential that they will stop working.”

Swanson says that the accuracy to which the team has had to position the magnet’s iron pieces to achieve the desired magnetic field surprised even him. When scientists first turned the magnet on in October, the field, measured at different places around the ring, varied by as much as 1400 parts per million. That may seem smooth, but to a tiny muon it looks like a mountain range of obstacles. In order to even it out, the Muon g-2 team makes hundreds of minuscule adjustments by hand.

Stationed around the ring are about 1000 knobs that control the ways the field could become non-uniform. But when that isn’t enough, the field can be shaped by taking parts of the magnet apart and inserting extremely small pieces of steel called shims, changing the field by thousandths of an inch.

There are 12 sections of the magnet, and it takes an entire day to adjust just one of those sections.

This process relies on simulations, calibrations and iterations, and with each cycle the team inches forward toward their goal, guided by mathematical predictions. Once they’re done with the process of carefully inserting these shims, some as thin as 12.5 microns, they reassemble the magnet and measure the field again, starting the process over, refining and learning as they go.

“It’s fascinating to me how hard such a simple-seeming problem can be,” says Matthias Smith of the University of Washington, one of the students who helped design the plastic measuring robot. “We’re making very minute adjustments because this is a puzzle that can go together in multiple ways. It’s very complex.”

His colleague Rachel Osofsky, also of the University of Washington, agrees. Osofsky has helped put in more than 800 shims around the magnet, and says she enjoys the hands-on and collaborative nature of the work.

“When I first came aboard, I knew I’d be spending time working on the magnet, but I didn’t know what that meant,” she says. “You get your hands dirty, really dirty, and then measure the field to see what you did. Students later will read the reports we’re writing now and refer to them. It’s exciting.”

Similarly, the Muon g-2 team is constantly consulting the work of their predecessors who conducted the Brookhaven experiment, making improvements where they can. (One upgrade that may not be obvious is the very building that the experiment is housed in, which keeps the temperature steadier than the one used at Brookhaven and reduces shape changes in the magnet itself.)

Kiburg says the Muon g-2 team should be comfortable with the shape of the magnetic field sometime this summer. With the experiment’s beamline under construction and the detectors to be installed, the collaboration should be ready to start measuring particles by next summer. Swanson says that while the effort has been intense, it has also been inspiring.

“It’s a big challenge to figure out how to do all this right,” he says. “But if you know scientists, when a challenge seems almost impossible, that’s the one we all go for.”