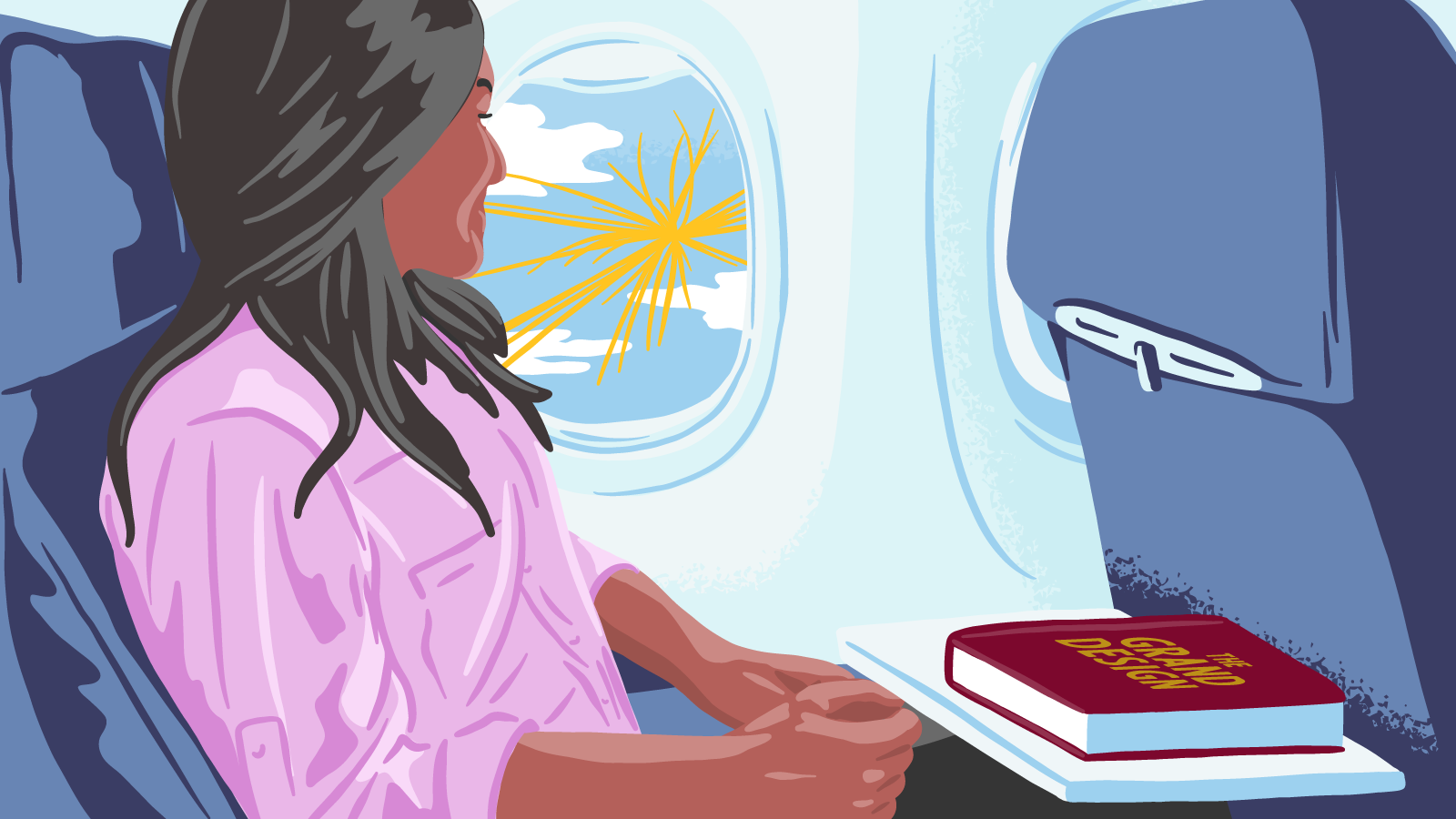 Sneha Dixit kept herself company during a 25-hour trip—by plane, train and taxi, from Bengaluru, India, to Chestertown, Maryland—with Stephen Hawking’s popular science book The Grand Design. She was on her way to join the class of 2024 at Washington College.

Dixit knew she wanted to study physics like Hawking. But it was not until she began her degree that she appreciated what the work of being a physicist was actually like.

“I’ve wanted to be a physicist for almost seven or eight years now,” she says. “And when I got to university, I realized physicists don’t just sit in front of textbooks and solve equations. They do research, that's how they find out stuff, that's what makes them physicists.”

That’s what Dixit wanted to do, too.

But most undergraduate students who get the chance to participate in experiments attend institutions that offer doctoral degrees and receive a high level of federal support for research. Dixit is at a small liberal-arts institution that mostly offers four-year degrees. Faculty at primarily undergraduate institutions like Washington College face a number of obstacles to providing research experience to their students.

Fortunately for Dixit, Washington College Physics Professor Suyog Shrestha found a way around those barriers, at least for a small group of students. With Shrestha, Dixit was able to analyze data from the ATLAS experiment at the Large Hadron Collider.

Physicists who participated in a planning process for the future of US high-energy physics—called Snowmass—recently championed efforts like these in a white paper, “Enhancing HEP research in predominantly undergraduate institutions and community colleges.”

To accomplish their goal of making research experience available to a wider range of undergraduate students, they wrote, they will need the support of college and university administrations, experimental collaborations and funding agencies. 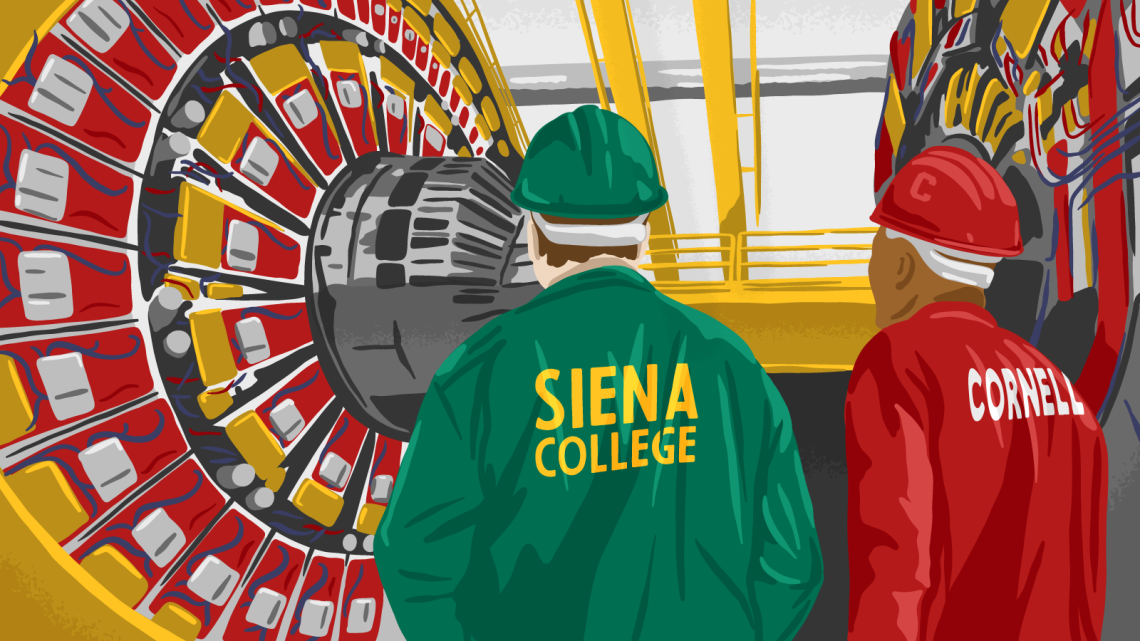 Conducting research is about learning how to find answers outside of a textbook, says Matt Bellis, an associate professor of physics at Siena College just outside Albany, New York.

When it comes to big questions like why the universe is mostly made up of matter and not antimatter, “you can’t just go to a book and look up how to solve it,” Bellis says. “You need to become creative about how you tackle these problems for which there’s no answer.”

Siena College is a private Franciscan college with a student body of just over 3,000 undergraduates. But Bellis makes sure his students have access to physics research.

For students who go on to earn graduate degrees in physics, that head start is important, Shrestha says. “High-energy physics is a very challenging field in the sense where it requires years of preparation before someone can be productive.”

Beyond bringing a student up to speed in an experimental collaboration, research experience can also make a career in physics seem more achievable. “I think I understand what physics is better than I used to,” says Josephine Swann, an undergraduate physics student at Siena. “I didn’t imagine it was so connected to so many other fields. I was very intimidated by physics before going into it, but it has been so much more accessible than I had hoped.”

Working with Bellis, Swann recently performed calculations related to a search for dark matter particles by the CMS experiment at the LHC. The experience introduced her to a wider research community than she knew existed.

“I’ve learned from so many people,” she says. “Physicists from projects at the LHC, my professors, other students, and people in non-physics fields like biology and chemistry have been so helpful. I had no idea how much went into a comprehensive calculation like [the one] I did, and ours is still full of uncertainties.

“I had just finished [introductory physics class] ‘General Physics I’ when I started working on this project, and I can’t even begin to say how much I’ve learned.”

Even students who do not continue to study physics can benefit from early exposure to scientific research, says Sudhir Malik, a professor of physics at the University of Puerto Rico-Mayaguez who worked on the Snowmass white paper. “Research is something that brings additional technology and additional skills, which are not part of the academic curriculum,” he says.

Faculty at Carnegie-classified research institutions and doctoral institutions are expected to spend the majority of their time on research, typically teaching two or fewer courses per year. Graduate students are responsible for instructing many undergraduate classes.

Faculty at primarily undergraduate institutions, by contrast, are expected to spend most of their time teaching, and they are evaluated based on their teaching ability. “Teaching is incredibly easy, unless you want to do it well,” Bellis says. “To teach well, you have to put time and effort into it.”

The larger class load that faculty at primarily undergraduate institutions are responsible for can make it difficult for them to travel to attend experimental collaboration meetings or to fulfill service responsibilities such as data-taking, detector maintenance or computer operations.

At research-focused institutions, graduate students and postdoctoral researchers support faculty. Supervising and mentoring them takes time and effort, but it also allows professors to delegate tasks.

By contrast, professors at institutions where there are no graduate students or postdocs must move at a slower pace. “If you really want to give the student a good experience, it takes time to teach the students the basics,” Bellis says. “And that time that you're teaching them, you could just be doing [the research] yourself.”

All of this leaves faculty at primarily undergraduate institutions at a disadvantage when competing against faculty at other institutions for funding needed to cover expenses like collaboration membership fees, pay for student researchers, and access to equipment and computing resources. 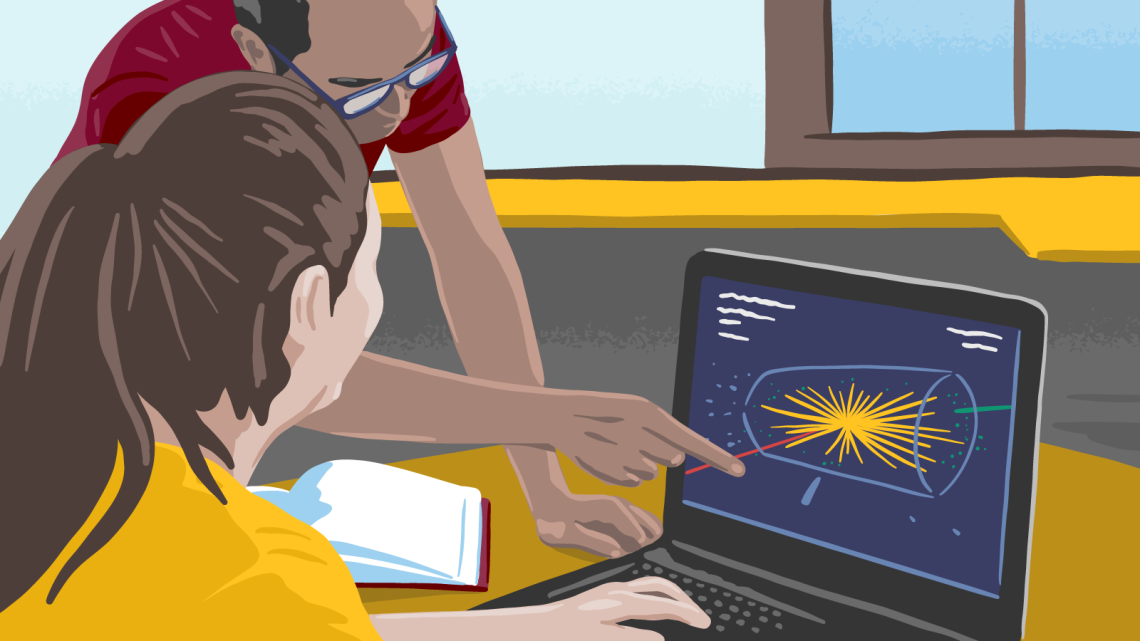 Siena College, for example, has joined forces with Cornell University, which provides the help of graduate students and postdocs, along with technical and administrative support and an already-established connection with the CMS experiment and its host laboratory, CERN.

Similarly, Shrestha, who is also an adjunct assistant professor at The Ohio State University, uses his connection with the larger institution to continue his research on the ATLAS experiment and bring in students from Washington College.

Physicists suggest in the Snowmass white paper that experimental collaborations could ease the burden on professors from smaller institutions by charging them less to participate, by offering different levels of membership, and by offering funding for travel. They could also allow faculty with heavier teaching loads to do service work remotely.

Funding agencies disallow professors from using grants to pay their institutions in exchange for relieving them of some of their teaching responsibilities. But allowing faculty with heavier teaching loads to do so would help professors at smaller institutions, the white paper says.

The US Department of Energy and National Science Foundation provide some financial support to faculty at primarily undergraduate institutions, Malik says.

NSF offers funding opportunities called Facilitating Research at Primarily Undergraduate Institutions, designed for schools that don’t have internal funding for research. DOE Office of Science provides funding for faculty and students from institutions historically underrepresented in research through the Visiting Faculty Program, which enables faculty to collaborate during the summer with scientific and technical staff at national labs. Starting in spring 2023, as part of the Office of Science RENEW initiative, the VFP program will offer terms in spring and fall terms as well.

For Dixit, who is on track to graduate early, in 2023, the opportunity has been transformative.

“This is something I wouldn't mind doing for the rest of my life,” she says. “And whatever hunch I had about wanting to be a physicist, it was right.”