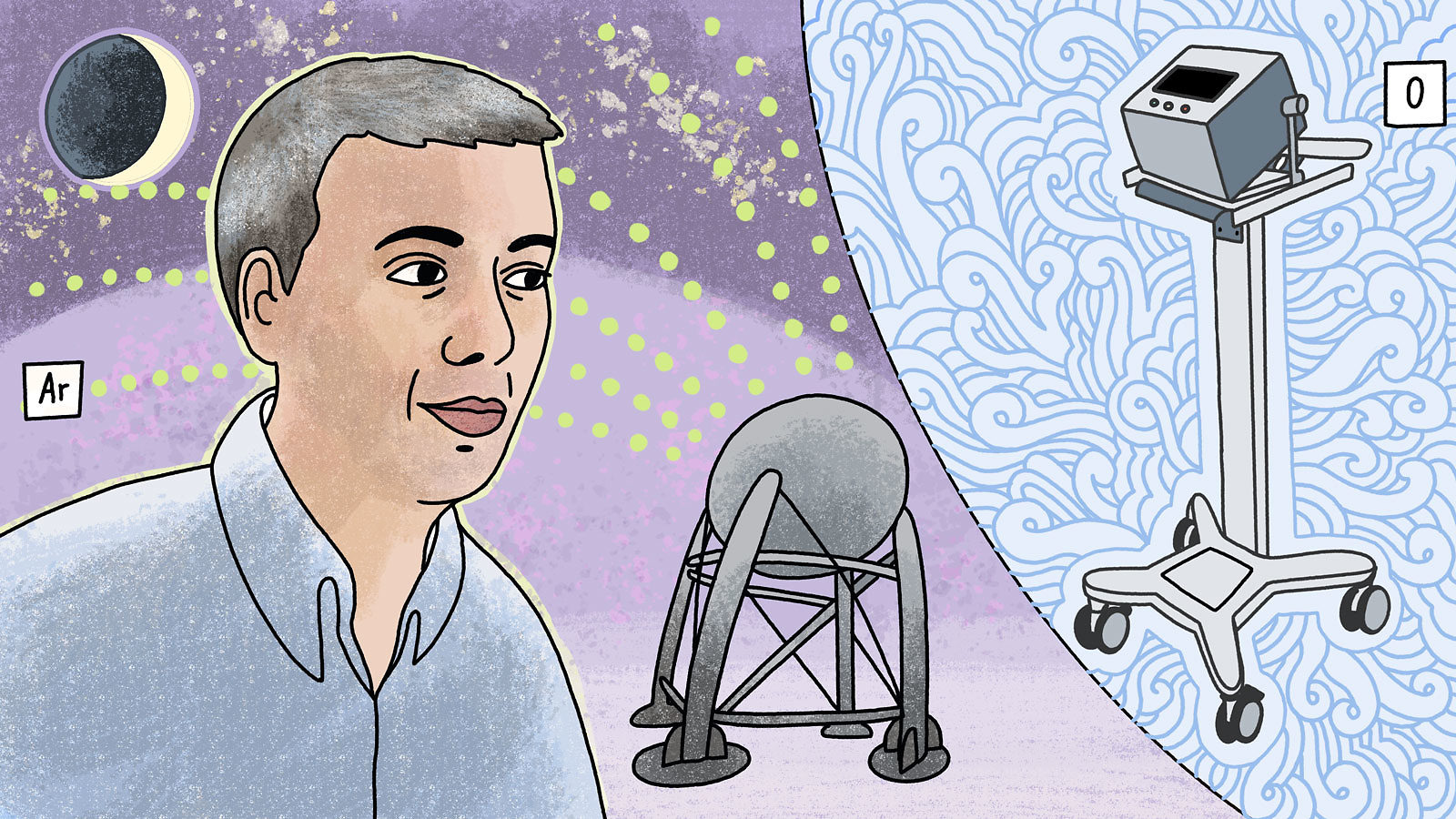 Physicist Cristiano Galbiati shifted focus from the search for dark matter to the shortage of ventilators for COVID-19 patients. The collaboration he began created an easy-to-manufacture ventilator in less than two months.

It was mid-March, and physicist Cristiano Galbiati was not where he expected to be. The professor at both Princeton University and Gran Sasso Science Institute was meant to be in Sardinia, thinking about the cryogenic distillation column he was building for the DarkSide-20k dark matter experiment. Instead he was in Milan, sheltering with his family and thinking about the 1842 novel The Betrothed.

Required reading for nearly every secondary school student in Italy, The Betrothed culminates with the 1629 Great Plague of Milan, which is thought to have killed a quarter of the population. Galbiati was far from the only Italian to think of the novel as the COVID-19 pandemic raged through every region and Prime Minister Giuseppe Conte placed the entire country under quarantine.

“The sense of crisis was very deep,” Galbiati says. “We were in utter disbelief. It’s something that I never thought I would experience in my lifetime.”

On March 19, he heard that a friend who owns a gas company had made a donation toward building a new hospital for COVID-19 patients. When he texted to congratulate him, the friend replied that the hospital was still without ventilators, needed to provide oxygen to COVID-19 patients with the most severe respiratory complications. The manufacturer they had tried to order from simply had received too many requests to fill them all.

Galbiati checked in with his brother, an emergency room physician, who said that his hospital, too, was struggling to keep up with the demand for ventilators.

“I said, ‘We need to do something about this,’” Galbiati says. “We have experience creating very complex systems with gases for particle physics. How can we continue and accept that people are in distress? We have the ability to develop and deploy systems for gently pushing oxygen into the lungs of patients.”

It wasn’t just talk. Two days later, he began building the collaboration that would eventually encompass more than 200 physicists, engineers and physicians around the world. In their spare time, this quickly assembled group developed and programmed a simple ventilator—called the Mechanical Ventilator Milano—made with off-the-shelf parts that could easily be manufactured and run with just oxygen and electricity. Within weeks they had a working prototype. On May 1, they received approval from the US Food and Drug Administration.

“A project like this has never been done before, on this time scale,” Galbiati says. “It would not have been possible under normal circumstances, but everyone was determined to have it move fast. The sheer will and determination of everyone involved—even working pro bono—made this so successful.” 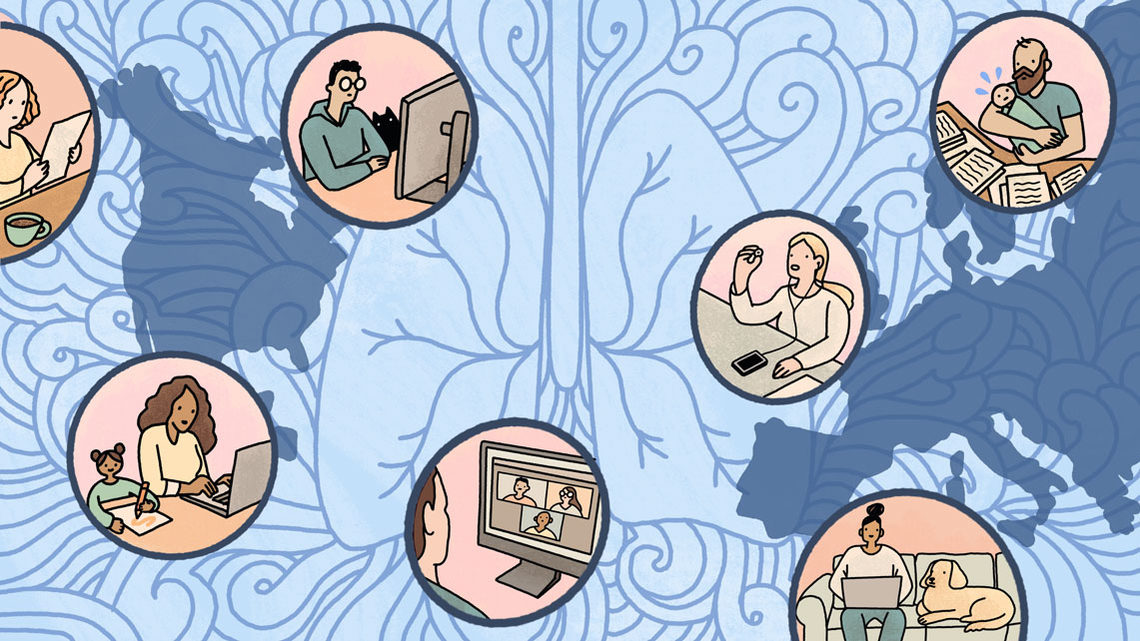 Bringing together some of the top minds in physics

One of the first to answer Galbiati’s call to join the project was Fernando Ferroni, a professor at Gran Sasso Science Institute and past president of Italy’s National Institute for Nuclear Physics, INFN. Ferroni had known Galbiati for a long time: Galbiati often came to Ferroni with new ideas—for building cryogenic distillation column for the DarkSide detector, for example—and Ferroni often helped him find funding to make those ideas a reality.

“He has a mind of sometimes crazy, sometimes very good ideas,” Ferroni says. “I knew he would be really good at finding the aspect of his research that could be translated into something useful for society.”

Galbiati also rang Nobel laureate Art McDonald, who then called up his colleagues at national labs across Canada and asked who would be willing to pitch in. “We got a tremendous immediate response from TRIUMF, CNL Chalk River, SNOLAB and the McDonald Institute,” McDonald says.

The idea made it to national labs in the United States, as well. Elena Gramellini, a Lederman Fellow at the US Department of Energy’s Fermi National Accelerator Laboratory, says she received a link to a video conference call on which the project would be discussed.

“It was a Tuesday morning, and I was feeling frustrated and useless,” she says. She hopped on the call; she says it was chaotic but positive, with dozens of people trying to connect and volunteer their personal time to pitch in. Through it all, Gramellini recognized McDonald’s name. When he spoke, Gramellini felt a sense of hope.

“There was a Nobel Prize winner on the call!” she says. “And he was so excited, talking about connecting with doctors across Canada. And who am I? I’m just a postdoc. But I felt very ready to do something very quickly.”

The group quickly divided into subgroups. They handed out specific tasks and set up videoconferencing calls throughout the day. Because collaborators came from Europe and North America, chances were good that at any hour, someone was working on the project.

For physicists, the set-up felt natural: Many large physics experiments involve scientists from around the world, working together remotely. Although most of them had no experience designing or programming medical devices, Gramellini says they felt they had the flexibility and curiosity to make it happen.

“We have this courage to go ahead and think creatively about solutions,” she says. “We’re not scared of not knowing how to do something. We just try to do it.”

They had a lot to learn. The body needs about 15 breaths per minute, but the lungs are delicate, so the ventilator needed to be simultaneously very powerful and very gentle. The ventilator needed to have at least two modes of ventilation, to care for patients with different needs, and it needed to be user-friendly enough to be operated consistently and safely by doctors and nurses in a clinic.

The term “trigger,” in physics, means the beginning of a new action. In the context of caring for COVID-19 patients, it means the beginning of a new breathing cycle. In physics, “sensitivity” means how well something is measured, but in the world of ventilator design, it refers to how easily the patient can activate the ventilator to deliver a breath.

The physicists found that medicine can be a mix of science and art; the data in medicine often isn’t so cut and dried. For example, physicists are used to looking at wave forms on a chart and determining whether a peak or valley is a signal of something or not, Raaf says. But in medicine, peaks and valleys can signify many gradations of patient discomfort or distress.

The physicists learned, though; physicians weren’t shy about offering their opinions, Raaf says. “Medical doctors are even more willing to disagree with you than physicists are,” she laughs. “That was most surprising.”

Above all, everyone had a sense of urgency to get everything right, Gramellini says.

A chance to make a difference

Many physicists say they never thought they would be working on a project like this one. Ferroni says that when he was president of the INFN, he often traveled to events and schools to explain what physicists do. Without fail, he says, someone would ask how physics could directly benefit society.

“In the beginning, I was annoyed,” he says. Shouldn’t learning more about the universe be enough?

Still, he would explain that physics has had a hand in many applications outside of physics, such as the development of MRI machines and accelerators that can target cancerous tumors. “But I never worked on anything like that myself,” he says. “I’m very proud to have this opportunity toward the end of my career.”

McDonald, too, says a project like this “wasn’t in my plans. But COVID-19 has changed a lot of people’s plans. I’m very pleased to be working on it.”

Innovating across borders, for the whole world

Researchers started testing the prototype on breathing simulators in Italy in April. US FDA approval came in May. The group is now raising money to manufacture the machines and has released the designs so that anyone in the world can create one at roughly half the cost of a normal ventilator, which McDonald says will be important as the virus catches its stride in developing countries.

“Borders are invisible when it comes to the exchange of information,” McDonald says. “There are going to be substantial needs going forward for an easy-to-construct device. We think this could contribute positively to helping people in the long term.”

Galbiati is still spending his time, days and evenings, in an unexpected place—just outside Milan at the headquarters of the company Elemaster, which will manufacture the ventilators. The ventilator group is working on a second iteration of the design and is open to new collaborators.

Gramellini says she is grateful for the opportunity to participate in an open-source and border-crossing project like this one.

“This is an example of how you can collaborate internationally and create something amazing,” she says. “It shows that humans can interact in this way. It’s not anyone’s ventilator. This shows how international solutions can be found.”