An international partnership to upgrade the LHC has yielded the strongest accelerator magnet ever created. 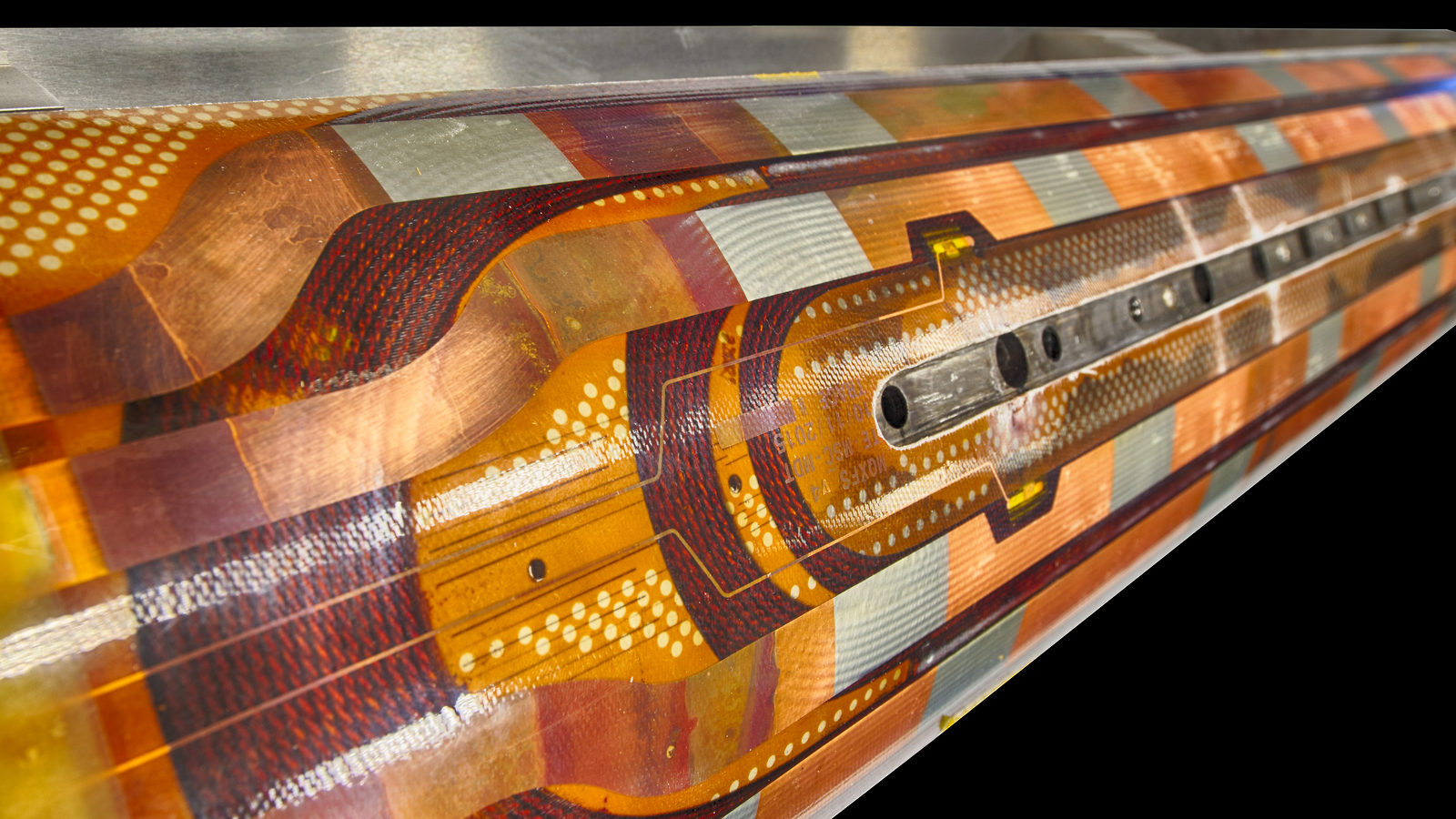 The next generation of cutting-edge accelerator magnets is no longer just an idea. Recent tests revealed that the United States and CERN have successfully co-created a prototype superconducting accelerator magnet that is much more powerful than those currently inside the Large Hadron Collider. Engineers will incorporate more than 20 magnets similar to this model into the next iteration of the LHC, which will take the stage in 2026 and increase the LHC’s luminosity by a factor of ten. That translates into a ten-fold increase in the data rate.

“Building this magnet prototype was truly an international effort,” says Lucio Rossi, the head of the High-Luminosity (HighLumi) LHC project at CERN. “Half the magnetic coils inside the prototype were produced at CERN, and half at laboratories in the United States.”

This 1.5-meter-long model, which is a fully functioning accelerator magnet, was developed by scientists and engineers at Fermilab, Brookhaven National Laboratory, Lawrence Berkeley National Laboratory, and CERN. The magnet recently underwent an intense testing program at Fermilab, which it passed in March with flying colors. It will now undergo a rigorous series of endurance and stress tests to simulate the arduous conditions inside a particle accelerator. 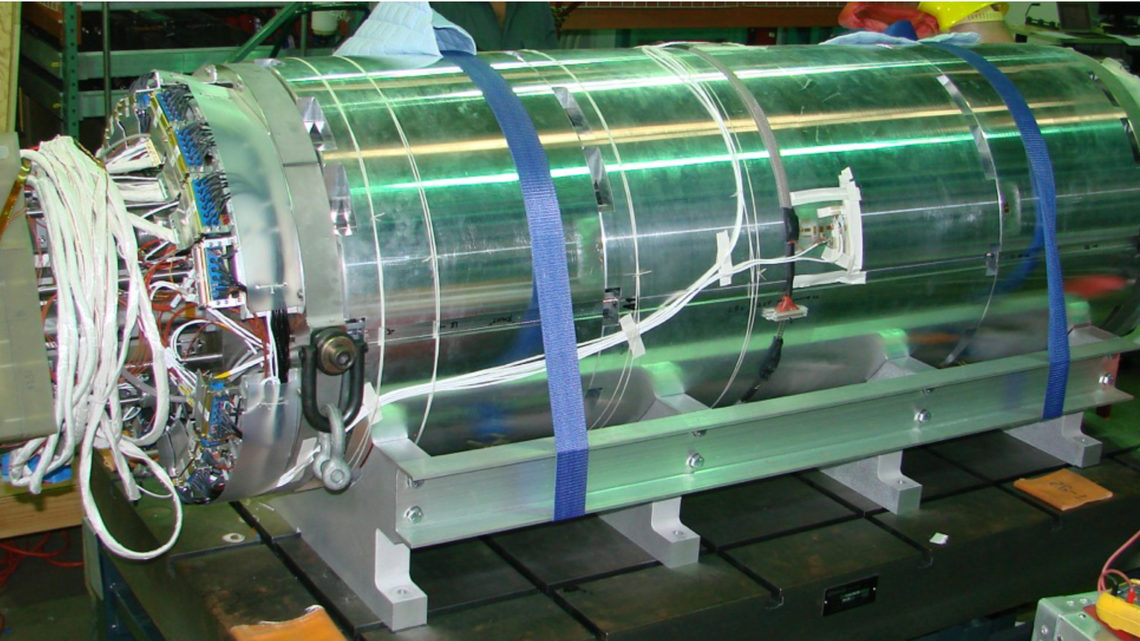 The 1.5-meter prototype magnet, the MQXF1 quadrupole, sits at Fermilab before testing.

This new type of magnet will replace about 5 percent of the LHC’s focusing and steering magnets when the accelerator is converted into the High-Luminosity LHC, a planned upgrade which will increase the number and density of protons packed inside the accelerator. The HL-LHC upgrade will enable scientists to collect data at a much faster rate.

The LHC’s magnets are made by repeatedly winding a superconducting cable into long coils. These coils are then installed on all sides of the beam pipe and encased inside a superfluid helium cryogenic system. When cooled to 1.9 Kelvin, the coils can carry a huge amount of electrical current with zero electrical resistance. By modulating the amount of current running through the coils, engineers can manipulate the strength and quality of the resulting magnetic field and control the particles inside the accelerator.

“We’re dealing with a new technology that can achieve far beyond what was possible when the LHC was first constructed,” says Giorgio Apollinari, Fermilab scientist and Director of US LARP. “This new magnet technology will make the HL-LHC project possible and empower physicists to think about future applications of this technology in the field of accelerators.” 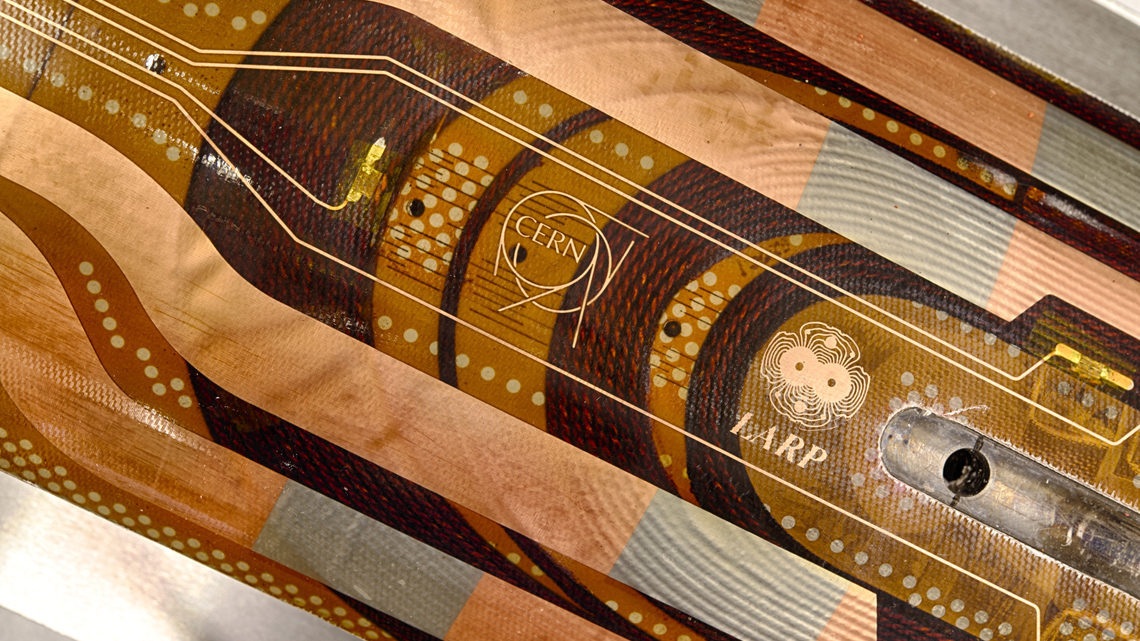 A High-Luminosity LHC coil similar to those incorporated into the successful magnet prototype shows the collaboration between CERN and the LHC Accelerator Research Program, LARP.

This technology is powerful and versatile—like upgrading from a moped to a motorcycle. But this new super material doesn’t come without its drawbacks.

“Niobium-three tin is much more complicated to work with than niobium titanium,” says Peter Wanderer, head of the Superconducting Magnet Division at Brookhaven National Lab. “It doesn’t become a superconductor until it is baked at 650 degrees Celsius. This heat-treatment changes the material’s atomic structure and it becomes almost as brittle as ceramic.”

Building a moose-sized magnet from a material more fragile than a teacup is not an easy endeavor. Scientists and engineers at the US national laboratories spent 10 years designing and perfecting a new and internationally reproducible process to wind, form, bake and stabilize the coils.

“The LARP-CERN collaboration works closely on all aspects of the design, fabrication and testing of the magnets,” says Soren Prestemon of the Berkeley Center for Magnet Technology at Berkeley Lab. “The success is a testament to the seamless nature of the collaboration, the level of expertise of the teams involved, and the ownership shown by the participating laboratories.”

This model is a huge success for the engineers and scientists involved. But it is only the first step toward building the next big supercollider.

“This test showed that it is possible,” Apollinari says. “The next step is it to apply everything we’ve learned moving from this prototype into bigger and bigger magnets.”