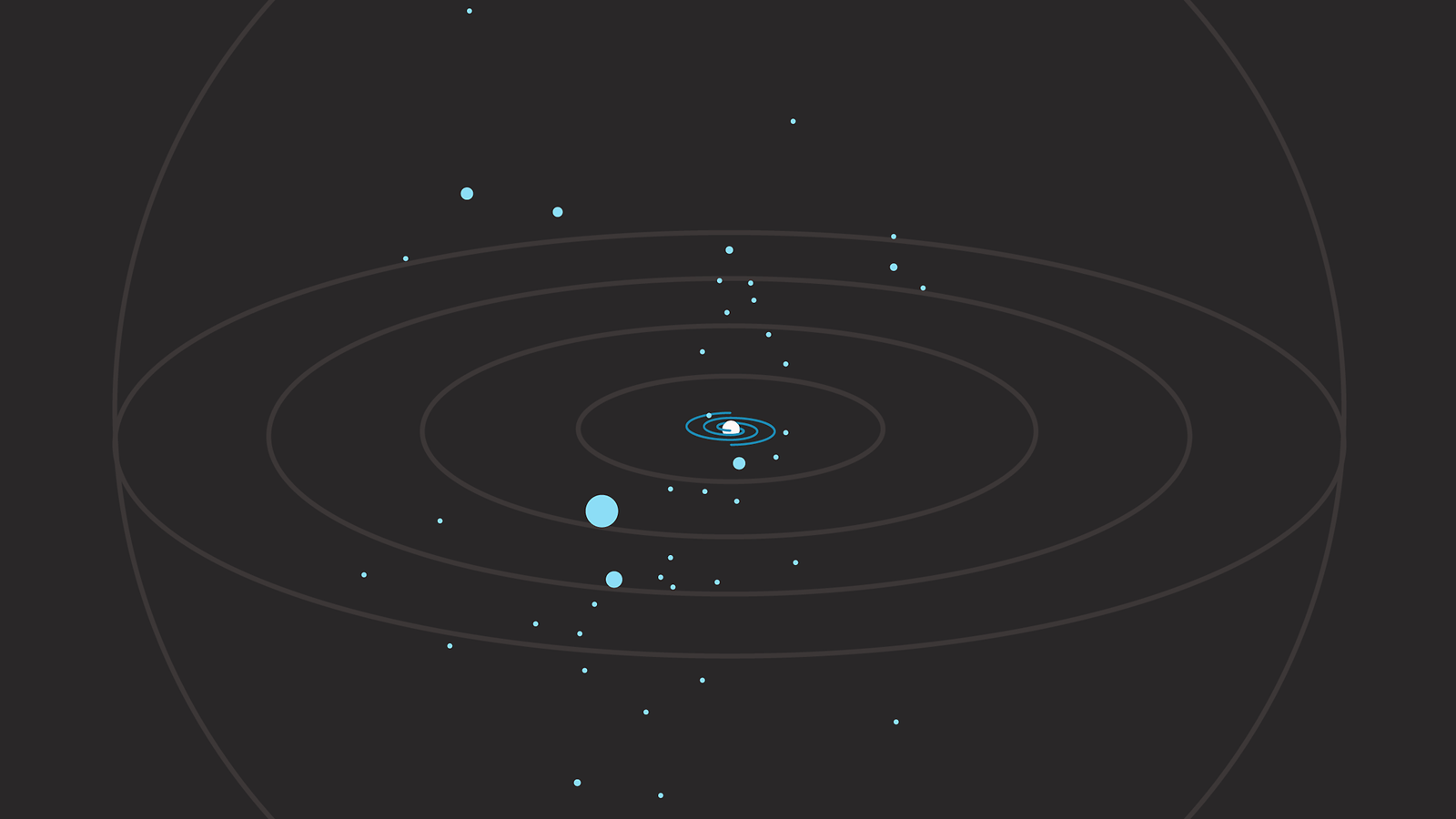 What can our cosmic neighbors tell us about dark matter and the early universe?

Now picture that mansion at the heart of a neighborhood that stretches irregularly around it, featuring other houses of different sizes—but all considerably smaller. Cloak the neighborhood in darkness, and the houses appear as clusters of lights. Many of the clusters are bright and easy to see from the mansion, but some can just barely be distinguished from the darkness.

The largest satellite galaxy, the Large Magellanic Cloud, is also one of the closest. It is visible to the naked eye from areas clear of light pollution in the Southern Hemisphere. If the Large Magellanic Cloud were around the size of the average American home—about 2,500 square feet—then by a conservative estimate the Milky Way mansion would occupy more than a full city block. On that scale, our most diminutive neighbors would occupy the same amount of space as a toaster.

Our cosmic neighbors promise answers to questions about hidden matter and the ancient universe. Scientists are setting out to find them.

What makes a neighbor

If we are the mansion, the neighboring houses are dwarf galaxies. Scientists have identified about 50 possible galaxies orbiting the Milky Way and have confirmed the identities of roughly 30 of them. These galaxies range in size from several billion stars to only a few hundred. For perspective, the Milky Way contains somewhere between 100 billion to a trillion stars.

Dwarf galaxies are the most dark-matter-dense objects known in the universe. In fact, they have far more dark matter than regular matter. Segue 1, our smallest confirmed neighbor, is made of 99.97 percent dark matter.

Dark matter is key to galaxy formation. A galaxy forms when enough regular matter is attracted to a single area by the gravitational pull of a clump of dark matter.

Projects such as the Dark Energy Survey, or DES, find these galaxies by snapping images of a segment of the sky with a powerful telescope camera. Scientists analyze the resulting images, looking for the pattern of color and brightness characteristic of galaxies.

Scientists can find dark matter clumps by measuring the motion and chemical composition of stars. If a smaller galaxy seems to be behaving like a more massive galaxy, observers can conclude a considerable amount of dark matter must anchor the galaxy.

“Essentially, they are nearby clouds of dark matter with just enough stars to detect them,” says Keith Bechtol, a postdoctoral researcher at the University of Wisconsin-Madison and a member of the Dark Energy Survey.

Through these methods of identification (and thanks to the new capabilities of digital cameras), the Sloan Digital Sky Survey kicked off the modern hunt for dwarf galaxies in the early 2000s. The survey, which looked at the northern part of the sky, more than doubled the number of known satellite dwarf galaxies from 11 to 26 galaxies between 2005 and 2010. Now DES, along with some other surveys, is leading the search. In the last few years DES and its Dark Energy Camera, which maps the southern part of the sky, brought the total to 50 probable galaxies.

Dwarf galaxies serve as ideal tools for studying dark matter. While scientists haven’t yet directly discovered dark matter, in studying dwarf galaxies they’ve been able to draw more and more conclusions about how it behaves and, therefore, what it could be.

“Dwarf galaxies tell us about the small-scale structure of how dark matter clumps,” says Alex Drlica-Wagner of Fermi National Accelerator Laboratory, one of the leaders of the DES analysis. “They are excellent probes for cosmology at the smallest scales.”

But while studying these neighbors provides clues about the nature of dark matter, they also raise more and more questions. The prevailing cosmological theory of dark matter has accurately described much of what scientists observe in the universe. But when scientists looked to our neighbors, some of the predictions didn’t hold up.

The number of galaxies appears to be lower than expected from calculations, for example, and those that are around seem to be too small. While some of the solutions to these problems may lie in the capabilities of the telescopes or the simulations themselves, we may also need to reconsider the way we think dark matter interacts.

The elements of the neighborhood

Dwarf galaxies don’t just tell us about dark matter: They also present a window into the ancient past. Most dwarf galaxies’ stars formed more than 10 billion years ago, not long after the Big Bang. Our current understanding of galaxy formation, according to Bechtol, is that after small galaxies formed, some of them merged over billions of years into larger galaxies.

If we didn’t have these ancient neighbors, we’d have to peer all the way across the universe to see far enough back in time to glimpse galaxies that formed soon after the big bang. While the Milky Way and other large galaxies bustle with activity and new star formation, the satellite galaxies remain mostly static—snapshots of galaxies soon after their birth.

“They’ve mostly been sitting there, waiting for us to study them,” says Josh Simon, an astronomer at the Carnegie Institution for Science.

The abundance of certain elements in stars in dwarf galaxies can tell scientists about the conditions and mechanisms that produce them. Scientists can also look to the elements to learn about even older stars.

The first generation of stars are thought to have looked very different than those formed afterward. When they exploded as supernovae, they released new elements that would later appear in stars of the next generation, some of which are found in our neighboring galaxies.

“They do give us the most direct fingerprint we can get as to what those first stars might have been like,” Simon says.

Scientists have learned a lot about our satellites in just the past few years, but there’s always more to learn. DES will begin its fourth year of data collection in August. Several other surveys are also underway. And the Large Synoptic Survey Telescope, an ambitious international project currently under construction in Chile, will begin operating fully in 2022. LSST will create a more detailed map than any of the previous surveys’ combined.

Use this interactive graphic to explore our neighboring galaxies. Click on the abbreviated name of the galaxy to find out more about it.

The size of each galaxy is listed in parsecs, a unit equal to about 3.26 light-years or 19 trillion miles. The distance from the Milky Way is described in kiloparsecs, or 1000 parsecs. The luminosity of each galaxy, L⊙, is explained in terms of how much energy it emits compared to our sun. Right ascension and declination are astronomical coordinates that specify the galaxy's location as viewed from Earth.

Read extra descriptive text about some of our most notable neighboring galaxies (the abbreviations for which appear in darker red).