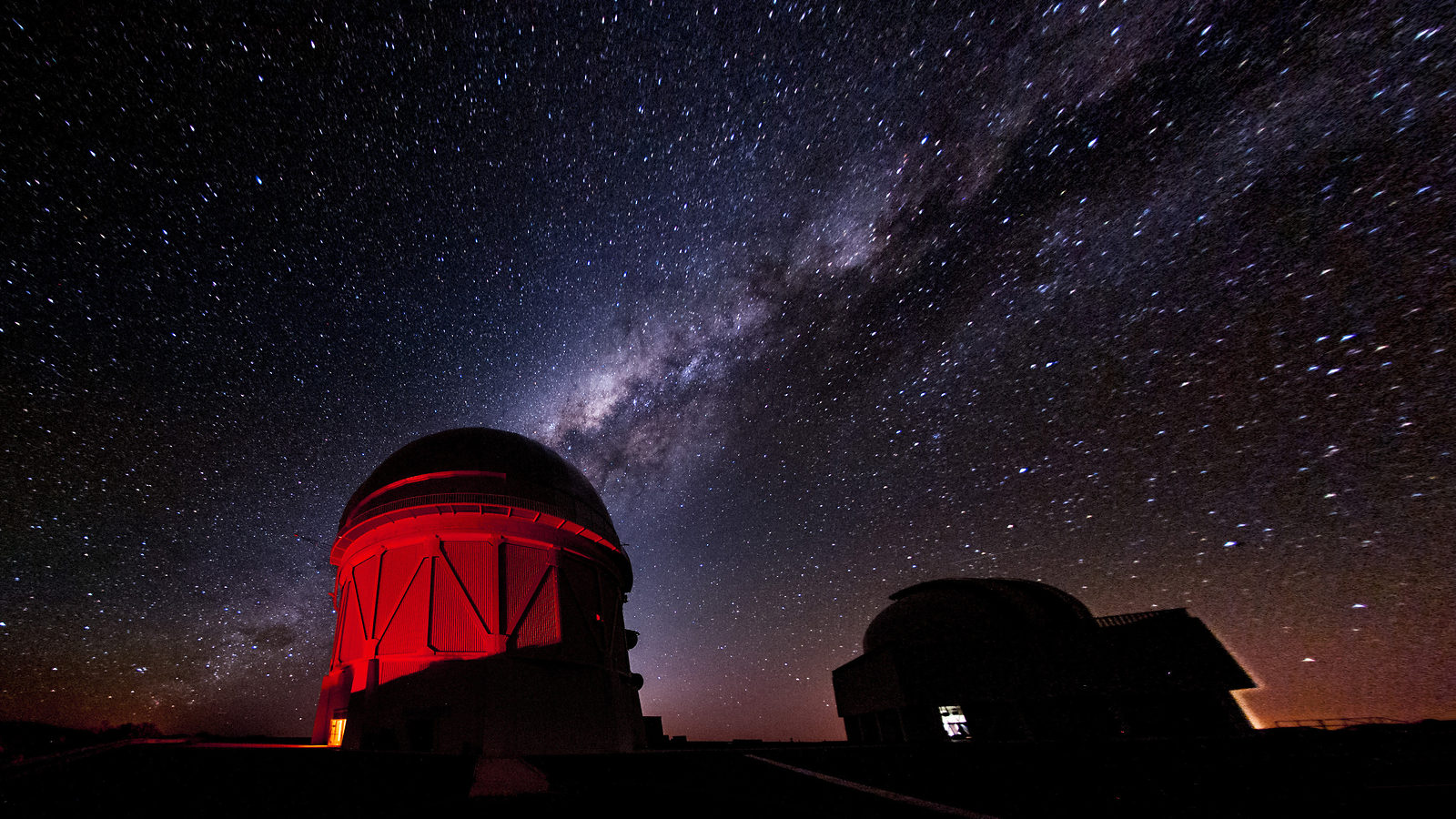 Imagine planting a single seed and, with great precision, being able to predict the exact height of the tree that grows from it. Now imagine traveling to the future and snapping photographic proof that you were right.

If you think of the seed as the early universe, and the tree as the universe the way it looks now, you have an idea of what the Dark Energy Survey (DES) collaboration has just done. In a presentation today at the American Physical Society Division of Particles and Fields meeting at the US Department of Energy’s (DOE) Fermi National Accelerator Laboratory, DES scientists will unveil the most accurate measurement ever made of the present large-scale structure of the universe.

These measurements of the amount and “clumpiness” (or distribution) of dark matter in the present-day cosmos were made with a precision that, for the first time, rivals that of inferences from the early universe by the European Space Agency’s orbiting Planck observatory. The new DES result (the tree, in the above metaphor) is close to “forecasts” made from the Planck measurements of the distant past (the seed), allowing scientists to understand more about the ways the universe has evolved over 14 billion years.

“This result is beyond exciting,” says Scott Dodelson of Fermilab, one of the lead scientists on this result. “For the first time, we’re able to see the current structure of the universe with the same clarity that we can see its infancy, and we can follow the threads from one to the other, confirming many predictions along the way.”

Most notably, this result supports the theory that 26 percent of the universe is in the form of mysterious dark matter and that space is filled with an also-unseen dark energy, which is causing the accelerating expansion of the universe and makes up 70 percent.

Paradoxically, it is easier to measure the large-scale clumpiness of the universe in the distant past than it is to measure it today. In the first 400,000 years following the Big Bang, the universe was filled with a glowing gas, the light from which survives to this day. Planck’s map of this cosmic microwave background radiation gives us a snapshot of the universe at that very early time. Since then, the gravity of dark matter has pulled mass together and made the universe clumpier over time. But dark energy has been fighting back, pushing matter apart. Using the Planck map as a start, cosmologists can calculate precisely how this battle plays out over 14 billion years.

“The DES measurements, when compared with the Planck map, support the simplest version of the dark matter/dark energy theory,” says Joe Zuntz, of the University of Edinburgh, who worked on the analysis. “The moment we realized that our measurement matched the Planck result within 7 percent was thrilling for the entire collaboration.” 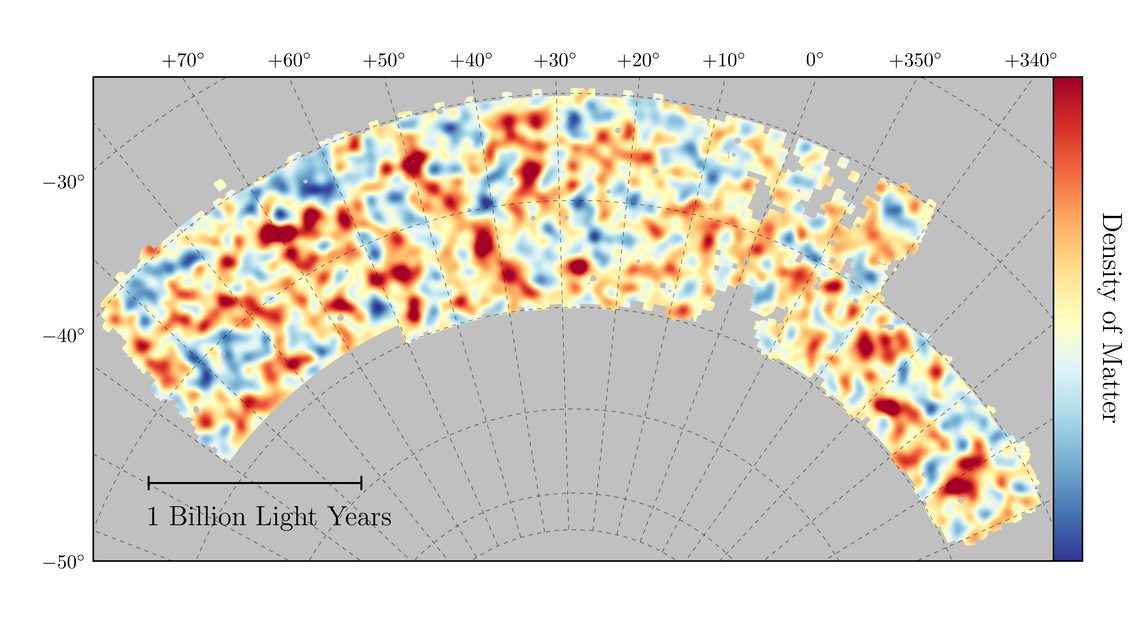 This map of dark matter is made from gravitational lensing measurements of 26 million galaxies in the Dark Energy Survey. The map covers about 1/30th of the entire sky and spans several billion light-years in extent. Red regions have more dark matter than average, blue regions less dark matter.

Chihway Chang of the Kavli Institute for Cosmological Physics at the University of Chicago and the DES collaboration.

The primary instrument for DES is the 570-megapixel Dark Energy Camera, one of the most powerful in existence, able to capture digital images of light from galaxies eight billion light-years from Earth. The camera was built and tested at Fermilab, the lead laboratory on the Dark Energy Survey, and is mounted on the National Science Foundation’s 4-meter Blanco telescope, part of the Cerro Tololo Inter-American Observatory in Chile, a division of the National Optical Astronomy Observatory. The DES data are processed at the National Center for Supercomputing Applications at the University of Illinois at Urbana-Champaign.

Scientists on DES are using the camera to map an eighth of the sky in unprecedented detail over five years. The fifth year of observation will begin in August. The new results released today draw from data collected only during the survey’s first year, which covers 1/30th of the sky.

“It is amazing that the team has managed to achieve such precision from only the first year of their survey,” says National Science Foundation Program Director Nigel Sharp. “Now that their analysis techniques are developed and tested, we look forward with eager anticipation to breakthrough results as the survey continues.”

DES scientists used two methods to measure dark matter. First, they created maps of galaxy positions as tracers, and second, they precisely measured the shapes of 26 million galaxies to directly map the patterns of dark matter over billions of light-years using a technique called gravitational lensing.

To make these ultra-precise measurements, the DES team developed new ways to detect the tiny lensing distortions of galaxy images, an effect not even visible to the eye, enabling revolutionary advances in understanding these cosmic signals. In the process, they created the largest guide to spotting dark matter in the cosmos ever drawn (see image). The new dark matter map is 10 times the size of the one DES released in 2015 and will eventually be three times larger than it is now.

“It’s an enormous team effort and the culmination of years of focused work,” says Erin Sheldon, a physicist at the DOE’s Brookhaven National Laboratory, who co-developed the new method for detecting lensing distortions.

These results and others from the first year of the Dark Energy Survey will be released today online and announced during a talk by Daniel Gruen, NASA Einstein fellow at the Kavli Institute for Particle Astrophysics and Cosmology at DOE’s SLAC National Accelerator Laboratory, at 5 pm Central time. The talk is part of the APS Division of Particles and Fields meeting at Fermilab and will be streamed live.

The results will also be presented by Kavli fellow Elisabeth Krause of the Kavli Insitute for Particle Astrophysics and Cosmology at SLAC at the TeV Particle Astrophysics Conference in Columbus, Ohio, on Aug. 9; and by Michael Troxel, postdoctoral fellow at the Center for Cosmology and AstroParticle Physics at Ohio State University, at the International Symposium on Lepton Photon Interactions at High Energies in Guanzhou, China, on Aug. 10. All three of these speakers are coordinators of DES science working groups and made key contributions to the analysis.

“The Dark Energy Survey has already delivered some remarkable discoveries and measurements, and they have barely scratched the surface of their data,” says Fermilab Director Nigel Lockyer. “Today’s world-leading results point forward to the great strides DES will make toward understanding dark energy in the coming years.”