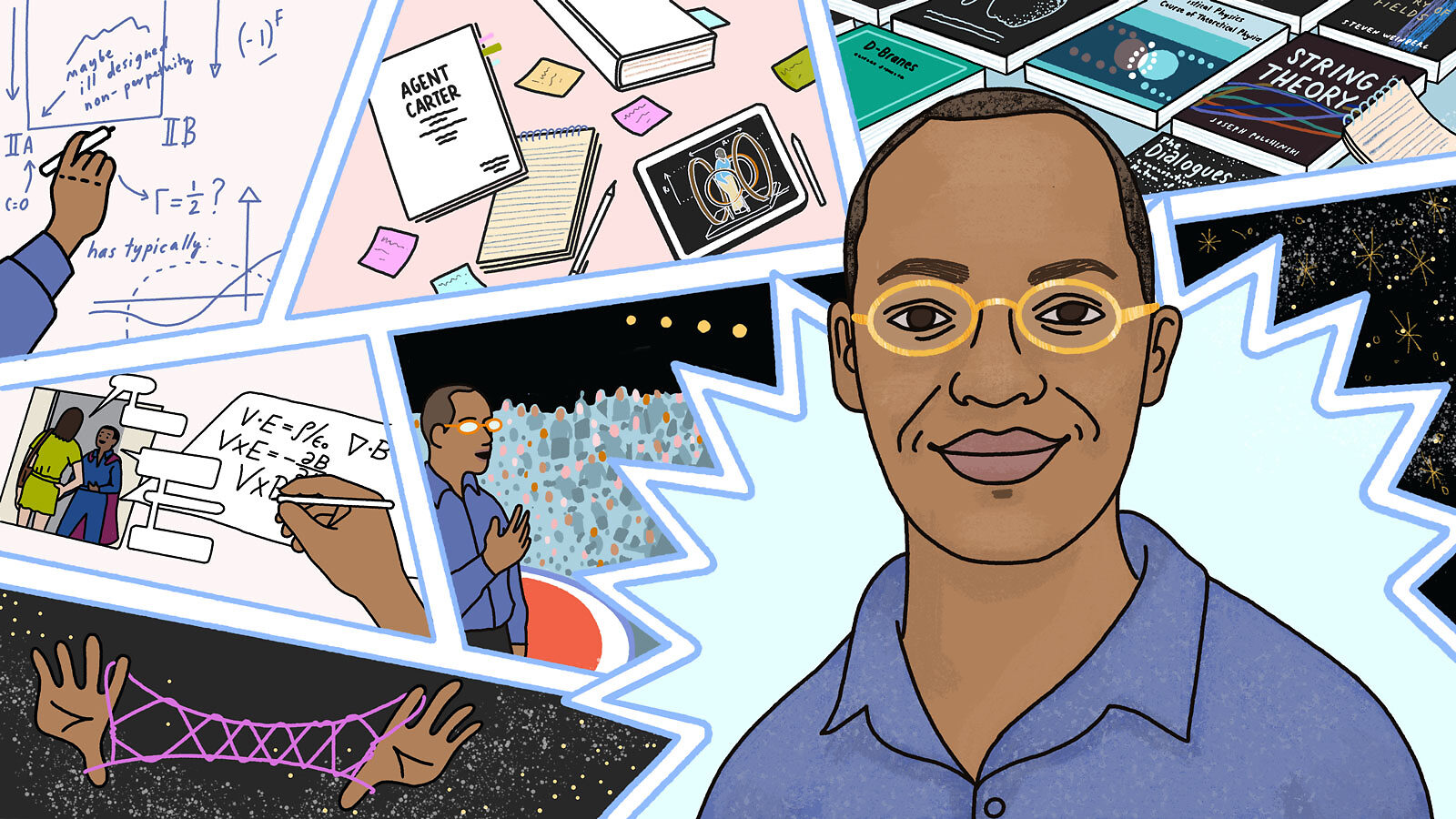 Clifford Johnson, a theoretical physicist at the University of Southern California, is an accomplished scientist working on ways to describe the origin and fabric of the universe.

He is also a multitalented science communicator and one of the rare scientists that can boast his own IMDb page.

Johnson’s efforts to engage the public with science have spanned blogging, giving public lectures, appearing on television and web shows, writing and illustrating a graphic novel, and acting as a science advisor for television shows and blockbuster films including Star Trek: Discovery and Avengers: Endgame.

In the spirit of his 2017 popular science book The Dialogues, I hopped on a Zoom call with Johnson for a dialogue of my own. What follows is an edited version of our conversation about how and why he came to study quantum physics, why he decided to create a graphic novel about science, the ups and downs of Hollywood consulting, and why public engagement with science matters. 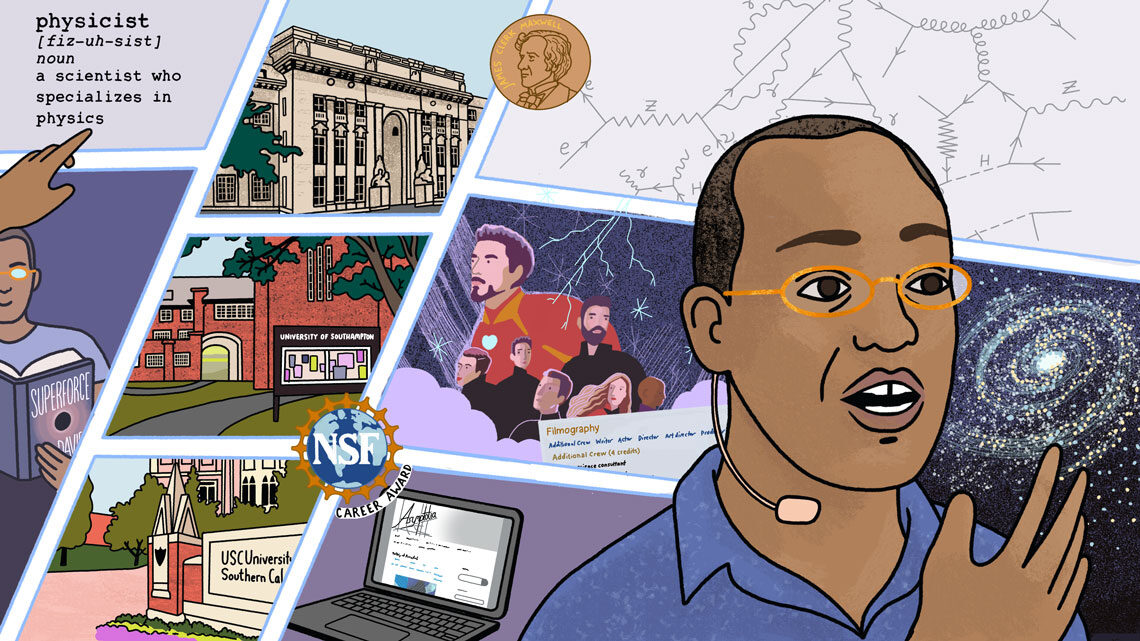 How did you decide to study physics?

From a very early age, I was asking questions about how the world works and trying to figure out how things worked by tinkering with old radios and things. Then at some point, I learned that there's a career where you can make a living from that sort of curiosity—being a scientist.

And then some family friend asked me what kind of scientist I wanted to be. I didn't realize there were different kinds. So I found a dictionary and I went through page by page and read the definitions of “chemist,” “biologist,” all of the “-ists” and “-ologists.” And when I hit “physicist,” I thought, “this is the one,” because the entry said that physics underlies all the other sciences—which appealed to me because I wanted to keep my options open.

You were awarded a National Science Foundation CAREER Award in 1997 and received the 2005 Maxwell Medal and Prize for your early-career contributions to string theory and quantum gravity research. What drew you to theoretical physics and quantum gravity?

I got interested in particle physics reading authors such as Paul Davies and Abraham Pais as a teenager. And then in my undergraduate studies at Imperial College, I began to learn about the issues of trying to quantize gravity, which led me to study string theory for my PhD at the University of Southampton. The universe really does seem to be fundamentally quantum mechanical. So, it's a real problem if we don't know quantum mechanically how to understand gravity, spacetime and where the universe comes from.

You also do a lot of public engagement on top of your research. The American Association for Physics Teachers awarded you the 2018 Klopsteg Award for your outreach. How did you get started in science communication and outreach?

I’ve been doing outreach in a way since I was 8 or 10 years old. I was that annoying kid who was always explaining things. In school, people would call me “the professor.” Everyone thought they were giving me a hard time, but secretly I thought it was an awesome nickname.

Outreach, for me, is a natural part of being a scientist. Research is all about the story of how things work and where they came from. And what's the point of knowing the story, if you can't also get other people excited about it? If someone wants to know, I'm going to tell them. I got reasonably good at explaining things in a coherent way. Word got around, and I started presenting on radio and TV.

Sometimes, people would get in touch from the media because of something they read on my blog. I co-founded a blog called Cosmic Variance with four other physicists in 2005, and also started a solo blog called Asymptotia in 2006. I’d write about interesting ideas and what was going on in research, as well as my other interests and day-to-day life. Blogging created communities where people would engage in conversation and we'd have great discussions, and then that would encourage us to write more.

Why is engaging the public in science so important to you?

Public outreach is important because a lot of people think they wouldn’t understand scientific issues, and so they leave it to a small group of people to make decisions. And that’s not democratic. We aren't a democracy if people aren't more familiar and comfortable with science and the people who do science.

Your book 'The Dialogues' is a graphic novel structured as a series of conversations about science, which you wrote and also illustrated yourself. How did that come together?

I agonized over writing a book for the general public for a long time because I didn’t think there was any urgency to write one of the standard kinds of books that get written by people in my field. Not that there’s anything wrong with those books. But I thought that if we could break out of the narrow mold of how popular science books are supposed to be, we could reach so many more people.

Though I was a comic book fan from a young age, I essentially snuck up on the on the graphic-novel concept backwards. The ratio between prose and illustration changed as I began to conceptualize what I really wanted to be able to do with the book. The illustration aspect began to eat the prose aspect and became a narrative in its own right. And then I realized it was going to be a graphic novel. Writers often say that you try and create the book that you want to see in the world—so I did, and I even took the time out to teach myself to draw at the level needed to do it.

In all graphic novels, spacetime is created by the reader. When you’re looking at a series of comic panels, your mind constructs how space and time come alive on the page. So what better medium to talk about physics, the subject that is about spacetime, than graphic novels? I could take advantage of the medium to illustrate ideas, like arranging panels to swirl into the interior of a black hole and mess up the order to convey how space and time get messed up there.

Do you plan to write another book?

Yes. The plan is to do a new set of dialogues. Unfortunately, I’m still working on the time machine in the basement so I can manufacture more hours in the day. Sooner or later, I’ll get it to work.

Okay, you know I had to ask this—what’s it like working with the Science and Entertainment Exchange and being a science advisor for movies and TV?

Most of the work is not the glamorous, sitting-around-chatting-with-Spielberg kind of thing that people envision. There’s no industry standard for science consulting. The work can be anything from a writer getting in touch with me and asking if I'll take a look at a script, or if I’ll talk with them about an idea they have. Or the directors call consultants in at the end and ask us to fix something before they start shooting, although by then it’s usually too late for a good conversation.

If the science is going to be part of the DNA of the story, then it's best if conversations happen early. The best stuff happens when there’s an environment where science can be an inspiration at the writing stage. For the Avengers: Endgame and Infinity War movies, one of the smart things the filmmakers did is they got in touch early on and then we brainstormed ideas. They did this with other scientists, too, gathering a lot of good material to draw from.

How much of your advice gets used?

Anywhere from zero to a hundred percent. I have no control over how much. When I give public talks, I talk about the trade-off between how much control you have and the size of the audience you can reach. I have complete control over the content of a public lecture to a few hundred people. I had zero control of what ended up in the final cut of Avengers, with an audience of many millions.

In a few projects I advised on, there are even scenes where I wrote most of the words. I either went over the script and revised the science talk, or the writers left a hole for me to tell them how to say something, and then they used my suggestions verbatim. That’s not common, but it happens sometimes.

Can you give me some examples of projects where you had a significant impact?

Season two of the show Agent Carter is a great model of how things between TV writers and science consultants are supposed to work. Entire characters and storylines on the show were invented based on things we brainstormed together in the writers’ room. A few times, I sketched an idea about what a machine might look like and they just went away and built the machine for the set!

Another project where I was involved very early on was the first season of National Geographic’s series Genius, about the life and work of Einstein. Not only did I teach the writers a lot about relativity, but I helped pick pieces of science that they could unpack thematically for episodes and helped them write scenes so that the science could really be on show.

Maybe most importantly, they took seriously my encouragement to show that Einstein discussed his ideas with others around him, to help break that “lone genius” mythology that often drives people away from thinking they can be scientists.

What are the most important things for films and TV shows to get right when it comes to science?

I care about whether the scientists are portrayed like real people with narratives that help you relate to them and understand them. When I'm working with artists and media people creating images of scientists, I encourage them to make those people more real, make them more accessible, show that they're human beings.

You do so much! How do you balance your work, your outreach and the rest of your life?

I think the most important skill to learn is dealing with interruption and knowing how to put something on hold and then come back to it. I've gotten better at doing a lot of stuff in my head in preparation for that short time I'm going to have where I will be able to sit at my desk and do my physics.

I hope that I am helping to dispel the myth that if you’re good at outreach, it means that you’re not good—or not interested—in research at the highest level. That’s often used to discourage people from spending time on outreach and engagement, or as an excuse to dismiss people of color or women in the field. The fact that I have been very successful at research and teaching and also science outreach shows that it is possible to be a significant player in both realms.