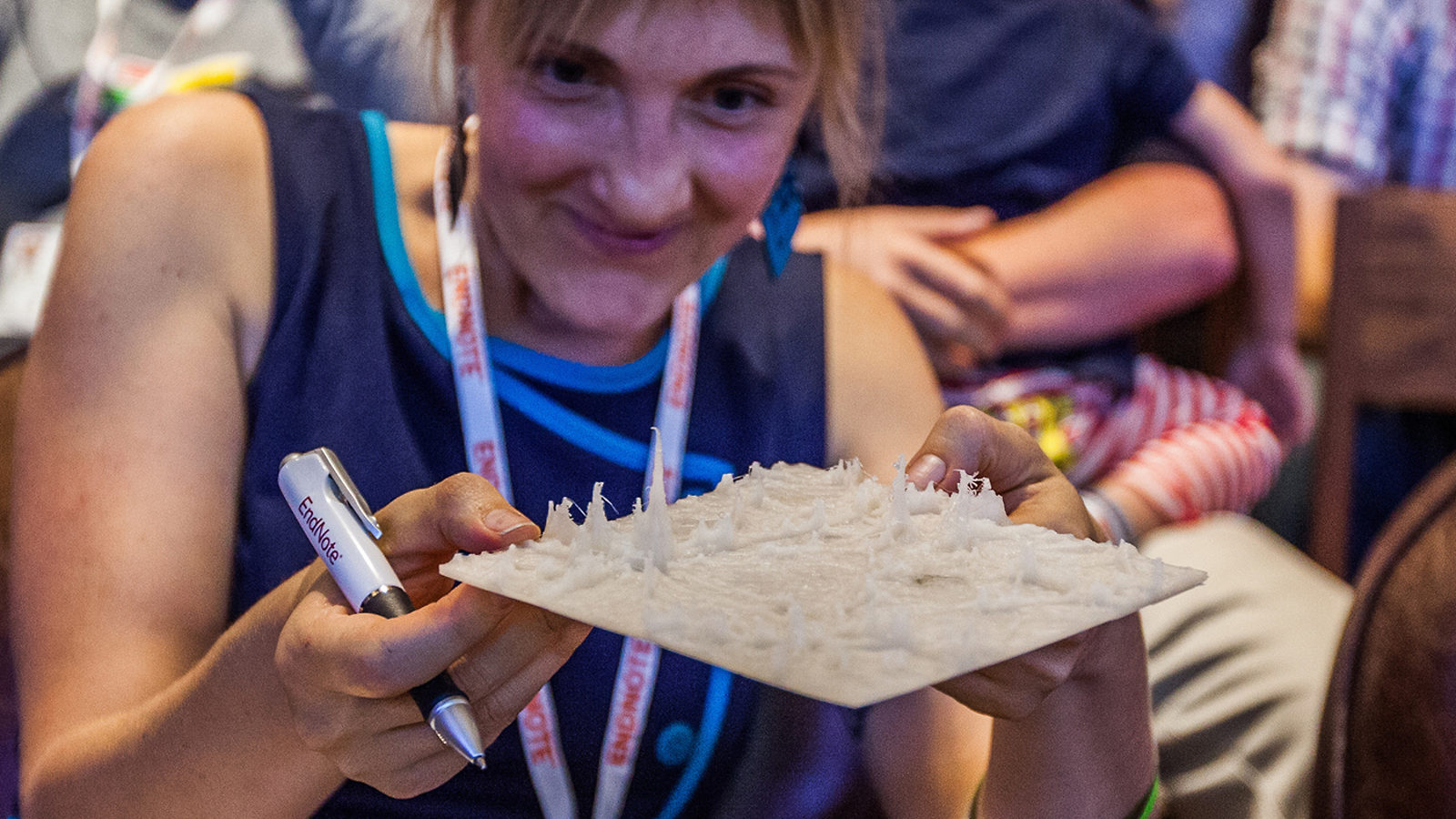 As the space flick Gravity plays on large monitors in the open office space of a San Francisco tech company, nearly 175 people fight off sleep in their final push to finish their work within the time limit.

One team assembles a mechanized, dancing cardboard dinosaur fitted with a red glowing eye. Another prepares a quad-rotor mini-copter security drone for a flight test in a local park.

This is Science Hack Day, where small groups of physicists, engineers, designers, programmers and other science enthusiasts design and prototype new ideas in a 24-hour period.

When the time is up, groups present their creations in 150-second demonstrations.

One white plastic creation resembles a piece of coral: It has thick, lumpy central features and an array of protruding, arm-like filaments. It is based on a computer rendering that represents a stretch of space measuring about 30 million light-years. The other, a collection of stalagmite-like spikes rising from a squared base, is a relief map of projected dark-matter density that measures 120 million light-years across.

Ariel Waldman, a professed space geek and “global instigator” for the volunteer-run, corporate-sponsored Science Hack Day, says the concept was born out of a panel talk at the March 2010 South by Southwest conference. Jeremy Keith, a friend and fellow space geek, suggested creating a science-focused “hack day” event to promote open-source innovation and collaboration.

Keith held the first one in London in June 2010. Waldman organized the first Bay Area hack day in Palo Alto, California, in November 2010. Since then there have been about three dozen more around the world.

“A lot of what we do is outreach,” Waldman says. “We do a lot of work to make sure it’s diversified. Everyone is learning new things. It’s OK to think about working on types of science that might otherwise not seem to have anything to do with your expertise.”

Keith, who was on hand to participate in the latest San Francisco event, worked on a social media and science-fiction app called “Habitasteroids” that matched a specified group of Twitter followers with an actual asteroid on which there was space for all of them to live.

Keith says the hack events have far exceeded his expectations, and he is constantly impressed by the projects that attendees are able to pull together on such short notice.

“The atmosphere is just so awesome,” he says. “Late at night, when people are still up, it’s pretty fun to see everyone just getting into the flow ...and that moment when they say, ‘Yeah! It works!’”

Debbie Bard, also of KIPAC, learned about Science Hack Day from a colleague and was intrigued by the interaction of scientists and nonscientists. “It always sounded like fun,” she says. “I’m really interested in doing sciency stuff with nonscientists. I’m taking part as a scientist-for-hire.”

Bard worked with one team that successfully constructed simple particle detectors known as cloud chambers out of low-cost gear, and another one that constructed a Web mashup of disaster maps that included fire, landslide, earthquake and tsunami hazard zones plus some other useful information, including the locations of hospitals, mobile phone towers and—perhaps as a last resort—local bars.

KIPAC’s Phil Marshall contributed to GalaxyCraft, an astrophysics tool that allowed users to attempt to recreate the look of actual galaxy images by adjusting the angle, spiral character and overall appearance of simulated galaxies. Marshall says he hopes that such a tool, which is more sophisticated than one professionals currently use, will enable citizen scientists to contribute to the study of galaxy evolution.

Marshall, an organizer of a hack day held at KIPAC in May, encouraged others from the institute to participate in Science Hack Day.

“Coming up with projects for other people to hack on is only part of our role,” he says. “The best cosmology-related hack may be something we haven’t thought of.”