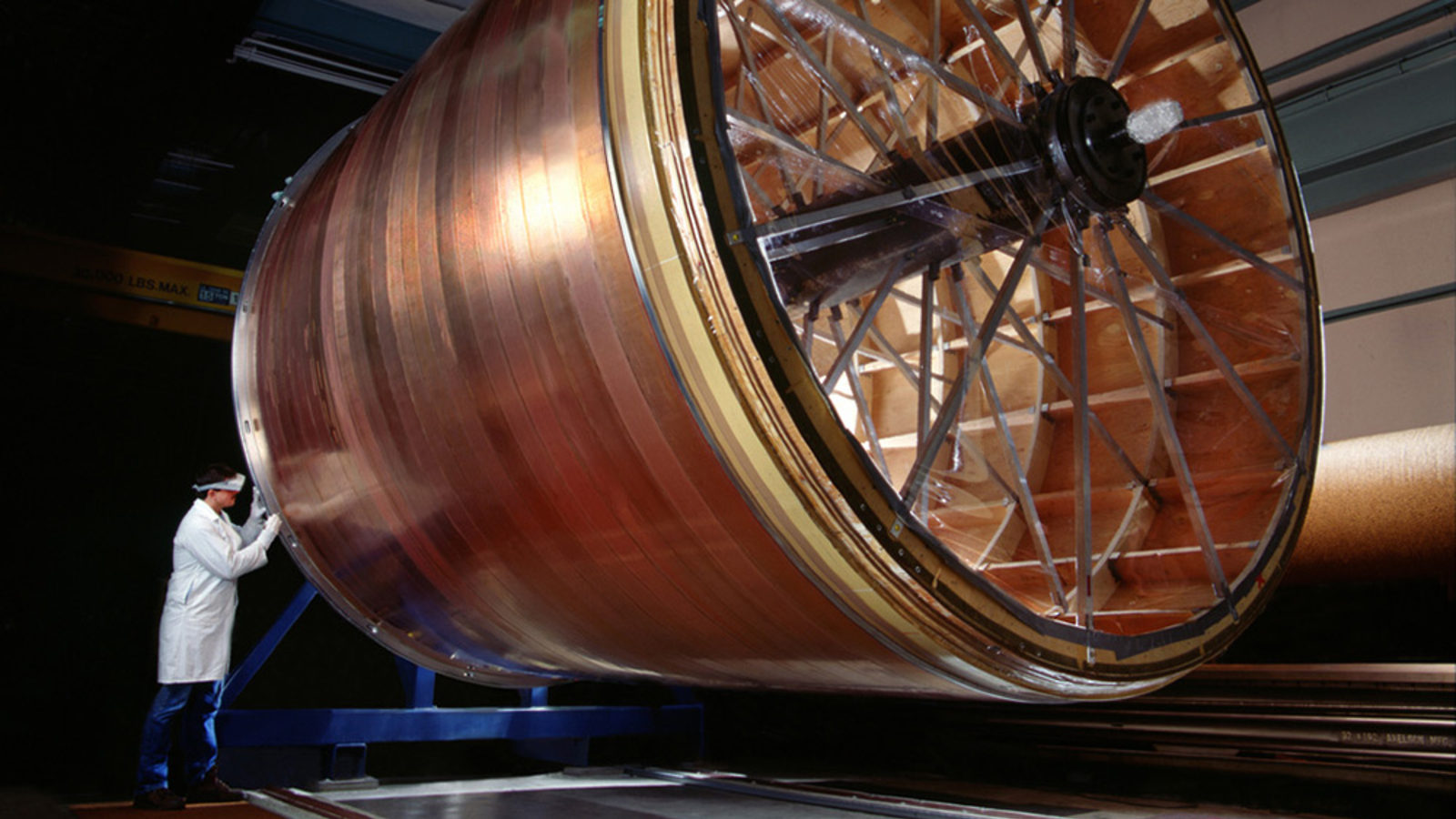 At the heart of many particle physics experiments sits a device with a catchy name: the time projection chamber. With an important job and a storied history, TPCs have a special place in particle physics.

Last month, scientists on the MicroBooNE experiment began the construction of a 170-ton liquid argon time projection chamber—a device that, at the size of a school bus, will be the biggest detector of its kind in the United States. More importantly, it will play a crucial role in recording detailed tracks of charged particles, helping the collaboration determine just how many types of neutrino oscillations exist.

This type of detector may have a futuristic name, but it already has a spot in the history of particle physics.

In 1974, a physicist at Lawrence Berkeley National Laboratory, David Nygren, developed the idea for a new type of particle detector that would forever change the way scientists study particle collisions.

Particle detectors track and identify subatomic particles produced in messy particle collisions. At the time Nygren invented the time-projection chamber, or TPC, scientists had been using detectors that gave a one-dimensional picture and so could reconstruct only a handful of particles from each collision. Nygren’s concept, on the other hand, allowed scientists to study tens of thousands of subatomic particles from a single event with greater accuracy than before.

Moreover, TPCs introduced a new level of performance that allowed physicists to analyze particle collisions in three dimensions. Physicists consider this new feat one of the notable advances in particle physics technology during the 20th century.

A group of scientists led by Nygren at Berkeley Lab designed and built the first major TPC and installed it at SLAC National Accelerator Laboratory in 1981 to study electron–positron collisions. Today, nearly a dozen variations of the original operate at experiments around the world, including the ALICE experiment at the Large Hadron Collider at CERN, which studies heavy ion collisions, and the T2K experiment in Japan, which uses three TPCs to study neutrino oscillation properties.

“I really didn’t anticipate the list of experiments [using TPCs] to become so broad. It’s very satisfying,” says Nygren, who gave a presentation at Fermilab on September 19 on the origins and evolution of the time projection chamber.

When a charged particle, such as a positron, travels through a substance like air, it ionizes atoms that cross its path, knocking free some of their electrons. Scientists can’t observe the ionizing particle directly, but they use particle detectors to amplify and measure the wake of free electrons. Those free electrons serve as a proxy for the ionizing particle’s path, which ultimately tells scientists the type of particle and its momentum.

To measure momentum, scientists traditionally oriented electric and magnetic fields perpendicular to each other. Long detection wires running the length of the detector parallel to an induced magnetic field generated the perpendicular electric fields. Free electrons would be drawn to the wires, which gave signals that permitted scientists to measure the curvature of tracks produced by ionizing particles in the detector, which revealed momentum.

Although this technique brought the electrons to where scientists needed them to go, it didn’t transport the electrons on a straight, or otherwise predictable, path because the perpendicular magnetic field caused the path of free electrons to be curved, too. This made it difficult to track the electrons.

Moreover, the orientation of the long detection wires only provided scientists with a one dimensional picture. So when a large number of particles were present within the detector, it became almost impossible for scientists to correctly match the signals from the electrons with their corresponding ionizing particle.

“The invention of the TPC idea is one of those, for me, marvelous stories of frustration turned into opportunity,” Nygren says. “I felt totally defeated trying to use the techniques we knew in 1974.”

Nygren’s “eureka” moment arrived when he asked himself, “What if I place the electric and magnetic fields parallel to one another?” The idea would require an entirely different detector design, where detection wires would be placed at either end of the device as opposed to along the length of it.

Using a then 62-year-old equation, Nygren determined that such a technique would allow scientists to track electrons with greater accuracy than before because the electrons’ path was no longer curved. Like very precise sheep dogs, the magnetic field would shepherd the electrons along a straight line to the detection wires. This new development also meant that scientists could build larger detectors because electrons would travel in a straight line for as many meters as the electric field pulled them.

Another advantage, perhaps the most important, was that TPCs gave scientists a three-dimensional picture of collisions within the detector. This made it relatively simple for scientists to pinpoint exactly where in the detector a particle was at a certain time, so they could track its path and thus determine its momentum and particle type. Whereas scientists could only do this with a few particles at a time before because they were only certain of a particle’s position in one dimension, they could now look at thousands of particles simultaneously.

Over the years, TPCs have helped scientists identify new types of matter and antimatter and have ultimately advanced scientists’ knowledge of what happens during particle collisions. Nygren’s newest idea is to use a TPC to directly detect weakly interacting massive dark matter particles. 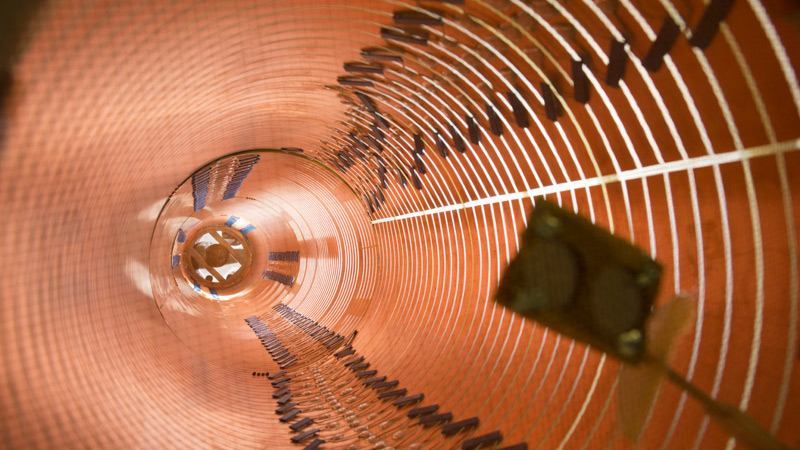 Inside an R&D liquid argon time projection chamber at Fermilab.

Within the past decade, researchers have developed a new generation of TPCs that are filled with liquid argon instead of the more traditional argon gas. One of the advantages of liquid argon is that it is denser than gas and therefore allows scientists to fit more nuclei in the same volume—leading to more particle interactions. Scientists involved with the ICARUS experiment, which contains the largest liquid argon TPC in the world, housing approximately 600 tons of liquid argon, are taking advantage of this fact to study neutrino oscillation.

“The liquid argon TPC guarantees that once you detect one neutrino inside the detector, it can be very clearly identified as either an electron, muon or tau neutrino. You may then compare the neutrino in your detector with the one you started with to identify any oscillation,” says Flavio Cavanna, a visiting faculty member at Yale University who was involved with ICARUS for nearly 20 years. “This new type of approach is well recognized in the neutrino physics community.”

As national laboratories in Europe, Japan and the United States currently investigate future neutrino physics experiments, all are considering liquid argon TPCs as the detector for these experiments, says Cavanna.

Liquid argon TPCs are more difficult to build and maintain than their gas counterparts, so it will take a great deal of effort in engineering to complete future liquid argon TPCs that could potentially be 100 times larger than the TPC for ICARUS. However, Cavanna says it will be a great achievement that will enhance sensitivity to new phenomena such as new neutrino features.

The construction of the MicroBooNE TPC at Fermilab is a step toward that goal.

Only detectors with the greatest precision capabilities will measure up to the machine seeking to explore supersymmetry, dark matter, the Higgs mechanism, and new physics that hasn't yet been