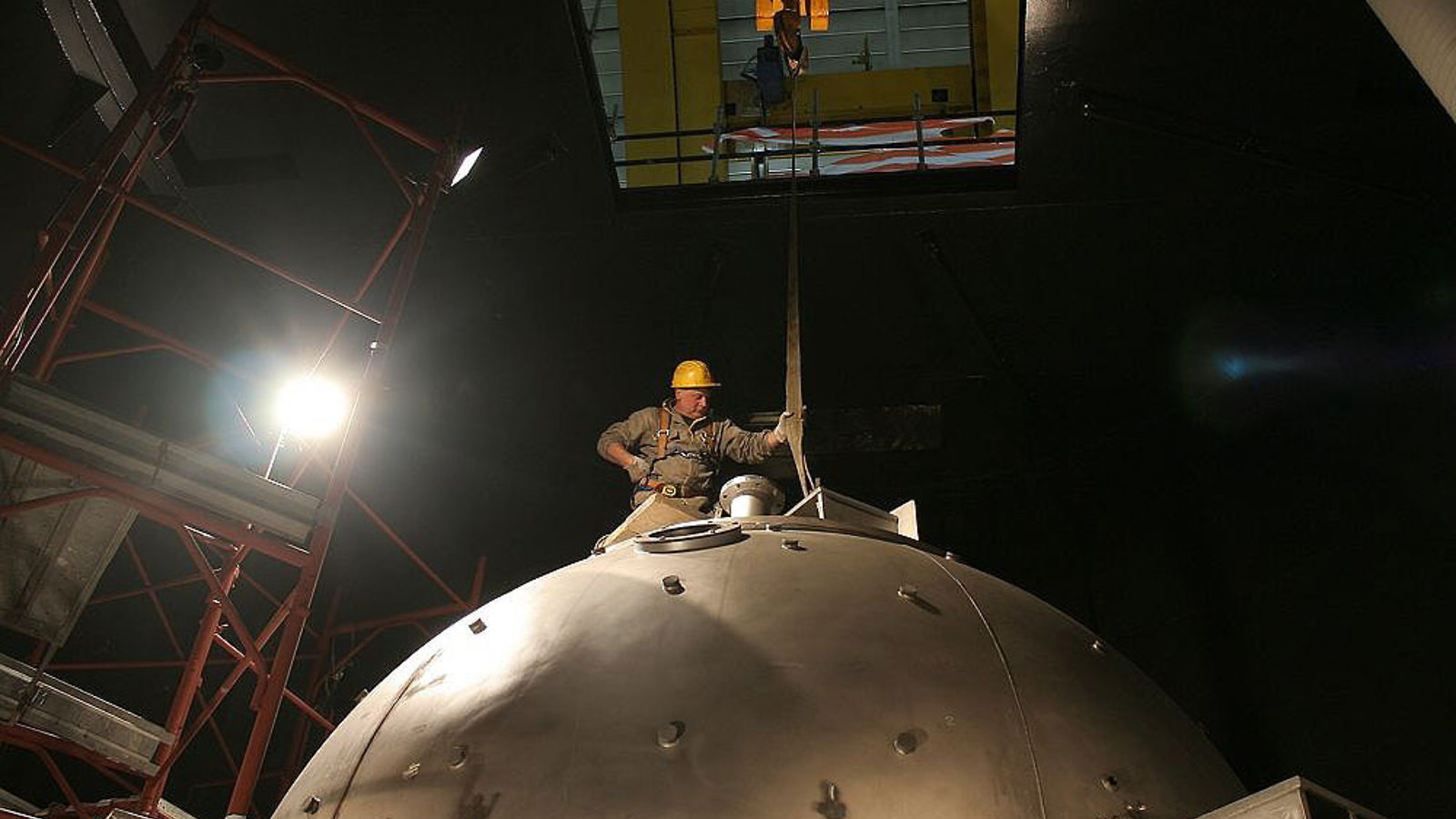 Dark-matter seekers get help from the DarkSide

Filled with rare, low-radioactivity material, the DarkSide-50 experiment will have some of the lowest background rates of any dark-matter detector. That should help it detect highly sought-after dark-matter candidates called weakly interacting massive particles, or WIMPs.

A treasure trove of dark-matter detectors rests within the deep reaches of Italy's Apennine Mountains as part of Gran Sasso National Laboratory. The mountains shield the detectors from cosmic rays, making them highly sensitive to dark-matter particles.

Reaching for still higher sensitivity is the trove's newest jewel, the DarkSide-50 experiment, which is nearing the end of its construction. DarkSide-50 will use 150 kilograms of low-radioactivity liquid argon, which Fermilab is helping to obtain, as target material for highly sought-after dark-matter candidates called weakly interacting massive particles, or WIMPs.

The mountains can't protect against all types of background contamination, including radioactive decay from the materials of the apparatus—a major concern for dark-matter detectors like DarkSide-50.

When a WIMP interacts with an argon nucleus, the nucleus deposits energy in the argon, producing a flash of light and ionizing some of the argon atoms around it.

"Radioactive decays can mimic a WIMP because they deposit energy in the liquid that is close to the energy of interest" for DarkSide-50, says Fermilab scientist Stephen Pordes, who works on the experiment.

The experiment's low-radioactive target material helps mitigate this concern. In addition, the cryostat that will house the detector is made of low-radioactivity steel, and the air in the room where scientists are currently assembling the detector is free of radon, a radioactive element usually present in air that can stick to the materials.

DarkSide-50 will be the world's first detector to use low-radioactivity liquid argon. Moreover, scientists are designing it to have some of the lowest rates of background events compared to similar detectors.

"The strategy we're following is to reduce the number of background events to less than 0.1 in three years," says Luca Grandi, a research associate at Princeton University. "That way, if we do get a bunch of events in the detector, it's a good bet that it will be WIMPs."

Next door to DarkSide-50 is the ICARUS experiment, which includes the world's largest liquid-argon chamber used for detecting neutrino oscillations. The ICARUS detector holds 600 tons of liquid argon but, even if scientists were tempted to borrow some for DarkSide-50, it would be of little use.

When these argon isotopes decay, they produce small energy deposits inside the ICARUS detector. The deposits' energies are of order 100 times smaller than the neutrino interactions ICARUS studies and are ignored in the ICARUS detector. However, those same low-energy deposits would be bad news for DarkSide-50 since they look too much like potential WIMP interactions, which could trick scientists into crying, "WIMP!"

"There are many potential experiments considering low-radioactivity argon, but we'll be the first to test it," he says.

DarkSide-50 is a link in a chain of detectors that, together, could uncover the invisible material comprising 84 percent of the matter in the universe.

A version of this article was also published in Fermilab Today.

Gran Sasso: A tale of physics in the mountains

In an epic story of fairy-tale beauty and world-leading science, human courage and determination confront adversity and Gran Sasso laboratory comes forth to see the stars once more.

In September 2009, I began my new assignment as director of the Gran Sasso National Laboratory, the biggest underground laboratory in the world devoted to neutrino and astroparticle physics.