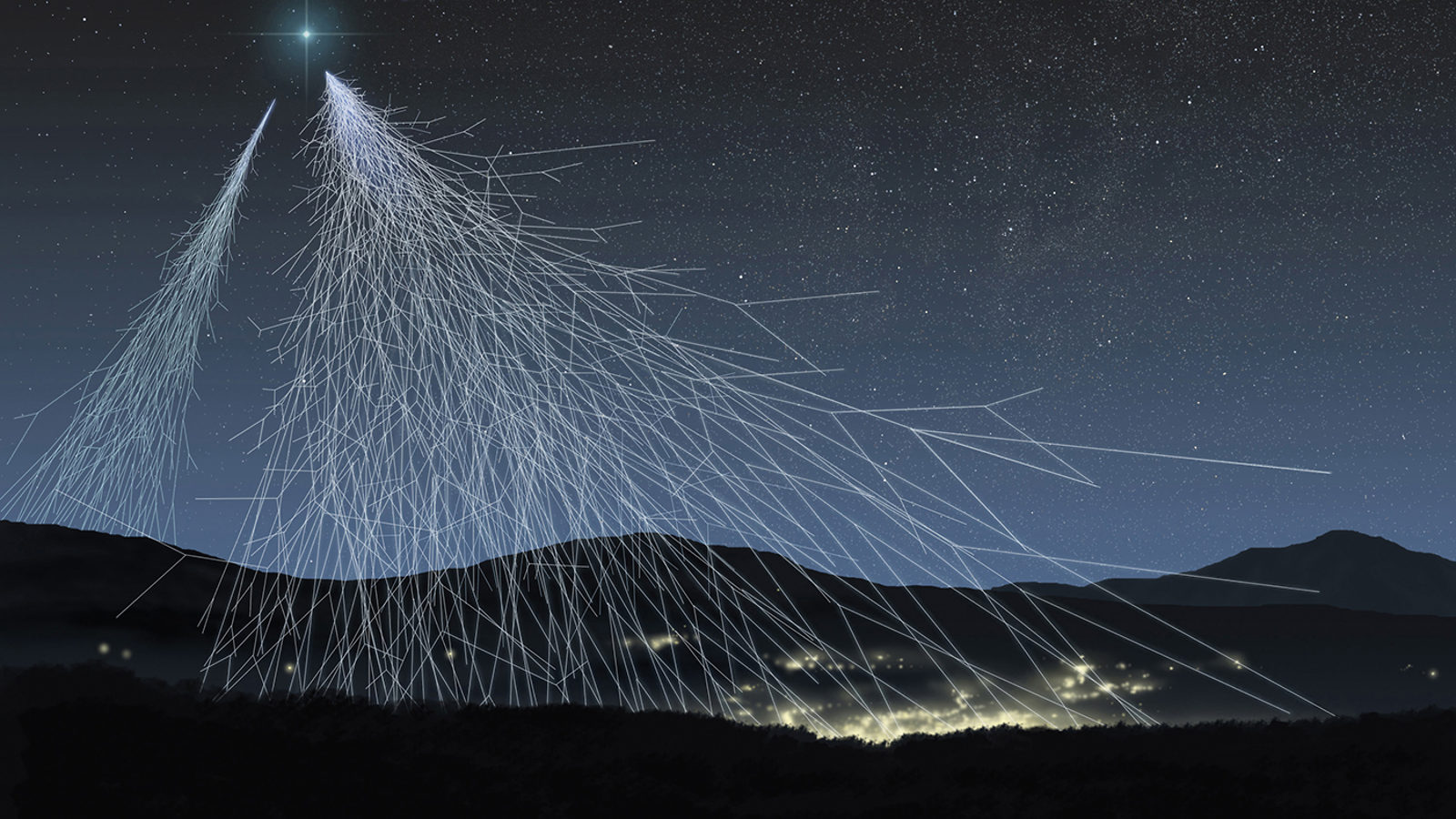 Unlike the twinkling little star of nursery rhyme, the cosmic ray is not the subject of any well-known song about an astronomical wonder. And yet while we know all about the make-up of stars, after decades of study scientists still wonder what cosmic rays are.

Thanks to an abundance of data collected over eight years, researchers in the Pierre Auger collaboration are closer to finding out what cosmic rays—in particular ultrahigh-energy cosmic rays—are made of. Their composition would tell us more about where they come from: perhaps a black hole, a cosmic explosion or colliding galaxies.

Auger’s latest research has knocked out two possibilities put forward by the prevailing wisdom: that UHECRs are dominated by either lightweight protons or heavier nuclei such as iron. According to Auger, one or more middleweight components, such as helium or nitrogen nuclei, must make up a significant part of the cosmic-ray mix.

“Ten years ago, people couldn’t posit that ultrahigh-energy cosmic rays would be made of something in between protons and iron,” says Fermilab scientist and Auger collaborator Eun-Joo Ahn, who led the analysis. “The idea would have garnered sidelong glances.”

Cosmic rays are particles that rip through outer space at incredibly high energies. UHECRs, upwards of 1018 electronvolts, are rarely observed, and no one knows exactly where they originate.

One way physicists reach back to a cosmic ray’s origins is by looking to the descendants of its collisions. The collision of one of these breakneck particles with the Earth’s upper atmosphere sets off a domino effect, generating more particles that in turn collide with air and produce still more. These ramifying descendants form an air shower, spreading out like the branches of a tree reaching toward the Earth. Twenty-seven telescopes at the Argentina-based Auger Observatory look for ultraviolet light resulting from the cosmic rays, and 1600 detectors, distributed over a swath of land the size of Rhode Island, record the showers’ signals.

Scientists measure how deep into the atmosphere—how close to Earth—the air shower is when it maxes out. The closer to the Earth, the more lightweight the original cosmic ray particle is likely to be. A proton, for example, would penetrate the atmosphere more deeply before setting off an air shower than would an iron nucleus.

Auger’s favoring a compositional middle ground between protons and iron nuclei is based on a granular take on their data, a first for cosmic-ray research. In earlier studies, scientists distilled measurements of shower depths to two values: the average and standard deviation of all shower depths in a given cosmic-ray energy range. Their latest study, however, made no such generalization. Instead, it used the full distribution of data on air shower depth. If researchers measured 1000 different air shower depths for a specific UHECR energy, all 1000 data points—not just the average—went into Auger’s simulation models.

The result was a more nuanced picture of cosmic ray composition. The analysis also gave researchers greater insight into their simulations. For one model, the data and predictions could not be matched no matter the composition of the cosmic ray, giving scientists a starting point for constraining the model further.

“Just getting the distribution itself was exciting,” Ahn says.

Auger will continue to study cosmic rays at even higher energies, gathering more statistics to answer the question: What exactly are cosmic rays made of?

Enrico Fermi's notebook of December 1948 contains four pages that represent the genesis of his theory of cosmic rays, particles that can hit the Earth's atmosphere at high speeds.