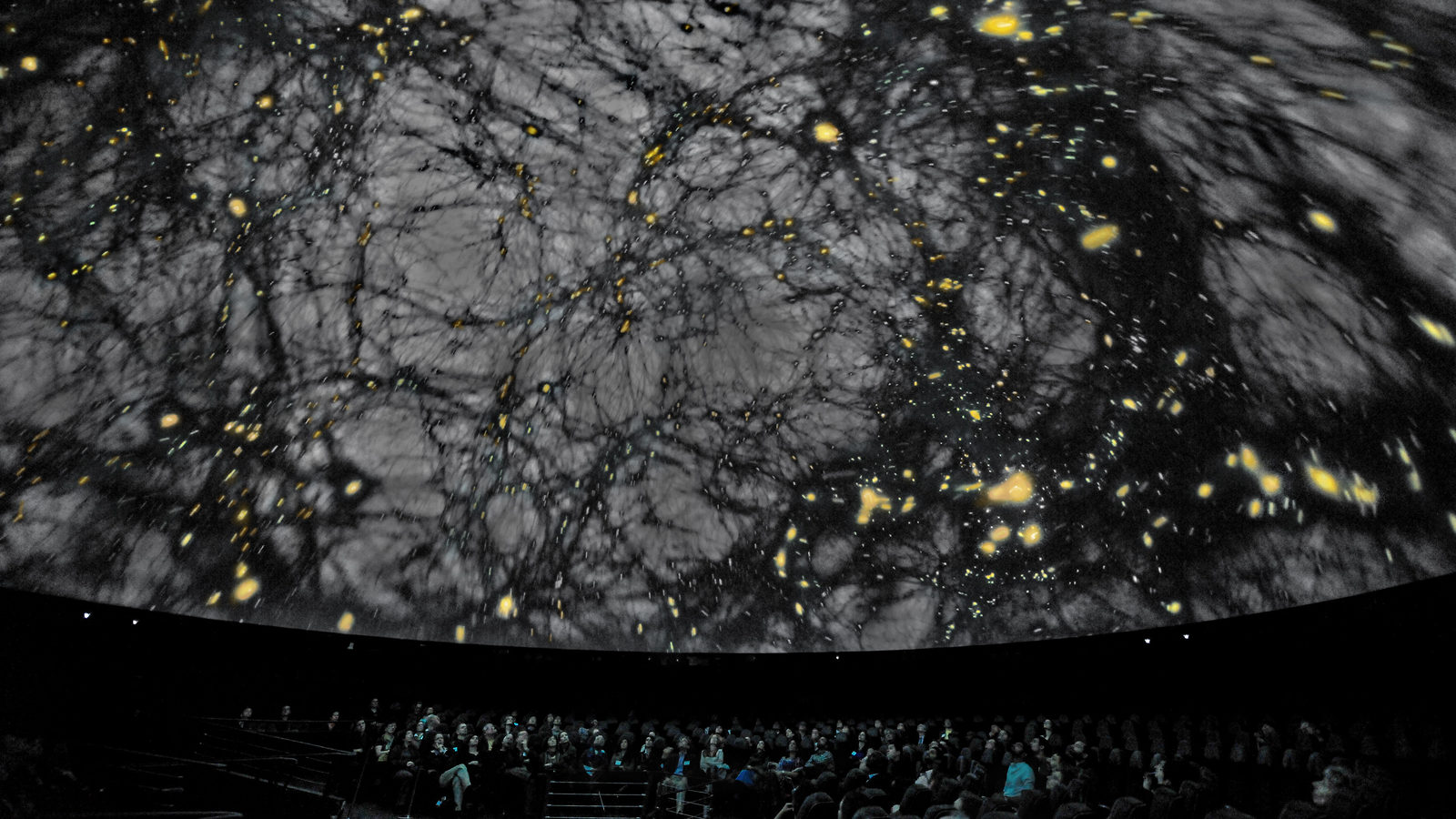 Planetarium shows are a wonderful way to introduce people to the beauty of the night sky. Sit back, look up and let the glory of the Milky Way explode into view above. For city dwellers, it‘s the best view of the night sky for miles.

But the latest planetarium show at the Hayden Planetarium, located in the American Museum of Natural History in New York City, doesn’t focus on what we can see—the stars, planets, nebulae and moons known to amateur star gazers the world over. It shows what we can’t see, and it uses rigorous science in the form of computer simulations to do it.

“The Dark Universe,” which opened November 2, is an exploration of two invisible but powerful influences on the evolution of our universe: dark matter, that unseen stuff currently detectible only by its gravitational influence on other matter; and, even more mysterious, dark energy, which is responsible for the increasing rate at which the universe is pulling itself apart. Studying the effects of dark matter and dark energy enables astrophysicists to simulate their development over different times in the history of the universe and to render these simulations into state-of-the-art high-definition video.

Scientists from the Kavli Institute for Particle Astrophysics and Cosmology, located at SLAC National Accelerator Laboratory and Stanford University, have done just that. Two KIPAC-created scenes of dark matter shaping the structure of the universe are included in the Hayden Planetarium show.

They worked hard to provide a cinematic experience, Kaehler says. “You can visualize the same data in a million different ways, depending on which properties you want to highlight, which camera path you choose or which color palette you use,” he says. In the end, in addition to being scientifically accurate, Kaehler says, “it’s got to be fun to watch.”

A standard technique in computer graphics is to create three-dimensional figures using collections of polygons—often triangles—as the scaffolding over which the picture itself is stretched. The more polygons used, the better the representation. A new visualization technique developed by Abel, Hahn and Kaehler—and employed in the show—ups the polygon count, drastically improving image quality.

“About 10 billion triangles were generated for each frame of the animation—over 1000 times more than what is used for scenes in current video games,” Kaehler says. The scenes were rendered with up to 100-megapixel resolution.

This technique required a lot of computing power. To deliver the final images in time for the premiere of the show, Kaehler had to speed up the task using special algorithms executed on graphics processing units. By the time he was finished creating the four minutes of video he supplied to the museum‘s team, he had generated more than a terabyte of image data.

“We had to ship hard drives back and forth to each other to exchange image data,” Kaehler says. But “using the numerical representations instead of just making it up is the whole point of creating this for a planetarium show. We hope we created scenes that help people understand the important role of dark matter in shaping the universe.”