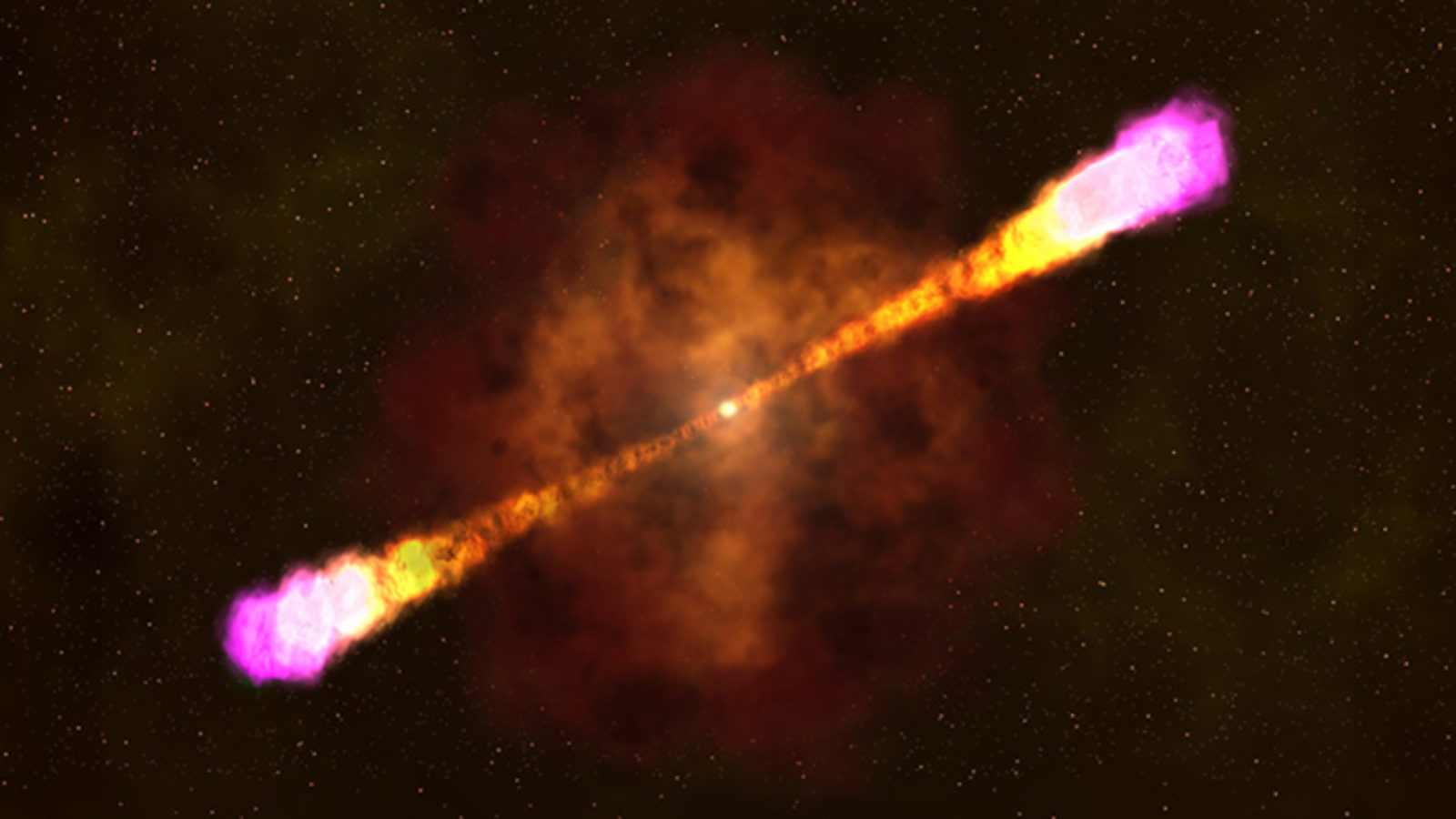 On April 27, a blast of light from a dying star in a distant galaxy washed over Earth. A trio of satellites, working in concert with ground-based robotic telescopes, captured the event, which was one of the brightest such “gamma-ray bursts” ever seen. Those observations are now challenging current theoretical understanding of how gamma-ray bursts work.

“We expect to see an event like this only once or twice a century, so we’re fortunate it happened when we had a large array of sensitive space telescopes with complementary capabilities available to see it,” says Paul Hertz, director of NASA’s astrophysics division, which oversees several of the telescopes that saw the explosion.

Gamma-ray bursts are the most luminous explosions in the cosmos. Astronomers think most occur when the core of a massive star runs out of nuclear fuel, collapses under its own weight, and forms a black hole. The baby black hole then accelerates jets of particles that drill all the way through the collapsing star and erupt into space at nearly the speed of light.

This causes a burst of light in many wavelengths. Optical light is emitted from the eruption, while hot matter surrounding the black hole and internal shock waves produced by collisions within the jet are thought to emit gamma rays with energies in the million-electronvolt range, or roughly 500,000 times the energy of visible light. The highest-energy emission, with billion-electronvolt gamma rays, is thought to arise when the jet slams into its surroundings, forming an external shock wave.

Yet, says Rob Preece of the University of Alabama, Huntsville, “the spectacular results... show that our widely accepted picture of [high-energy] gamma rays from internal shock waves is woefully inadequate.”

Just as the optical flash peaked, the Fermi Gamma-ray Space Telescope detected a spike in billion-electronvolt gamma rays, providing the first detailed look at the relationship between a burst’s optical light and its high-energy gamma rays. The result defied expectations.

“We thought the visible light for these flashes came from internal shocks, but this burst shows that it must come from the external shock, which produces the most energetic gamma rays,” says Sylvia Zhu, a Fermi Gamma-ray Space Telescope team member at the University of Maryland in College Park.

More puzzling is a 32-billion-electronvolt gamma ray, which was detected nine hours after the burst’s onset. A late arrival with this kind of energy raises questions about how well scientists really understand the physics of the external shock wave.

The burst’s extraordinary brightness enabled NASA’s newest X-ray observatory, the Nuclear Spectroscopic Telescope Array (NuSTAR), to make a first-time detection of a burst afterglow in high-energy, or “hard,” X-rays after more than a day.

Taken together with data from the Fermi Gamma-ray Space Telescope, these observations challenge both a 30-year-old prediction limiting the highest-energy light and a 12-year-old prediction of how different emission mechanisms should shift in prominence as the burst fades.

This gamma-ray burst is the subject of five papers published online Nov. 21. Four of these, published by Science Express, highlight contributions by Fermi, Swift and RAPTOR. The NuSTAR study is published by The Astrophysical Journal Letters.

A version of this article was issued by NASA.
Follow
Use your browser’s print dialog box to create a pdf.
Latest news articles
Berkeley Lab