For thousands of years, humanity has relied on light to reveal the mysteries of our universe, whether it’s by observing the light given off by brightly burning stars or by shining light on the very small with microscopes.

Yet, according to recent evidence, scientists think that only about 5 percent of our universe is made of visible matter—ordinary atoms that make up nearly everything we can see, touch and feel. The other 95 percent is composed of the so-called dark sector, which includes dark matter and dark energy. These are described as “dark” because we observe their effects on other objects rather than by seeing them directly. Now, to study the dark, scientists are turning to what they know about light, and they are pointing to a recently successful test of experimental equipment that suggests an exploration of the dark sector may be possible at Jefferson Lab.

We know that the particles of light, photons, interact with visible matter and its building blocks—protons, neutrons and electrons. Perhaps the same is true for dark matter. In other words, does the visible photon have a counterpart, a dark photon, that interacts with the components of dark matter?

In a recent interview, Milner said that the dark photon may bridge the dark and light sectors of our universe.

“Such particles are motivated by the assumption that dark matter exists and that it must somehow couple to the standard matter in the universe. And these dark photons kind of straightforwardly could do that,” he explains.

According to theory, the dark photon is very similar to the light photon, except that it has mass and interacts with dark matter. The dark photon is sometimes referred to as a heavy photon or as a particle dubbed the A’ (pronounced “A prime”). If the dark photon also interacts with ordinary matter, it may be coaxed out of hiding under just the right conditions. In fact, Milner says that scientists may have already caught glimpses of the effects of dark photons in data from particle physics and astrophysics experiments.

Hints of dark photons in data past

For instance, dark photons may play a role in explaining the data in the Muon g-2 experiment (pronounced “Moo-on g minus two experiment”) that was conducted at Brookhaven National Laboratory in 2001. Muons are particles that can be thought of as heavier cousins of electrons.

“If this is real, such a discrepancy could be explained by a dark photon of the type and mass that DarkLight is searching for,” Milner says.

Other evidence of dark photons may be found in astrophysics.

When a measurement was made of high-energy electron–positron pairs in outer space, there were more than could be explained by production from cosmic rays, suggesting that something else, such as dark photons, produces extra pairs.

“Also, there are indications from the center of our galaxy that there is radiation which might be consistent with the dark photon,” Milner adds.

If dark photons are giving rise to these observed phenomena, it means that they do interact with visible matter, if ever so rarely. It also means that the effect should be reproducible and measurable by experimenters.

“This dark photon that we expect could be seen by emission from a charged particle beam, like an electron beam. So an electron beam can radiate such a dark photon,” Milner explains. “So, we looked around, and the world’s most powerful electron beam is at the Jefferson Lab Free-Electron Laser. It has about 1 megawatt of power in the beam. And so that’s how we arrived at Jefferson Lab; it’s absolutely unique in the world.”

The scientists drafted a proposal that calls for aiming the beam at the protons in a target of hydrogen gas. MIT theorist Jesse Thaler, whose group has carried out important calculations for DarkLight, proposed the name for the experiment, based on the method that will be used to carry it out (DarkLight: Detecting a Resonance Kinematically with Electrons Incident on a Gaseous Hydrogen Target).

The experimenters chose hydrogen, because its atoms consist of just one proton with an orbiting electron. When the electrons from the accelerator strike the protons in the hydrogen, they’ll knock the protons out of the target.

“So if we do it at sufficiently low energies, we know the final state is simple—it’s just the scattered electron, the proton and the electron–positron pair, which could come from this decay of the dark photon,” Milner explains.

The experiment was approved on the condition that the collaboration could show that they were up to the technical challenges of conducting it. Milner says the main challenge was to prove that the accelerator operators could get an electron beam through the narrow hydrogen target. Even though the electrons in the beam would have low energies, the beam would have a lot of them, amounting to 1 megawatt of power. That much power would destroy any container used to hold the hydrogen gas.

The experimenters decided that the gas would be pumped into a narrow pipe. The electrons would then be threaded into that same narrow pipe. At its narrowest, the pipe would need to be about 2 millimeters wide and 5 centimeters long, which is roughly the size of a round coffee stirrer.

“We decided that we really needed to do a test with a beam. So, we basically built a system, a test target system that had basically a mock-up of apertures, 2-millimeter-, 4-millimeter- and 6-millimeter-diameter apertures, in an aluminum block. And we brought it to Jefferson Lab about a year ago. And in late July, we had a test,” he says. 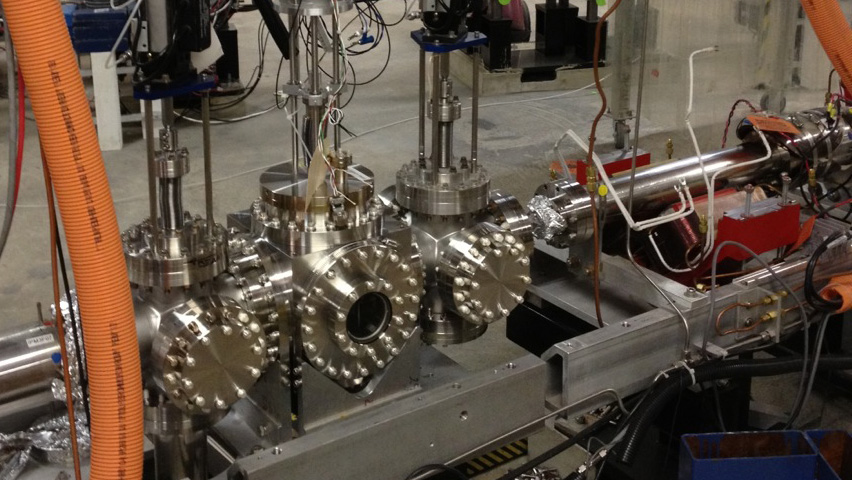 Jefferson Lab laser accelerator operators threaded an electron beam through a small tube the size of a coffee stirrer inside this apparatus to show that the DarkLight experiment was possible. DarkLight will search for dark photons, which are particles that interact with both dark matter and visible matter.

The staff at MIT-Bates Research and Engineering Center designed, constructed and delivered the test target assembly. The Jefferson Lab accelerator operators and a team from the DarkLight collaboration attempted to thread the electron beam through the narrow pipes in the aluminum block, successfully threading the beam through the 6-millimeter, then the 4-millimeter, and finally the 2-millimeter mock targets. What’s more, the electrons in the beam passed through the pipes cleanly. In the case of the smallest aperture, 2 millimeter, the operators threaded the electrons through the pipe continuously over a period of seven hours; in that time, only three electrons were lost as they struck the walls of the pipe for every million that passed cleanly through.

The DarkLight collaboration recently published the results of the successful tests in Physical Review Letters.

With this successful test, the DarkLight experiment has been approved for running. Milner says the collaboration has a lot of work ahead of it before it can run the experiment, including building the detectors that will be used to capture the protons, electrons and electron–positron pairs, and finalizing the target.

A version of this article was originally published in DOE Pulse.
Follow
Use your browser’s print dialog box to create a pdf.