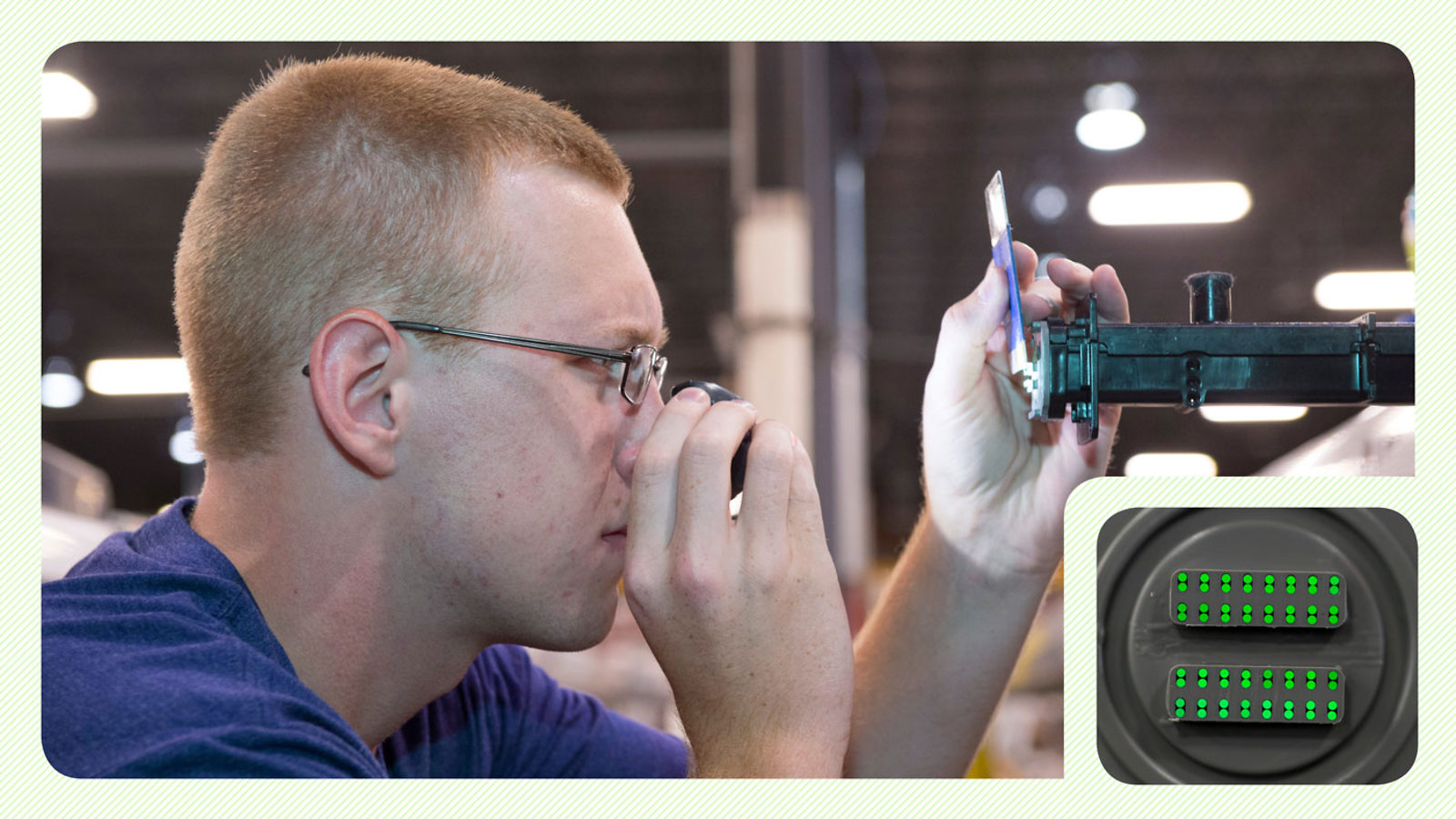 Most of the time, Sean Geldert is a typical student at the University of Minnesota. But a few hours a week, Geldert leaves his campus behind and joins a team working to build the most advanced neutrino detector in the world.

Secret identity? Hardly. When he’s not studying physics, Geldert is part of a group of about 250 students employed by the university to work on the NOvA experiment, a collaboration with Fermilab and more than 30 other institutions around the globe. Geldert works in the NOvA module facility, situated in a nondescript warehouse near campus, playing a vital part in the creation of something extraordinary.

About 300 miles north, near Minnesota’s Ash River, crews are assembling the NOvA detector, a 14,000-ton plastic structure that will be roughly 200 feet long and 50 feet high and wide. When it’s finished, scientists will use the detector to discover properties of neutrinos, perhaps the most elusive of the known subatomic particles.

But without Geldert and his fellow students, none of this would be possible. At the module facility, students assemble the plastic components of the detector—large white PVC sheets made of hollow tubes with fiber optics run through them. These components make up both the detector and the detector’s support structure.

According to facility manager Nathaniel Pearson, the team aims to build 30 of these modules each day, and it’s an exacting process. The machine Geldert operates, for example, runs the fragile fiber optics through each cell of the 50-foot module while keeping the tension constant and continuously measuring the light transmitted throughout. Other students glue plastic parts to the module to seal it, test each module for leaks and pack them in truckloads for shipping to Ash River. With the precision required for every step of this process, it’s remarkable that the day-to-day operation of the module facility is largely in the hands of the students. 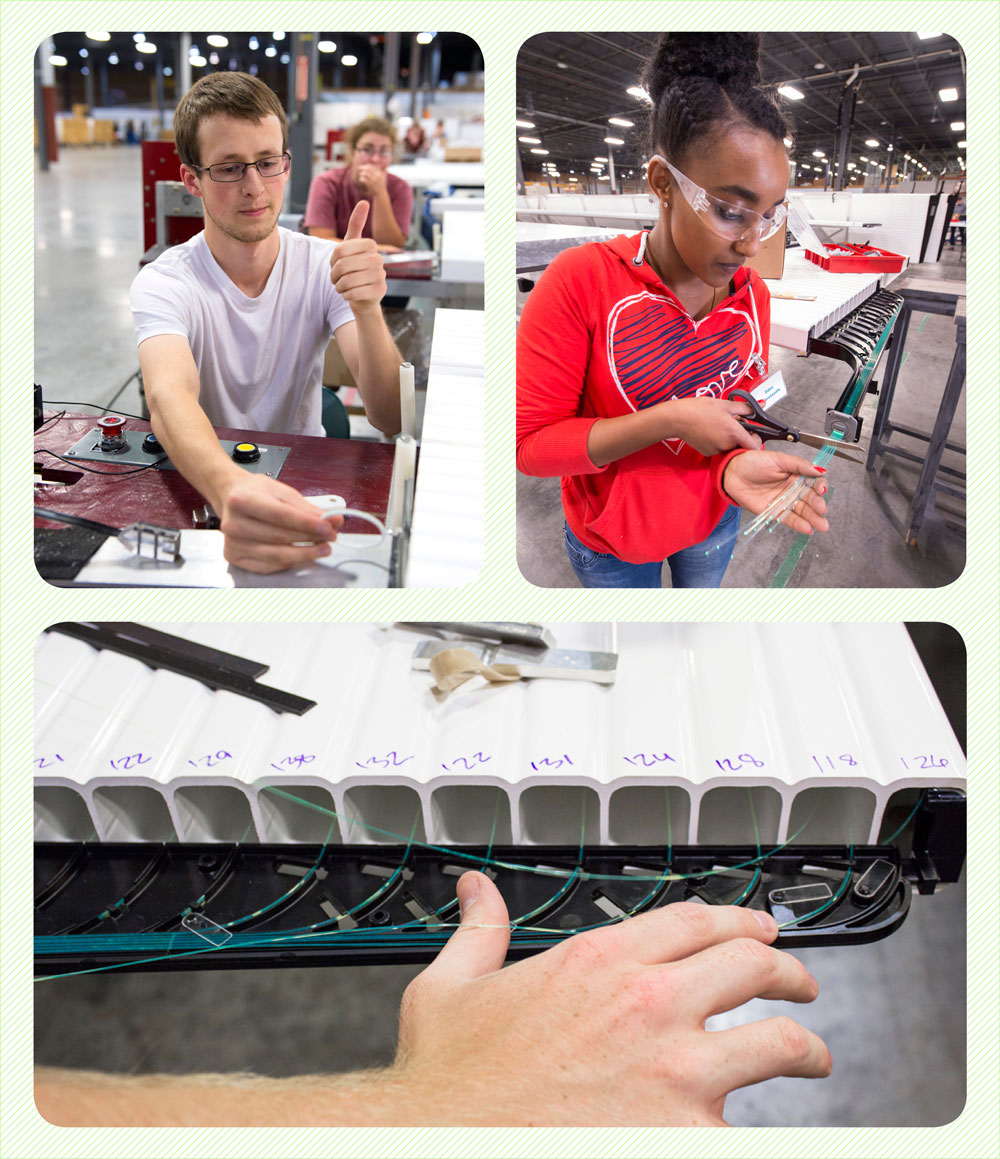 Students at the NOvA assembly facility cut and check fibers (also pictured at the top of the page), and carefully thread them through 50-foot module cells.

The facility is the brainchild of Ken Heller, a physics professor at the university. Pearson, Heller and mechanical engineering professor Tom Chase first teamed up in the late 1990s, similarly employing students to build components for the MINOS neutrino detector, located in the Soudan Mine in northern Minnesota. Although that was on a much smaller scale, Heller says, it proved the concept: Large-scale student-run construction facilities can work.

“I think there were some people who thought that it was probably not possible to build a big detector like NOvA, one that has to be done so precisely, with students,” Heller says. “We were convinced, of course, that it was possible, and the students are actually great workers.”

At any given time, there are only about a dozen non-students in the facility—and many of them worked at the factory during their undergraduate years. Students often supervise other students. Since each juggles different class schedules, shifts are flexible. Students put in for preferred hours, and a complex piece of software keeps track of attendance and work quality and grants those preferences to the best workers.

Students designed many of the processes and machines that run the facility, including that software. Pearson, who has been with the NOvA module facility since its inception six years ago, has watched it grow from a small operation to the vast clockwork it is today. The secret, he says, is letting the students become the teachers.

“When I started, it was me, and I would bring in one person and teach them one thing,” Pearson says. “Very quickly in the process, they would start teaching the next generation. So you have to hire good people, trust them and let them go and learn for themselves how to do it so they become masters.” 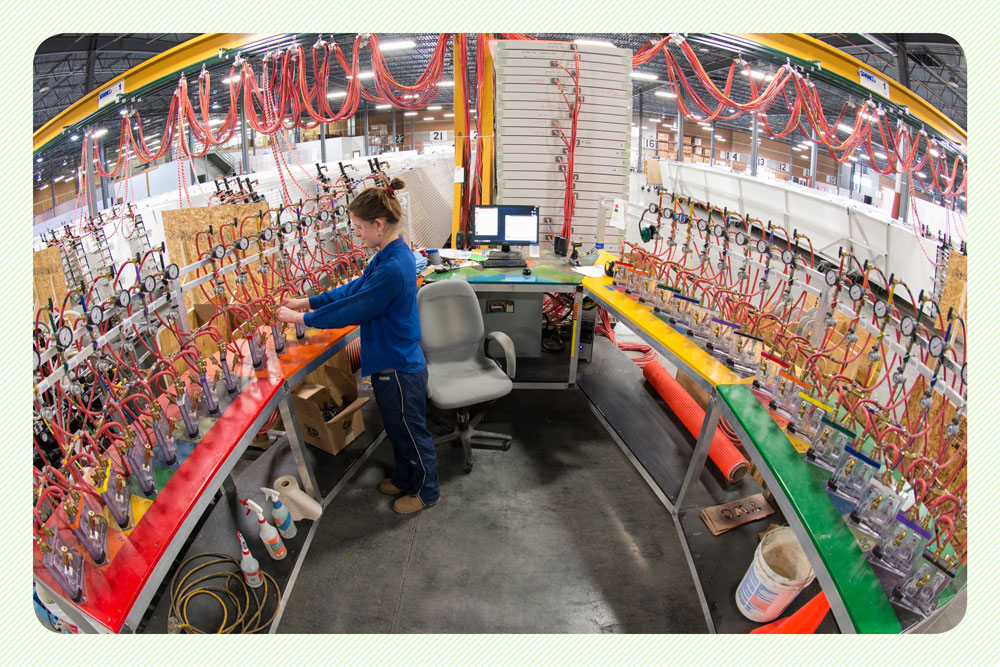 Geldert was one of the first students to learn how to use the machine he operates, and now he teaches others how to run it and keeps track of the quality. Geldert says his time at the NOvA module facility, which students call “the factory,” has taught him how to work with people, particularly his peers. His managerial experience here, he says, will definitely help him in the working world.

If he needs proof, he can simply ask some of the students who have cycled through the facility in its six years of operation. For instance, there is Ian Young, who worked on NOvA from August 2011 to April 2013 while studying engineering at the university. Young says the experience helped boost his confidence in the workplace and in every job interview he’s had. “I always know that I can mention that I helped build one of the largest particle research facilities in the world,” he says.

“After leaving NOvA, I gained an entry-level position at an engineering firm, which was almost entirely based on the skills I learned on the job while working in the factory,” Young says. “The machining experience I gained there was very relevant to the job I have now in hydraulic and pneumatic engineering.”

More than 500 students have worked at the module facility since it opened. Most of those students, Pearson says, have no practical experience when they start, but by the time they’re ready to leave, they have “gained the confidence to know that they can make a difference in the workplace.”

April Ruggles, an engineering student who worked at NOvA from August 2010 to August 2012, says she credits her time at the facility with much of her later success as a mechanical engineer at IBM in North Carolina, designing parts and circuit boards for high-end servers.

“At NOvA I learned how to weld, how to use a drill press, a mill, a lathe,” Ruggles says. “When you know the machines that are used to make parts, you have a much better understanding of what is actually feasible when you design. It is not something that can be taught in a class.”

Like Geldert, Ruggles was a manager at one of the NOvA workstations. It was her first experience managing people, and she says it taught her how to motivate and communicate with people in a workplace and how to deal with pressure—skills she has put to good use at IBM.

“I think I would be quite lost here if I hadn’t had my experience at NOvA,” she says.

Although much of the work that occurs in the module facility is detailed and focused, the students definitely gain a sense that they play a part in one of the world's largest physics experiments.

Module production remains about two months ahead of the far detector assembly in Ash River, and the entire construction is expected to be completed in 2014.

“It’s amazing to watch all this come together,” Heller says. “Even though I was involved in designing all the pieces and I’ve been watching it since its inception, still every day that I come here, there’s some awe involved in all the operations going on in order to make this detector come together.”

Geldert says he finds it exciting and a little bit humbling.

“It didn’t really hit me until I took a tour of Ash River,” he says. “I saw a lot of the work that I was doing, specifically at this station. It’s definitely an interesting feeling, knowing that I am part of something bigger than me.”