The NOvA detector has seen its first neutrino oscillations. 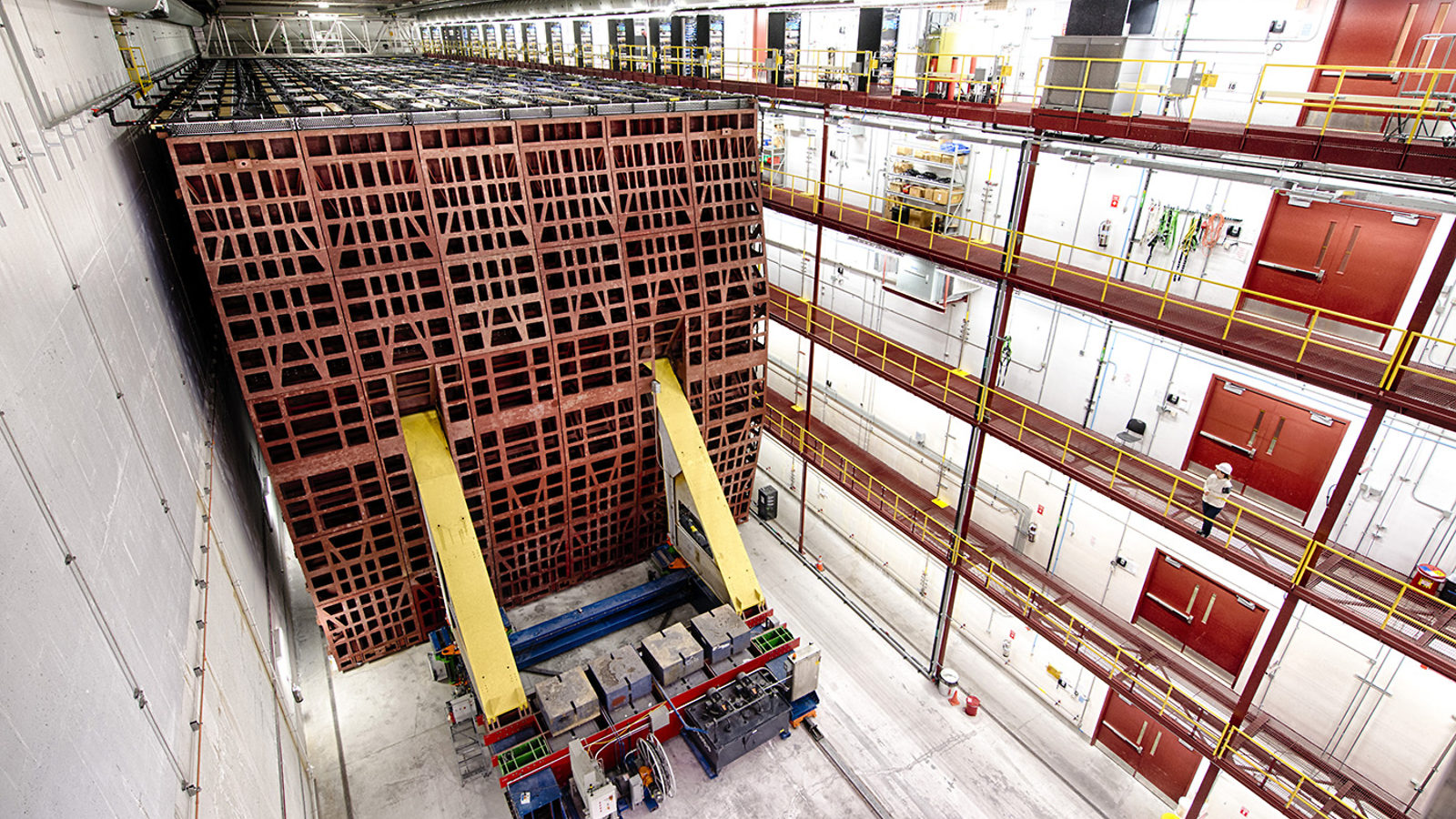 Scientists on the NOvA experiment saw their first evidence of oscillating neutrinos, confirming that the extraordinary detector built for the project not only functions as planned, but is also making great progress towards its goal of a major leap in our understanding of these ghostly particles.

NOvA is on a quest to learn more about the abundant yet mysterious particles called neutrinos, which flit through ordinary matter as though it weren’t there. The first NOvA results, released this week at the American Physical Society’s Division of Particles and Fields conference in Ann Arbor, Michigan, verify that the experiment’s massive particle detector—50 feet tall, 50 feet wide, and 200 feet long—is sitting in the sweet spot and detecting neutrinos fired from 500 miles away. Scientists have sorted through millions of cosmic ray strikes and zeroed in on neutrino interactions.

“People are ecstatic to see our first observation of neutrino oscillations,” says NOvA co-spokesperson Peter Shanahan of Fermi National Accelerator Laboratory. “For all the people who worked over the course of a decade on the designing, building, commissioning and operating this experiment, it’s beyond gratifying.”

Researchers have collected data aggressively since February 2014, recording neutrino interactions in the 14,000-ton far detector in Ash River, Minnesota, while construction was still underway. This allowed the collaboration to gather data while testing systems before starting operations with the complete detector in November 2014, shortly after the experiment was completed on time and under budget. NOvA construction and operations are supported by the US Department of Energy’s Office of Science.

The neutrino beam generated at Fermilab passes through an underground near detector, which measures the beam’s neutrino composition before it leaves the Fermilab site. The particles then travel more than 500 miles straight through the earth, no tunnel required, oscillating (or changing types) along the way. About once per second, Fermilab’s accelerator sends trillions of neutrinos to Minnesota, but the elusive neutrinos interact so rarely that only a few will register at the far detector.

When a neutrino bumps into an atom in the NOvA detector, it releases a signature trail of particles and light depending on which type it is: an electron, muon, or tau neutrino. The beam originating at Fermilab is made almost entirely of one type—muon neutrinos—and scientists can measure how many of those muon neutrinos disappear over their journey and reappear as electron neutrinos.

Similar long-distance experiments such as T2K in Japan and MINOS at Fermilab have seen these muon neutrino to electron neutrino oscillations before.

“The electron neutrino excess is very intriguing,” says physicist Morgan Wascko of Imperial College London, international co-spokesperson of the T2K experiment. “It’s consistent with our neutrino-mode result. It starts to highlight the complementarity between T2K and NOvA.”

NOvA will continue to take data for at least six years.

“One of the reasons we’ve made such excellent progress is because of the impressive Fermilab neutrino beam and accelerator team,” says NOvA co-spokesperson Mark Messier of Indiana University. “Having a beam of that power running so efficiently gives us a real competitive edge and allows us to gather data quickly.”

Fermilab’s flagship accelerator recently set a high-energy neutrino beam world record when it reached 521 kilowatts, and the laboratory is working on improving the neutrino beam even further for projects such as NOvA and the upcoming Deep Underground Neutrino Experiment. Researchers expect to reach 700 kilowatts early next calendar year, accumulating a slew of neutrino interactions and tripling the amount of data recorded by year’s end.

Neutrinos are the most abundant massive particle in the universe, but are still poorly understood. While researchers know that neutrinos come in three types, they don’t know which is the heaviest and which is the lightest. Figuring out this ordering—one of the goals of the NOvA experiment—would be a great litmus test for theories about how the neutrino gets its mass. While the famed Higgs boson helps explain how some particles obtain their masses, scientists don’t know yet how it is connected to neutrinos, if at all. The measurement of the neutrino mass hierarchy is also crucial information for neutrino experiments trying to see if the neutrino is its own antiparticle.

Like T2K, NOvA can also run in antineutrino mode, opening a window to see whether neutrinos and antineutrinos are fundamentally different. An asymmetry early in the universe’s history could have tipped the cosmic balance in favor of matter, making the world we see today possible. Soon, scientists will be able to combine the neutrino results obtained by T2K, MINOS and NOvA, yielding more precise answers about scientists’ most pressing neutrino questions.

“The rapid success of the NOvA team demonstrates a commitment and talent for taking on complex projects to answer the biggest questions in particle physics,” says Fermilab Director Nigel Lockyer. “We’re glad that the detectors are functioning beautifully and providing quality data that will expand our understanding of the subatomic realm.”

The NOvA collaboration comprises 210 scientists and engineers from 39 institutions in the United States, Brazil, the Czech Republic, Greece, India, Russia and the United Kingdom.