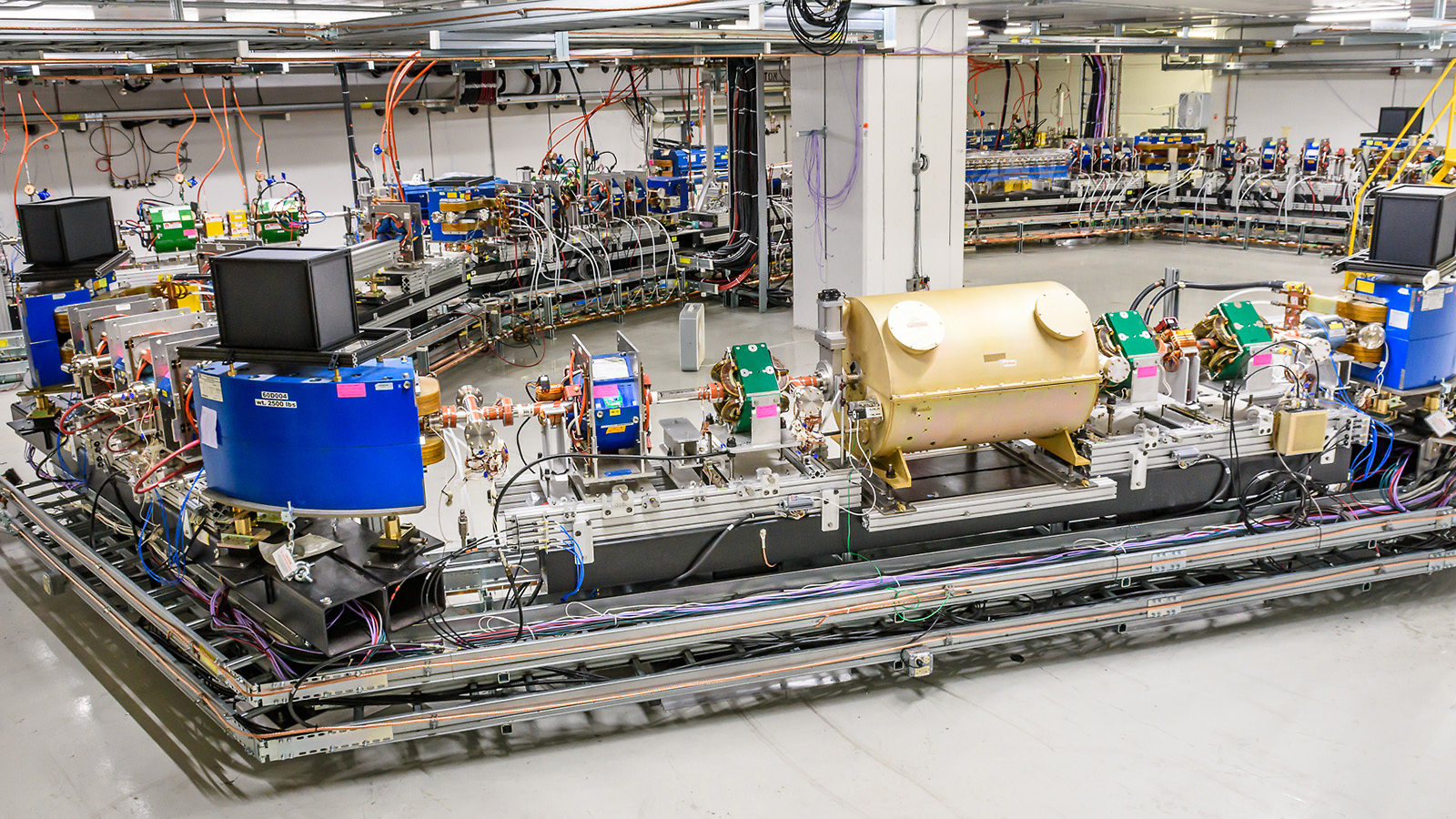 On August 21, a beam of electrons successfully circulated for the first time through a new particle accelerator at the US Department of Energy’s Fermi National Accelerator Laboratory.

The milestone marks the beginning of a research program that positions the particle storage ring, called the Integrable Optics Test Accelerator, as a standout among the world’s accelerators—an innovative test bed dedicated to the science of particle acceleration. A high-precision machine with a flexible configuration, it will allow researchers to test theories, make discoveries and create inventions that push past the limits of existing machines.

“We’ve built a modern, next-generation accelerator for beam physics research that will have impacts in multiple areas of science,” says Vladimir Shiltsev, head of the Fermilab Accelerator Physics Center. “It opens opportunities for a new era of accelerators.”

The centerpiece of the Fermilab Accelerator Science and Technology facility, IOTA will send electrons and protons around its 40-meter circumference, giving scientists the latitude to explore new ways of manipulating particle beams that will pay dividends in other fields.

When Fermilab scientists began planning IOTA, about 10 years ago, they set out to design a machine for the deep exploration of techniques that could advance the numerous scientific fields that depend on accelerators. They came up with an elegant, compact ring for testing the concepts that they judged to be the most important.

“IOTA is one of a kind—a particle storage ring designed and built specifically to host novel experiments with both electrons and protons and develop innovative concepts in accelerator science,” says Fermilab physicist Alexander Valishev, head of the team that developed and constructed IOTA.

Fermilab has formed partnerships with others interested in advancing accelerator science and technology at FAST. The facility has already attracted 29 institutional partners, including European institutions, US universities, national laboratories and members of industry.

The achievement of first beam is the pinnacle of many years of that intense, collaborative work.

“An eager and highly motivated group of particle beam physicists from universities and laboratories around the world have been awaiting the completion of IOTA for fundamental research,” says Northern Illinois University President’s Research Professor and Director of Accelerator Research Swapan Chattopadhyay, Fermilab distinguished scientist. “We congratulate the IOTA team for having reached this significant milestone.”

The beam’s the thing

Usually, the accelerators that make headlines—such as CERN’s Large Hadron Collider in Europe—operate in service to studies of the basic properties of subatomic particles. By accelerating particle beams to close to light speeds and smashing them apart, these machines expose nature’s fundamental constituents in the ensuing debris, allowing scientists to study them.

IOTA is different. The 40-meter-circumference ring will accelerate beams to investigate not particles emerging from collisions but rather the beams themselves. It’s one of only a handful of accelerators in the world for beam physics studies.

But even among this small group, IOTA is different. It’s also the only research accelerator that will be able to switch between beams of electrons and protons. (IOTA’s first proton beams are expected in 2019.)

And whereas many other research accelerators are linear, meaning that the beam travels down a straight path, IOTA is a circular accelerator dedicated to beam studies. This means it can send beam around its 40-meter path thousands to millions of times. With each pass, various beam effects are amplified, enabling scientists to better understand how they arise in the first place. It’s a way to mimic the processes limiting the operation of much larger and higher-energy machines, from Fermilab proton accelerators to the LHC and future supercolliders.

“This facility offers a flexibility that can be useful to a wider community—above and beyond the needs of high-energy physics,” Valishev says.

“Running beam physics studies in an operational particle physics machine is a tremendous challenge. You can’t really mess with the background environment, the beam losses,” says Shiltsev, referring to undesirable beam effects. “But accelerator physicists want to mess with the beam losses, to study them in detail and explore ways to suppress them. We want to push those effects to their maximum.”

And they can take the knowledge they gain from that boundary-pushing to the drawing board to improve the design of future particle physics machines—and accelerators for everyday life.

Over 30,000 particle accelerators are in operation in the world. Most are used in industry and for broad applications, such as for the environment or medicine. Accelerators for cancer research use X-rays generated with a small electron accelerator in a hospital or produce medical isotopes for imaging.

In other words, innovations from IOTA could help improve human health. 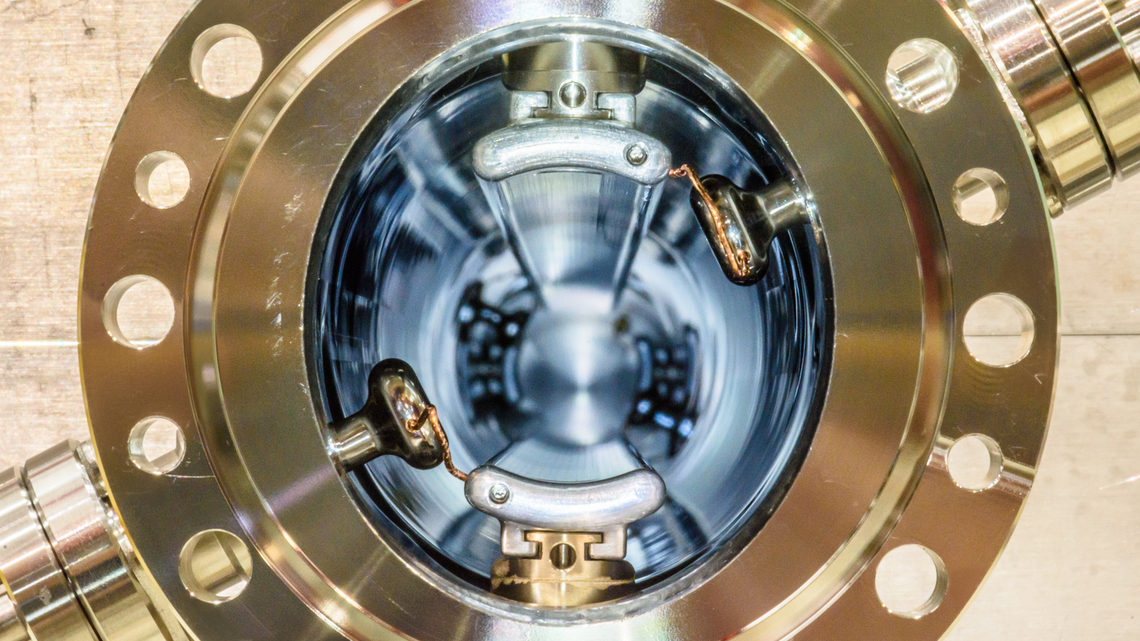 The IOTA kicker removes packets of particles from the particle beam.

What’s in a beam?

IOTA’s rich research program spans the gamut from shaping beams packed with hundreds of millions or billions of electrons or protons to examining beams made of only a single particle. Scientists will use IOTA to explore multiple beam acceleration technologies, including several that have been proposed but never realized.

“With IOTA, scientists from around the world will be able to use the next-generation accelerator to collaborate and test innovative ideas, finding ways to reach the next level of accelerator beam power,” says Fermilab Head for Accelerator Science Programs Sergei Nagaitsev, one of the researchers who proposed the IOTA concept.

One area that could dramatically change the world of accelerators is the capability for generating ultrahigh-intensity beams.

Roughly translated, “intensity” is the number of particles that form a beam. The more particles a beam can carry, the more that can be smashed together at a time, and the more you can speed up the timeline for discovery. High intensity is a high priority for the field of particle physics.

But unchecked, an increasingly intense beam becomes increasingly unstable and can produce unwanted effects, including beam loss phenomena, in which particles depart from the pack. That limits the beam’s performance, making it far less useful for discovery.

“We want to push the physics to do more, so we have to push the beam to lose less,” Shiltsev says. “Having this ring gives us the chance to really understand how to attack this problem.”

Accelerator scientists have proposed various methods to tame or compensate for beams’ unruly behavior. With IOTA, scientists have a high-tech platform to fully explore these techniques, including several that could not be tested previously. One of them uses low-energy electrons as a kind of focusing lens. Another uses instruments collectively known as integrable optics—the “IO” in IOTA.

“These are new techniques for beam control,” Shiltsev says. “Nobody’s done this before.”

But “IO” is only the beginning.

With IOTA, accelerator scientists will also capitalize on Fermilab’s existing strengths in beam acceleration. Beam cooling, for example, is a method for creating tighter, more orderly beams, making them easier to manipulate and accelerate. Fermilab has a strong history in its development. Between 2005 and 2011, it operated the highest-energy electron cooler in the world.

The focus of the current beam cooling effort has a fancy name: optical stochastic cooling. Building on the lab’s current expertise, IOTA scientists will take the technology to the next level.

“If the technology is successful, it could pave the way for electron-ion colliders in an energy range that isn’t currently accessible,” Valishev says.

IOTA invites research in other tantalizing topics. For example, scientists can use the test accelerator to dive deep into little understood quantum phenomena, such as the physics of beams made of a single electron. Scientists could learn whether their behavior is “textbook or has some additional strangeness,” Shiltsev says.

“We can get to the essence of the deep quantum physics of these objects. So there are other nice things we can do using IOTA—unique experiments in fundamental physics,” Shiltsev says.

“While IOTA promises to open up new vistas to reach higher-intensity charged particle beams in the future, more fundamentally it will allow, for the first time in history, classical feedback control of a single electron,” Chattopadhyay says. “We want to understand how its quantum nature blurs this point-like fundamental particle in space.”

With first beam comes both the satisfaction of accomplishment and the prospect of doing impactful science.

“Seeing first beam in a research accelerator is a rare experience in the life of a scientist, or an accelerator physicist, when you know you’ve accomplished something big—even though it’s just first beam,” Valishev says. “I’m proud for our team.”

Over the next year, the Fermilab team will install the device that will supply protons to IOTA, the proton injector. Once it is in place, it will complete the trio of particle accelerators that make up the FAST facility: the proton injector, the electron injector (completed in 2017) and the IOTA ring.

“IOTA is unique, and what’s ahead is years of exciting, very interesting research,” Shiltsev says. ” We look eagerly forward to it.”