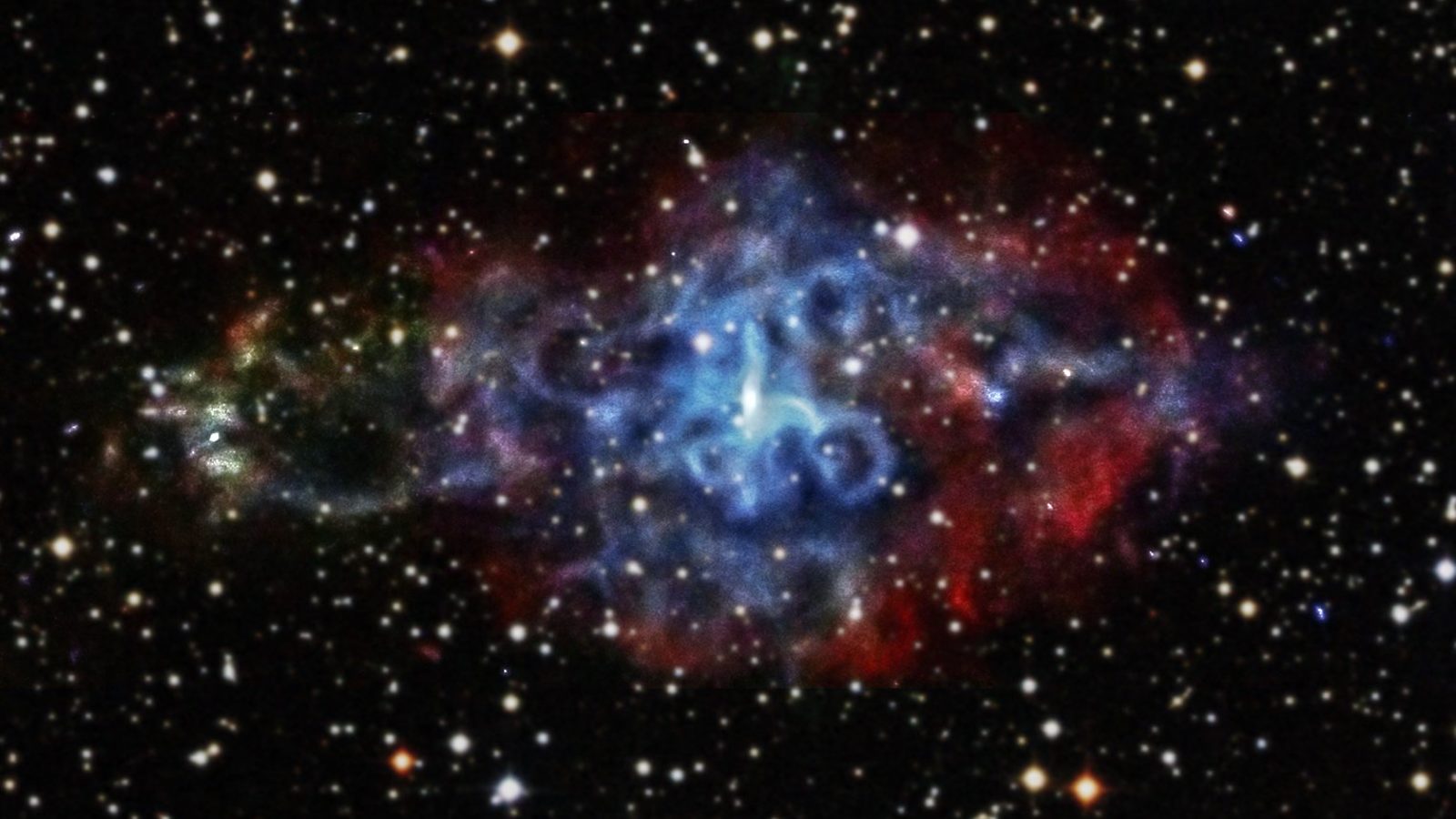 Scientists know a thing or two about neutron stars, the compacted remains of massive stars that have burned out.

They know that they’re about 95% made up of neutrons. They know that they’re generally 13 to 16 miles in diameter. Scientists know that, even though neutron stars are a thousandth the size of the Earth, they’re more massive than the sun. And the closest one they know of is about 500 light-years away.

“Neutron stars are the most dense objects in the universe,” says Laura Fabbietti, a physicist on the ALICE experiment and a professor at Technische Universität München in Germany. “And we don’t know what’s inside because we cannot fly there and look inside.”

But scientists at CERN have found a way to learn more about the interior of neutron stars from a location that is much safer and easier to access: the Large Hadron Collider, right here on Earth.

For neutron stars, gravity becomes extremely strong, approaching that of black holes. The force of it packs their matter down to high density.

Hyperons are akin to heavier versions of neutrons, both of which are composed of quarks.

There are six types of quarks in total. Most of the matter humans interact with, except for electrons, is built with the lightest of these quarks: up and down quarks. Neutrons, for example, are made of one up quark and two down quarks.

The next heaviest quark is called the strange quark. Replacing an up or down quark in a neutron with a heavier strange quark yields a hyperon.

Luckily for scientists who want to study this form of matter, all the different kinds of hyperons—different combinations of up, down and strange quarks—are produced in collisions in the Large Hadron Collider.

Their lives are different there. In experiments at the LHC, hyperons last for less than a billionth of a second before decaying into other, lighter particles. In neutron stars, however, hyperons should be stable. Because they would be pressed in so close together, there would be no room for their decay products to form.

Their short laboratory lifespans have made hyperons historically difficult to identify and study. But the unique capabilities of the ALICE detector at the LHC allowed Fabbietti and her research team to accurately identify the hyperon decay products and track those products back to their hyperon source. An upgrade of the ALICE detector will soon allow researchers to collect even more hyperon data.

“We’re hungry for statistics, hungry for data,” says Bernhard Hohlweger, who led analysis to identify the Xi- (pronounced zai-minus) hyperon, a hyperon with a negative electric charge. “We use everything we can get our hands on.”

Fabbietti’s group didn’t want just to find hyperons, though; they wanted to learn more about what they do. If they could understand hyperon motion in the ALICE detector, then they could hypothesize the way that hyperons might behave while inaccessibly buried in the universe’s densest stars.

The chief unknown for the ALICE researchers was the way that hyperons interact with the strong force, which binds quarks together and controls particle motion at small scales. Each kind of hyperon has its own unique mathematical function called a “potential” that explains how the hyperon interacts with the strong force to move.

“For different particle interactions, there are different potentials,” says Anthony Timmins, a member of the ALICE collaboration and a professor at the University of Houston. Timmins recently presented results on proton Xi- hyperon interactions at the annual Division of Particles & Fields meeting in Boston in July.

To figure out the Xi- hyperon potential, Fabbieti’s group first looked at a different kind of particle that comes from collisions in the LHC: the proton. Protons have never been observed to decay like short-lived LHC hyperons—and may not decay at all—making them easier to understand by comparison. On top of that, researchers already knew the proton potentials, and that those potentials cause protons to attract or repel each other based on how far apart they are.

The scientists observed that pairs of protons coming out of collisions tend to be pulled into parallel trajectories by their strong-force potentials. They used that observation and a method called femtoscopy to infer the approximate size of the particles’ collision zone.

Using femtoscopy, which relates particle motions and particle potentials to the size of collision zones, is like watching debris fly out of an explosion to figure out how big an explosive device must have been. (Only in this case, the debris also interact through the strong force.)

Having analyzed the proton pairs, the researchers then looked at pairs of protons and hyperons coming out of particle collisions. They again observed parallel motions, indicating an attractive strong-force potential at work. Because they knew the size of the collision zone from the proton pairs, the they could solve for the only unknown: the hyperon potential.

To understand and quantify this measured potential, next they needed a prediction from theory.

As it turned out, scientists had recently predicted what these potentials would be. They did it theoretically through simulations of quarks.

These simulation models are general in nature, relying only on knowledge of quarks, with no specific customizations for the LHC experiments. To the researchers’ surprise and excitement, the simulation results and the measurements from Fabbietti’s group matched.

“If we do some honest calculations and we get the result, then this result should be realized in nature,” says Tetsuo Hatsuda, a program director at the RIKEN institute in Japan, who helped lead the simulation program. And in this case, “the result was realized in nature.”

Using these precisely calculated potentials, Takashi Inoue from Hatsuda’s HAL QCD collaboration showed how Xi- hyperons should interact with neutrons in neutron star matter. Hyperons and neutrons were found to repel, unlike hyperons and protons measured in the ALICE detector. This repulsion would make neutron stars stiffer and more resistant to gravitational forces if hyperons were present.

The baton now goes to astrophysicists, who can compare predicted neutron star stiffness with their observations to help answer the question whether hyperons do indeed exist inside stars.

Fabbietti and her group plan to continue analyzing more data for different kinds of hyperons, with better precision. Fabbietti says that now “this is a factory of results,” results that show how the 17-mile, underground ring of the LHC can act as a microscope into the stars.