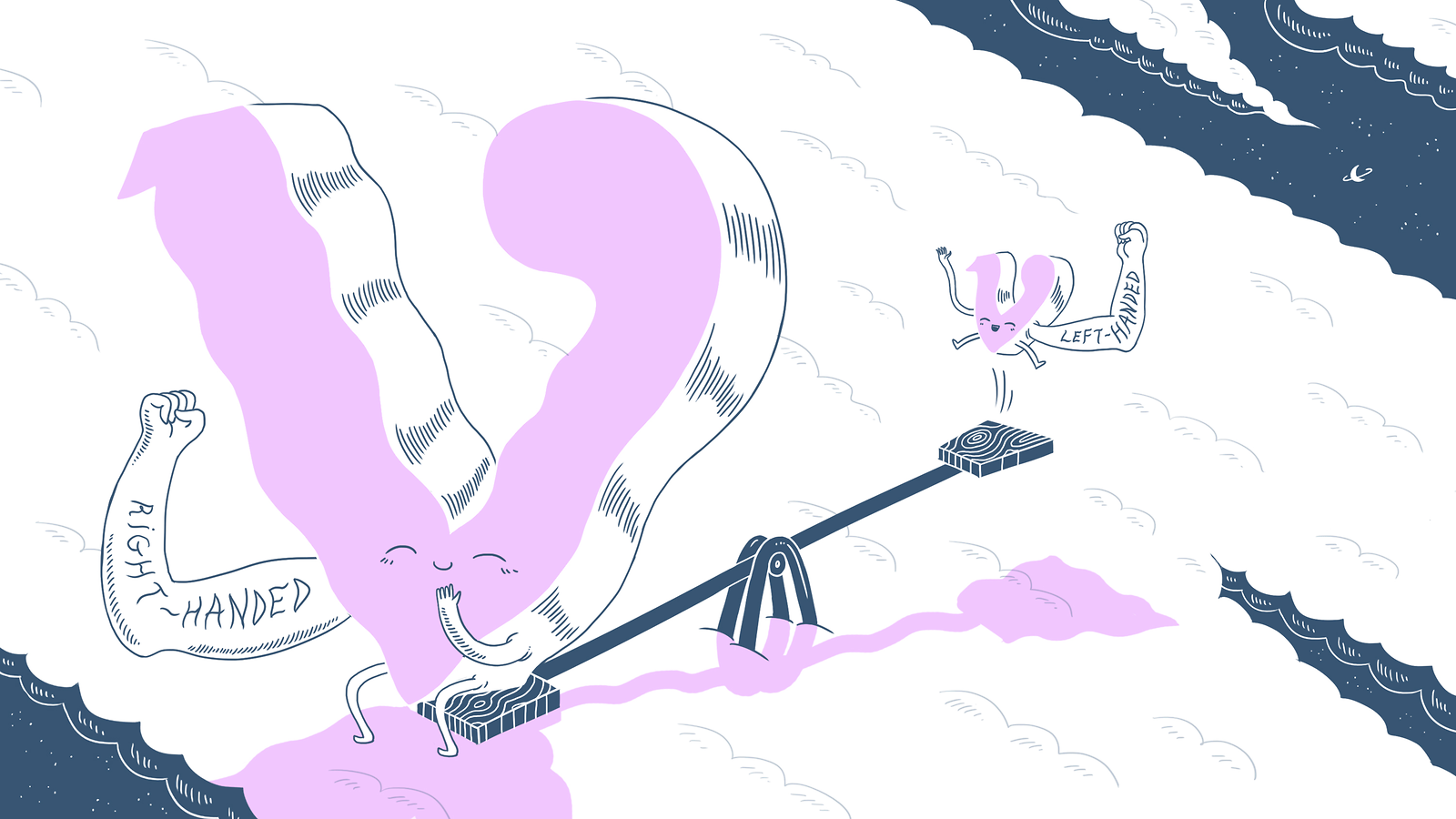 Mass is a fundamental property of matter, but there’s still a lot about it we don’t understand—especially when it comes to the strangely tiny masses of neutrinos.

An idea called the seesaw mechanism proposes a way to explain the masses of these curious particles. If shown to be correct, it could help us understand a great deal about the nature of fundamental forces and—maybe—why there’s more matter than antimatter in the universe today.

Then we have the neutrinos, which don’t fit in at all.

According to the Standard Model of particles and forces that emerged in the 1970s, neutrinos were massless. Experiments seemed to concur. However, over the next two decades, physicists showed that neutrinos change their flavor, or type.

Neutrinos come in three varieties: electron, muon and tau. Think of them as Neapolitan ice cream: The strawberry is the electron neutrino; the vanilla is the muon neutrino; and the chocolate is the tau neutrino.

By the late 1980s, physicists were reasonably good at scooping out the strawberry; most experiments were designed to detect electron neutrinos only. But they were seeing far fewer than theory predicted they should.

This discovery forced them to reconsider the mass of the neutrino, since neutrinos can oscillate only if they have a tiny—but nonzero—mass.

Today, “just from experimental facts, we know that neutrino masses are way smaller compared to all the other elementary [matter particle] masses,” says Mu-Chun Chen, a theoretical physicist at the University of California, Irvine.

We don’t yet know exactly how much mass they have, but astronomical observations 1 Looking to the heavens for neutrino masses show they’re likely around a millionth of the mass of an electron—or even less. And this small mass could be a product of the seesaw mechanism.

I am not left-handed!

To visualize another important property of neutrinos, make a “thumbs-up” gesture with your left hand. Your fingers will curl the way the neutrino rotates, and your thumb will point in the direction it travels. This combination makes for a “left-handed” particle. Antineutrinos, the antimatter version of neutrinos, are right-handed: Take your right hand and make a thumbs-up to show the relation between their spin and motion.

Some particles such as electrons or quarks don’t spin in any particular direction relative to the way they move; they are neither purely right- nor left-handed. So far, scientists have only ever observed left-handed neutrinos.

And there’s more: The seesaw mechanism predicts that if right-handed neutrinos exist, then they would be their own antiparticles. This could give us a clue to how our universe came to be full of matter.

One idea is that in the first fraction of a second after the big bang, the universe produced just a tiny bit more matter than antimatter. After most particles annihilated with their antimatter counterparts, that imbalance left us with the matter we have today. Most of the laws of physics don’t distinguish between matter and antimatter, so something beyond the Standard Model must explain the asymmetry.

Particles that are their own antiparticles can produce situations that violate some of the normal rules of physics. If right-handed neutrinos—which are their own antineutrinos—exist, then neutrinos could present the same kind of symmetry violation that might have happened for other types of matter. Exactly how that carries over to matter other than neutrinos, though, is still an area of active research for Chen and other physicists.

Searching for the seesaw

Scientists think they have yet to see these heavy right-handers for two reasons. First, the only force they know to act on neutrinos is the weak force, and the weak force acts only on left-handed particles. Right-handed neutrinos might not interact with any of the known forces.

Second, right-handed neutrinos would be too massive to be stable in our universe, and they would require too much energy to be created in even the most powerful particle accelerator. However, these particles could leave footprints in other experiments.

Today, scientists are studying the light, left-handed neutrinos that we can see to look for signs that could give us a verdict on the seesaw mechanism.

The seesaw mechanism goes hand-in-hand with grand unified theories—theories that unite the strong, weak and electromagnetic theory into a single force at high energies. If scientists find evidence of the seesaw mechanism, they could learn important things about how the forces are related.

The seesaw mechanism is the most likely way to explain how neutrinos got their mass. However, frustratingly, the nature of the explanation pushes many of its testable consequences out of experimental reach.

The best hope lies in persistent experimentation, and—as with the discovery of neutrino oscillation in the first place—hunting for anything that doesn’t quite fit expectations.