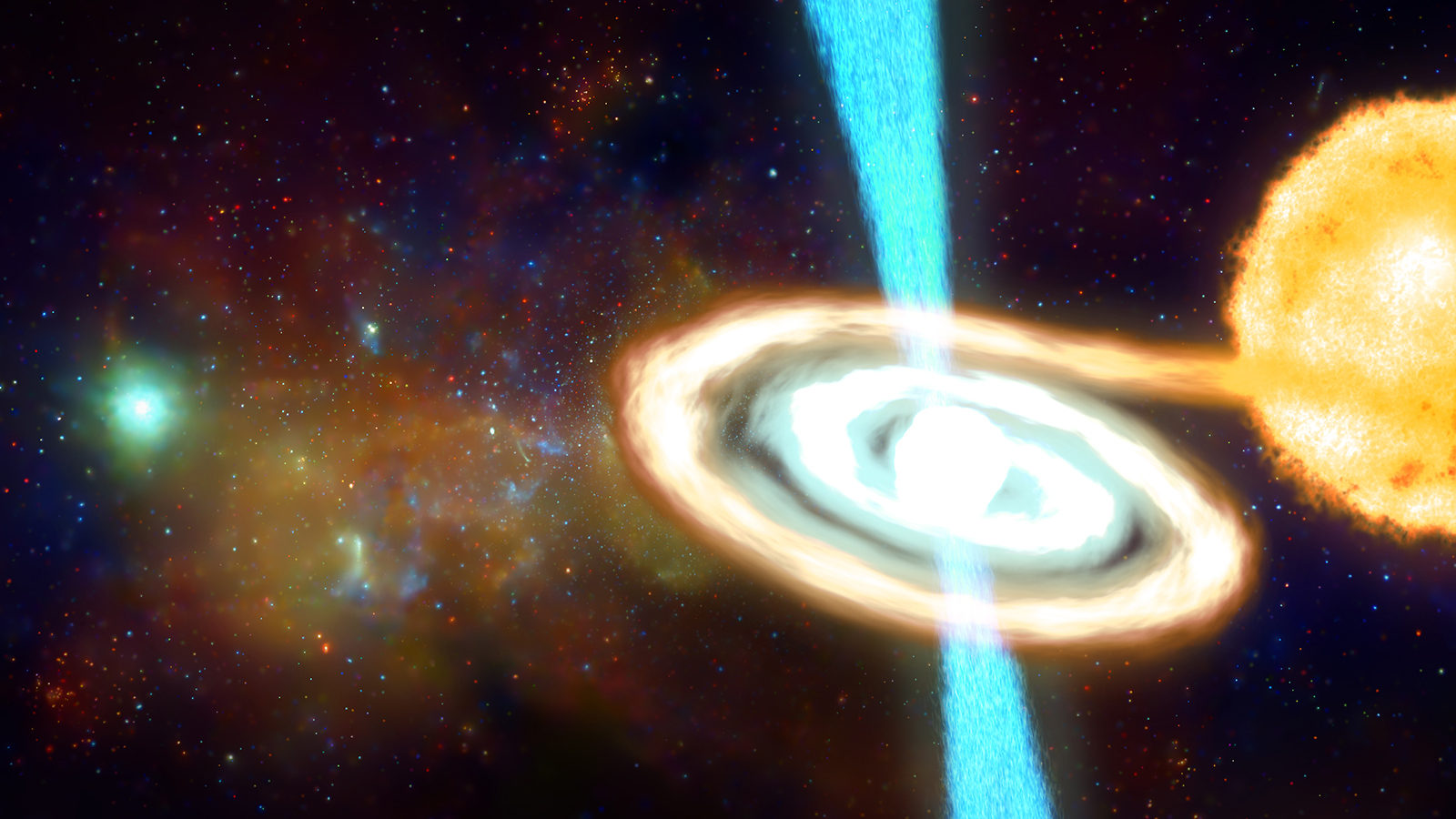 A mysterious gamma-ray glow at the center of the Milky Way is most likely caused by pulsars, the incredibly dense, rapidly spinning cores of collapsed ancient stars that were up to 30 times more massive than the sun.

That’s the conclusion of a new analysis by an international team of astrophysicists on the Fermi LAT collaboration. The findings cast doubt on previous interpretations of the signal as a potential sign of dark matter, a form of matter that accounts for 85 percent of all matter in the universe but that so far has evaded detection.

“Our study shows that we don’t need dark matter to understand the gamma-ray emissions of our galaxy,” says Mattia Di Mauro from the Kavli Institute for Particle Astrophysics and Cosmology, a joint institute of Stanford University and the US Department of Energy's SLAC National Accelerator Laboratory. “Instead, we have identified a population of pulsars in the region around the galactic center, which sheds new light on the formation history of the Milky Way.”

Di Mauro led the analysis, which looked at the glow with the Large Area Telescope on NASA’s Fermi Gamma-ray Space Telescope, which has been orbiting Earth since 2008. The LAT, a sensitive “eye” for gamma rays, the most energetic form of light, was conceived of and assembled at SLAC, which also hosts its operations center.

The collaboration’s findings, submitted to The Astrophysical Journal for publication, are available as a preprint.

Dark matter is one of the biggest mysteries of modern physics. Researchers know that dark matter exists because it bends light from distant galaxies and affects how galaxies rotate. But they don’t know what the substance is made of. Most scientists believe it’s composed of yet-to-be-discovered particles that almost never interact with regular matter other than through gravity, making it very hard to detect them.

One way scientific instruments might catch a glimpse of dark matter particles is when the particles either decay or collide and destroy each other. “Widely studied theories predict that these processes would produce gamma rays,” says Seth Digel, head of KIPAC’s Fermi group. “We search for this radiation with the LAT in regions of the universe that are rich in dark matter, such as the center of our galaxy.”

Previous studies have indeed shown that there are more gamma rays coming from the galactic center than expected, fueling some scientific papers and media reports that suggest the signal might hint at long-sought dark matter particles. However, gamma rays are produced in a number of other cosmic processes, which must be ruled out before any conclusion about dark matter can be drawn. This is particularly challenging because the galactic center is extremely complex, and astrophysicists don’t know all the details of what’s going on in that region.

Most of the Milky Way’s gamma rays originate in gas between the stars that is lit up by cosmic rays, charged particles produced in powerful star explosions called supernovae. This creates a diffuse gamma-ray glow that extends throughout the galaxy. Gamma rays are also produced by supernova remnants, pulsars—collapsed stars that emit “beams” of gamma rays like cosmic lighthouses—and more exotic objects that appear as points of light.

“Two recent studies by teams in the US and the Netherlands have shown that the gamma-ray excess at the galactic center is speckled, not smooth as we would expect for a dark matter signal,” says KIPAC’s Eric Charles, who contributed to the new analysis. “Those results suggest the speckles may be due to point sources that we can’t see as individual sources with the LAT because the density of gamma-ray sources is very high and the diffuse glow is brightest at the galactic center.”

The new study takes the earlier analyses to the next level, demonstrating that the speckled gamma-ray signal is consistent with pulsars.

“Considering that about 70 percent of all point sources in the Milky Way are pulsars, they were the most likely candidates,” Di Mauro says. “But we used one of their physical properties to come to our conclusion. Pulsars have very distinct spectra—that is, their emissions vary in a specific way with the energy of the gamma rays they emit. Using the shape of these spectra, we were able to model the glow of the galactic center correctly with a population of about 1,000 pulsars and without introducing processes that involve dark matter particles.”

The team is now planning follow-up studies with radio telescopes to determine whether the identified sources are emitting their light as a series of brief light pulses—the trademark that gives pulsars their name.

Discoveries in the halo of stars around the center of the galaxy, the oldest part of the Milky Way, also reveal details about the evolution of our galactic home, just as ancient remains teach archaeologists about human history.

“Isolated pulsars have a typical lifetime of 10 million years, which is much shorter than the age of the oldest stars near the galactic center,” Charles says. “The fact that we can still see gamma rays from the identified pulsar population today suggests that the pulsars are in binary systems with companion stars, from which they leach energy. This extends the life of the pulsars tremendously.”

The new results add to other data that are challenging the interpretation of the gamma-ray excess as a dark matter signal.

“If the signal were due to dark matter, we would expect to see it also at the centers of other galaxies,” Digel says. “The signal should be particularly clear in dwarf galaxies orbiting the Milky Way. These galaxies have very few stars, typically don’t have pulsars and are held together because they have a lot of dark matter. However, we don’t see any significant gamma-ray emissions from them.”

The researchers believe that a recently discovered strong gamma-ray glow at the center of the Andromeda galaxy, the major galaxy closest to the Milky Way, may also be caused by pulsars rather than dark matter.

But the last word may not have been spoken. Although the Fermi-LAT team studied a large area of 40 degrees by 40 degrees around the Milky Way’s galactic center (the diameter of the full moon is about half a degree), the extremely high density of sources in the innermost four degrees makes it very difficult to see individual ones and rule out a smooth, dark matter-like gamma-ray distribution, leaving limited room for dark matter signals to hide.

This work was funded by NASA and the DOE Office of Science, as well as agencies and institutes in France, Italy, Japan and Sweden.

Editor's note: A version of this article was originally published by SLAC National Accelerator Laboratory.