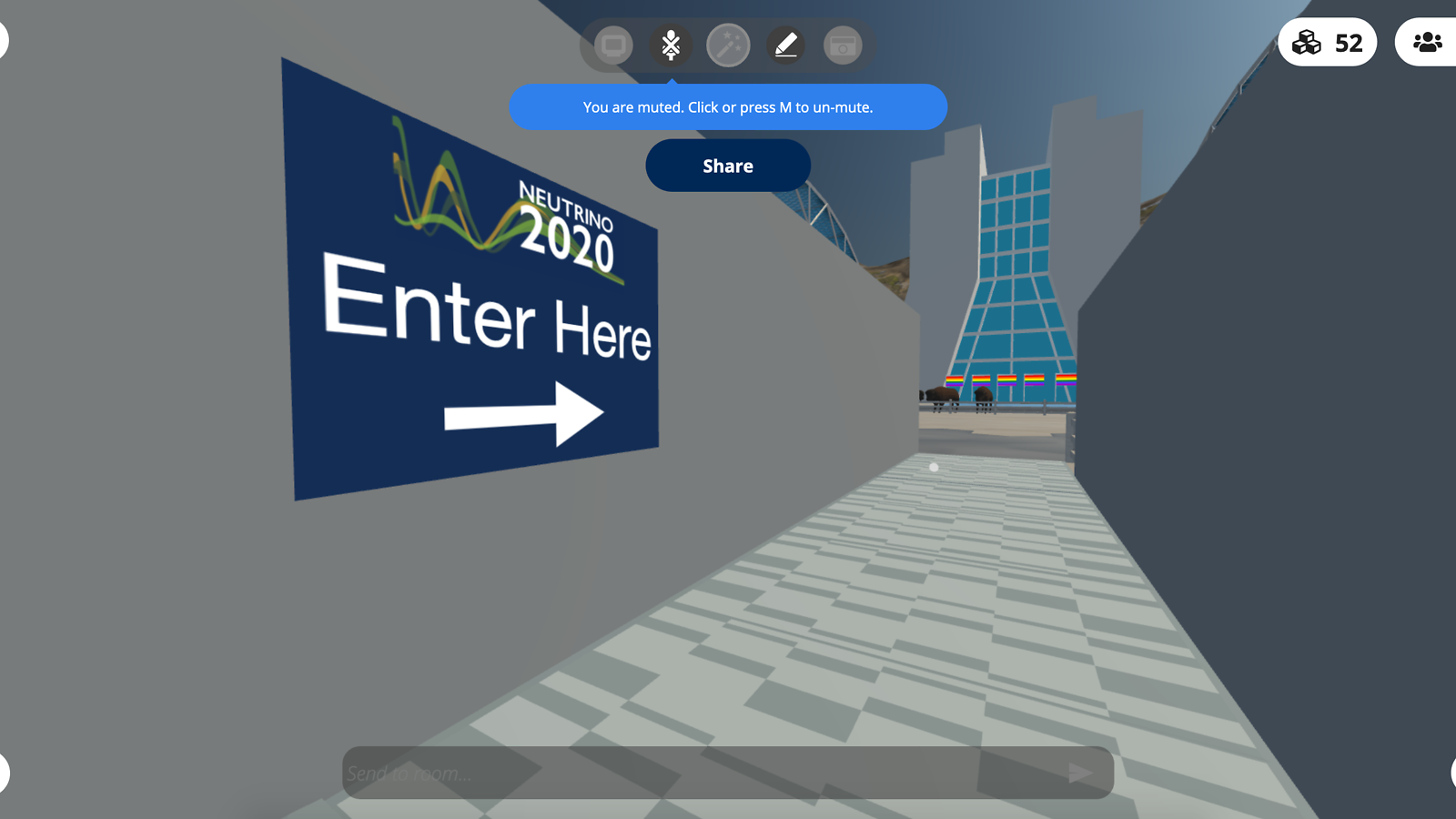 Physics poster sessions: a heady mix of science, networking and robots. That last one isn’t so common at in-person science conferences, but it was a regular sight at the recently concluded Neutrino 2020 conference, where virtual reality poster sessions hosted thousands of robotic avatars belonging to particle physicists from around the world. While most walked through the virtual world as a robot in vaguely human clothing, others donned panda suits, uploaded custom skins with gigantic human heads or particle tracks or—in one case—turned themselves into a jar of Jif peanut butter.

“It’s both more weird and more fun than I expected,” says Diana Parno, a physicist at Carnegie Mellon University who presented in one of the virtual poster sessions. “And one of the nice things about poster sessions is meeting with new people and colleagues, and making introductions—and we’ve still been able to do that.”

The 29th International Conference on Neutrino Physics is the largest gathering of neutrino scientists in the world. This year the conference was hosted jointly by the Department of Energy’s Fermilab and the University of Minnesota and, for the first time, held entirely online. The change brought many advantages to the conference. Notably, more than 3400 people from 67 countries and covering all seven continents tuned in to the 79 talks—more than four times the typical number of attendees. (Almost half of attendees were early in their career, identifying as undergraduate or graduate students.) Instead of full days of talks, half-days were spread over two weeks, allowing greater involvement from participants in different time zones. Going virtual also meant some individuals with monetary restrictions, travel restrictions, or obligations at home or work could participate. 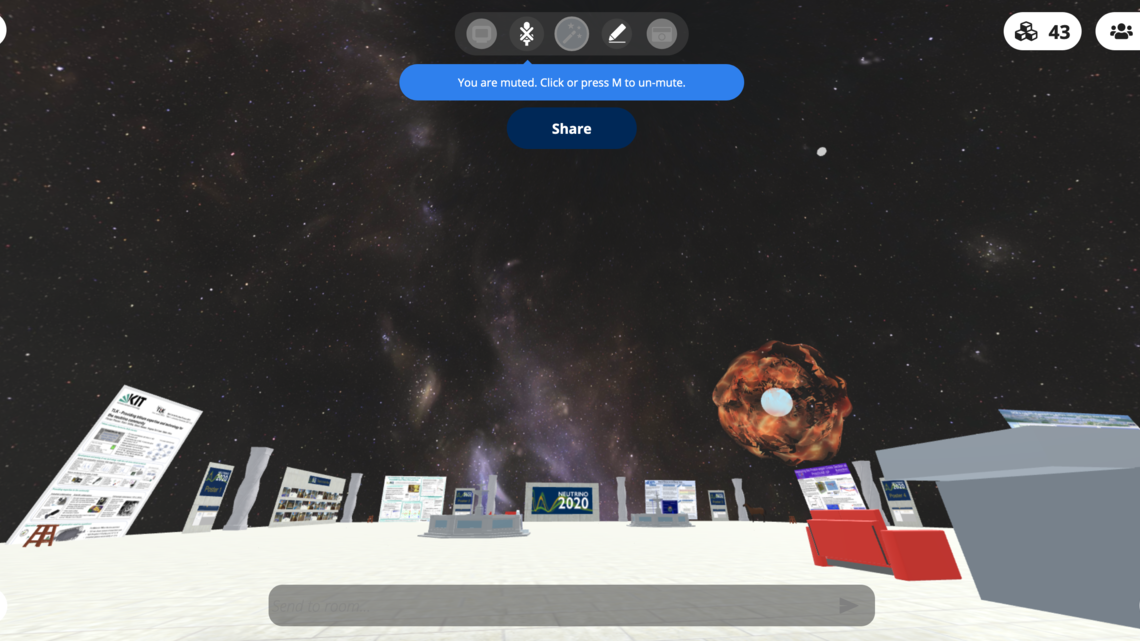 Who wants to learn more about supernova neutrinos? 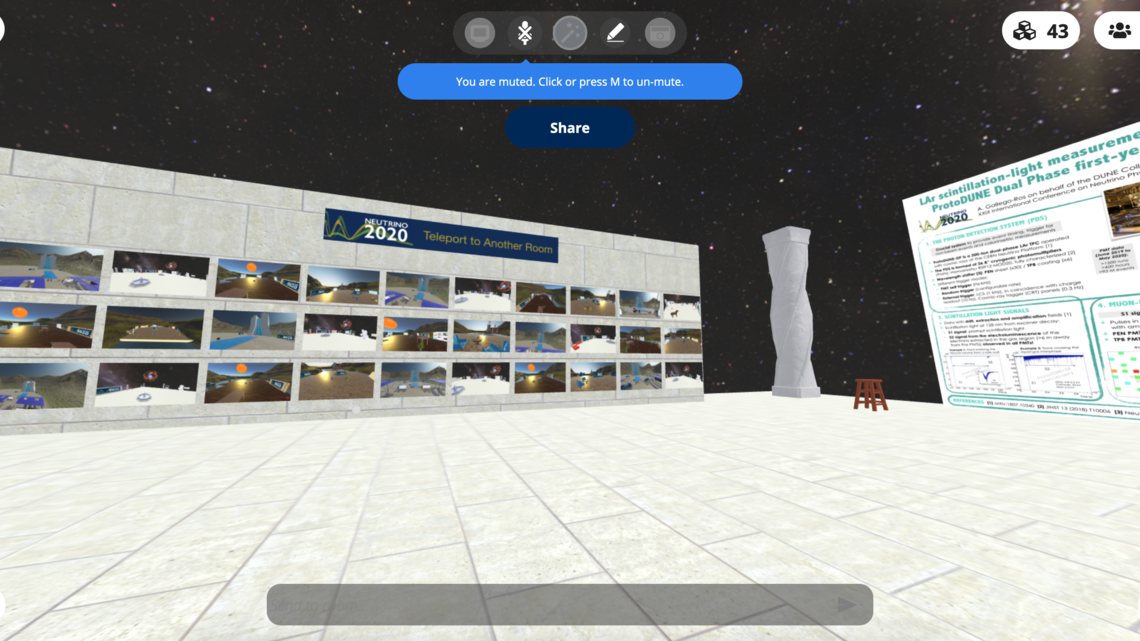 The Neutrino 2020 teleportation platform offers you many choices. What's behind screen number 16? 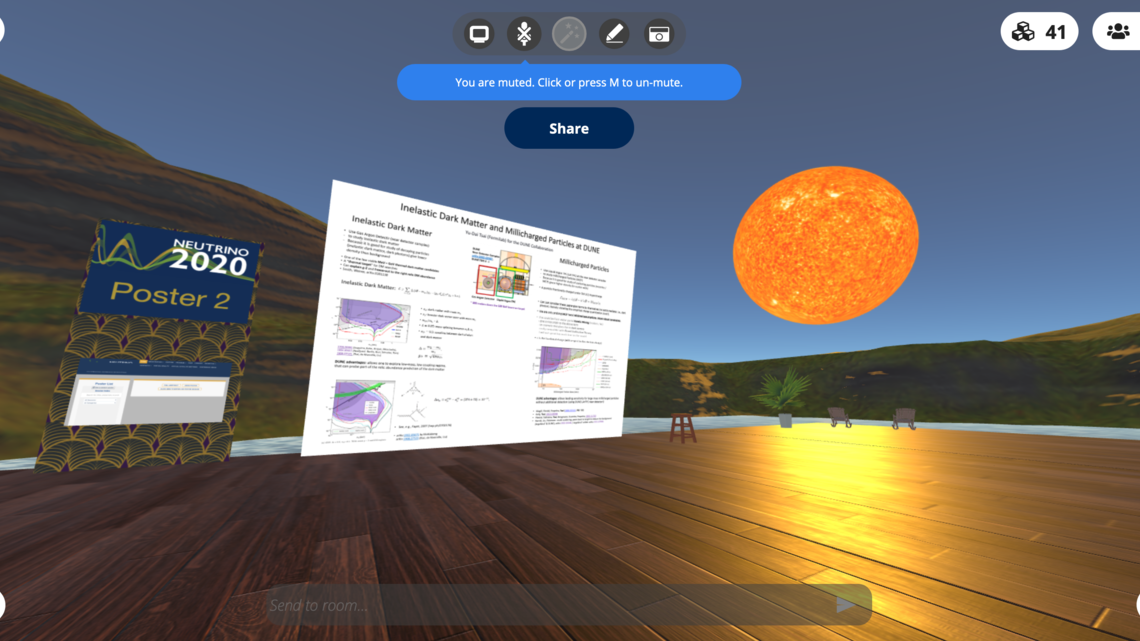 It's the solar neutrino room. 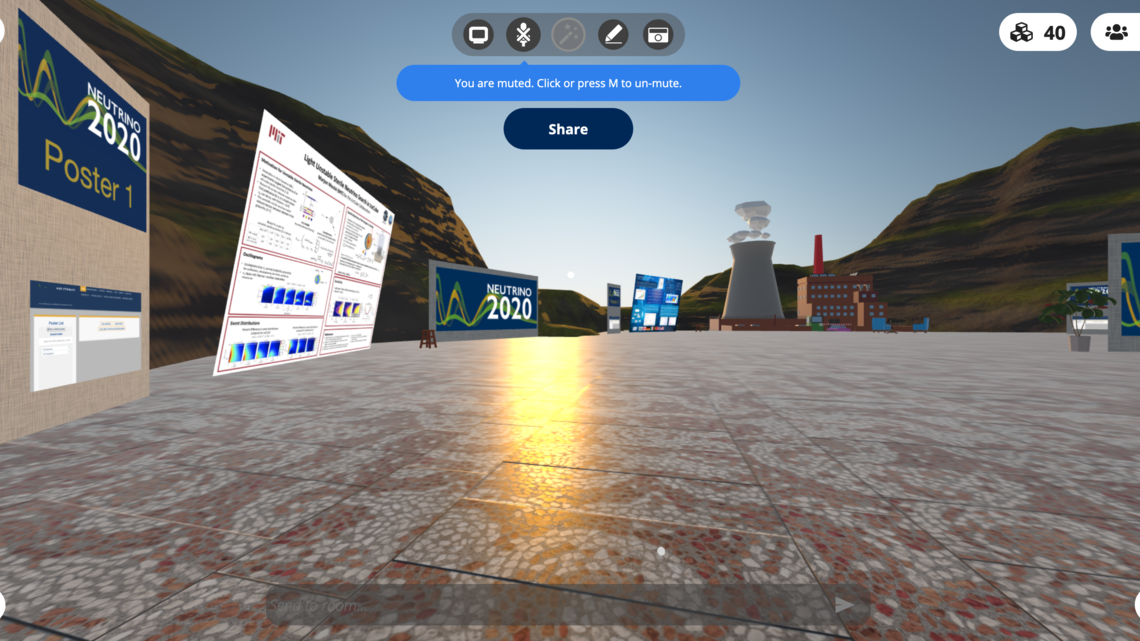 It's the reactor neutrino room. 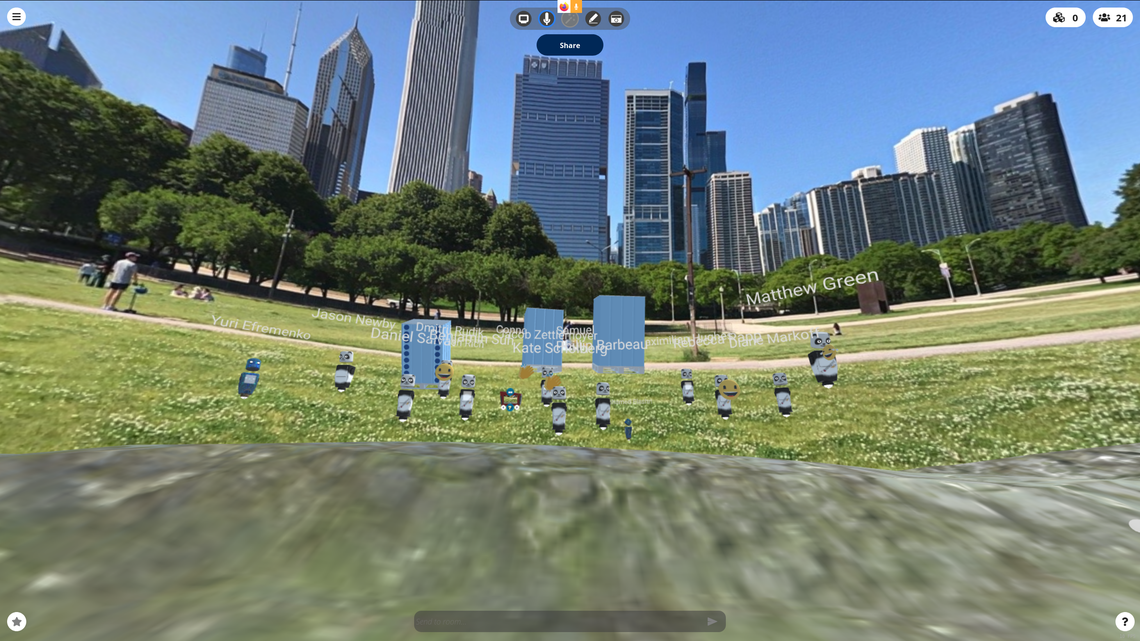 The COHERENT collaboration meets in the virtual Chicago outdoors.

Courtesy of Peter Denton
Previous Next

The decision to move online about two months before the event also brought challenges. Organizers were faced with quickly transitioning one of the most valuable parts of the conference: the networking, serendipitous interactions and other engagement that happens outside of the scheduled talks. That’s where virtual reality poster sessions came in.

“What we really wanted from this platform is a way for people to interact with others as if they were in person,” says Marco Del Tutto, a Fermilab physicist who created the virtual poster sessions using open source software from Mozilla Hubs. “It’s hard to tell if this is going to work until you try. It made me proud when I went into a poster session and saw people explaining their poster to a crowd, or walking through a room and running into people.”

Over the course of four sessions, presenters showed off 532 posters on display in 30 different virtual reality rooms. (A standard list of posters and short videos from the presenters were also available on a webpage). While in-person posters are typically set up in one concentrated area, spreading the posters across virtual rooms gave avatars more space—and reduced the amount of bandwidth to run each interactive area. It also gave Del Tutto a chance to add a neutrino twist. Four different styles of room represented four different sources of neutrinos: Fermilab’s iconic bison and Wilson Hall were the backdrop for accelerator neutrinos, a nuclear power plant represented reactor neutrinos, an enormous sun hung low in the sky for solar neutrinos and an exploding star overhead for supernova neutrinos. To complete the conference vibe, there were tables, couches and cookies scattered around.

Participants could talk in real time, their avatars’ heads rapidly bouncing around. Directional sound in headphones gave a sense of where different people were in the room and allowed users to stumble upon conversations. Walking around, one overheard all the usual topics of discussion at a physics conference—results, experimental status, careers, life updates—as well as discussion of the oddities of virtual environment—the digital bison standing nearby, how to make your avatar wear a tuxedo, the underlying technology and the inevitable glitch here or there.

“It’s clearly the kind of thing that will get better and better,” says Kate Scholberg, a neutrino physicist at Duke University and a member of the International Advisory Committee for the conference. She also gathered together about 20 members of the COHERENT collaboration for an avatar group photo in Grant Park. “It’s different, and I think it’s been really fun. I’ve been having conversations with people, and it replicates many of the in-person aspects.”

Del Tutto and the organizers also set up social rooms for researchers to hang out and chat, as well as virtual tours of Fermilab locations and spots in downtown Chicago.

“The other part of a conference is that, if it’s really in Chicago, it’s a chance to see the city with your colleagues, get to know them better and improve your working relationship with them,” Del Tutto says.

Of course, virtual reality was not the only way to interact with colleagues. Attendees also connected through chat on a dedicated Neutrino 2020 Slack account. Organizers set up channels for subsets of neutrino research (such as sterile neutrinos or long-baseline neutrinos) where attendees could drop in additional questions for the speakers and discuss ideas from the talks. There were also specific channels for topics such as the future of conferences, posters, help from the organizers, virtual reality and job opportunities. The Neutrino 2020 Slack saw more than 23,000 messages over the two-week conference.

“We had to change our plans quickly and explore creative options for making the conference as interactive as possible,” says Tanaz Mohayai, a Fermilab neutrino physicist and the webpage lead for Neutrino 2020. “It’s been wonderful to see the excitement surrounding the latest results in our field, as well as the many meaningful conversations taking place on Slack and in the poster sessions in the virtual world.”

Many attendees expect to see the virtual reality and chat features of Neutrino 2020 replicated in future online physics conferences—but it may not stop there. As conferences return to having an in-person component, there’s potential to keep the best of what works from the online world. One can envision a hybrid conference that allows for participation from around the world, virtual interactions and greater discussion through chat. And maybe, just maybe, there will be people walking around poster sessions dressed as robots—or a jar of peanut butter.

The poster portal, videos and recordings of plenary talks will continue to be available online at the Neutrino 2020 website.