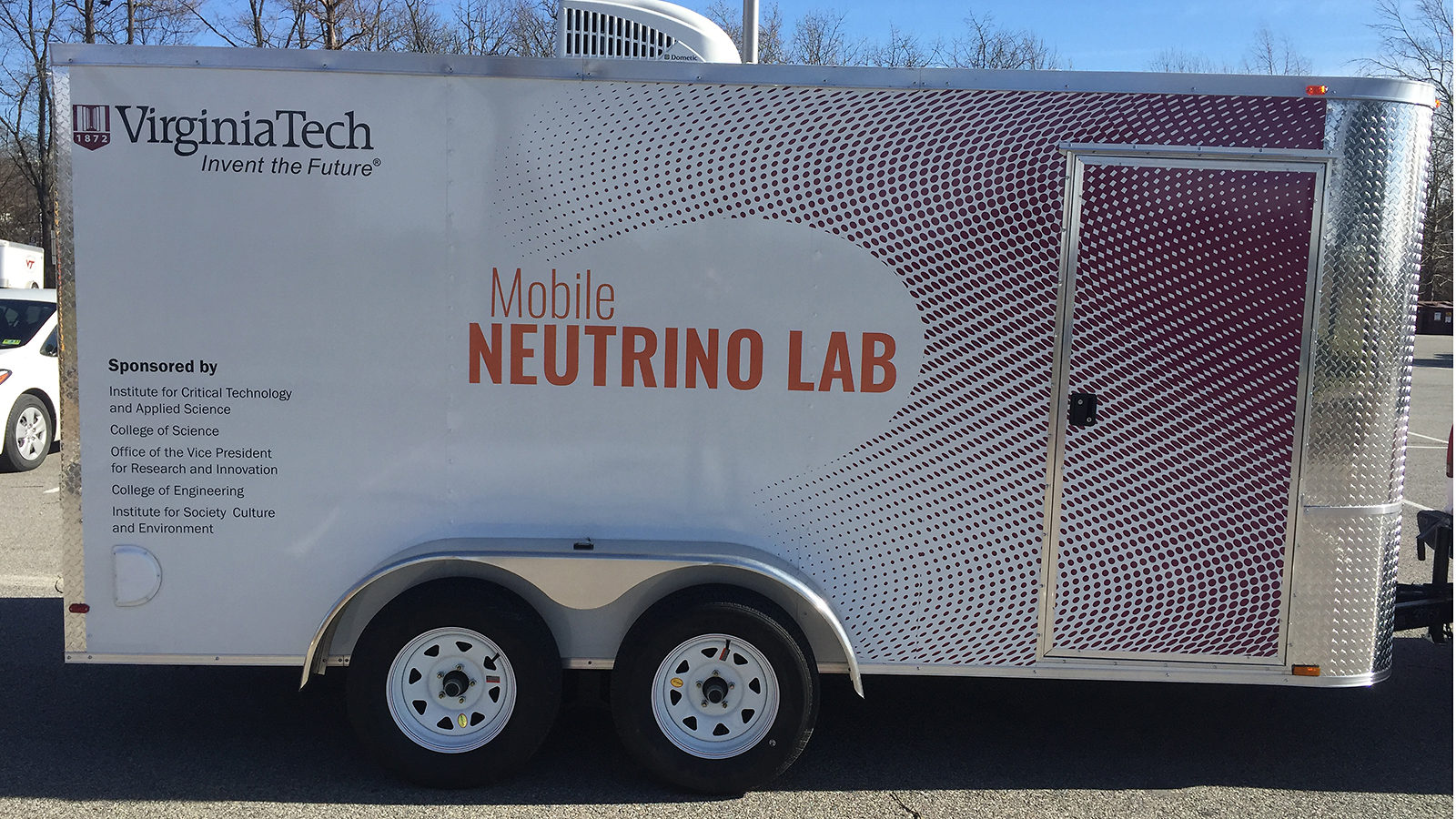 It’s not as flashy as Scooby Doo’s Mystery Machine, but scientists at Virginia Tech hope that their new vehicle will help solve mysteries about a ghost-like phenomenon: neutrinos.

The Mobile Neutrino Lab is a trailer built to contain and transport a 176-pound neutrino detector named MiniCHANDLER (Carbon Hydrogen AntiNeutrino Detector with a Lithium Enhanced Raghavan-optical-lattice). When it begins operations in mid-April, MiniCHANDLER will make history as the first mobile neutrino detector in the US.

“Our main purpose is just to see neutrinos and measure the signal to noise ratio,” says Jon Link, a member of the experiment and a professor of physics at Virginia Tech’s Center for Neutrino Physics. “We just want to prove the detector works.”

Neutrinos are fundamental particles with no electric charge, a property that makes them difficult to detect. These elusive particles have confounded scientists on several fronts for more than 60 years. MiniCHANDLER is specifically designed to detect neutrinos' antimatter counterparts, antineutrinos, produced in nuclear reactors, which are prolific sources of the tiny particles.

Fission at the core of a nuclear reactor splits uranium atoms, whose products themselves undergo a process that emits an electron and electron antineutrino. Other, larger detectors such as Daya Bay have capitalized on this abundance to measure neutrino properties.

MiniCHANDLER will serve as a prototype for future mobile neutrino experiments up to 1 ton in size.

Link and his colleagues hope MiniCHANDLER and its future counterparts will find answers to questions about sterile neutrinos, an undiscovered, theoretical kind of neutrino and a candidate for dark matter. The detector could also have applications for national security by serving as a way to keep tabs on material inside of nuclear reactors.

MiniCHANDLER echoes a similar mobile detector concept from a few years ago. In 2014, a Japanese team published results from another mobile neutrino detector, but their data did not meet the threshold for statistical significance. Detector operations were halted after all reactors in Japan were shut down for safety inspections.

“We can monitor the status from outside of the reactor buildings thanks to [a] neutrino’s strong penetration power,” Shugo Oguri, a scientist who worked on the Japanese team, wrote in an email.

Link and his colleagues believe their design is an improvement, and the hope is that MiniCHANDLER will be able to better reject background events and successfully detect neutrinos.

Neutrinos, where are you?

To detect neutrinos, which are abundant but interact very rarely with matter, physicists typically use huge structures such as Super-Kamiokande, a neutrino detector in Japan that contains 50,000 tons of ultra-pure water. Experiments are also often placed far underground to block out signals from other particles that are prevalent on Earth’s surface.

With its small size and aboveground location, MiniCHANDLER subverts both of these norms.

The detector uses solid scintillator technology, which will allow it to record about 100 antineutrino interactions per day. This interaction rate is less than the rate at large detectors, but MiniCHANDLER makes up for this with its precise tracking of antineutrinos.

Small plastic cubes pinpoint where in MiniCHANDLER an antineutrino interacts by detecting light from the interaction. However, the same kind of light signal can also come from other passing particles like cosmic rays. To distinguish between the antineutrino and the riffraff, Link and his colleagues look for multiple signals to confirm the presence of an antineutrino.

Those signs come from a process called inverse beta decay. Inverse beta decay occurs when an antineutrino collides with a proton, producing light (the first event) and also kicking a neutron out of the nucleus of the atom. These emitted neutrons are slower than the light and are picked up as a secondary signal to confirm the antineutrino interaction.

“[MiniCHANDLER] is going to sit on the surface; it's not shielded well at all. So it's going to have a lot of background,” Link says. “Inverse beta decay gives you a way of rejecting the background by identifying the two-part event.”

Scientists could find use for a mobile neutrino detector beyond studying reactor neutrinos. They could also use the detector to measure properties of the nuclear reactor itself.

A mobile neutrino detector could be used to determine whether a reactor is in use, Oguri says. “Detection unambiguously means the reactors are in operation—nobody can cheat the status.”

The detector could also be used to determine whether material from a reactor has been repurposed to produce nuclear weapons. Plutonium, an element used in the process of making weapons-grade nuclear material, produces 60 percent fewer detectable neutrinos than uranium, the primary component in a reactor core.

“We could potentially tell whether or not the reactor core has the right amount of plutonium in it,” Link says.

Using a neutrino detector would be a non-invasive way to track the material; other methods of testing nuclear reactors can be time-consuming and disruptive to the reactor’s processes.

But for now, Link just wants MiniCHANDLER to achieve a simple—yet groundbreaking—goal: Get the mobile neutrino lab running.