The results of the MicroBooNE experiment will be relevant for the forthcoming Deep Underground Neutrino Experiment. 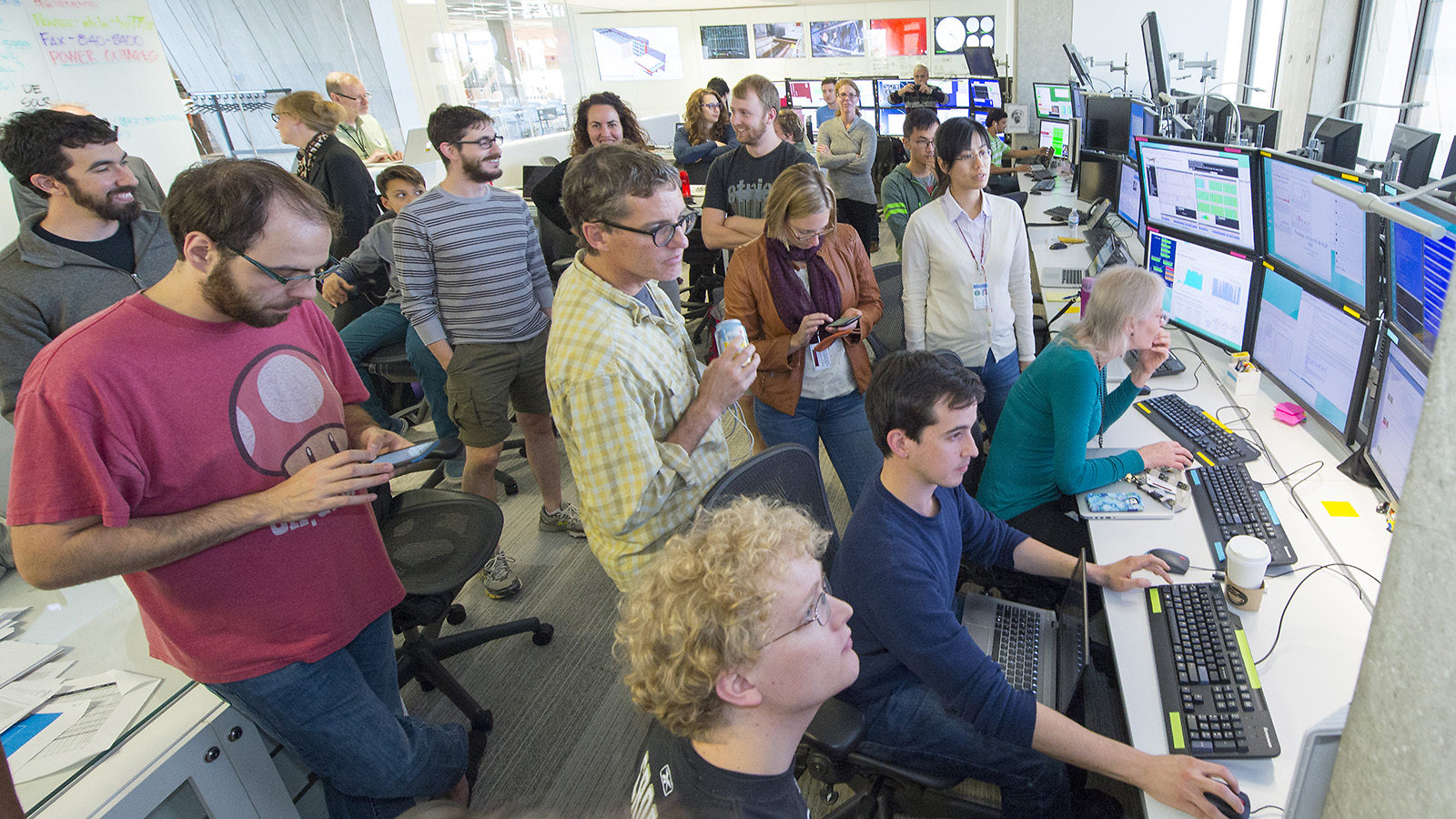 Today the MicroBooNE collaboration announced that it has seen its first neutrinos in the experiment's newly built detector.

“It's nine years since we proposed, designed, built, assembled and commissioned this experiment,” says Bonnie Fleming, MicroBooNE co-spokesperson and a professor of physics at Yale University. “That kind of investment makes seeing first neutrinos incredible.”

After months of hard work and improvements by the Fermi National Accelerator Laboratory Booster team, on October 15, the Fermilab accelerator complex began delivering protons, which are used to make neutrinos, to one of the laboratory's newest neutrino experiments, MicroBooNE. After the beam was turned on, scientists analyzed the data recorded by MicroBooNE's particle detector to find evidence of its first neutrino interactions.

“This was a big team effort,” says Anne Schukraft, a Fermilab postdoc working on MicroBooNE. “More than 100 people have been working very hard to make this happen. It's exciting to see the first neutrinos.”

MicroBooNE is funded by the U.S. Department of Energy. Its detector is a liquid-argon time projection chamber. It resembles a silo lying on its side, but instead of grain, it’s filled with 170 tons of liquid argon.

Liquid argon is 40 percent denser than water, and hence neutrinos are more likely to interact with it. When an accelerator-born neutrino hits the nucleus of an argon atom in the detector, its collision creates a spray of subatomic particle debris. Tracking these particles allows scientists to reveal the type and properties of the neutrino that produced them.

Neutrinos have recently received quite a bit of media attention. The 2015 Nobel Prize in physics was awarded for neutrino oscillations, a phenomenon that is of great importance to the field of elementary particle physics. Intense activity is under way worldwide to capture neutrinos and examine their behavior of transforming from one type into another.

MicroBooNE is an example of a new liquid-argon detector being developed to further probe this phenomenon while reconstructing the particle tracks emerging from neutrino collisions as finely detailed three-dimensional images. Its findings will be relevant for the forthcoming Deep Underground Neutrino Experiment, known as DUNE, which plans to examine neutrino transitions over longer distances and a much broader energy range. Scientists are also using MicroBooNE as an R&D platform for the large DUNE liquid-argon detectors.

“Future neutrino experiments will use this technology,” says Sam Zeller, Fermilab physicist and MicroBooNE co-spokesperson. “We're learning a lot from this detector. It's important not just for us, but for the entire neutrino community.”

In August, MicroBooNE saw its first cosmic ray events, recording the tracks of cosmic ray muons. The recent neutrino sighting brings MicroBooNE researchers much closer to one of their scientific goals, determining whether the excess of low-energy events observed in a previous Fermilab experiment was the footprint of a sterile neutrino or a new type of background.

Before they can do that, however, MicroBooNE will have to collect data for several years.

During this time, MicroBooNE will also be the first liquid-argon detector to measure neutrino interactions from a beam of such low energy. At less than 800 MeV (megaelectronvolts), this beam produces the lowest-energy neutrinos yet to be observed with a liquid-argon detector.

MicroBooNE is part of Fermilab's Short-Baseline Neutrino program, and scientists will eventually add two more detectors (ICARUS and the Short-Baseline Near Detector) to its neutrino beamline.

The MicroBooNE collaboration includes more than 150 scientists from 28 institutions in five countries. 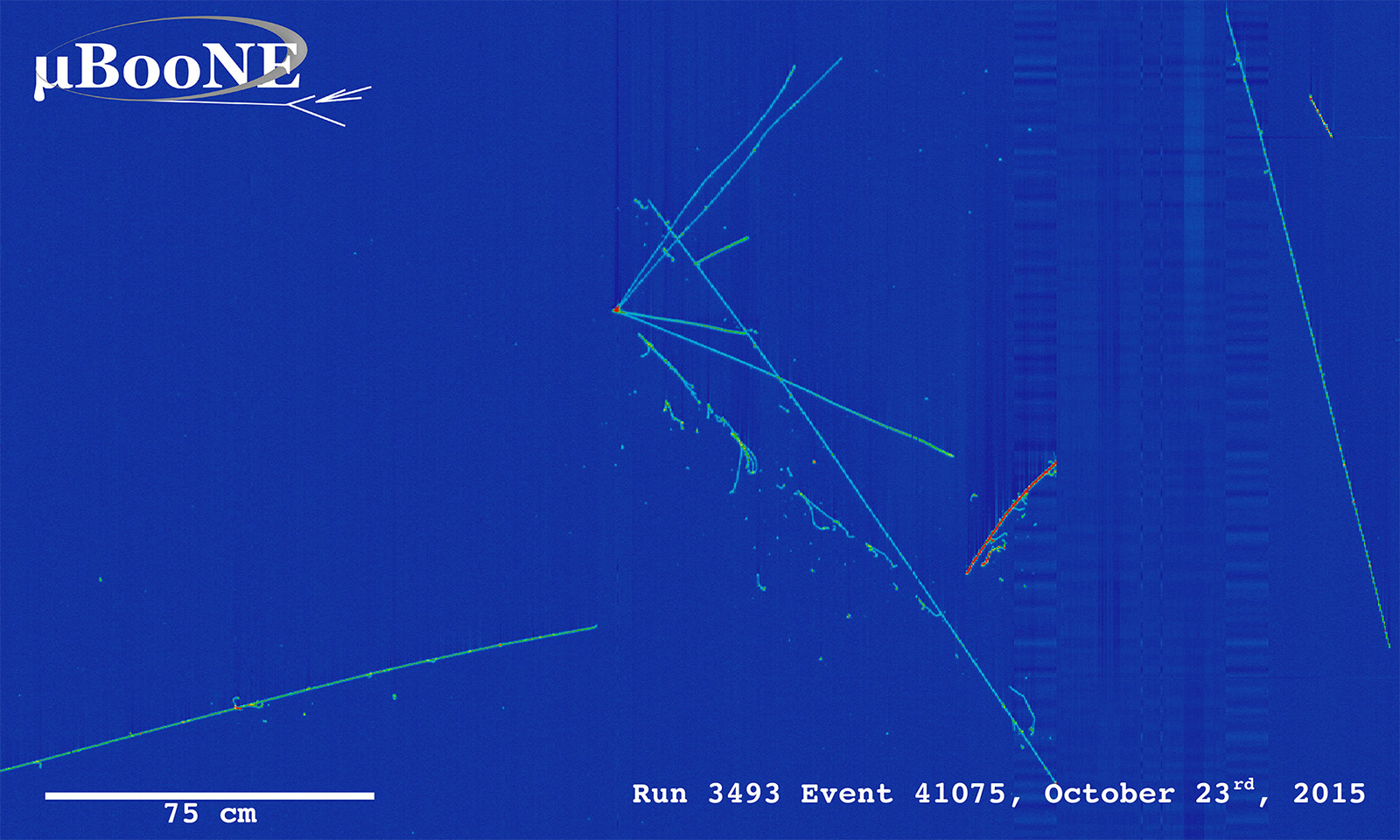 This display shows a neutrino event candidate in the MicroBooNE detector.