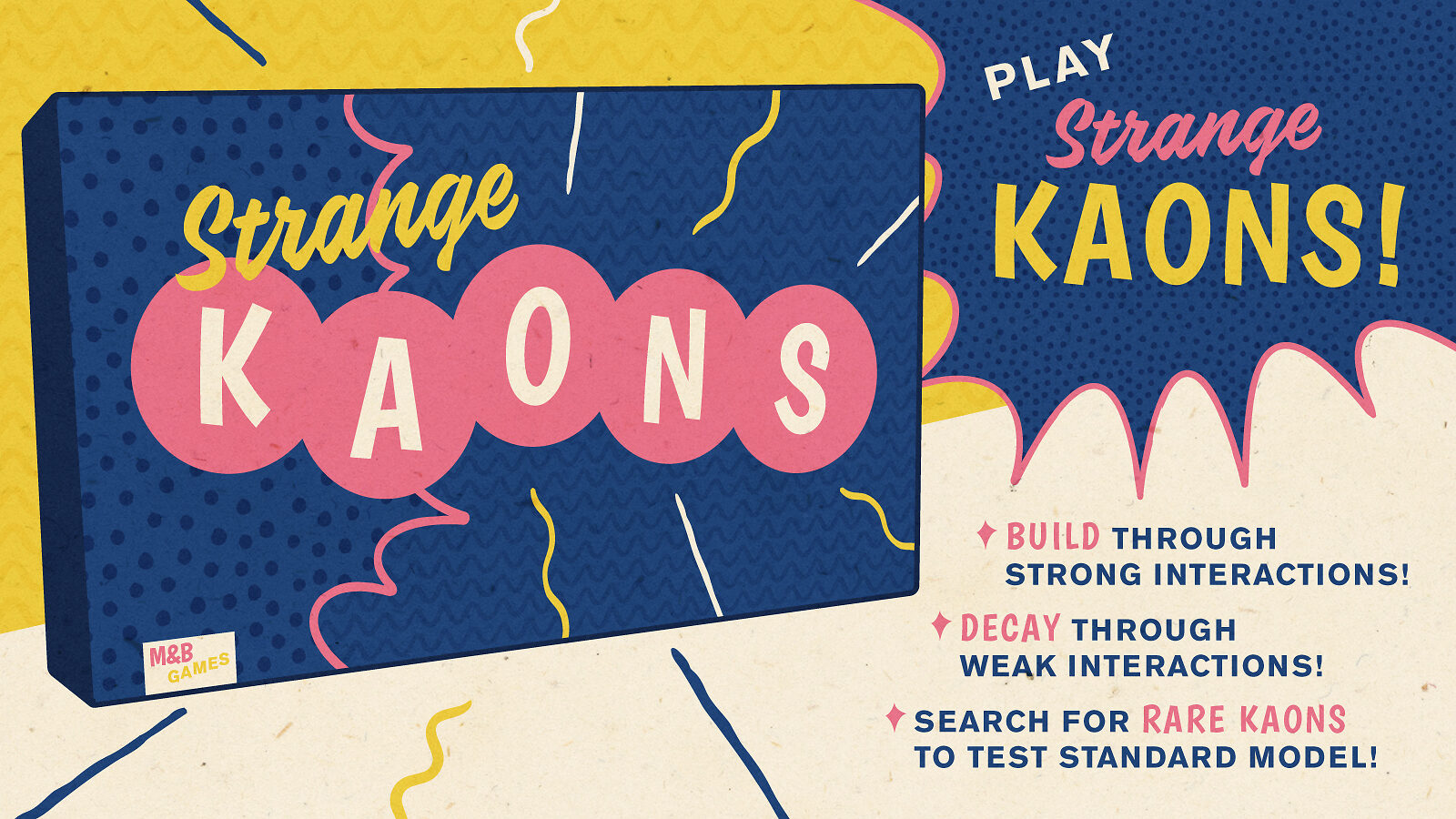 All Clifford Charles Butler and George Rochester knew for sure was that they’d discovered something new. Photographs from their cloud-chamber experiments at the University of Manchester revealed the tracks of two particles that behaved unlike anything they’d seen before.

When the two physicists published their results in 1947 in the journal Nature, they could have had only the dimmest notion that their discovery would in time upend the world’s understanding of elementary particle physics.

Observations of kaons, as the particles came to be known, and other similar particles led physicists on a path toward the discoveries of new quantum properties of matter, new particles—including quarks—and the downfall of a once-sacrosanct construct called CP symmetry, an exact relationship between the laws of physics for matter and those for antimatter. Today, high-precision experiments with kaons are helping researchers probe the limits of the same Standard Model the particles helped usher in.

But back in Butler and Rochester’s day, physicists were mostly left scratching their heads, says Helen Quinn, an emerita professor of physics and astrophysics at the US Department of Energy’s SLAC National Accelerator Laboratory.

“Kaons didn’t fit any picture” physicists had at the time, she says. In fact, when physicists realized they needed a new quantum property to describe the particles, it “was called ‘strangeness,’ because the particles had always seemed a bit strange.” 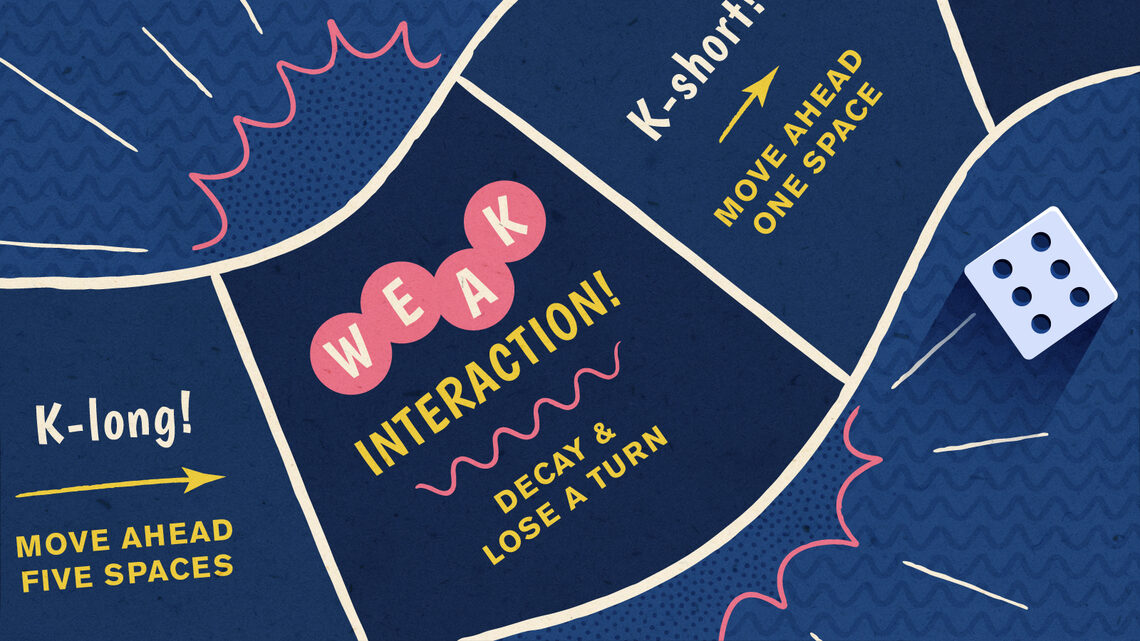 By the start of the 1940s, it seemed like physicists were getting a handle on the fundamental particles and their interactions. They knew about electrons, protons and neutrons, as well as neutrinos and even positrons, the “antiparticles” of electrons Paul Dirac had predicted in the 1920s. They understood that there were forces beyond gravity and electromagnetism, the strong and weak nuclear forces, and were working to better understand them.

But puzzles emerged as unexpected new particles appeared. Physicists discovered muons in cosmic rays using a cloud chamber experiment in 1936. (The name “cloud chamber” comes from the fact that electrically charged particles travelling through water vapor form tiny trails of clouds in their wake.) They found pions by similar means in 1947.

That same year, Butler and Rochester announced they’d found particles they called V+ and V0. From a set of “unusual fork[s]” in their data, they inferred the existence of two fairly massive particles, one positively charged and the other neutral, that had broken apart into other particles.

The particles had a number of curious features. For one thing, they were heavy—around five times the mass of a muon—which led to another puzzle. Ordinarily, heavier particles have shorter lifetimes, meaning that they stick around for less time before decaying into other, lighter particles. But as experiments continued, researchers discovered that despite their heft, the particles had relatively long lifetimes.

Another odd feature: The particles were easy to make, but physicists never seemed to be able to produce just one of them at a time. Smash a pion and a proton together, for example, and you could create the new particles, but only in pairs. At the same time, they could decay independently of each other.

Importantly, strangeness has to remain constant when particles are produced through strong nuclear forces, but not when they decay through weak nuclear forces.

That explained why strange particles always appeared in pairs—one particle’s strangeness has to be canceled out by another’s. The fact that they’re built through strong interactions but decay through weak interactions, which tend to take longer to play out, explained the relatively long decay times.

These observations led to several more fundamental insights, says Jonathan Rosner, a theoretical physicist at the University of Chicago. As Gell-Mann and colleagues developed their theory, they saw they could organize groups of particles into bunches related by strangeness and electric charge, a scheme known today as The Eightfold Way. Efforts to explain this organization led to the prediction of an underlying set of particles: quarks.

The long and short of it

Another important feature of the strangeness theory: When scientists found that strange kaons could decay into, for example, ordinary pions, they surmised that the weak nuclear interaction, unlike the strong nuclear interaction, did not need to keep strangeness constant. This observation set in motion a series of theoretical and experimental developments that physicists are still grappling with today.

The scheme has a significant consequence: It implies that there are two new particles—actually different combinations of the neutral kaon and its antiparticle—with different lifetimes. K-long, as it’s now called, lasts on average about 50 billionths of a second, while K-short lasts just under one-tenth of a billionth of a second before breaking apart. The prediction of these particles was among Gell-Mann’s favorite results, Rosner says, because of how easily they emerged out of basic quantum physics.

A symmetry of nature, dethroned

One of the important things about K-long and K-short, at least in Gell-Mann and Pais’s theory, was that they obeyed something called CP symmetry. Roughly, CP symmetry says that if one were to switch every particle with its antiparticle and flip space around into a sort of mirror-image universe, the laws of physics would remain the same. CP symmetry holds in all classical physics, and it was CP’s quantum variant that motivated Gell-Mann and Pais. (Technically, Gell-Mann and Pais were originally motivated by C symmetry alone, but they had to update their theory once experiments determined that weak interactions violated both charge conjugation and parity symmetry—but in such a way that CP itself seemed to remain a good symmetry.)

Ironically, a result motivated by CP symmetry led to its downfall: In 1964, James Cronin, Val Fitch and collaborators working at Brookhaven National Laboratory discovered that the K-long could—very rarely—break up into two pions, a reaction that violates CP symmetry. Kaon decays did violate CP symmetry after all. 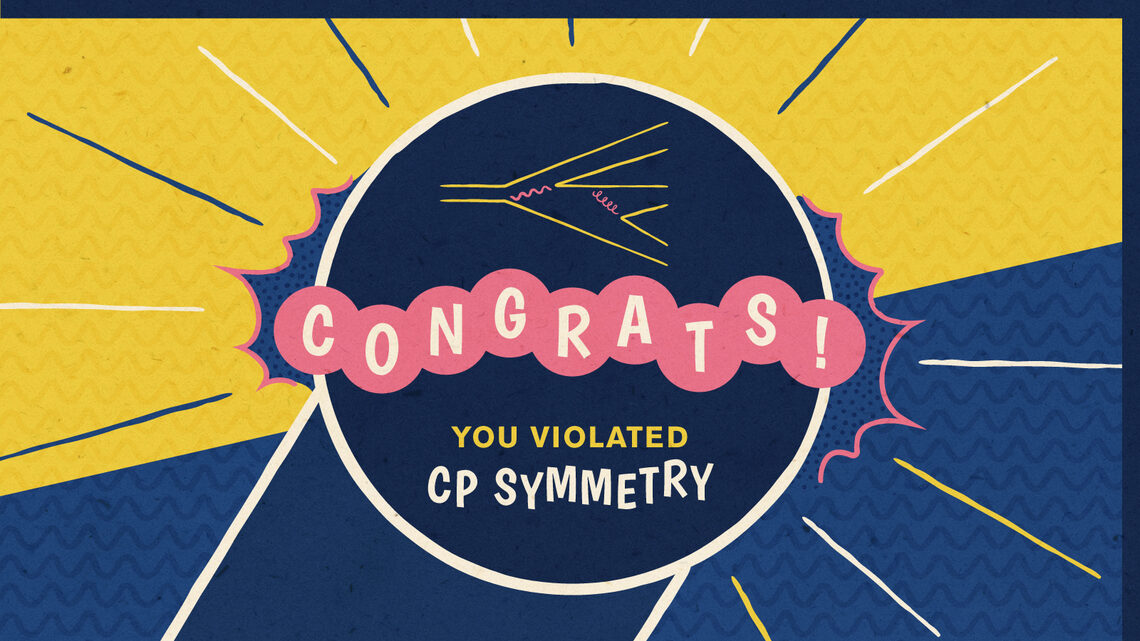 The cosmic gift that keeps on giving

By the early 1970s, Quinn says, physicists developing the Standard Model needed a way to incorporate CP violation. In 1973 Makoto Kobayashi and Toshihide Maskawa, building on work by Nicola Cabibbo, proposed the solution: The Standard Model needed an extra pair of quarks beyond what they had already theorized. They also predicted that certain quarks could decay through weak interactions into other quarks in ways that violate CP symmetry. Throughout the 1980s and ’90s, kaon experiments such as KTeV at Fermilab and NA48 at CERN—along with B-meson experiments such as BaBar at SLAC and Belle at KEK—probed how such interactions led to CP violation.

Over the years, theorists had also made ever more precise predictions about the various ways kaons could break apart. So precise are these predictions, says Yau Wah, a physicist at the University of Chicago, that searching for rare kaon decays remains among the best ways to test the Standard Model.

“The merit of [these tests] is because the Standard Model is too successful,” says Wah, who works on the K0TO experiment, a Japanese project to search for neutral kaons decaying into a pion, neutrino and antineutrino.

In the next five years, Wah says, K0TO will likely be in a position to say whether the Standard Model’s tight predictions related to that decay are correct. If not, it could indicate new sources of CP violation beyond the Standard Model.

Such studies are also a good way to probe physics at extremely high energy scales, since any deviations from current predictions would require new particles with enormous masses—perhaps a million times that of the proton, says Cristina Lazzeroni, a physicist at CERN’s NA62 experiment, which focuses on rare decays of charged kaons.

Lazzeroni says NA62 has already found some evidence of positively charged kaons decaying into positively charged pions and two neutrinos, and that in the next five years they plan to probe Standard Model physics to a level of accuracy that will allow them to see whether there is new physics to be found. What started in a simple cloud chamber three-quarters of a century ago is continuing in some of the most precise experiments ever done, and kaons are likely to keep on giving for years to come.