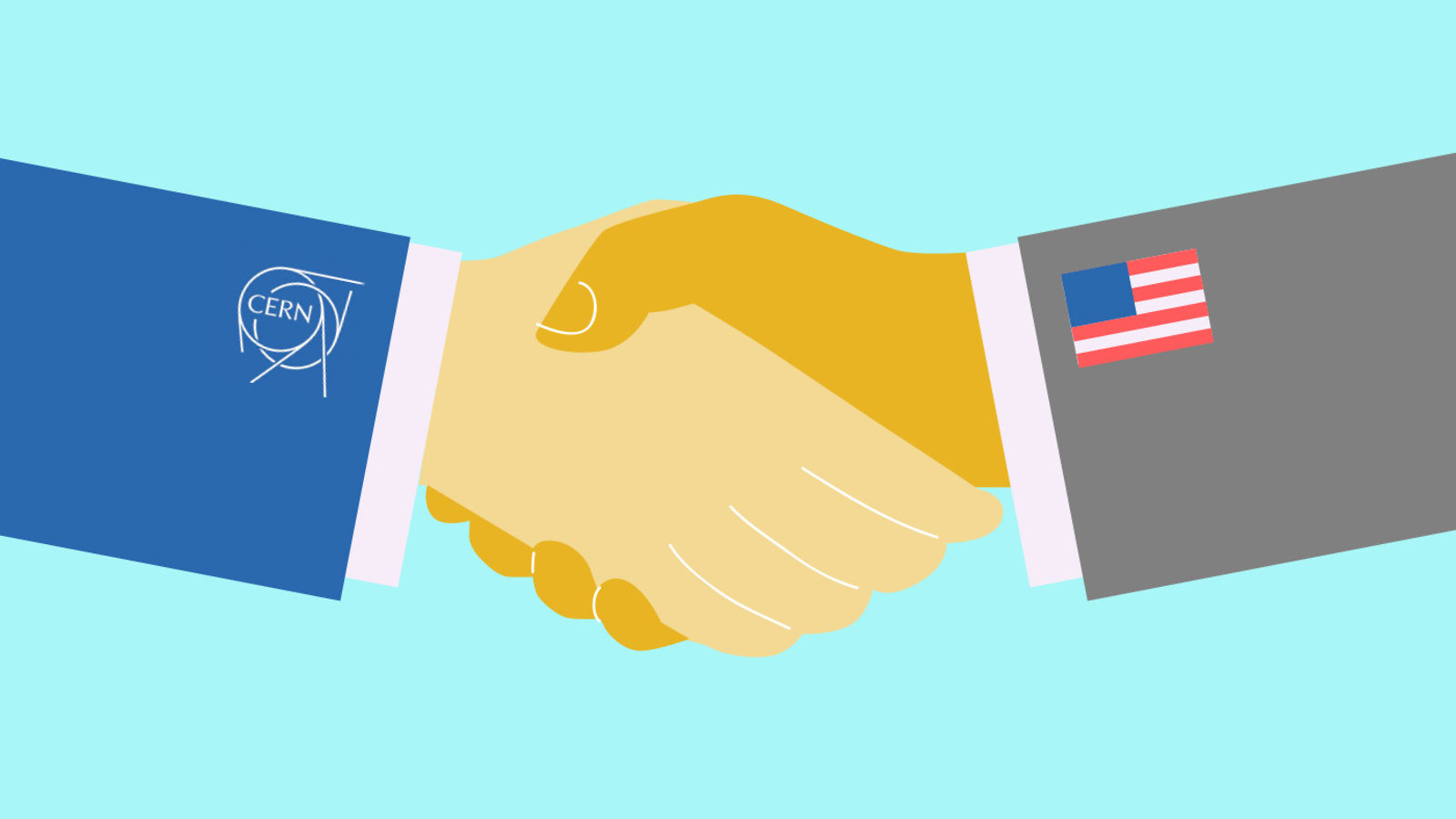 Today in a White House ceremony in Washington, DC, representatives from the US Department of Energy, the US National Science Foundation and the European research center CERN signed a cooperation agreement that lays the groundwork for continued joint research in particle physics and advanced computing both at CERN and in the United States.

The agreement succeeds an existing US-CERN agreement, signed in 1997 and set to expire in 2017, that was the basis for significant US participation in research at the Large Hadron Collider. The new agreement aligns the United States’ and CERN’s long-term strategies for particle physics and provides for “reciprocity,” opening the way for potential CERN participation in US-hosted experiments, including prospective projects focused on neutrinos.

“Today’s agreement not only enables US scientists to continue their vital contribution to the important work at CERN, but it also opens the way to CERN’s participation in experiments hosted in the United States,” says Energy Secretary Ernest Moniz in a press release. “As we’ve seen, international collaboration between the United States and CERN helps provide a foundation for groundbreaking discoveries that push crucial scientific frontiers and expand our understanding of the universe.”

The signing of the new agreement sets the stage for a new level of cooperation. CERN already has established a test facility that is being used to refurbish the 760-ton ICARUS neutrino detector before it is shipped to DOE’s Fermi National Accelerator Laboratory for use in a suite of experiments to search for a new type of neutrino. At the same time, more than 1700 scientists from US institutions are working on the next phase of the LHC experiments.

“I am delighted to sign this agreement,” says CERN Director General Rolf Heuer in the press release. “It allows us to look forward to a fruitful long-term collaboration with the United States, in particular in guiding the Large Hadron Collider to its full potential over many years through a series of planned upgrades. This agreement is also historic since it formalizes CERN’s participation in US-based programs such as prospective future neutrino facilities for the first time.”

Europe and the United States have a rich history of collaboration in particle physics research. In 1954, American physicist Isidor Rabi served as one of the founding members of CERN. Seven years later, Austrian-American physicist Victor Weisskopf became CERN’s director general. On the other side of the Atlantic, physicist Maurice Goldhaber, who received his PhD in England, became director of DOE’s Brookhaven National Laboratory in 1961, and European-born scientists, such as Carlo Rubbia, played significant roles in shaping the experimental program at Fermilab.

Scientists from European institutions have made major contributions toward planning and advancing experiments at Fermilab, SLAC and other DOE national laboratories. In the last two decades, they accounted for up to 50 percent of the researchers working on the Tevatron and BaBar experiments in the US, which led to the discovery of the top quark and the observation of quark mixing in greater detail than ever before. Simultaneously, US scientists played significant roles in the four experiments at CERN’s Large Electron-Positron collider. MIT physicist and Nobel Laureate Sam Ting, for example, led LEP’s L3 experiment.

In the 1990s, CERN invented the technology that would become the World Wide Web, revolutionizing the way in which people share information and do business. European research institutions and three US laboratories—SLAC, Fermilab and MIT—were the first ones to operate Web servers and publish webpages.

Today, the American and European physics communities remain closely intertwined. Scientists and engineers from US institutions are heavily involved in LHC research, representing 20 percent of the ATLAS collaboration and 33 percent of the CMS collaboration. US scientists hold key leadership positions within the several-thousand-physicist collaborations, and they lead many of the physics analyses that study the properties of the Higgs boson and look for hints of new physics. UCSB physicist Joe Incandela, who was the spokesperson of the CMS experiment from 2012 to 2014, presented the collaboration’s results at the press conference that announced the discovery of the Higgs boson.

US institutions also built vital parts of the LHC accelerator, including the focusing magnets that concentrate the high-energy particles into hair-thin beams as they enter the experimental halls and some of the cryogenic systems that keep the superconducting magnets at a frigid 1.7 Kelvin. And US institutions provide approximately a third of the computing power necessary to analyze the LHC data.

“CERN is a place for explorers, in the truest sense of the word,” says NSF Director France A. Córdova in the press release. “The discoveries enabled by this world-class laboratory—insights into the Standard Model, into the fundamental nature of our universe—have yielded answers to some questions and produced new questions.”

Fabiola Gianotti, who will become the director general of CERN in 2016, served on the US Particle Physics Project Prioritization Panel, which in May 2014 outlined the plan for US particle physics research for the next decade. The panel’s top recommendations included the United States’ continued participation in LHC research and upgrades, as well as the establishment of an international, world-class neutrino research facility at Fermilab, culminating in the construction of the Deep Underground Neutrino Experiment. CERN is taking steps to coordinate and support European scientists’ participation in the US-based neutrino research program.

The new agreement between CERN and the US has an initial five-year duration and, unless a change or termination is set in motion, will renew automatically every five years. It will enable American and European scientists to continue to develop technologies, build experiments and seek answers to questions such as: What is dark matter? Why do particles have mass? Are there more Higgs particles? Are neutrinos the key to the dominance of matter over antimatter in our universe?

“Society and the global research community benefit greatly from productive scientific cooperation across borders,” says John P. Holdren, director of the White House Office of Science and Technology Policy, in the press release. “Today’s agreement is a model for the kinds of international scientific collaboration that can enable breakthrough insights and innovations in areas of mutual interest.”