There’s more than gold in the Black Hills of South Dakota. For longer than five decades, the Homestake mine has hosted scientists searching for particles impossible to detect on Earth’s surface.

It all began with the Davis Cavern.

In the early 1960s, Ray Davis, a nuclear chemist at Brookhaven National Laboratory designed an experiment to detect particles produced in fusion reactions in the sun. The experiment would earn him a share of the Nobel Prize in Physics in 2002.

Davis was searching for neutrinos, fundamental particles that had been discovered only a few years before. Neutrinos are very difficult to detect; they can pass through the entire Earth without bumping into another particle. But they are constantly streaming through us. So, with a big enough detector, Davis knew he could catch at least a few.

Davis’ experiment had to be done deep underground; without the shielding of layers of rock and earth it would be flooded by the shower of cosmic rays also constantly raining from space.

Davis put his first small prototype detector in a limestone mine near Akron, Ohio. But it was only about half a mile underground, not deep enough.

“The only reason for mining deep into the earth was for something valuable like gold,” says Kenneth Lande, professor of physics at the University of Pennsylvania, who worked on the experiment with Davis. “And so a gold mine became the obvious place to look.”

But there was no precedent for hosting a particle physics experiment in such a place. “There was no case where a physics group would appear at a working mine and say, ‘Can we move in please?’”

Davis approached the Homestake Mining Company anyway, and the company agreed to excavate a cavern for the experiment.

BNL funded the experiment. In 1965, it was installed in a cavern 4850 feet below the surface.

The detector consisted of a 100,000-gallon tank of chlorine atoms. Davis had predicted that as solar neutrinos passed through the tank, one would occasionally collide with a chlorine atom, changing it to an argon atom. After letting the detector run for a couple of months at a time, Davis’ team would flush out the tank and count the argon atoms to determine how many neutrino interactions had occurred.

“The detector had approximately 1031 atoms in it. One argon atom was produced every two days,” Lande says. “To design something that could do that kind of extraction was mind-boggling.” 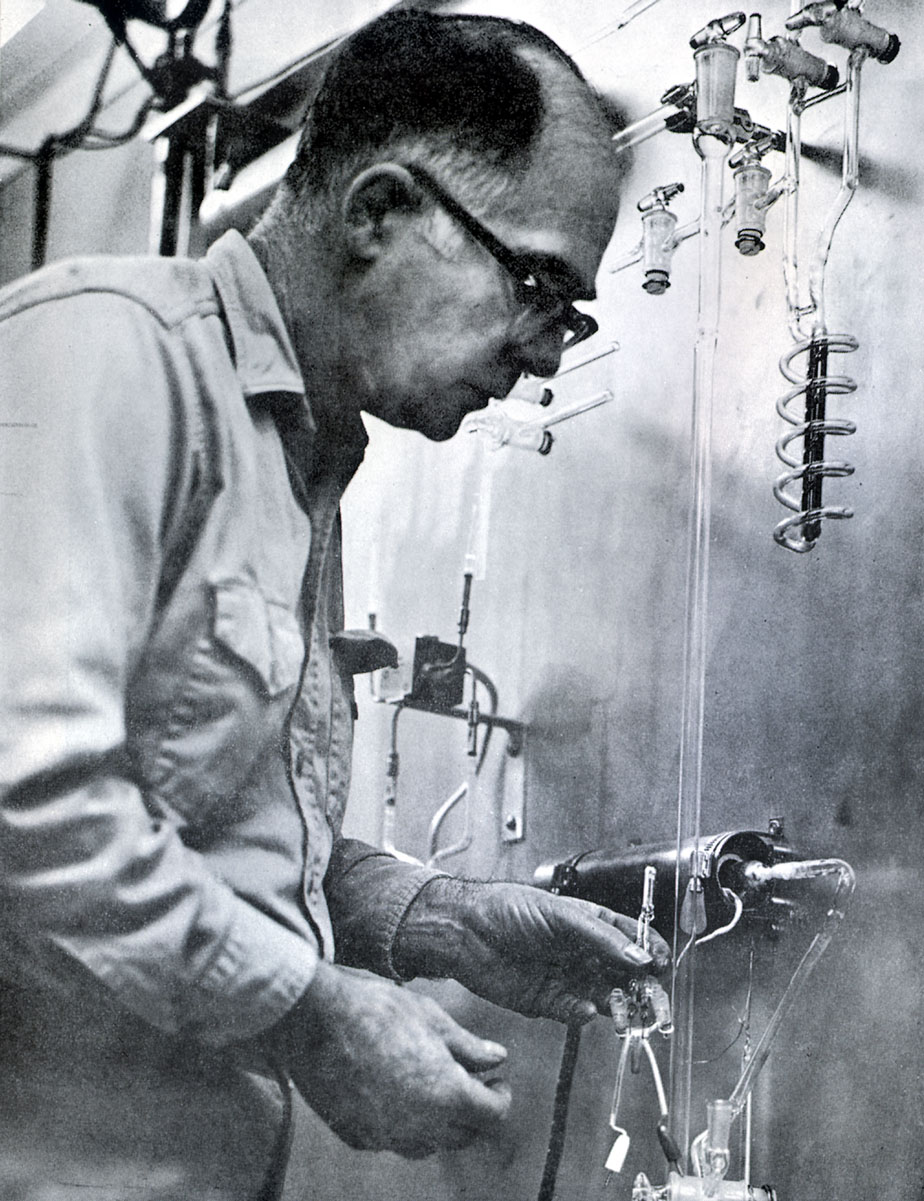 A different kind of laboratory

To go down the shaft to the 4850-foot level, they would get into what was called the “cage,” a 4.4-foot by 12.5-foot metal conveyance that held 36 people. The ride down, lit only by the glow of a couple of headlamps, took about five minutes, says Tom Regan, former operations safety manager and now safety consultant, who worked as a student laborer in the mine during the early years of the Davis experiment.

Once they reached the 4850-foot level, the scientists walked across a rock dump. “It was guarded so a person couldn’t fall down the hole,” Regan says. “But you had to sometimes wait for a production train of rock or even loads of supplies or men or materials.”

The Davis Cavern was 24 feet long, 24 feet wide, and 30 feet high. A small room off to the side held the group’s control system. “We were basically out of touch with the rest of the world when we were underground,” Lande says. “There was no difference between day and night, heat and cold, and snow and sunshine.”

The miners and locals from Lead, South Dakota—the community surrounding the mine—were welcoming of the scientists and interested in their work, Lande says. “We’d go out to dinner at the local restaurant and we’d hear this hot conversation in the next booth, and they would be discussing black holes and neutron stars. So science became the talk of the small town.” 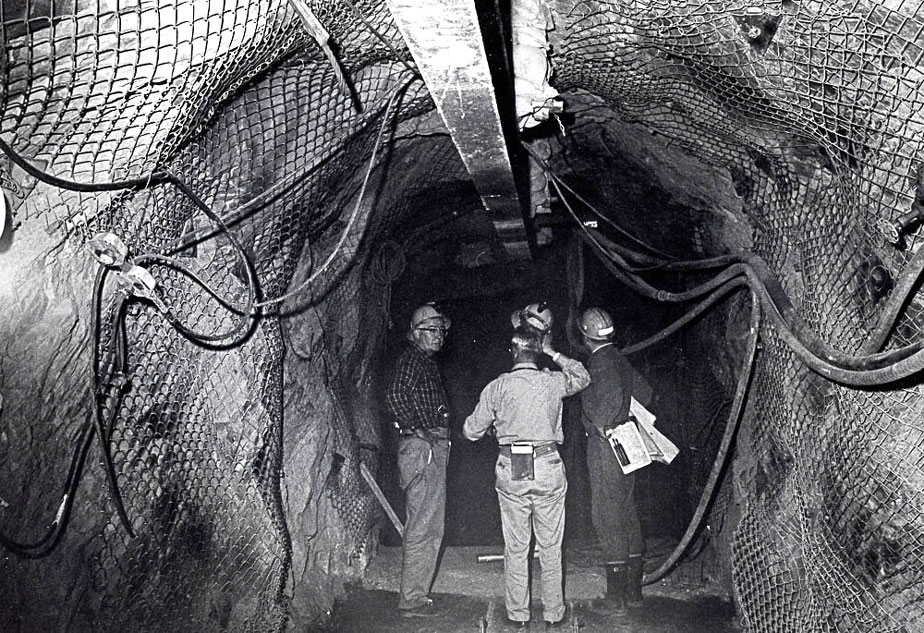 As the experiment began taking data, Davis’ group found they were detecting only about one-third the number of neutrinos predicted—a discrepancy that became known as the “solar neutrino problem.”

Davis described the situation in his Nobel Prize biographical sketch: “My opinion in the early years was that something was wrong with the standard solar model; many physicists thought there was something wrong with my experiment.”

However, every test of the experiment confirmed the results, and no problems were found with the model of the sun. Davis’ group began to suspect it was instead a problem with the neutrinos.

This suspicion was confirmed in 2001, when the Sudbury Neutrino Observatory experiment in Canada determined that as solar neutrinos travel through space, they oscillate, or change, between three flavors—electron, muon and tau. By the time neutrinos from the sun reach the Earth, they are an equal mixture of the three types.

The Davis experiment was sensitive only to electron neutrinos, so it was able to detect only one-third of the neutrinos from the sun. The solar neutrino problem was solved. 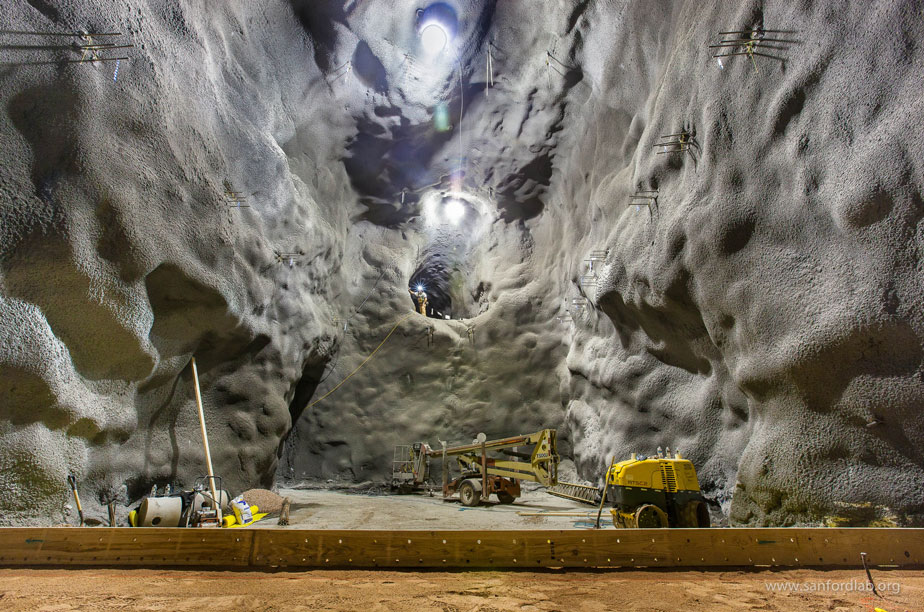 A different kind of gold

The Davis experiment ran for almost 40 years, until the mine closed in 2003.

But the days of science in the Davis Cavern weren’t over. In 2006, the mining company donated Homestake to the state of South Dakota. It was renamed the Sanford Underground Research Facility.

In 2009, many former Homestake miners became technicians on a $15.2 million project to renovate the experimental area.  They completed the new 30,000-square-foot Davis Campus in 2012.

Although scientists still ride in the cage to get down to the 4850-foot level of the mine, once they arrive it looks completely different.

“It’s a very interesting contrast,” says Stanford University professor Thomas Shutt of SLAC National Accelerator Laboratory. “Going into the mine, it’s all mining carts, rust and rock, and then you get down to the Davis Campus, and it’s a really state-of-the-art facility.”

The campus now contains block buildings with doors and windows. It has its own heating and air conditioning system, ventilation system, humidifiers and dust filters.

The original Davis Cavern has been expanded and now houses the Large Underground Xenon experiment, the most sensitive detector yet searching for what many consider the most promising candidate for a type of dark matter particle. Shielded from distracting background particles this far underground, scientists hope LUX will detect the rare interaction of dark matter particles with the nucleus of xenon atoms in the 368-kilogram tank.

Another cavern nearby was excavated as part of the Davis Campus renovation project and now holds the Majorana Demonstrator experiment, which will soon start to examine whether neutrinos are their own antimatter partners.

LUX began taking data in 2013. It is currently on its second run and will continue through spring 2016.

After its current run, LUX will be replaced by the LUX-ZEPLIN, or LZ, experiment, which will be 50 times bigger in usable mass and several hundred times more sensitive than the current LUX results.

Science in the mine is still the talk of the town in Lead, says Carmen Carmona, an assistant project scientist at the University of California, Santa Barbara, who works on LUX. “When you go out on the streets and talk to people—especially the families of the miners from the gold mine days—they want to know how it is working underground now and how the experiment is going.”

The spirit of cooperation between the mining community, the science community and the public community lives on, Regan says.

“It’s been kind of a legacy to provide the beneficial space and be good neighbors and good hosts,” Regan says. “Our goal is for them to succeed, so we do everything we can to help and provide the best and safest place for them to do their good science.”

Science was the star at an annual celebration in Lead, South Dakota.