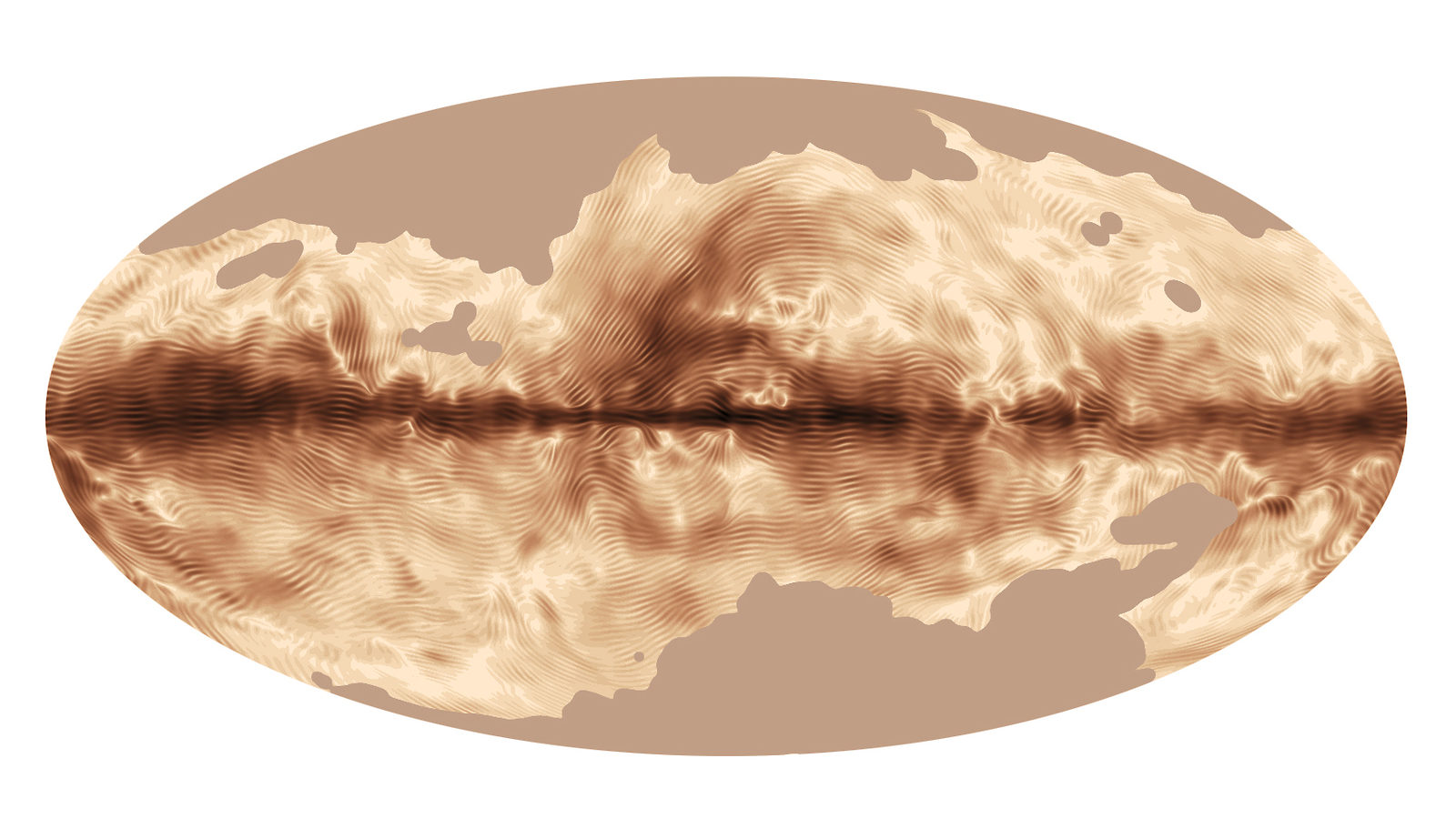 ESA and the Planck Collaboration

One of the most anticipated experimental results this year is scheduled to come from the European Space Agency’s Planck mission—and they’ve released a teaser of what it might look like.

The Planck mission was designed to study the early universe by measuring the Cosmic Microwave Background, or CMB, a low-frequency hum of energy leftover from the big bang. In doing so, it has also measured several other kinds of radiation, including the heat released by dust in our galaxy.

Planck scientists are studying how much of this local radiation is polarized, something that occurs when the dust becomes aligned along a magnetic field. If the dust emits enough polarized radiation, it makes it difficult to measure the polarization of the much fainter CMB.

Scientists are searching for a certain pattern in the CMB, called B-mode polarization, which could tell them about how the universe first formed.

“It’s so fundamental,” says Jan Tauber, ESA project scientist for Planck. “We’re trying to understand our universe and how it began. It’s amazing to think we can even dare to make this kind of model.”

Seeing B-mode polarization would serve as supporting evidence for the existence of primordial gravitational waves, ripples generated in the rapid expansion of the universe that initiated the big bang.

Theorists first posited the idea of cosmic inflation in the late 1970s, but until this March experimentalists had no evidence to support it. All of that changed when scientists on the BICEP2 experiment declared that they had seen a clear signal of B-mode polarization in the CMB—a landmark discovery, if it proves to be true.

Although a handful of experiments are now investigating or preparing to investigate the CMB, the next one to have a say on the matter is likely to be Planck, which has promised new results by October.

On May 7, Planck released a map showing the polarization of the heat emitted by interstellar dust.

Space-based Planck has a view of the entire sky, but the South Pole-based BICEP2 detector focuses on just one region. In the image Planck released, that region is left blank.

“In this map we are only showing the regions with the most intense radiation,” Tauber says. “Part of the sky is so dominated by this polarized radiation from our galaxy that we could never see the CMB through it. But a good fraction can be cleaned well enough that we will be able to use our data to measure the polarized CMB.”

Anyone with money on the March result hopes that Planck scientists will see what BICEP2 saw: a clear portion of the sky with a fairly unobstructed view of the polarized CMB. Anyone betting against it expects Planck to see something else: a mask of dust radiation, or a CMB signal too weak for the BICEP2 result to be correct.

“If the strength of the CMB signal is as high as BICEP2 says it is, then we should be able to see it as well,” Tauber says.

The completed parts of the Planck map form a beautiful, swirling fingerprint of our galaxy. We’re still waiting to find out what lies underneath.