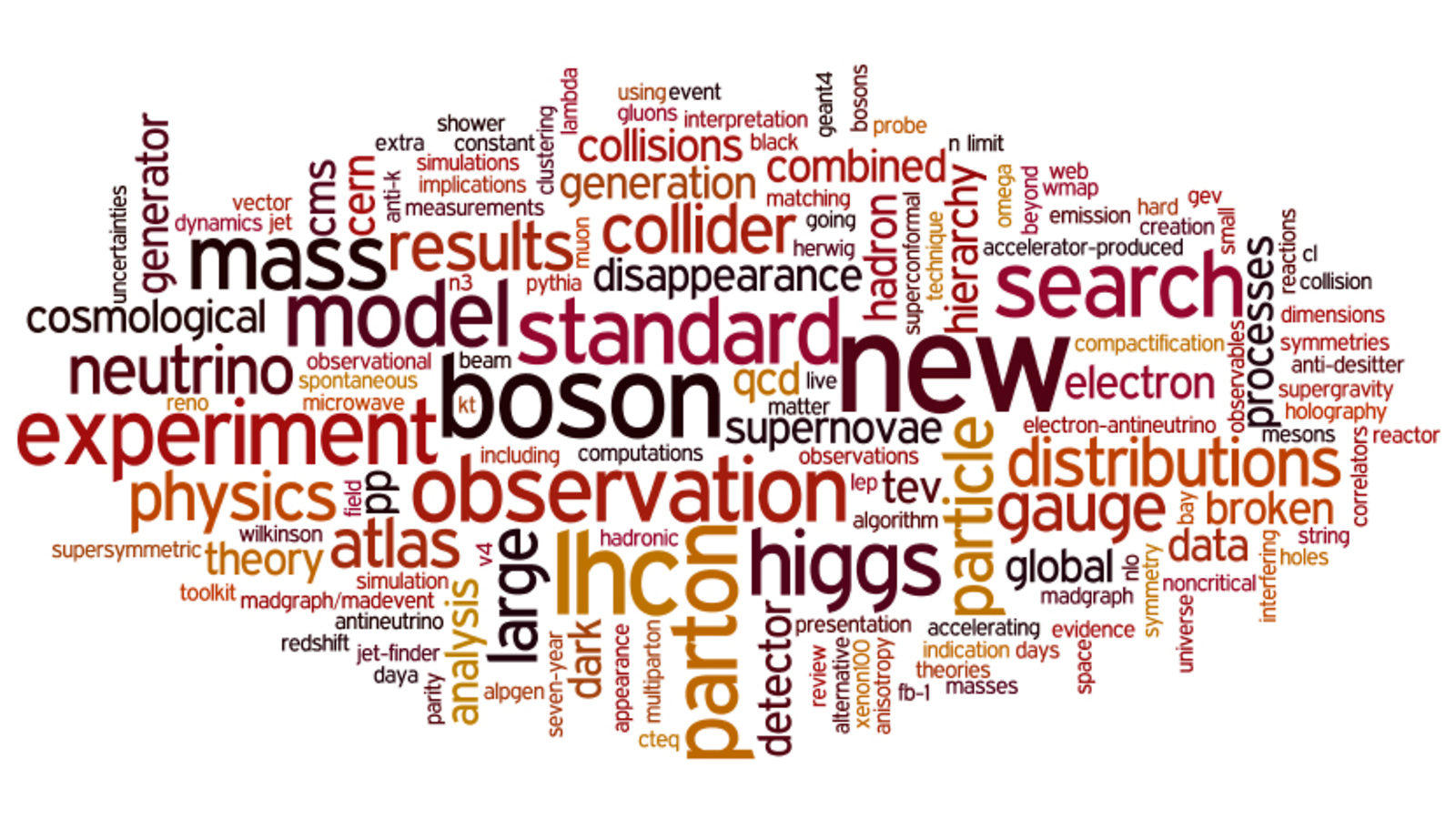 The Higgs boson is a popular subject among the most-cited physics papers of 2012, but a particle simulation manual takes the top spot.

Think of it as a particle physics version of pop radio's “top 40” countdown: INSPIRE, a database of particle-physics publications, has released its annual list of most-cited articles.

Topping the charts in 2012 are articles about the Higgs boson, which made up about 20 percent of the list.

But the most-cited publication of 2012 is a 583-page manual about PYTHIA, a program for simulating particle collisions and their byproducts. Researchers at Lund University in Sweden and Fermilab in the United States published the manual in 2006. The PYTHIA manual, which was cited in an estimated 1225 scientific articles in 2012, also ranked very high in INSPIRE's top-cited lists for 2011 and 2010.

INSPIRE, built and operated by a collaboration that includes CERN, the German laboratory DESY, Fermilab and SLAC, provides access to all high-energy physics papers and literature. Its predecessor, SPIRES-HEP, was a key driver in the early development and launch of the World Wide Web.

Heath O'Connell, a Fermilab information resources manager who helps oversee INSPIRE, says he’s not surprised that the Higgs boson is one of the hottest topics on this year’s list, appearing in both experimental and theoretical papers.

Based on the continuing attention to the Higgs discovery and the related ongoing research within the physics community, "certainly Higgs boson papers are going to rank very high up,” he says. “They are [also] well within reach of the top position for the 2013 list."

Papers about neutrinos and antineutrinos, supernovae, dark matter and dark energy, as well as other particle simulation programs, also grabbed top spots on the INSPIRE list. (The word cloud above shows common words in the titles of the 2012 top 40 papers.)

One about GEANT4, a set of tools for simulating particle interactions with matter, ranked fourth with an estimated 716 citations. A 2011 article about another particle physics code, MadGraph5, was the 17th most-cited article of 2012, and a 2007 article about an earlier version of the tool ranked 25th. These tools are widely used in experiments.

Not every paper in the INSPIRE database is considered for the top 40 list. The 1,528-page "Review of Particle Physics," published in July 2012, actually drew the highest citation count for 2012. But the annual publication "always gets the most citations because it is a directory of all the particle properties, taken from experimental results," O’Connell says. It isn't ranked because it's in a class of its own.

O'Connell and Bernard Hecker, head of the INSPIRE project at SLAC, note the diversity of topics and collaborators in the latest group of most-cited articles.

The INSPIRE database, from which the top 40 list is determined, reached a major milestone in its development in late April when it surpassed 1 million total records. In 2012 alone, INSPIRE added over 60,000 records.

Noting how fast INSPIRE has grown from its predecessor database, which launched with 74,000 papers in 1974, Hecker says, "I am immediately struck by this long list of people who have contributed over the years: Each generation, each cohort moving it forward a little bit farther, a little bit farther, and always as an important resource for the field.

"It continues to be absolutely essential" for researchers to tap into INSPIRE, he says. "It is the consistent effort of those people and those institutions over time that got it to a million. Now, it's an amazing resource.”  And growth isn’t just in records. “We’re adding important new features at an accelerating pace, like author disambiguation and providing access to data," he notes.

A historic list of annual and all-time top-cited papers, dating back to 1974, can be found on the INSPIRE website.

Counting the number of citations of a particular paper is one way to measure its impact and importance. But it is by no means the only gauge.

Citation numbers and the Impact Factor of journals are often used to evaluate the quality and the importance of research.

How is John Ellis, physicist at CERN, similar to Rod Steiger, actor from such films as On the Waterfront and The Pawnbroker?

On the shoulders of how many giants?

Scientists since the time of Sir Isaac Newton (and before) have built their work on the work of those who preceded them.