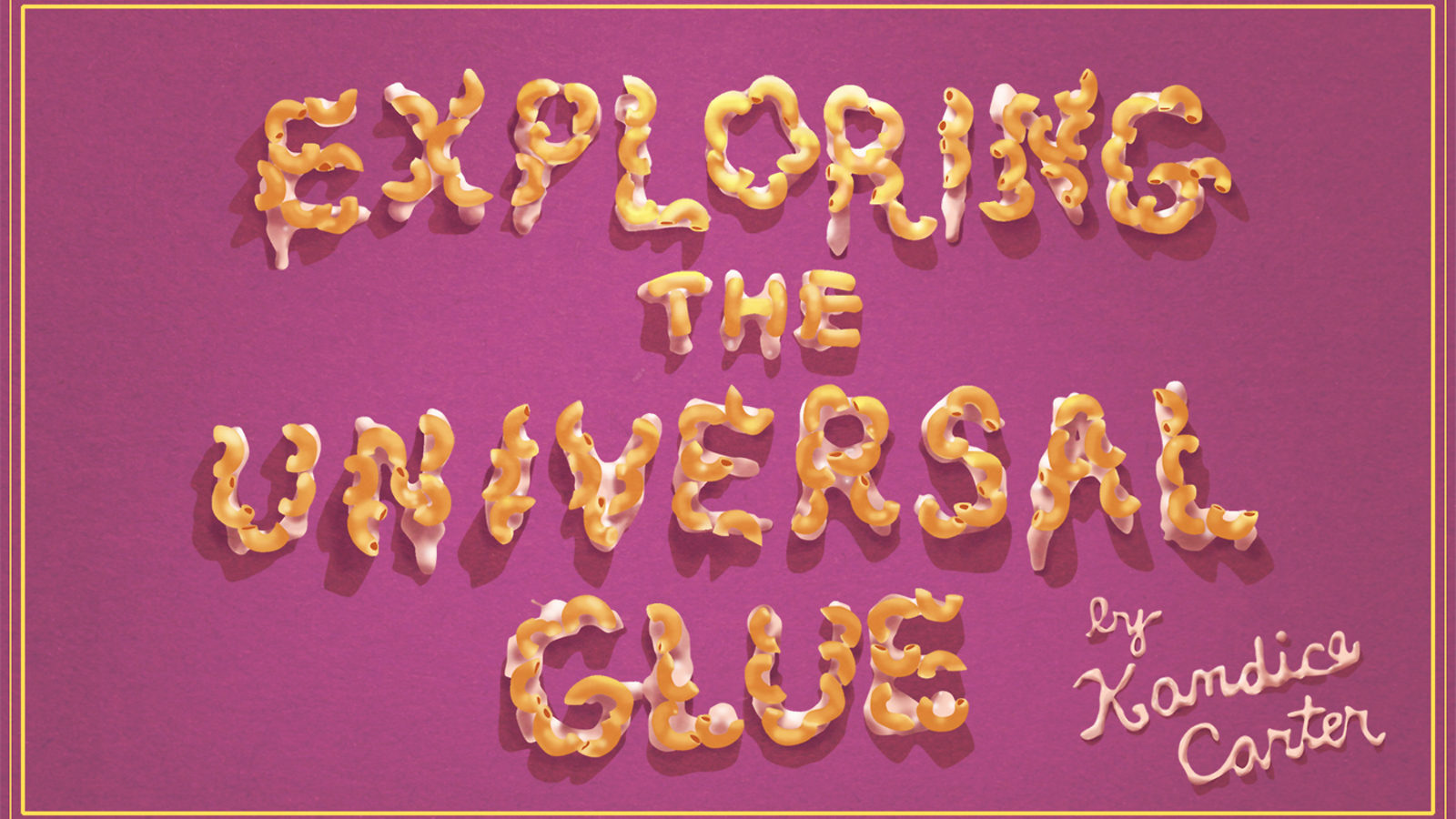 For most of us, glue is a simple binding agent that we use to stick things together. But in the heart of matter, glue takes on a far larger, more active role than the white paste that sticks macaroni to paper.

Gluons also generate mass. In the proton, for example, quarks alone account for less than a few percent of the total mass. The rest, physicists surmise, must come from the buildup of the gluonic field around the quarks in the proton.

This universal glue is the manifestation of the strong force—one of the four known fundamental forces in our universe, along with gravity, electromagnetism and the weak force. Of the four forces, it’s the most complicated and perhaps the least understood.

Before scientists can gain a complete understanding of the visible matter in our universe—the matter that makes up the 7 billion people on Earth, the stars in the sky and the earth beneath our feet—they will need to finally understand the universal glue that springs from the strong force. A new experiment at Jefferson Lab seeks to do just that.

Of matter and glue

In addition to explaining the proton’s relatively large mass, understanding the strong force will help answer a number of other mysteries in particle physics.

The proton’s spin, for example, can’t be explained by its constituent quarks alone, which contribute less than a third of the final value. This and other properties seem to come from the non-quark components of the proton: the stuff that springs from the glue.

This stuff is described by the theory of quantum chromodynamics, which is the mathematical theory that describes the strong force. QCD charts how quarks (and gluons) interact, accounting for the fact that the quarks and gluons aren't building blocks like bricks and mortar but instead are mobile and dynamic.

In QCD, the proton is built of a roiling sea of quarks and glue. The quarks are surrounded by the energy of the strong force. This field of energy boils and bubbles up into gluons, as well as into matter in the form of transient quarks, which form and nearly instantaneously dissolve back into glue. It's now popularly thought that the quark–gluon sea gives rise to the properties of protons that can't be accounted for by the quarks alone.

"Quarks are never free,” says Jozef Dudek, a theoretical physicist at Old Dominion University and Jefferson Lab. “And the problem is that we don't precisely understand, in QCD, why it's that way. We can't really prove why it's that way. So there are two sorts of approaches to that.

"One is to do more theoretical work, of course. The other is: Is there something we could do experimentally that could give us a hint as to how QCD confines?"

In hopes of answering that question, scientists have turned to experiments conducted with particle accelerators.

Into the heart of matter

Experiments conducted with accelerators account for much of our knowledge of QCD. Accelerators provide scientists with powerful probes, allowing the exploration of a particle's structure, the tearing apart of ordinary matter to produce particles and rare states of matter. Such experiments revealed the quarks inside protons and neutrons, illuminated other quark-based particles, provided glimpses of the forces that moderate those particles, produced states of matter not seen in the universe since just after the big bang, and recently, at the most energetic machine in operation today, the Large Hadron Collider, pegged the Higgs boson.

But it's not just brute force that can reveal the heart of matter: Less energetic, but high-luminosity accelerators—accelerators that provide high rates of particle collisions for study—can also offer a window into the particles and forces that shape our universe.

Jefferson Lab's Continuous Electron Beam Accelerator Facility has long been known for its precision studies. An upgrade is now underway to extend the CEBAF accelerator’s precision to higher energies.

The upgrade will increase the experimental reach of the accelerator by doubling the maximum energy of its electron beam from 6 billion to 12 billion electron-volts, thus halving the wavelength of the electron probe. This will double the facility's reach into the heart of matter without compromising its high luminosity and large statistical precision.

To explore the strong force glue, scientists will hurl high-energy electrons at a thin sliver of diamond about one-fifth the thickness of a human hair. Some of the electrons will be diverted by the diamond's crystal structure, emitting gamma rays that then zip the length of a football field into Jefferson Lab’s newly built Hall D. There, they will pass through a hole about the size of a grain of rice and slam into a target: a glass tube filled with hydrogen. 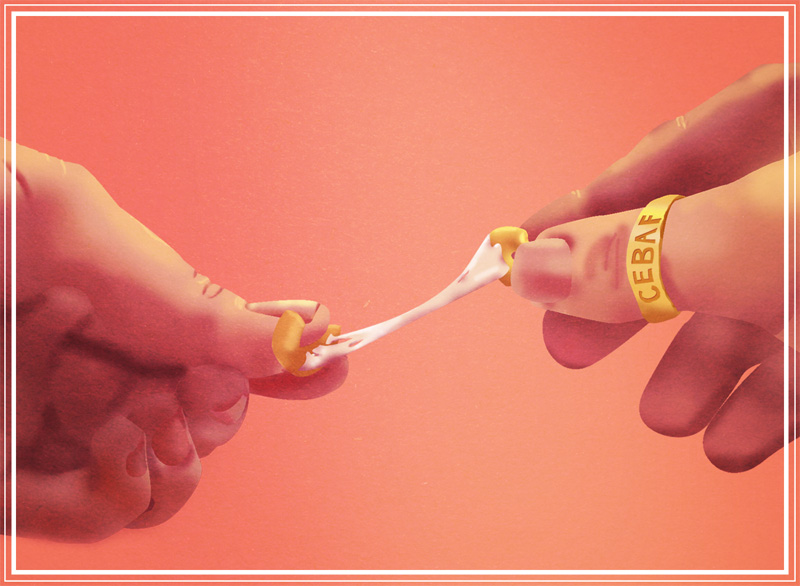 "The photon interacts with some quark inside a proton in the hydrogen. It hits it very hard and that quark is then, in a sense, kicked out of the proton, but it can't really get kicked out of the proton, because of the confining force," says Curtis Meyer, a professor at Carnegie Mellon and spokesperson for a new experiment in Hall D called GlueX. "So it winds up creating a quark–antiquark pair.”

The GlueX team will search for unusual quark–antiquark pairs that are bound together by a kind of modified glue.

"Within QCD, there's one number that tells you how strongly the quarks couple to gluons, and the gluons stick to each other with the same, large strength," Dudek explains.

By looking for quark–antiquark pairs where the gluonic field is excited in some way—doing something more than passively sticking the quarks together—the GlueX collaboration hopes to discover new insight into gluons’ actions.

"The whole idea is that you've basically produced a spectrum of particles where you've excited the glue that's binding them,” Meyer says. “So it gives you information about the field that's binding these quarks and antiquarks together."

Binding it all together

From the approximately 20,000 potentially interesting events expected each second, the GlueX experiment will record about 2 gigabytes of data. The experimental team will mine this ever-growing dataset for quark–antiquark pairs bound by unusual gluonic fields. The researchers will measure the particles' masses, since mass is related to the energy stored in the excited glue.

"The GlueX collaboration is thrilled to be so close to the start of physics just two years from now," Meyer says. “The road to science with GlueX has entered its final stretch, as the construction of the experiment transitions into installation and commissioning. This has led to a large influx of PhD students and with a corresponding increase in the discussion of the science that we will do, and how we will get it done."

In short, it’s an exciting time. Researchers are now assembling the equipment needed to carry out this highly detailed experiment. The first data—and hopefully a better understanding of the glue that affects all visible matter in our universe—should start flowing in 2015.

While it's not uncommon in nuclear and particle physics to build a facility for just one experiment, the researchers already see a future for Hall D after GlueX. Space has been reserved in the facility for an additional particle identification system that will help researchers understand light-quark mesons, which are particles that are built of combinations of up, down or strange quarks and antiquarks. Another experiment will specifically study the eta meson, a meson that contains all of these light quarks, in more detail. Additional experiments are now under discussion.

Meyer says he and his colleagues are looking forward to capitalizing on Hall D’s unique collection of detector systems to provide better insight into the inner workings of the particles that build our visible universe, and they welcome ideas for further investigations.

A piece of steel may look cold and lifeless. But like any other piece of matter, it is bursting with activity deep inside.