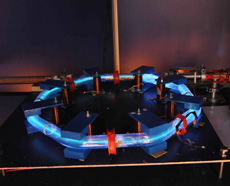 When most people think about France and particle physics, they think of the Large Hadron Collider, the world’s largest atom smasher, spanning multiple towns and two countries. But around Paris, it is a tabletop accelerator that has locals amped up.

Near the Trocadéro palace, science enthusiasts can peer into the guts of one of the world’s smallest functioning electron accelerators.

A glass design allows visitors to witness the birth of a particle beam from a heated piece of metal called a cathode. Helium atoms, excited by the accelerated electrons in the linear accelerator pipe, emit blue and yellow light. These bursts of light merge into a steady green beam, showing either linear or circular electron trajectories.

A set of controls allows visitors to learn about electromagnetic forces as they watch the beam’s journey and see how magnetic fields—from both magnets and the Earth—push and pull the beam along its circular path.

The colorful light gliding across the tabletop accelerator has earned the nickname “the electron’s dance.”

This hands-on mini accelerator, unveiled in October 2011, is a petite replica of the Orsay collider ring “ACO,” which operated from 1965 to 1988. The full-size ring at the Laboratoire de l’Accélérateur Linéaire, a predecessor to the Large Hadron Collider, now serves as a museum and French historic landmark.