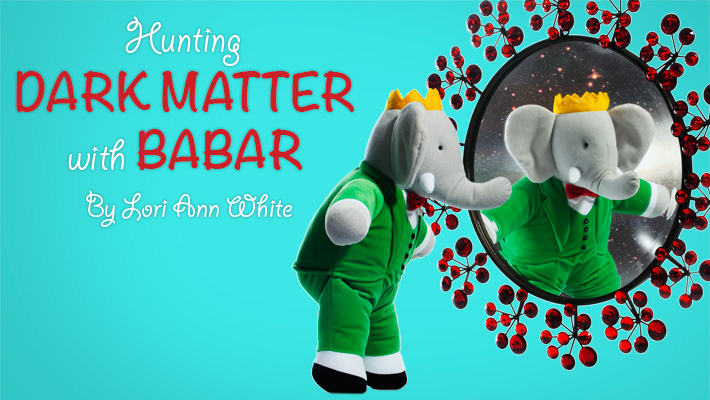 Elsewhere on the web

The world of high-energy physics is closing in on the Higgs. Late last year, reports appeared of suspicious bumps in data from the Large Hadron Collider; shortly thereafter, results from the Tevatron joined in, nicely harmonizing with the LHC’s hints. A crescendo of evidence is building, and many researchers find reason to hope that the discovery of the Higgs boson could come this year.

But the Higgs is not the final answer to questions of matter and energy, where they come from and how they make up our universe. The Higgs isn’t even the final particle to pin down—just the final fundamental particle of the Standard Model, a model of how our universe is put together at the smallest levels.

It’s a model that’s highly successful, but not entirely sufficient to describe the universe.

There’s dark matter out there, surrounding us, its gravity shaping everything from tiny dwarf galaxies to galactic super-clusters to the universe itself. Dark matter makes up nearly a quarter of all the matter and energy in the universe, but so far we have only succeeded in studying it indirectly, through its gravitational effects on the matter we can see.

And dark matter doesn’t fit in the Standard Model.

One of those unexpected places is SLAC National Accelerator Laboratory, a Department of Energy laboratory tucked in the oak-covered hills above Stanford University. Physicists there are busy combing data from the BaBar experiment for answers to dark-matter questions that weren’t even dreamed of when the data were captured. 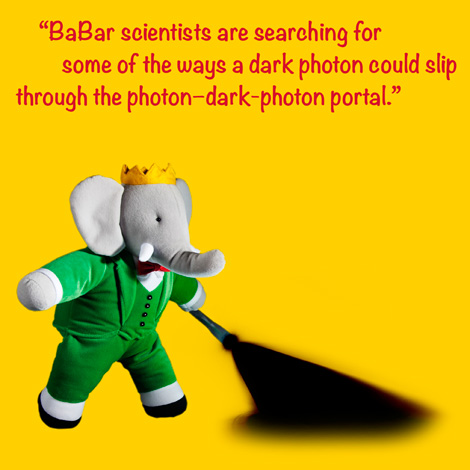 “Dark matter is five times more prevalent than the matter we’re made of,” says Abner (Abi) Soffer, physics coordinator for the BaBar experiment. “And until recently, physicists thought there was only one dark-matter particle. But we know of so many normal-matter particles, why would dark matter have only one?”

The “normal matter” Soffer refers to is the Standard Model’s laundry list of fundamental particles. There are the matter-makers: six types of quark, two of which make up protons and neutrons; the electron and its two bigger relations, the muon and the tau; and their attendant neutrinos. Then there are the force carriers: the photon, the W and Z bosons and the gluon. And the Higgs, of course.

What if some of these particles have dark matter counterparts?

Whether dark matter has its own list of fundamental particles is a reasonable question, and one that’s being asked by physicists more often. But dark matter itself is not rushing to answer. When you can’t even capture a single wisp of the stuff, it’s hard to compare it to another wisp that’s also just out of reach. Without knowing more about dark matter than that it’s subject to gravity, cosmologists have had to treat it as a featureless, gravitating blob. Particle physicists hoped to bring some definition to the blob, but thus far the very massive dark-matter particles they’ve been looking for haven’t appeared in even the highest-energy particle accelerators; nor have they been detected in dedicated underground experiments.

Then, in experiments that combine the realms of particle physics and cosmology, hints of what could be explained as more complex dark matter interactions began to appear. In 2008, the European particle-detecting satellite PAMELA reported detecting more cosmic-ray positrons than expected, a finding later confirmed by the Fermi Gamma-ray Space Telescope. This was followed in short order by data from ATIC, an international balloon-borne experiment flown from the South Pole, which found more electrons and positrons than expected.

One way to explain these results is that, along with the massive dark-matter particles, there exist much less massive particles, such as dark photons and dark Higgs bosons.

“The nice thing about these results,” says Soffer, “is that they opened people’s imagination to the possibility that low-mass dark-matter particles exist.” In other words, light dark matter.

This resulted in a flood of papers and new theoretical ideas, including theories that could explain the extra positrons and electrons.

Physicists use the term “portal” to describe ways in which dark matter and normal matter can interact. One of those portals connects our photon and the dark photon. There is, say the new theories, a certain probability that a dark photon will turn into a regular photon and vice versa. If evidence for this transformation can be found, the first cracks would appear in the smooth face of the dark-matter monolith.

“So the theorists come to the experimentalists and say, ‘We have a bunch of ideas for you!’,” says Bertrand Echenard, a BaBar researcher from Caltech. These ideas set the BaBar scientists searching for some of the ways a dark photon could slip through the photondark-photon portal.

This was not the original purpose of the BaBar experiment. BaBar was designed to study why there’s more matter than antimatter in the universe by smacking electrons and positrons together and seeing what shook out. The experiment stopped taking data in April 2008, the same year two Japanese theorists, Makoto Kobayashi and Toshihide Maskawa, won the Nobel Prize in Physics, in a large part because BaBar and its sister experiment Belle in Japan had been so successful at confirming their theory.

After such an achievement, one would think that BaBar could take a graceful bow and exit stage left, but there were still eight years of data that could be searched for the answers to other questions. When the theorists presented their idea—that electrons and positrons could create these dark photons when they collide—the BaBar dataset was ready and waiting.

Echenard, one of the BaBar physicists who jumped in to test the new ideas about light dark matter, combed through approximately nine billion electronpositron collisions, looking for a specific decay process: an electron and a positron colliding, with whatever particles that collision created eventually decaying into six light particles. Echenard concentrated on searching for combinations of six electrons and muons, but pions, the lightest of the particles made of two quarks, counted too. Echenard looked for this particular signature because—according to some of the new models—there’s a chance that when an electron and positron collide they create a dark Higgs boson and a dark photon. The dark Higgs decays to two more dark photons, and each of the three dark photons decays to two light particles, making six light particles in all.

Of the billions of collisions he studied, Echenard expected to find just a handful of background events—other processes that may look like the sought-after dark-matter particles, but are actually due to known processes mimicking their signature.

“That means six events passed the selection criteria, which is consistent with the expected background,” Echenard explains. “The key point here is that we expect a few background events, and that’s what we observe.”

Echenard didn’t manage to discover light dark photons and dark Higgs bosons, but he set new and stringent limits, indicating where to keep looking. He and other BaBar researchers are also looking through the BaBar data for the end results of other possible light dark matter decays.

Ultimately, the precision of the limits set by BaBar is determined by the amount of data the experiment collected over its eight years of running. The next generation of electronpositron experiments—SuperB in Italy and Belle-II in Japan—will collect about 100 times more data, allowing them to search for light dark matter with much greater sensitivity than the current generation.

And electronpositron experiments like BaBar and Belle are not the only means particle physicists have to pursue dark photons. From experiments the size of the LHC to small, fixed-target experiments, scientists are using every tool at their command to shine a light on dark matter.

Before particle physicists could control their particles well enough to get two accelerated beams to collide, they conducted “fixed target” experiments in which they slammed particles into stationary targets. In 2009, several SLAC theorists realized fixed-target experiments could help find dark photons. They even went back to the data from SLAC and Fermilab fixed target experiments performed in the 1980s that were originally looking for exotic particles such as axions and photinos, finding that the data from these old experiments could indeed be used for dark photon searches.

Their ideas inspired a new fixed target experiment called the Heavy Photon Search at Thomas Jefferson National Laboratory in Virginia. (Because the dark-matter photons the experiment searches for have a tiny bit of mass—as opposed to our photon’s none—they’re called “heavy” photons.) The HPS team will slam electrons into a sheet of tungsten foil and look for the resulting electronpositron pairs using a brand-new detector: the Silicon Vertex Tracker, or SVT, built at SLAC.

The detector is designed to track the electronpositron pairs, but also identify the location where they pop into being, called the vertex. If the vertex appears some distance beyond the foil, an unseen particle—like a dark photon—was created first, then flew a certain distance before decaying into the electronpositron pair. HPS began its search this spring with a three-week trial, after which the beam line it’s using will be improved and it can begin the search in earnest.

Fixed-target experiments and collider experiments (such as BaBar) are complementary. The former are much more sensitive to dark-matter particles with very low masses, whereas BaBar’s and Belle’s area of operation is at intermediate masses. The ATLAS and CMS experiments operating at the LHC are sensitive to masses that are hundreds of times larger.