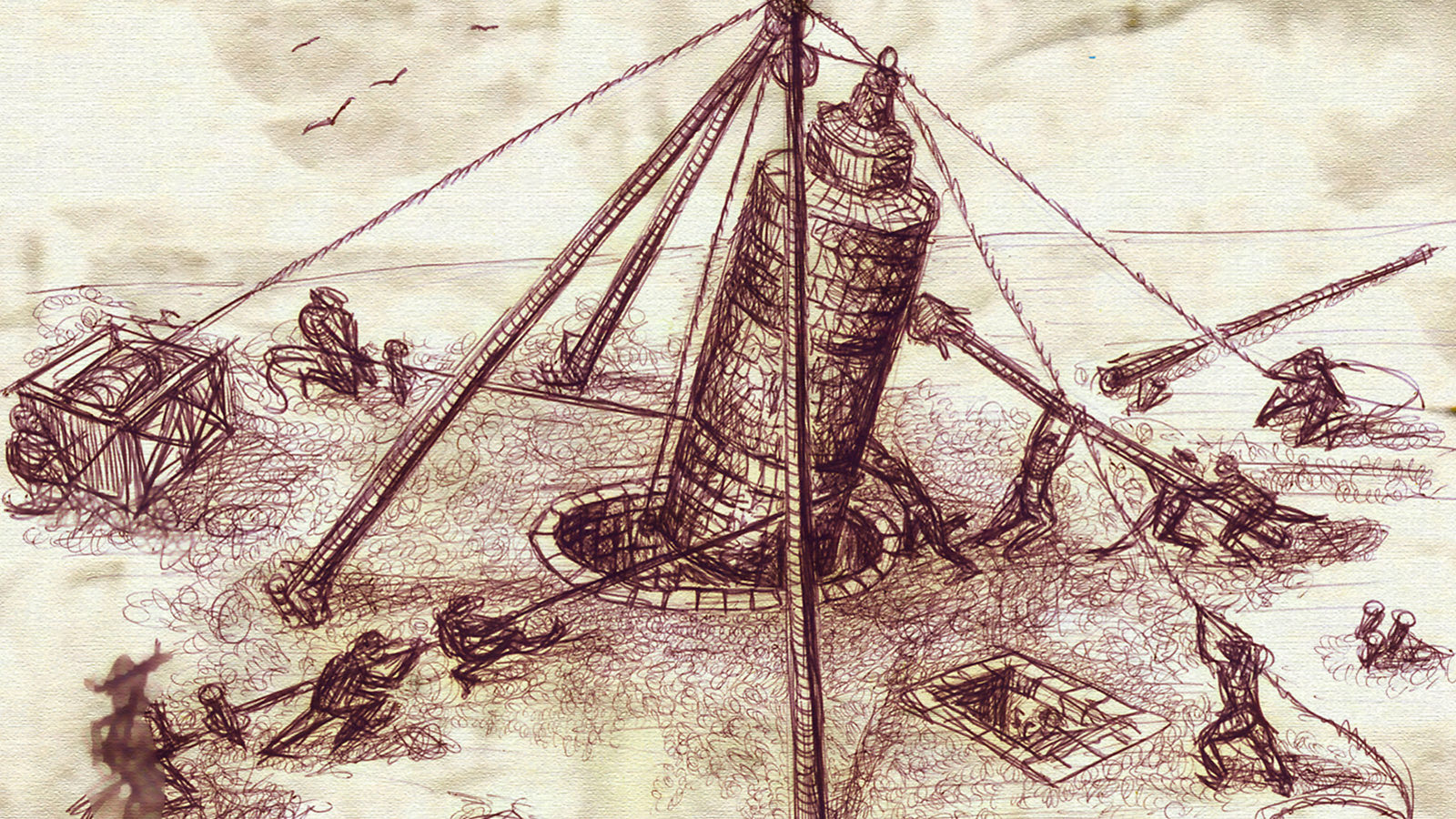 A physicist sketches science in the style of an old master.

Sergio Cittolin is first and foremost a physicist in search of answers to the mysteries of the universe. Yet he also has an artistic bent, and his talent for drawing has woven itself nicely into his 30 years of work at CERN. The result is a collection of Leonardo da Vinci-style illustrations that brighten CERN hallways, a book, and the covers of a number of technical documents.

Cittolin has been an incessant doodler since his early years in Vittorio Veneto, Italy. He has sketched his way through school lectures and professional meetings. Now in charge of trigger and data acquisition for the Compact Muon Solenoid experiment at the Large Hadron Collider, he tends to chair meetings rather than just attend them; “This has made it more difficult to find the time to sketch,” he admits.

In 1992 the first of Cittolin’s da Vinci-style drawings appeared on the cover of a CMS experiment design report. With collider operations still years away and key technologies not yet invented, “I thought that the Leonardo style was suitable to give the feeling of anticipation of new ideas,” he says. “Da Vinci was the father of all engineers and described many of his inventions a long time before technology was ready to realize them.”

As a naturalist, da Vinci probed, prodded, and tested his way to a deeper understanding of how organisms work and why, often dissecting his object of study with this aim. “I thought, why not present the idea of data analysis to the world within the naturalist world of Leonardo?” Cittolin says. In the drawing below, the CMS detector is the organism to be opened; the particles passing through it and the tracks they leave behind are organs exposed for further investigation. 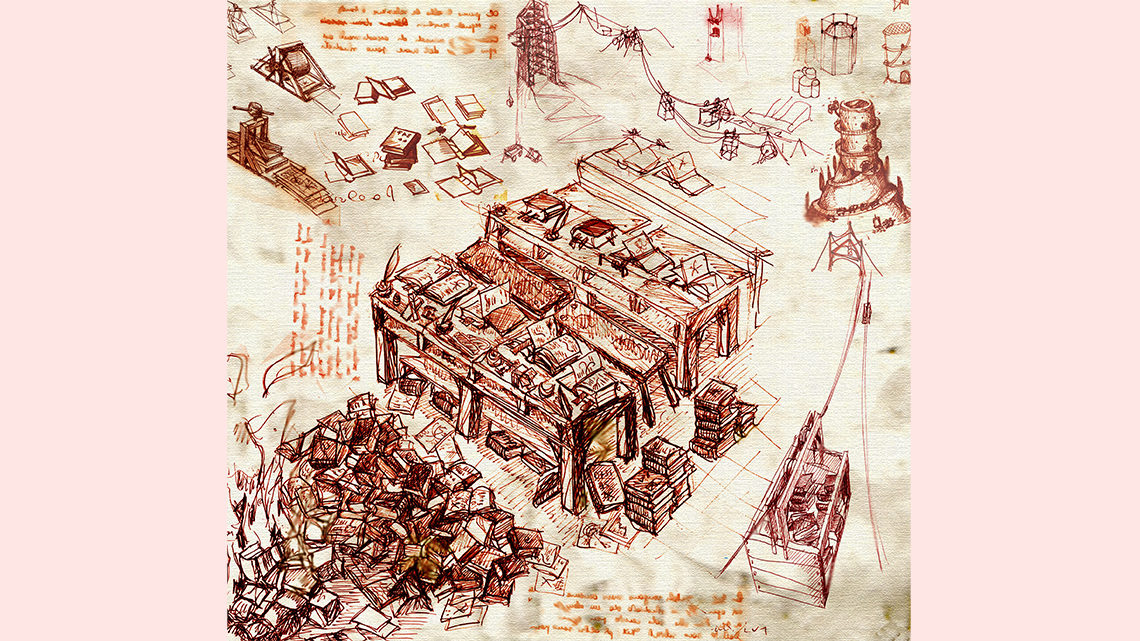 Particle events depicted as books. The few stacked neatly in piles are events selected by the CMS high-level trigger system for further study; more than 99 percent have been rejected and tossed in a pile. 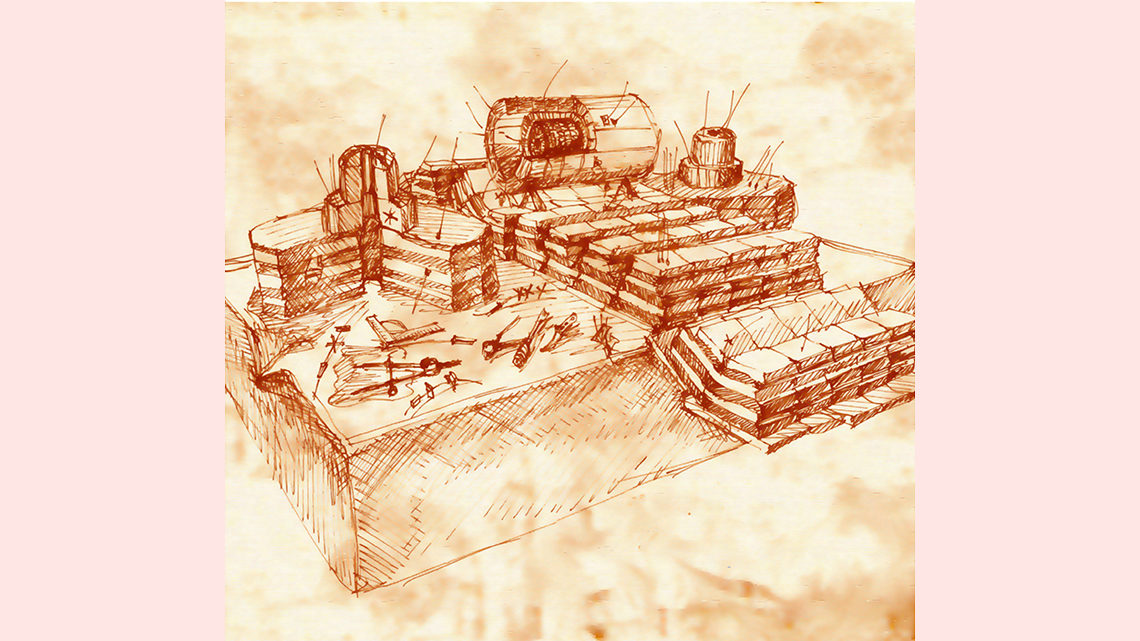 Like a body on the anatomy table, the detector is dissected to extract information about particle events. 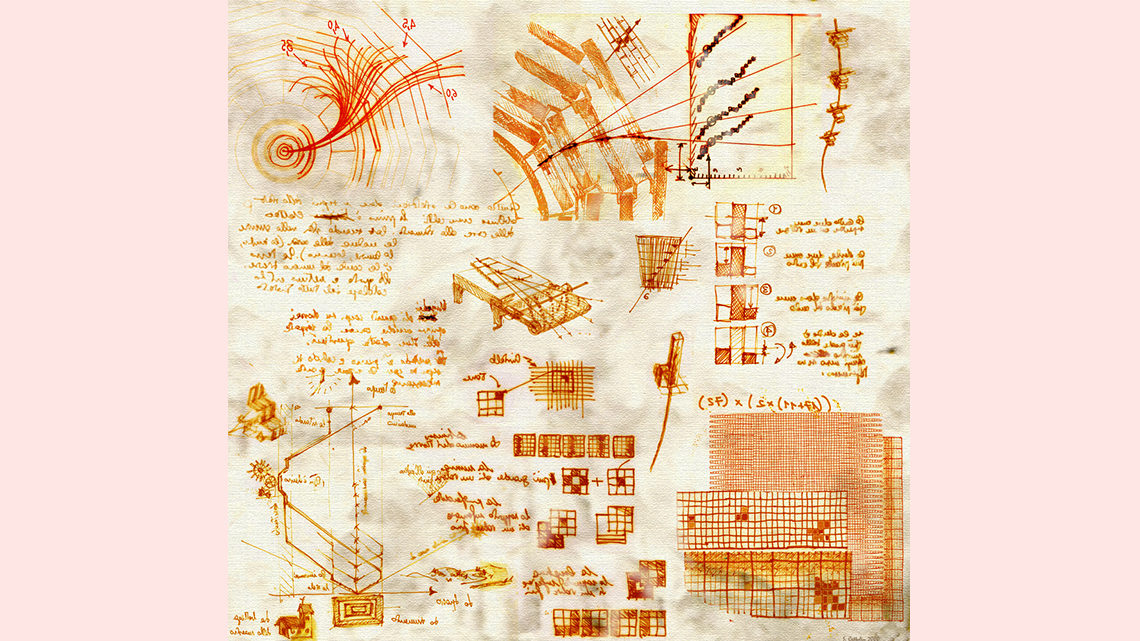 In the first stage of sifting particle events to find the most interesting ones, algorithms in a two-dimensional matrix are used to identify electrons, jets and muons. 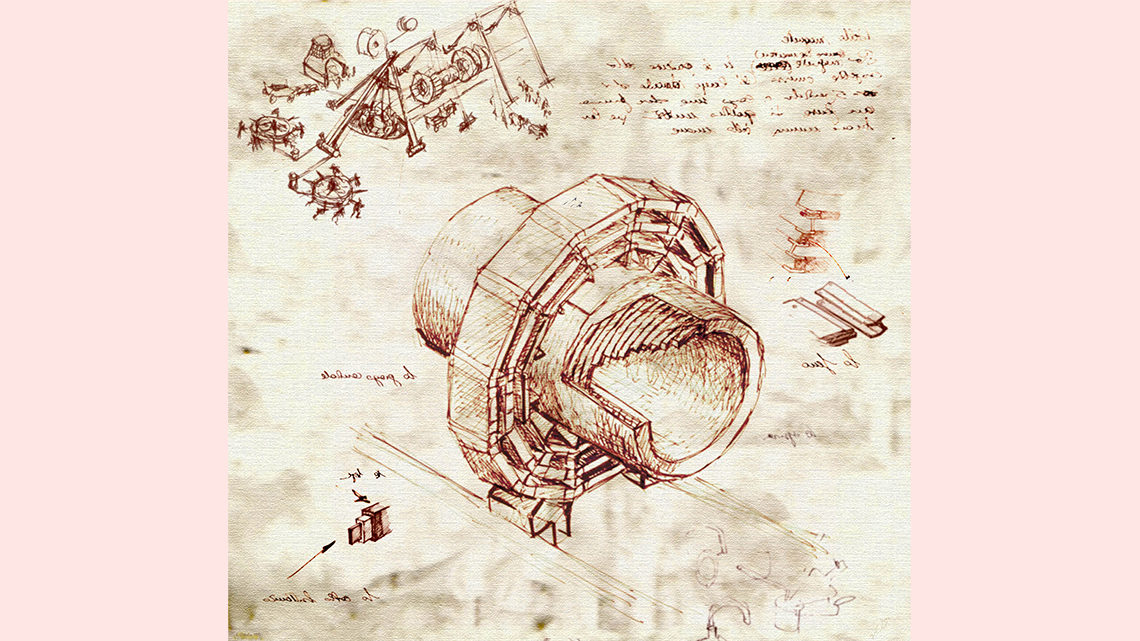 One slice of the CMS detector is cut away to expose the magnet coil. 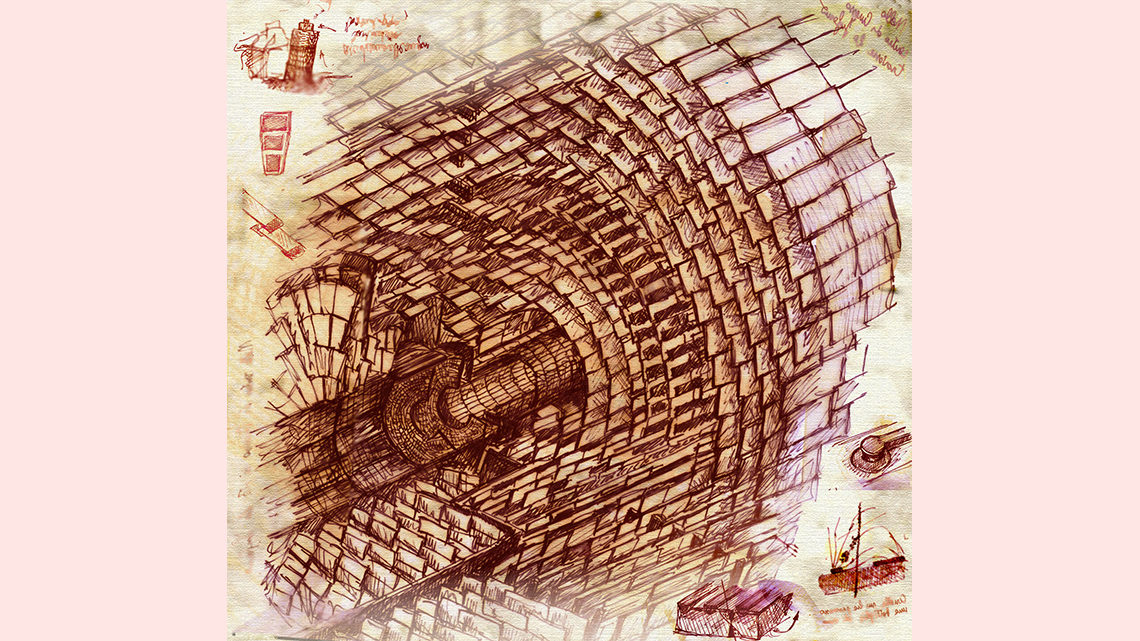 A drawing of the innermost part of the CMS detector, bristling with silicon tiles, took inspiration from the nine circles of hell in Dante Alighieri’s Divine Comedy. 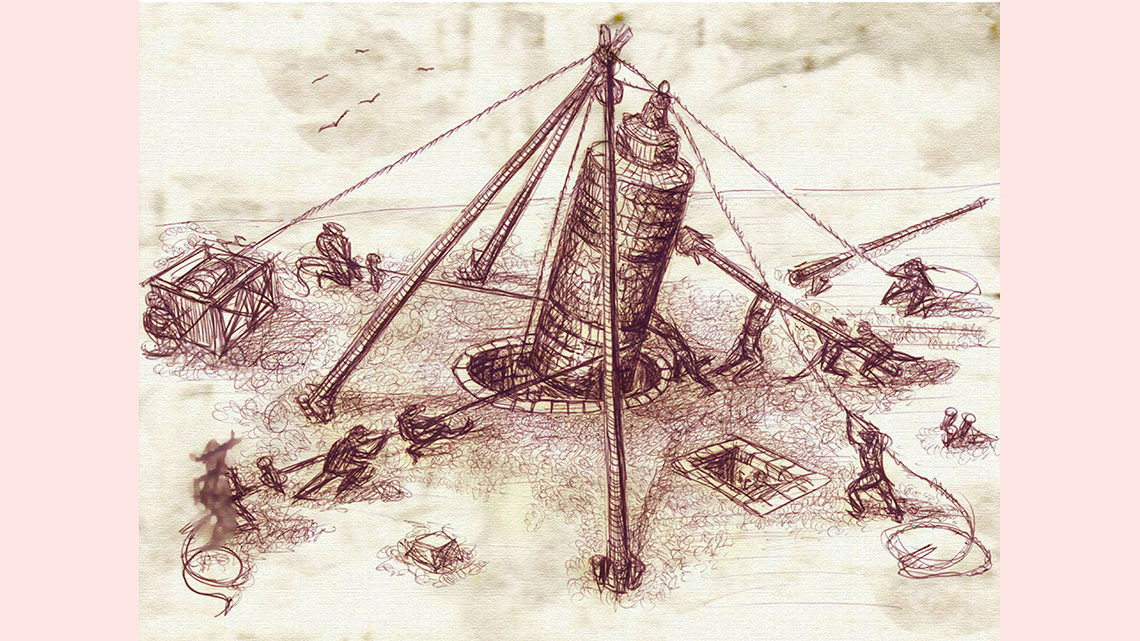 The CMS detector is lowered into the experimental hall.

Illustration by Sergio Cittolin
Previous Next

Cittolin brings a sense of humor to his work. For example, after betting CMS colleague Ariella Cattai that he could produce a quality drawing for the cover of the CMS tracker technical proposal by a given deadline, he included in the drawing a secret message in mirror-image writing—which was also a favorite of da Vinci’s. The message jokingly demanded a particular reward for his hard work. The completed picture was delivered on time and within a few hours Cattai cleverly spotted and deciphered the message. She promptly presented him with the requested bottle of wine.

Paris Sphicas, physics coordinator for the CMS experiment, says of Cittolin’s artwork, “The graphics are amazing in numerous ways. Foremost is the depiction of modern-day systems and actions in terms of medieval elements: the tons of data are drawn as piles of books; lasers become oil lamps; complicated systems, typically electronic, find mechanical analogs which are ingeniously conceived. Second, all these elements are combined in a way that the drawing gives, literally, a very short summary of what takes about 500 pages to describe. Third, it’s the art itself: it’s all drawn in the da Vinci style. From the text—which, of course, reads backwards and can only be deciphered in front of a mirror—to the line technique, the drawings look and feel like genuine works of Leonardo himself.”

Even with 10 technical manual covers to his credit, having his illustrations published in The Particle Odyssey by Oxford University Press, and seeing his artwork exhibited on the walls of CERN, Cittolin is all about the physics. “The biggest pleasure is to complete what I’ve started and see it working at the LHC,” he says. “It is a real adventure to build something so unique and maybe fundamental.”

As for his drawings, Cittolin modestly insists that they are “just pictures,” adding, “Maybe I will find more time to draw in retirement.”