Newly discovered galaxies could present scientists with more opportunities to search for signatures of dark matter. 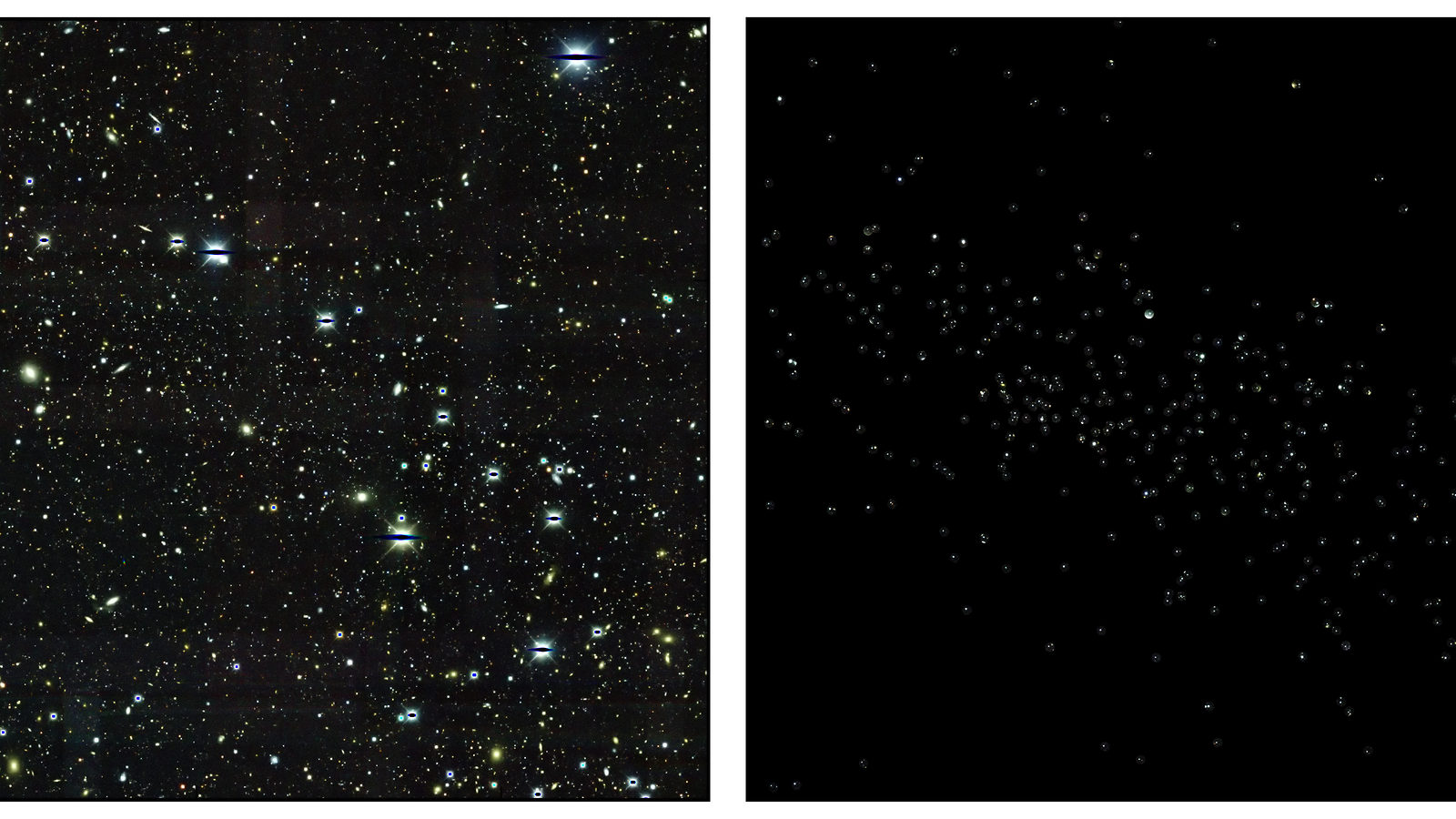 Scientists on two continents have independently discovered a set of celestial objects that seem to belong to the rare category of dwarf satellite galaxies orbiting our home galaxy, the Milky Way.

Dwarf galaxies are the smallest known galaxies, and they could hold the key to understanding dark matter and the process by which larger galaxies form.

A team of researchers with the Dark Energy Survey, headquartered at Fermi National Accelerator Laboratory, and an independent group from the University of Cambridge jointly announced their findings today. Both teams used data taken during the first year of the Dark Energy Survey, all of which is publicly available, to carry out their analysis.

“The large dark matter content of Milky Way satellite galaxies makes this a significant result for both astronomy and physics,” says Alex Drlica-Wagner of Fermilab, one of the leaders of the Dark Energy Survey analysis.

Satellite galaxies are small celestial objects that orbit larger galaxies, such as our own Milky Way. Dwarf galaxies can be found with fewer than 100 stars, and are remarkably faint and difficult to spot. (By contrast, the Milky Way, an average-sized galaxy, contains billions of stars.)

These newly discovered objects are a billion times dimmer than the Milky Way, and a million times less massive. The closest of them is about 95,000 light-years away. 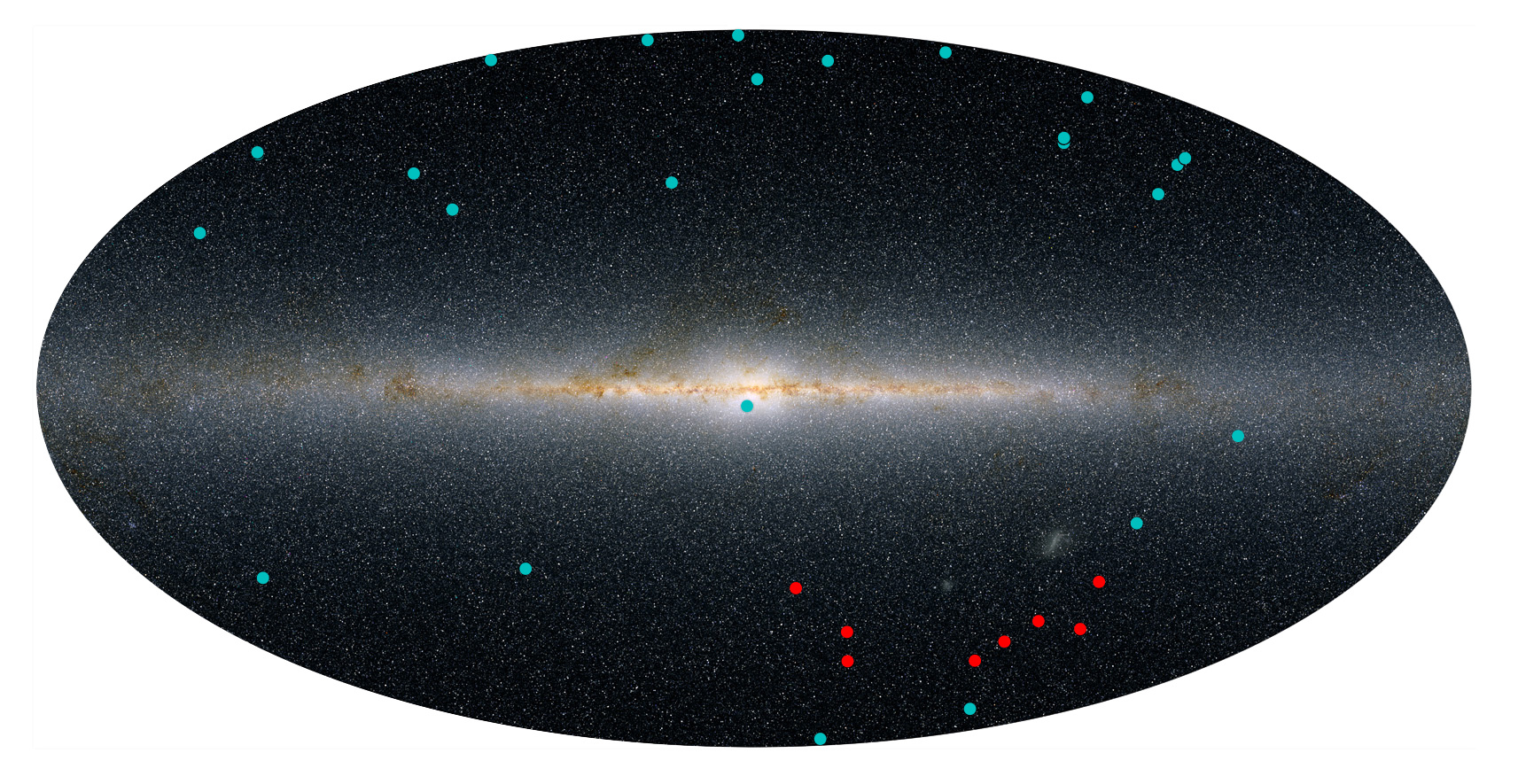 Atlas image obtained as part of the Two Micron All Sky Survey (2MASS), a joint project of the University of Massachusetts and the Infrared Processing and Analysis Center/California Institute of Technology, funded by the National Aeronautics and Space Administration and the National Science Foundation.

“The discovery of so many satellites in such a small area of the sky was completely unexpected,” says Cambridge’s Institute of Astronomy’s Sergey Koposov, the Cambridge study’s lead author. “I could not believe my eyes.”

Scientists have previously found more than two dozen of these satellite galaxies around our Milky Way. About half of them were discovered in 2005 and 2006 by the Sloan Digital Sky Survey, the precursor to the Dark Energy Survey. After that initial explosion of discoveries, the rate fell to a trickle and dropped off entirely over the past five years.

While more analysis is required to confirm any of the observed celestial objects as satellite galaxies, researchers note their size, low surface brightness and significant distance from the center of the Milky Way as evidence that they are excellent candidates. Further tests are ongoing, and data collected during the second year of the Dark Energy Survey could yield more of these potential dwarf galaxies to study .

Newly discovered galaxies would also present scientists with more opportunities to search for signatures of dark matter. Dwarf satellite galaxies are dark-matter-dominated, meaning they have much more mass in unseen matter than in stars. The nature of this dark matter remains unknown, but might consist of particles that annihilate each other and release gamma rays. Because dwarf galaxies do not host other gamma ray sources, they make ideal laboratories to search for signs of dark matter annihilation. Scientists are confident that further study of these objects will lead to even more sensitive searches for dark matter.

In a separate result also announced today, the Large Area Telescope Collaboration for NASA’s Fermi Gamma-Ray Telescope mission reported that they did not see any significant excess of gamma ray emission associated with the new Dark Energy Survey objects. This result demonstrates that new discoveries from optical telescopes can be quickly translated into tests of fundamental physics.

“We did not detect significant emission with the LAT, but the dwarf galaxies that DES has and will discover are extremely important targets for the dark matter search,” says Peter Michelson, spokesperson for the LAT collaboration. “If not leading to an identification of particle dark matter, they will certainly be useful to constrain its properties.”

The Dark Energy Survey is a five-year effort to photograph a large portion of the southern sky in unprecedented detail. Its primary instrument is the Dark Energy Camera, which–at 570 megapixels–is the most powerful digital camera in the world, able to see galaxies up to 8 billion light years from Earth. Built and tested at Fermilab, the camera is now mounted on the 4-meter Victor M. Blanco telescope at the Cerro Tololo Inter-American Observatory in the Andes Mountains in Chile.

The survey’s five-year mission is to discover clues about the nature of dark energy, the mysterious force that makes up about 70 percent of all matter and energy in the universe. Scientists believe that dark energy may be the key to understanding why the expansion of the universe is accelerating.

“The Dark Energy Camera is a perfect instrument for discovering small satellite galaxies,” says Keith Bechtol of the Kavli Institute for Cosmological Physics at the University of Chicago, who helped lead the Dark Energy Survey analysis. “It has a very large field of view to quickly map the sky and great sensitivity, enabling us to look at very faint stars. These results show just how powerful the camera is, and how significant the data it collects will be for many years to come.”