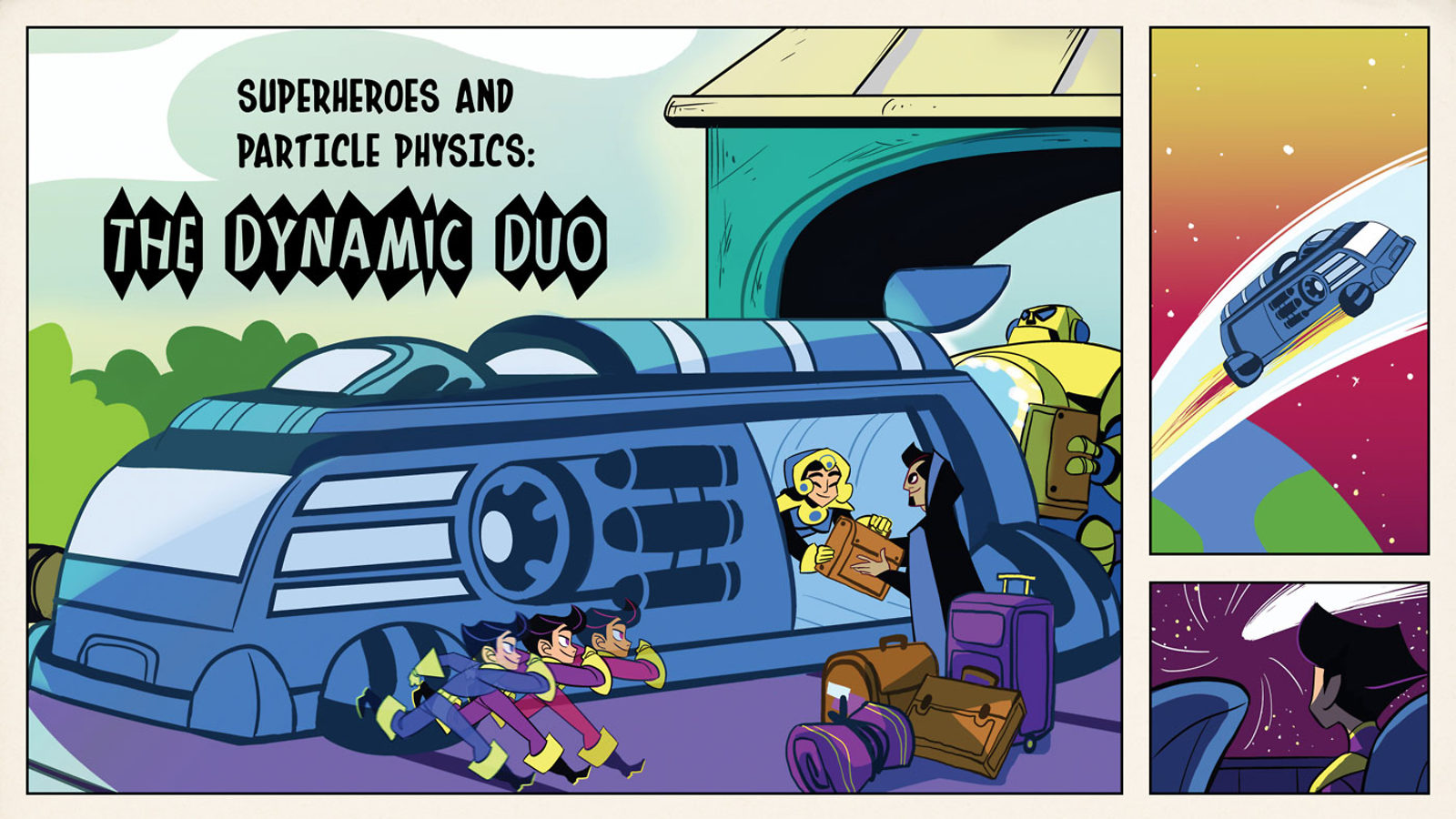 Iron Man 2, the second installment in the Iron Man movie franchise, finds the hero Tony Stark in a bit of a pickle: The “arc reactor” in Stark’s chest (which generates magnetic fields to halt the movement of shrapnel in his body) is powered by palladium, which is slowly poisoning him. Stark must find a different material to run the reactor if he hopes to survive. But the only non-toxic element that will work is one that does not exist on Earth. A brilliant engineer and scientist, Stark builds a small cyclotron and uses it to create the new element he needs.

In the magic world of movies, Stark builds his cyclotron in about a day, whereas real cyclotrons usually take months or years to come together. But the story is built on at least one scientifically accurate fact: It is true that particle accelerators can be used to create “new” elements—those that aren’t found in nature. It’s a wonder Stark didn’t just put on his Iron Man suit and fly to Lawrence Livermore National Laboratory, where scientists have already been involved in the creation of new elements 113, 114, 115, 116, 117 and 118.

Throughout the comic book canon, sprinkled amongst fictional science like Tony Stark’s in vivo arc reactor, one can also find examples of genuine particle physics. Talking to comic book writers reveals that particle physics is frequently an inspiration for new and interesting storylines—and the presence of particle physics in superhero comics and movies fuels curiosity and imagination in its audience. It may surprise some people to find that superheroes and particle physicists inspire each other—but unlikely duos often make great stories. 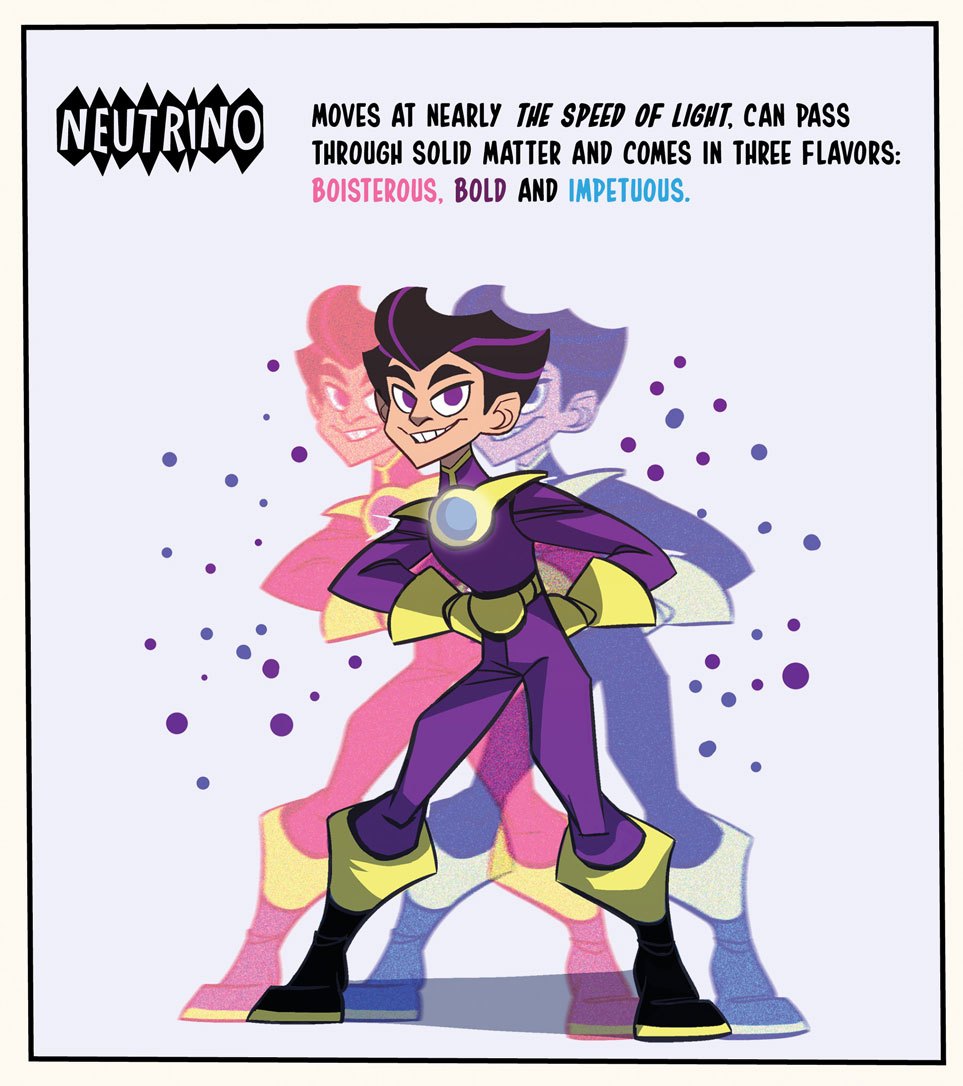 The spark of possibility

Comic book writer and self-described “science junkie” Mark Waid authored many issues of the comic book series JLA—a modern reboot of the Justice League of America, which places more than a dozen DC superheroes onto the same crime-fighting team.

In 1997, Waid read about an experiment at the University of Geneva, where physicists were testing quantum entanglement: a phenomenon wherein two particles, theoretically separated by any distance, share a mysterious connection. The Swiss physicists split a single photon into two entangled photons, separated them by 10.9 kilometers, and showed that a change to one photon caused a nearly instantaneous change to the other. This “spooky action at a distance” was first conceptualized in the 1930s, but no experiment had ever demonstrated it over such a long expanse.

Waid was intrigued by the counter-intuitiveness of entanglement and the confounding world of quantum mechanics, which reveals that the physical properties of subatomic particles, including their location, exist as probabilities and not as definitive values. The concept inspired a JLA storyline: Issues 17 and 18 of the comic portray the heroes dealing with a series of highly improbable occurrences. They eventually deduce that a group of seven photons, split in an entanglement experiment, have altered the probabilities that govern the universe.

To finally solve the problem, the JLAers call on the veteran DC hero The Atom, who can shrink himself and the other team members down to sub-atomic size and repair the split photons.

Waid, who minored in physics in college, says he frequently looks to science—and particle physics in particular—for inspiration.

“I think that the more science you can inject into a story about superheroes, the more real it feels, the more verisimilitude it has—which I think is very important for readers who want to invest in your characters,” he says.

Like Waid, comic book writer James Asmus, who has authored a number of X-Men comics, frequently uses modern science as inspiration. In 2013, Asmus began writing a reboot of a 1990s comic series called Quantum and Woody, which follows two brothers who get caught in a laboratory explosion and suddenly find themselves with superpowers. To solve the mystery of their newfound abilities, they investigate a mysterious machine that might run on dark matter or energy from another dimension.

“For me, that space where we have exciting new knowledge, and we don’t yet know what the possible outcomes and applications could be—that feels a lot like when I was a kid and I was running around a playground pretending I was a superhero. There's a promise that something incredible might actually be achievable," Asmus says. 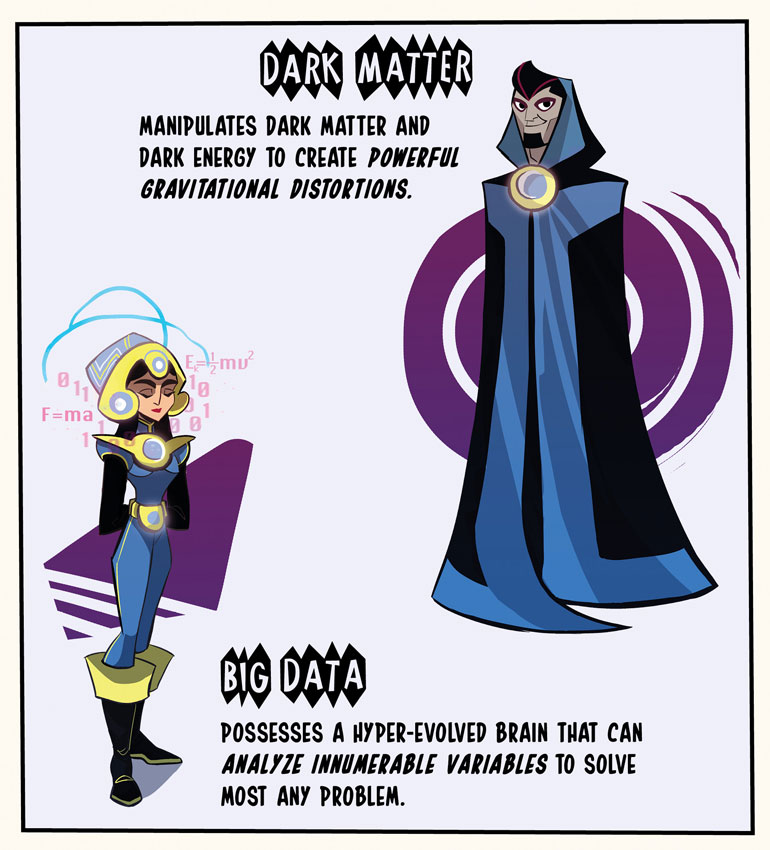 Like Asmus, James Kakalios was probably one of those kids who liked to pretend he was a superhero. A life-long fan of comics, Kakalios is now a professor of physics at the University of Minnesota and the author of The Physics of Superheroes, a book inspired by a class he taught for incoming freshman and non-physics majors. In the book, Kakalios demonstrates that superhero comics can be used to teach physics.

Take, for example, Kakalios’ lesson on Schrödinger’s equation. This is a notoriously difficult subject, usually explained in terms of dead and not-dead cats. Kakalios takes a different approach and explores the powers of the classic superhero The Flash, who possesses the ability to run at nearly the speed of light.

Over time, The Flash realizes that he can pass through walls when he runs at top speed. Schrödinger’s equation partly explains this phenomenon. Through quantum tunneling, a particle may unexpectedly go from one side of a physical barrier to the other. While the amount of energy needed to accelerate a human body to nearly the speed of light would be tremendous, it is true that the increase in kinetic energy would increase the probability of The Flash experiencing a quantum tunneling event and passing through a wall.

Kakalios has said that superpowers are almost always impossible, but what a character does with those powers often adheres to the laws of physics, like The Flash passing through walls, or running on water, or catching a bullet in midair—all of which would be physically possible if he could move at immense speeds. Kakalios follows up by telling his students about the many amazing things physicists can do with this fundamental knowledge—for example, quantum tunneling is used in touch-screen technologies and is the basis for scanning tunneling microscopes. The stories act as bait to get students to pay attention to tough physics lessons, but they also demonstrate the truly fantastic power of real physics. 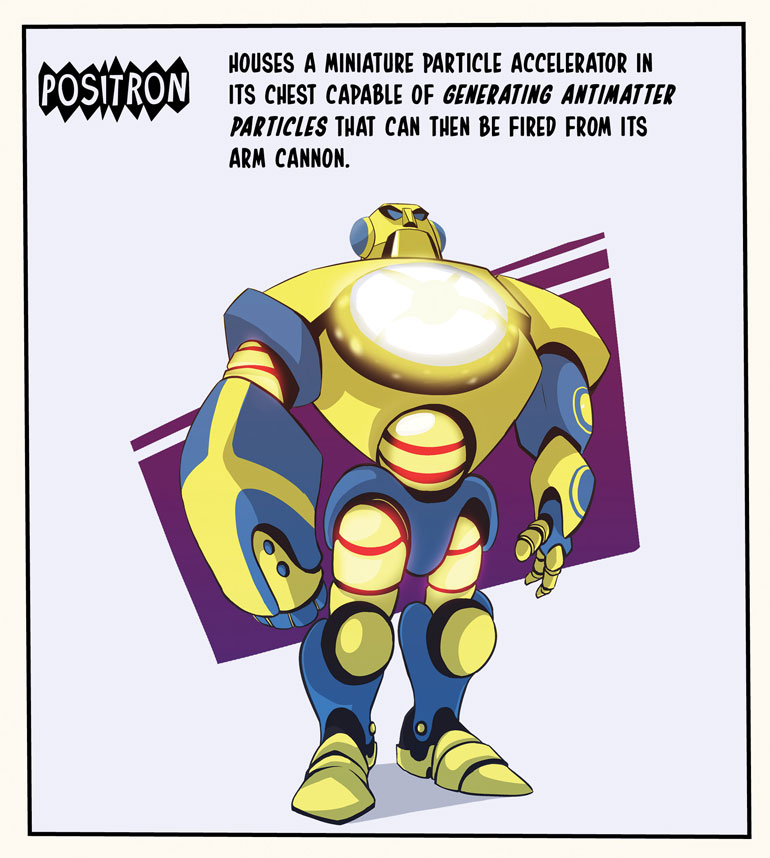 Comic book superheroes can hook the most reluctant physics students—or inspire those with a penchant for science. Brian Nord is a post-doctoral researcher on the Dark Energy Survey at Fermilab and a long-time comic book fan. He says that, as a kid, he was always drawn to comics that featured scientist heroes, and that comic books fueled his curiosity about the universe.

“I think as we go through cycles in our growth as people, we have different needs. So sometimes we have a need to sit down and get things done, and move forward with what we have learned and what other people have learned,” Nord says. “But before that, you need to dream. You have to find or create your own inspiration. We’re inspired by dreaming about what we can do in the future and dreaming the impossible. It’s sort of a simple jump to say that seeing people in comic books do amazing things that you didn’t think were possible is a great way to subconsciously be inspired.”

It’s not such a far stretch to assume that most kids who like superheroes will also like science. At a fundamental level, scientists are like superheroes—armed with an ever-growing knowledge about the most fundamental components and laws of our universe. Like a superpower, that knowledge is exciting by itself. But solving problems requires the clever application of that knowledge. So The Flash learns how to pass through walls, while particle physicists find new ways to treat cancer and monitor nuclear waste proliferation, develop new drugs and improve the world’s computing capabilities; all while fighting to understand the ultimate nature of reality. Both superheroes and scientists ask the world to reconsider what is possible.

“Science and comic books are all about ‘what ifs,” Nord says. “What if we could do this now, or what if this were the future, or what if in another distant solar system there are people wearing spandex, running around and trying to fight an evil that we’ve never heard of? What if?” 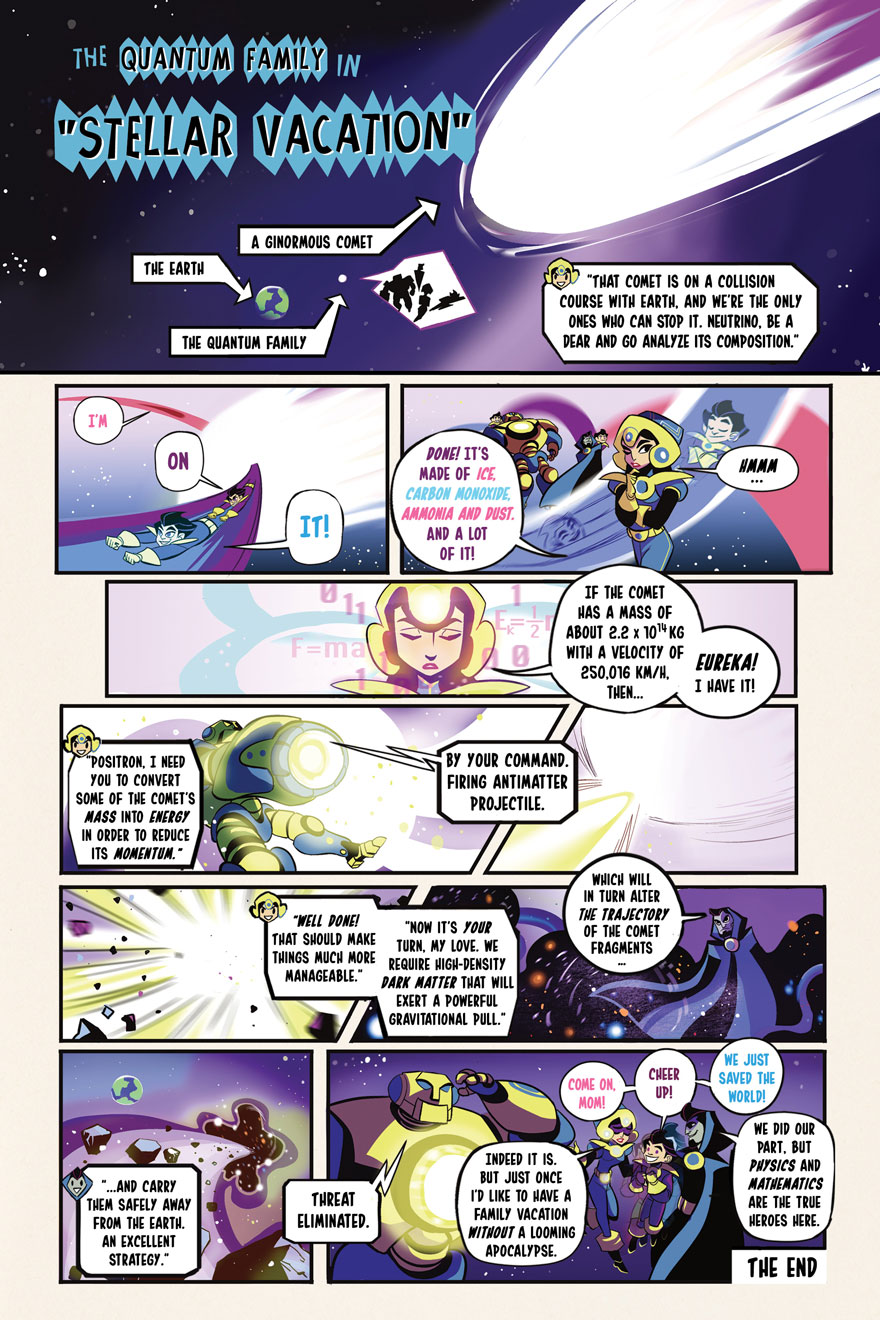 For this article honoring the connection between physics and superheroes, symmetry brought in comic author Josh Elder and comic artist Brittney Williams to create a cast of original characters with physics-related powers. Elder writes for DC Comics; founded the visual literacy non-profit Reading with Pictures; and co-created the comic strip and graphic novel series Mail Order Ninja. Williams trained with Walt Disney Studios and is now a freelance comic artist and illustrator who has done work for the comic Samurai Jack.