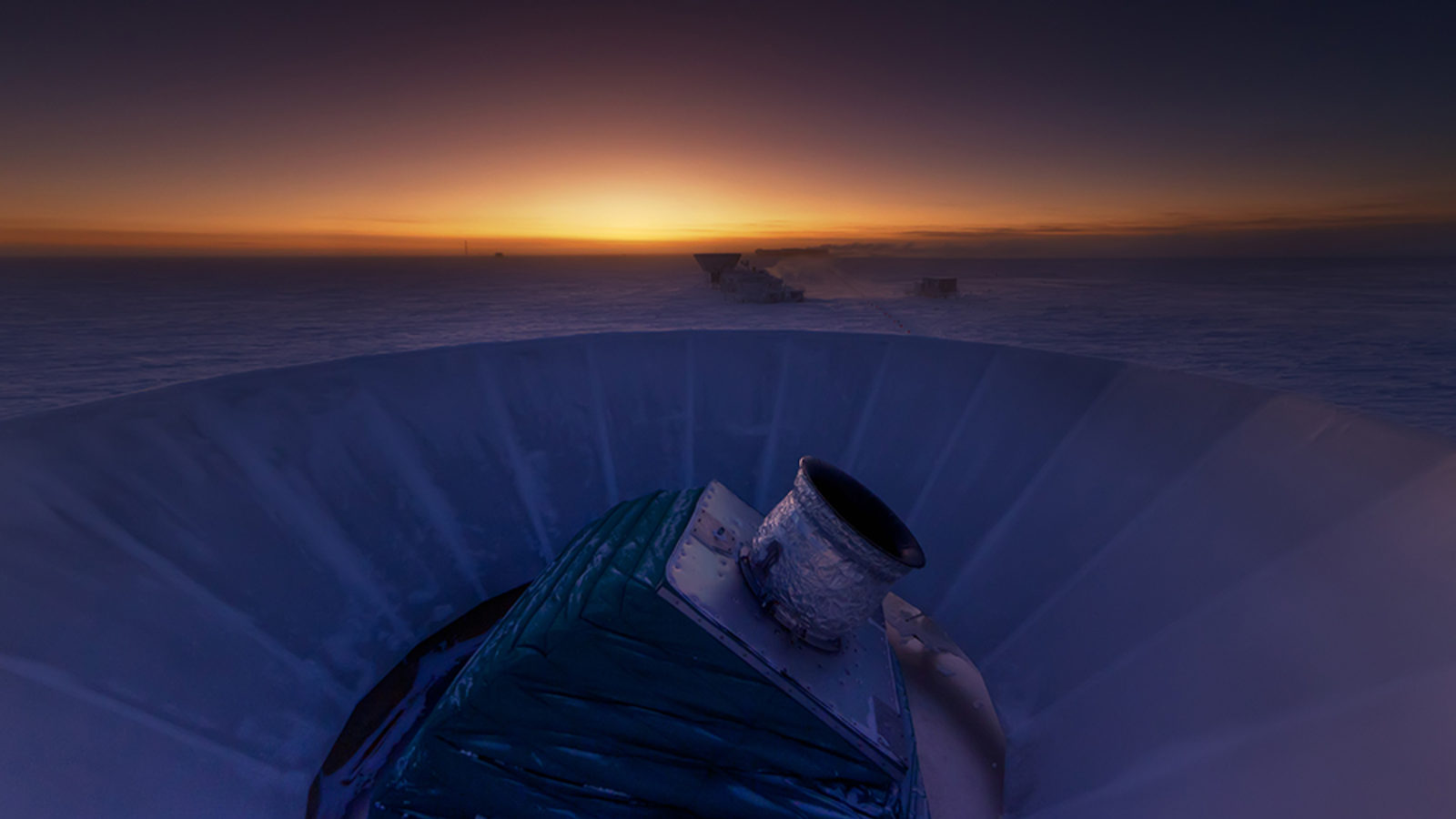 Almost 14 billion years ago, the universe we inhabit burst into existence in an extraordinary event that initiated the big bang. In the first fleeting fraction of a second, the universe expanded exponentially, stretching far beyond the view of today's best telescopes. All this, of course, has just been theory.

Researchers from the BICEP2 collaboration today announced the first direct evidence supporting this theory, known as "cosmic inflation." Their data also represent the first images of gravitational waves, or ripples in space-time. These waves have been described as the "first tremors of the big bang." Finally, the data confirm a deep connection between quantum mechanics and general relativity.

"This is really exciting. We have made the first direct image of gravitational waves, or ripples in space-time across the primordial sky, and verified a theory about the creation of the whole universe," says Chao-Lin Kuo, an assistant professor of physics at Stanford and SLAC National Accelerator Laboratory, and a co-leader of the BICEP2 collaboration.

These groundbreaking results came from observations by the BICEP2 telescope of the cosmic microwave background—a faint glow left over from the big bang. Tiny fluctuations in this afterglow provide clues to conditions in the early universe. For example, small differences in temperature across the sky show where parts of the universe were denser, eventually condensing into galaxies and galactic clusters.

"Our team hunted for a special type of polarization called 'B-modes,' which represents a twisting or 'curl' pattern in the polarized orientations of the ancient light," says BICEP2 co-leader Jamie Bock, a professor of physics at Caltech and NASA's Jet Propulsion Laboratory.

Gravitational waves squeeze space as they travel, and this squeezing produces a distinct pattern in the cosmic microwave background. Gravitational waves have a "handedness," much like light waves, and can have left- and right-handed polarizations.

"The swirly B-mode pattern is a unique signature of gravitational waves because of their handedness," Kuo says.

The team examined spatial scales on the sky spanning about 1 to 5 degrees (two to 10 times the width of the full moon). To do this, they set up an experiment at the South Pole to take advantage of its cold, dry, stable air, which allows for crisp detection of faint cosmic light.

"The South Pole is the closest you can get to space and still be on the ground," says BICEP2 co-principal investigator John Kovac, an associate professor of astronomy and physics at Harvard-Smithsonian Center for Astrophysics, who led the deployment and science operation of the project. "It's one of the driest and clearest locations on Earth, perfect for observing the faint microwaves from the big bang."

The researchers were surprised to detect a B-mode polarization signal considerably stronger than many cosmologists expected. The team analyzed their data for more than three years in an effort to rule out any errors. They also considered whether dust in our galaxy could produce the observed pattern, but the data suggest this is highly unlikely.

"This has been like looking for a needle in a haystack, but instead we found a crowbar," says co-leader Clem Pryke, an associate professor of physics and astronomy at the University of Minnesota.

Physicist Alan Guth formally proposed inflationary theory in 1980, when he was a postdoctoral scholar at SLAC, as a modification of conventional big bang theory. Instead of the universe beginning as a rapidly expanding fireball, Guth theorized that the universe inflated extremely rapidly from a tiny piece of space and became exponentially larger in a fraction of a second. This idea immediately attracted lots of attention because it could provide a unique solution to many difficult problems of the standard big bang theory.

However, as Guth, who is now a professor of physics at MIT, immediately realized, certain predictions in his scenario contradicted observational data. In the early 1980s, Russian physicist Andrei Linde modified the model into a concept called "new inflation" and again to "eternal chaotic inflation," both of which generated predictions that closely matched actual observations of the sky.

Linde, now a professor of physics at Stanford, could not hide his excitement about the news. "These results are a smoking gun for inflation, because alternative theories do not predict such a signal," he says. "This is something I have been hoping to see for 30 years."

In 1978 Alan Guth heard about the “flatness problem” of the universe while attending a talk on cosmology—a field he was only marginally curious about.

The big-bang theory of the early universe implies that the universe is immersed in a bath of microwave light, a cooled-down remnant of early high-temperature radiation, invisible to the naked eye.

The growth of inflation

Twenty-five years after Alan Guth turned cosmology on its head, what’s the latest story of the universe’s first moments?