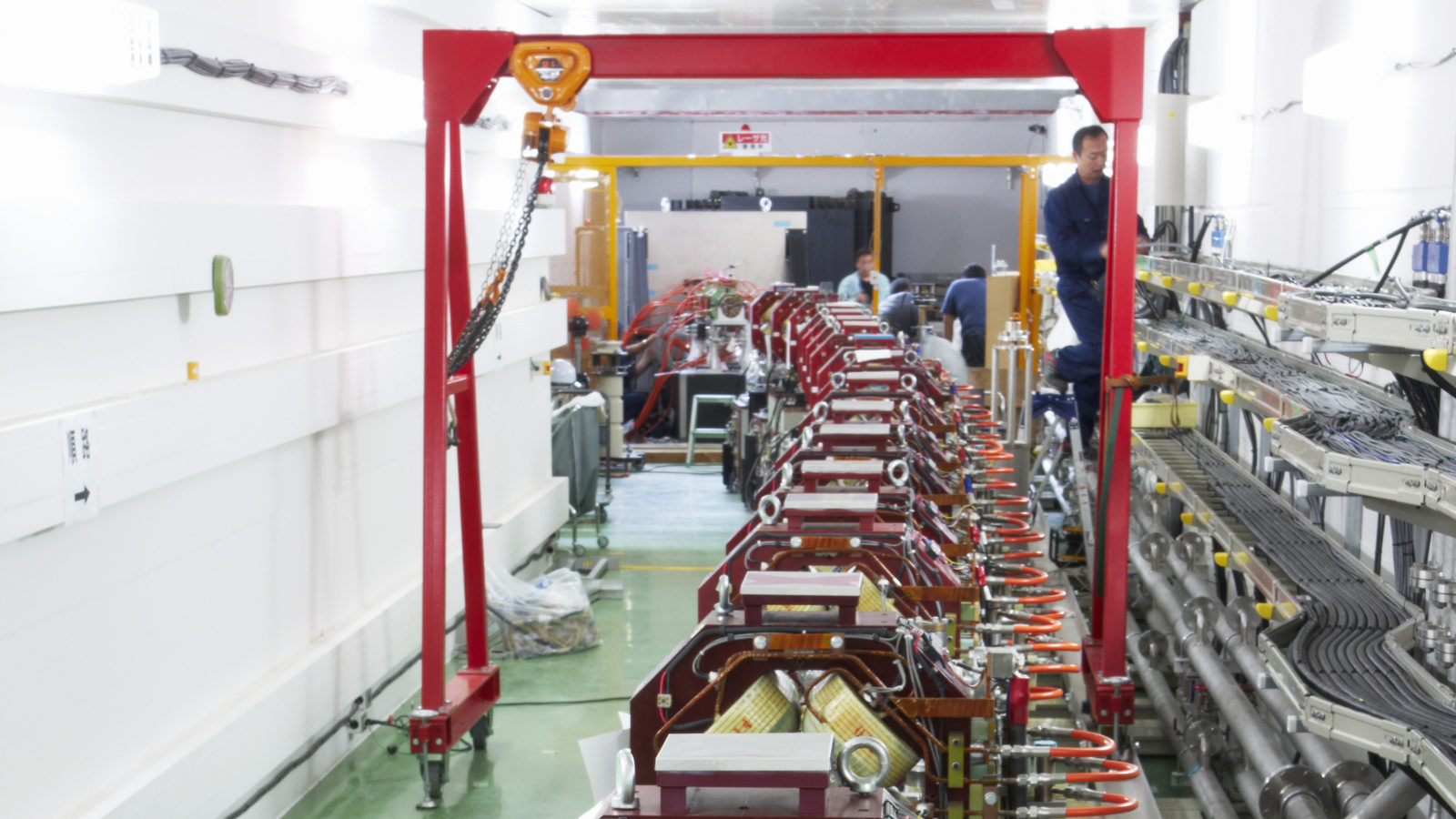 Linear collider focus gets down to size

In a display of timing worthy of a blockbuster movie, a multinational team of accelerator physicists focused a beam of electrons down to the tiny size needed for a future linear collider the same week that the linear collider board formed.

In late 2012, Toshiaki Tauchi clicked the send button on an email with the subject line “70nm achieved at ATF2!” It signaled a major success for Tauchi, an accelerator physicist at KEK, and his colleagues at the Japanese lab’s Accelerator Test Facility 2: They had shown they could focus a beam of electrons down to the tiny size required by a future linear collider.

Tauchi is a member of the executive committee overseeing the global design effort for the International Linear Collider, and the timing of his announcement could not have been better.

Just the day before, Fermilab Director Pier Oddone, in his role as chair of the International Committee for Future Accelerators, announced the formation of a Linear Collider Board to shepherd the global effort to build a linear collider capable of pushing back the frontiers of high-energy physics revealed by the Large Hadron Collider at CERN. With Japan expressing interest in hosting such a facility and the even more recent formation of a Linear Collider Collaboration to coordinate and advance global plans, momentum seems to be building for the construction of the giant electron-positron collider.

Coaxing particle beams to a tight, accurate focus is vital for any collider, says Glen White, an accelerator physicist from SLAC National Accelerator Laboratory who has been racking up frequent flier miles to Japan since late 2008 to work at ATF2. The test facility contains a prototype of an advanced optics design intended for use at the ILC, and researchers have been using it to squeeze down the electrons in the beam into tighter bunches. Packing electrons into smaller bunches helps maximize particle collisions, and maximizing collisions—along with maximizing the energy of the colliding particles—maximizes the science. That relationship holds for all colliders.

“We are very dependent upon novel beam focusing schemes, such as the one we use at ATF2, to get the very small beam spot sizes required to deliver the promised physics,” White says. “This means ATF2 is a prototype of the final focus for any future linear collider,” and not just for the ILC in its current design incarnation as captured by the Technical Design Review, also completed last December.

In addition to prototyping the optics for focusing the beam, the ATF2 team needed diagnostic instruments capable of telling them whether or not the optics were working correctly. “Old diagnostic instruments aren’t much good tracking beams smaller than a micrometer in size,” White says. So the team assembled a whole new suite of instruments, including making significant improvements to a beam size monitor that made its debut at the Final Focus Test Beam, the ATF2’s precursor, at SLAC. Called the interaction point beam size monitor, this equipment uses laser interferometry to measure the diameter of the beam at its most important location: the interaction point where particle bunches collide.

But an accelerator is more than its components, and the ATF2 needed to prototype more than the optics to focus the beams and the diagnostic instruments to track them. Two stated goals of the ATF2 project were to prototype the operation of a complex accelerator in an international setting and to educate the next generation of accelerator physicists and operators—whatever their country of origin. “The facility is an international test facility for linear colliders and instrumentation,” says White. “It’s a big global community”—another requirement for any future linear collider.

ATF2 met those goals, says White, thanks to a final eight-week push to reach the 70-nanometer spot size. The extra time spent learning the accelerator’s idiosyncrasies proved vital, especially when an elusive problem with the accelerator blocked further progress near the end of commissioning.

“We shut down the beam at about 10 p.m. and we basically tore the machine apart,” White says. From the most senior physicist to the youngest student, “Everyone grabbed a wrench and headed for the accelerator. By three in the morning we had the whole machine laid out on the floor.” He smiles.

“That was a great bit of international collaboration,” he says, and one that paid off handsomely. The problem-solvers used what they’d learned in the previous several weeks to rebuild the machine, swapping around parts and testing the resulting electromagnetic fields. When they fired the beam up, lo and behold, the beam stabilized.

But achieving the small beam size is just the start. “It’s a two-stage program here,” White says. “First we make the small beam size and then we maintain it. In the next few years we’ll learn a lot of valuable information about how the ILC will perform.”

Japan's high-energy physics laboratory KEK is undergoing a transition as it expands its science program with upgraded and new facilities.