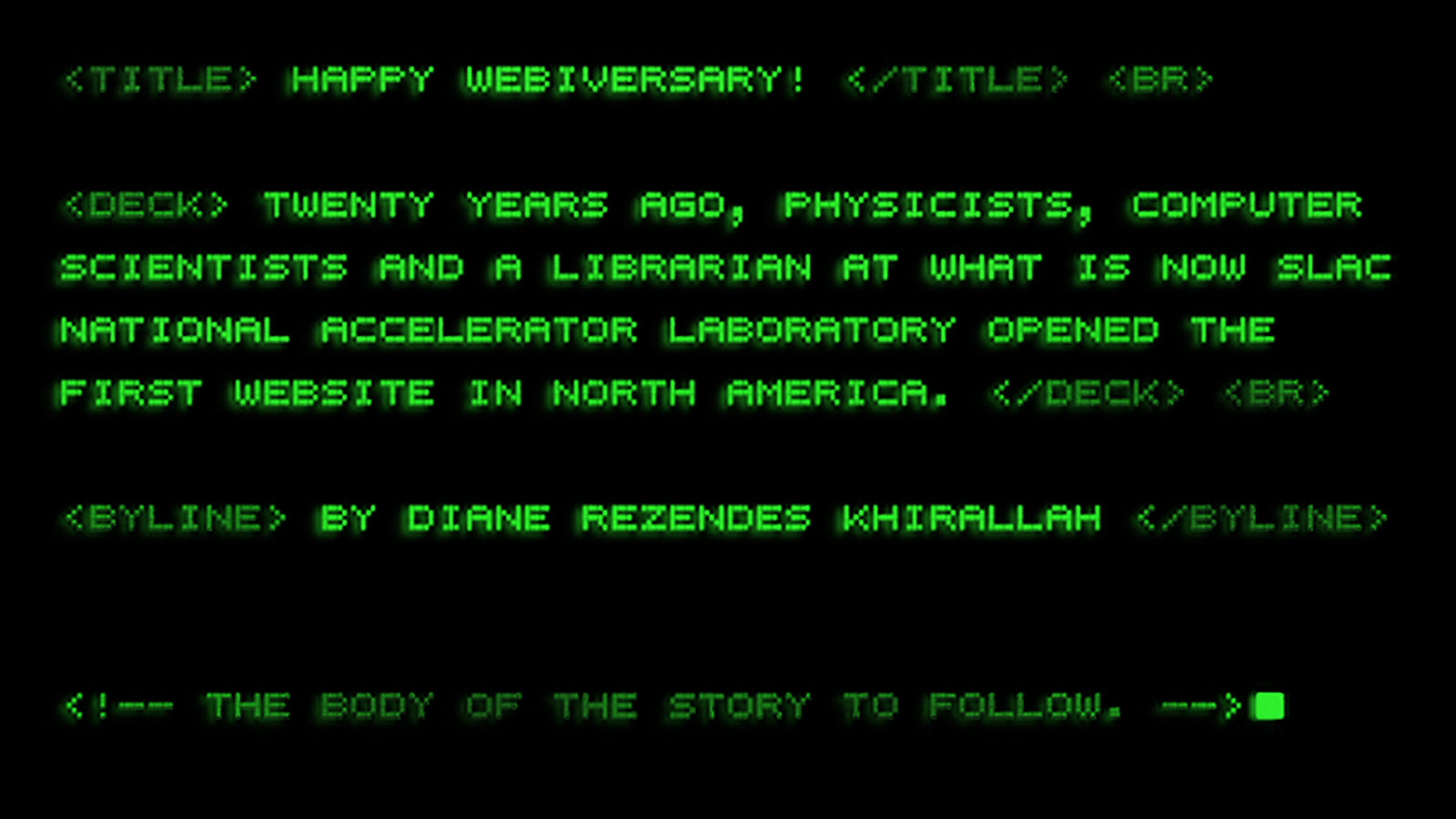 On December 12, 1991, the first Web server in North America went into operation. It didn’t come from a blue-chip tech company like IBM or a hungry upstart like Microsoft. It came from what is now SLAC National Accelerator Laboratory, whose mission was high-energy physics, not computer science. The server, inspired by an idea developed at the European particle physics center CERN, provided users remote access to SPIRES, the Stanford Public Information Retrieval System database, a collection listing some 200,000 preprints of scientific papers.

In trying to solve one specific and vexing problem—how to share information among colleagues effectively and rapidly—a SLAC librarian and a small group of physicists and computer experts helped launch a medium whose impact may, in retrospect, usurp that of television and telephone.

To understand why the World Wide Web took off so quickly at CERN, SLAC, Fermi National Accelerator Laboratory and other high-energy physics centers and then caught fire everywhere else, it helps to take an inside look at the world of the scientists who first used it. In a community that’s as small as it is distinct, physicists from widely scattered labs and universities worked on the same problems, and in many cases collaborated across long distances. Then as now, they needed to keep up with the results of their peers’ research if they were to move forward in their own.

For decades, physicists shared preprints, pre-publication versions of their results, through the mail. Then the Department of Defense created ARPANET, the Advanced Research Projects Agency Network, to link academic institutions and research centers. In 1983, this network split into two branches, one for military and one for civilian use. Twelve years later, the civilian branch was officially renamed the Internet, an international network of computers connected by the same communications protocol.

Although its underlying protocols and principles are fundamentally unchanged, the early Internet looked little like it does today. There were no images or graphics, and, most importantly, no easy way to share files electronically.

With the Internet alone, “all you could do was search the (SPIRES) database” of physics preprints, says now-retired SLAC physicist Paul Kunz, who is credited with creating the first North American website, a mere three lines of code (writing and sending a Tweet involves more). “You’d find the reference to the paper, and then go look it up in the journal or request a preprint, which would come to you in the mail.” You could send email to a colleague discussing new data you’d found, but you could not attach a document detailing that data.

Doing even that much required a multi-step effort, recalls SLAC’s Les Cottrell, then assistant director of computing at the lab. “It was very manually intensive,” he says. Each search required assistance from a SLAC librarian, as well as having to enter commands using ASCII text, which is anything but an intuitive process.

Meanwhile at CERN, a new idea was brewing: a way to use the Internet backbone to connect a system of hyperlinked documents. In 1990, physicist Tim Berners-Lee found a way to do this, creating the first website using a NeXT computer.

SLAC’s Kunz visited CERN in September 1991, where he heard about the idea from Berners-Lee. His initial reaction? “I wasn’t really interested,” he says. But then—it was a Friday the 13th, Kunz recalls. “Tim dragged me into his office to show me a demo of the Web.” His lack of interest reversed itself; he immediately saw the possibilities as Berners-Lee showed him the query interface, a screen from which the user could call up documents from CERN’s mainframe computer. If Berners-Lee could do that, Kunz realized he could do the same with the SPIRES database, which resided on the SLAC mainframe computer. “That’s when the whole thing sparked,” Kunz says. “That’s when my eyes opened up.”

When he got back to SLAC’s Menlo Park campus, he got to work creating a server: a computer that stores information and makes it available over the Internet. Later, in a 2000 interview with First Monday, SLAC Librarian Louise Addis remembered the day Kunz showed up in her office: “He showed me the Web and we started moving right away.” Building on the foundation laid by Addis and computer scientist George Crane, Kunz says he built an interface that made it possible for the new Web server to get the same information from the database, but far more easily.

On December 12, Kunz got in touch with Berners-Lee and asked him to give the new SLAC Web server a try. Berners-Lee responded immediately. Kunz still has the email, which reads in part: “Good job! Congratulations to all involved. It seems to work well.” Then Berners-Lee started critiquing the SLAC setup, Kunz says, offering constructive ideas for further improvements.

Armed with those ideas and some of their own, a small ad hoc group within SLAC calling itself the World Wide Wizards began developing the Web further, doing much of the work on their own time. One of them, software developer Bebo White, says that in the earliest days, some “people were a little suspicious that it was just another neat little tool—and that next month, there’ll be another one.” The Wizards saw it differently: in fact, they were already calling it a killer app for its ability to send and receive documents. Not one of them had any idea the Web would become as ubiquitous or dominant as it has.

Another Wizard, staff scientist Tony Johnson, visiting from Boston University at the time, took on the task of linking SPIRES to other databases, including Los Alamos National Laboratory and its electronic documents archive.

Kunz, Johnson, and Cottrell say the nascent Web got a big boost at a January 1992 conference in southern France, where Berners-Lee gave his first talk outside CERN about the Web. Two hundred physicists from 150 labs around the world were there, Johnson and Kunz among them.

Then Berners-Lee surprised Kunz, Johnson, and everyone else in the room with a demo connecting to the SPIRES database using the SLAC server. “The 20 interested people became 200,” Kunz says. “It was a big turning point for the Web.”

CERN made the underlying source code available to anyone who wanted it, and “made it incredibly easy for anyone to set up a Web server, or to start developing their own browser,” Johnson says. The concepts underlying the Web had been developed several times before, he says, but this time they came from an open, university environment, and “that openness, plus good timing, is what enabled the Web to take off.”

When Addis gave SLAC’s 5000 registered SPIRES users the news, they were quick to adopt this new way of sharing research results. The Web began to go viral within the worldwide physics community, as scientists saw how easy it was to access SPIRES from their own labs and universities. Even CERN physicists, who had their own local server, were frequent SPIRES users, Kunz recalls.

From there, things evolved quickly. Within a few months, Fermilab and the Massachusetts Institute of Technology added their own websites (at the time, there were only three in the US and 26 worldwide). Other institutions soon followed.

At Fermilab, the advent of the Web had a major impact on another field: astrophysics. The lab has played a key role in the Sloan Digital Sky Survey, which in 2000 began making three-dimensional maps of more than a quarter of the sky based on deep, multi-colored images.

“It was Fermilab’s first astrophysics project, and we were working with Princeton,” says Ruth Pordes, a Sloan Digital Sky Survey Builder in the lab’s computing division. In the 1990s, long before the sky mapping began, she says, “we were writing documents and specs and code. People were used to holding these things close to their chests, but by using the Web we were able to open it up. It helped move the culture toward collaboration.”

Some might consider Tony Johnson scarily prescient when he wrote of the Web, in the Fall 1994 issue of Beam Line, “At worst, such a system may just become a glorified video delivery system and integrated home shopping network with a built-in method of tracking your purchases and sending you personalized junk e-mail. At its best, such a system could provide truly interactive capabilities, allowing not only large corporations and publishers but also individuals and communities to publish information and interact through the network, while maintaining individual privacy. The outcome will have a major impact on the quality of life in the 21st century, influencing the way we work, play, shop, and even how we are governed.”

For his part, Kunz is not surprised that a project begun in particle physics came to have such a wide influence. “In doing big science, we’re finding solutions to problems that the general public doesn’t know they have,” he says. “So who would predict that out of high-energy physics research, something like the Web would come up? But in hindsight you can see it’s a natural place for the Web to have been invented.”