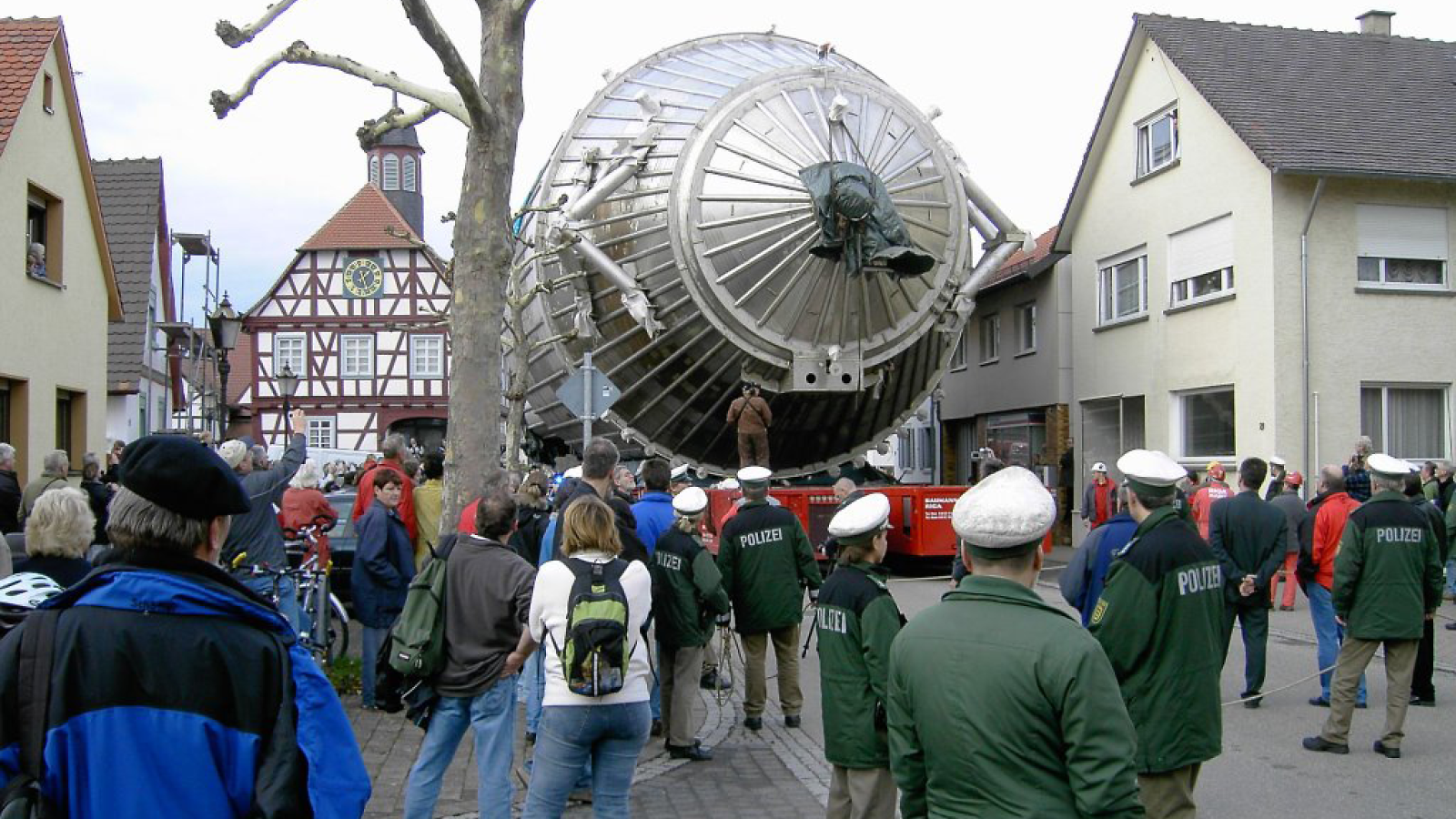 People went to great lengths, traveling almost 9000 kilometers over more than 60 days, to deliver an essential, 200-ton component of the KATRIN neutrino experiment.

In late 2006, a component of the Karlsruhe Tritium Neutrino Experiment (KATRIN) traveled from Deggendorf, Germany, to a laboratory in Karlsruhe, only 400 kilometers away. The trip wouldn’t have been a notable event, except that the spectrometer, an instrument used to measure the masses of particles, followed a near-9000-kilometer route to get from one town to the other. 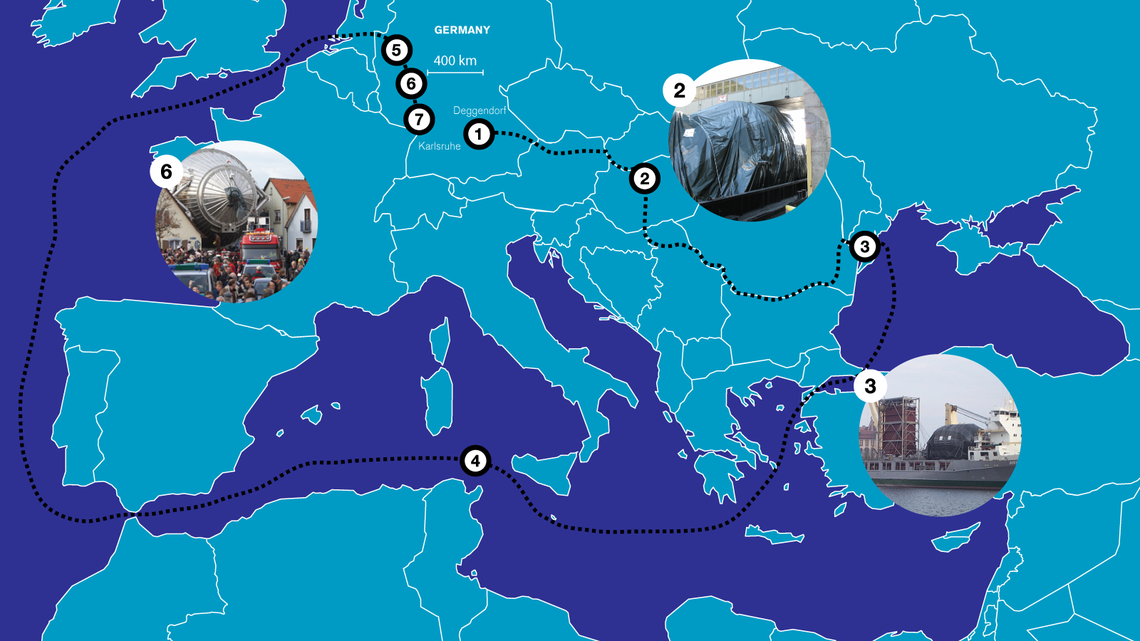 To say it was difficult to move the spectrometer would be an understatement. Measuring almost 10 meters at its widest point and weighing 200 tons, the device was too large and too heavy to be transported along the roads between the two towns. Because the design of the detector called for a half-mile of specialized vacuum-tight welding between sheets of stainless steel, it had to be shipped from the Deggendorf site in one piece.

Starting in 2010, the KATRIN experiment will take on the challenge of directly determining the mass of the neutrino, an elusive particle without electric charge. Because neutrinos cannot be detected directly, KATRIN will look for how much mass is missing when tritium decays, a process known to emit neutrinos. To do this, the experiment will rely on the capabilities of the specially-designed large spectrometer.

As it traversed the course of its European odyssey, a team of a dozen scientists fretted over the spectrometer’s every move. They watched, guided, worried, and then celebrated when, having navigated a carefully choreographed route across water and land, the instrument finally arrived in Karlsruhe after 63 days of travel. 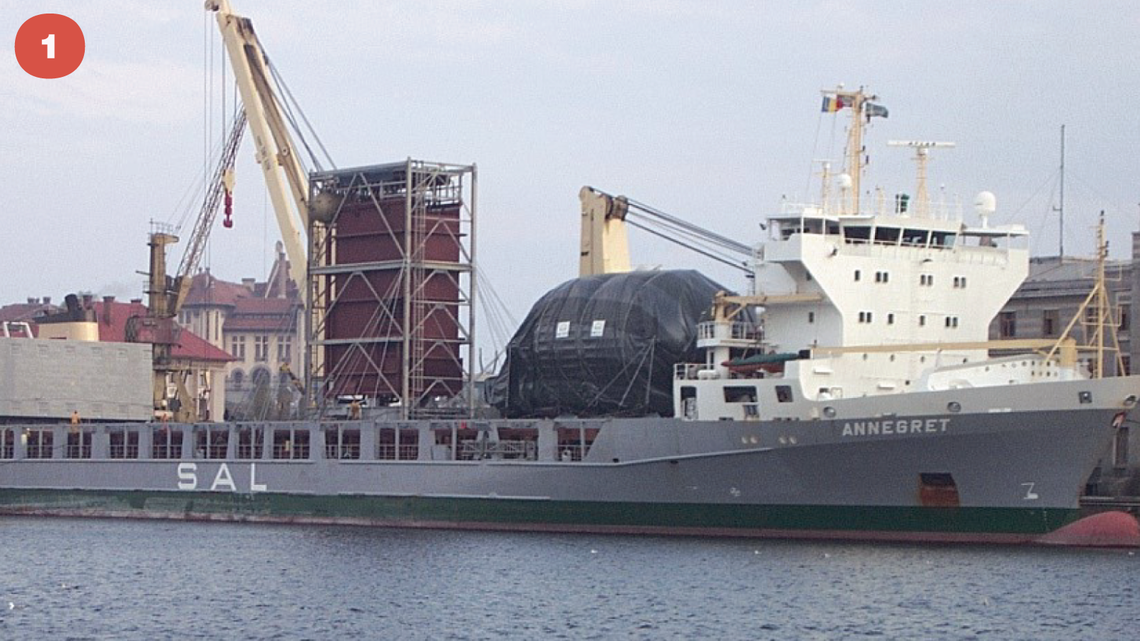 The spectrometer began its journey on the river barge “Taifun,” shoving off from Deggendorf along the Danube. 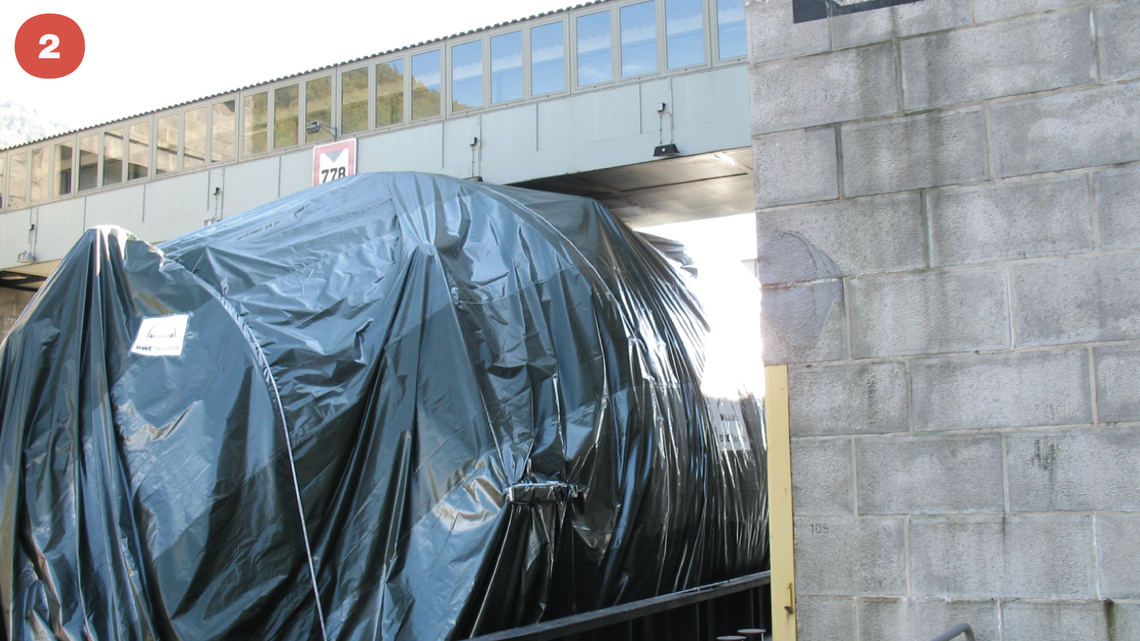 With only seven centimeters to spare, the spectrometer barely slipped under a bridge at the Jochenstein lock in Austria. The barge continued its trip along the Danube through Hungary, Croatia, Serbia, and to the river delta on the Romanian coast without incident. 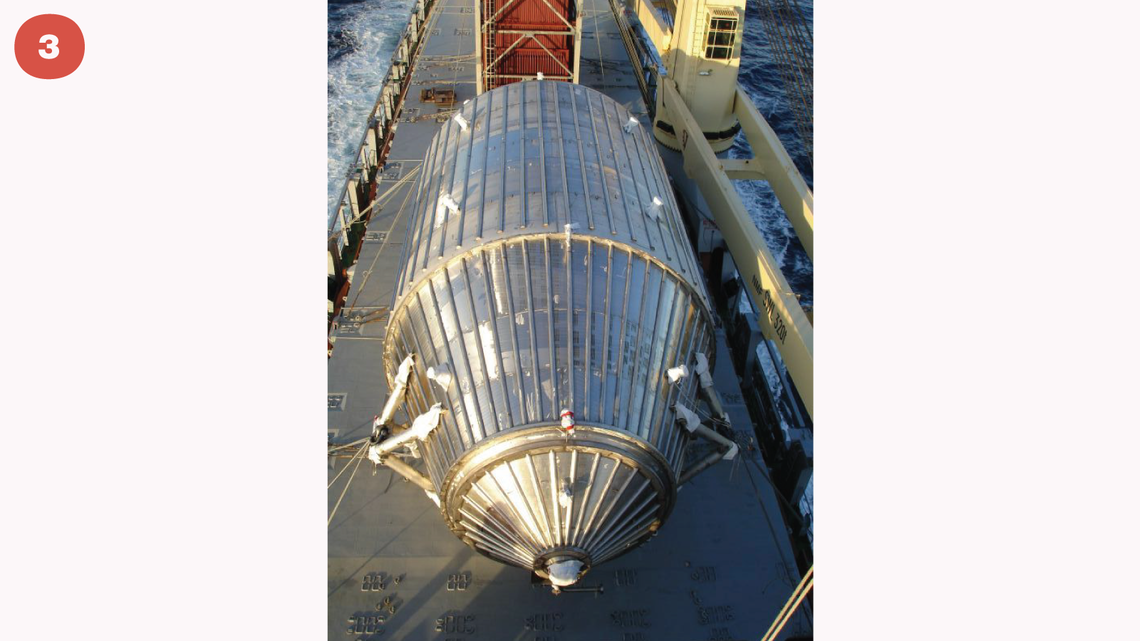 After transferring to the sea-going ship Annegret at the Danube Delta in mid-October, the spectrometer left the port of Constanta for the Black Sea. 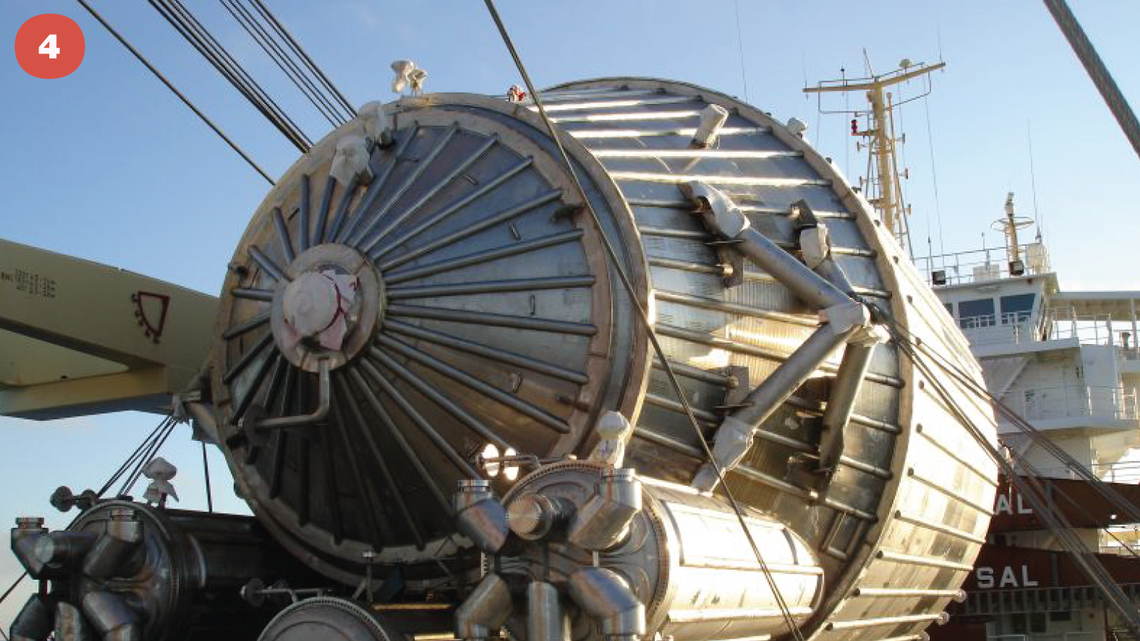 The spectrometer was exposed after a storm tore away the instrument’s half-ton plastic cover—the trip’s only hiccup. Here, at the port of Augusta in Sicily, the instrument was transferred to the Svenja, which carried it around Spain and France to the estuary of the Rhine. 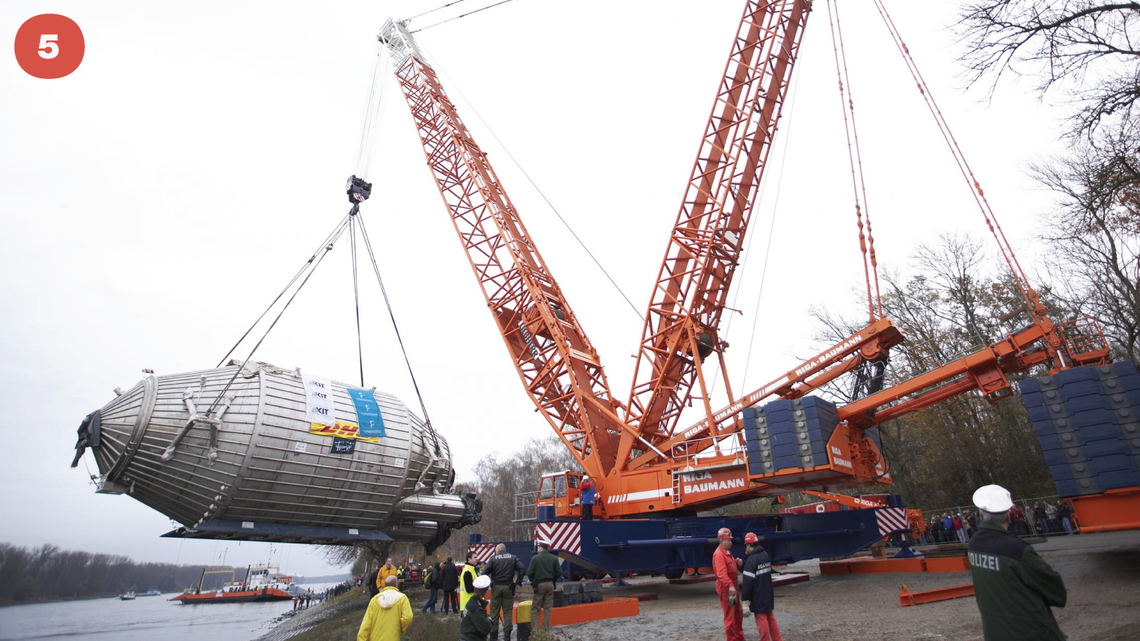 On the Rhine, the spectrometer was transferred to a pontoon boat for unloading at the village of Leopoldshafen. A heavy crane, one of two in all of Europe large enough for the task, lifted the spectrometer from the boat to a vehicle waiting at the dock. 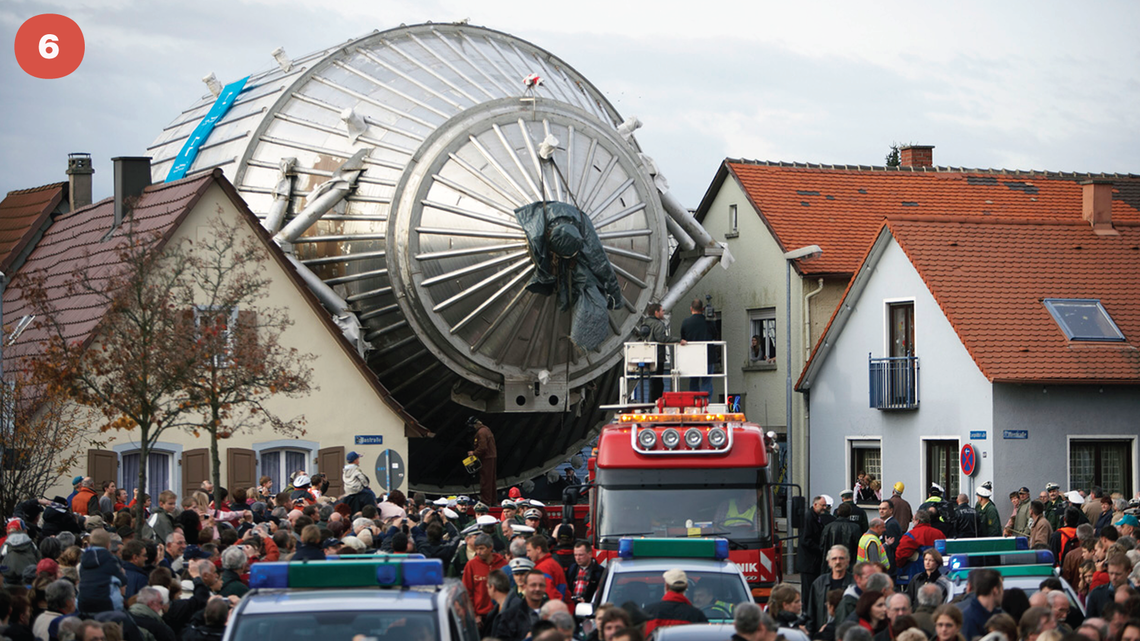 Perched on a large carrier vehicle, the spectrometer, like a displaced spaceship wedged between homes, made its way to the Karlsruhe Research Center through Leopoldshafen. 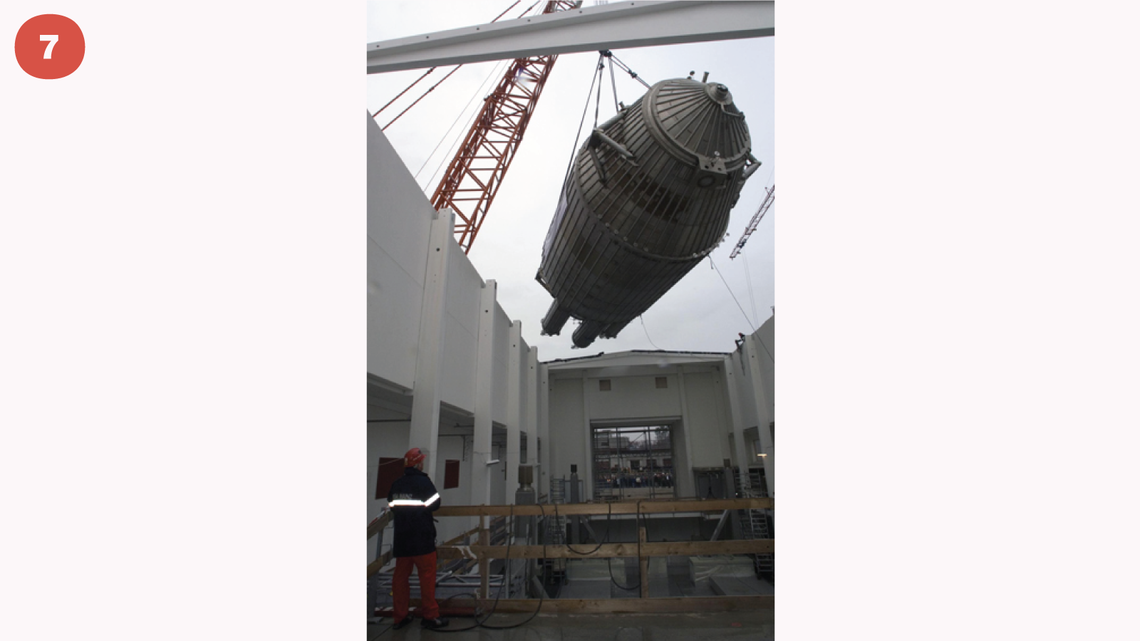 The crane, reassembled at the research center, lifted the instrument to its final position through an open roof, bringing the spectrometer’s journey to an end.