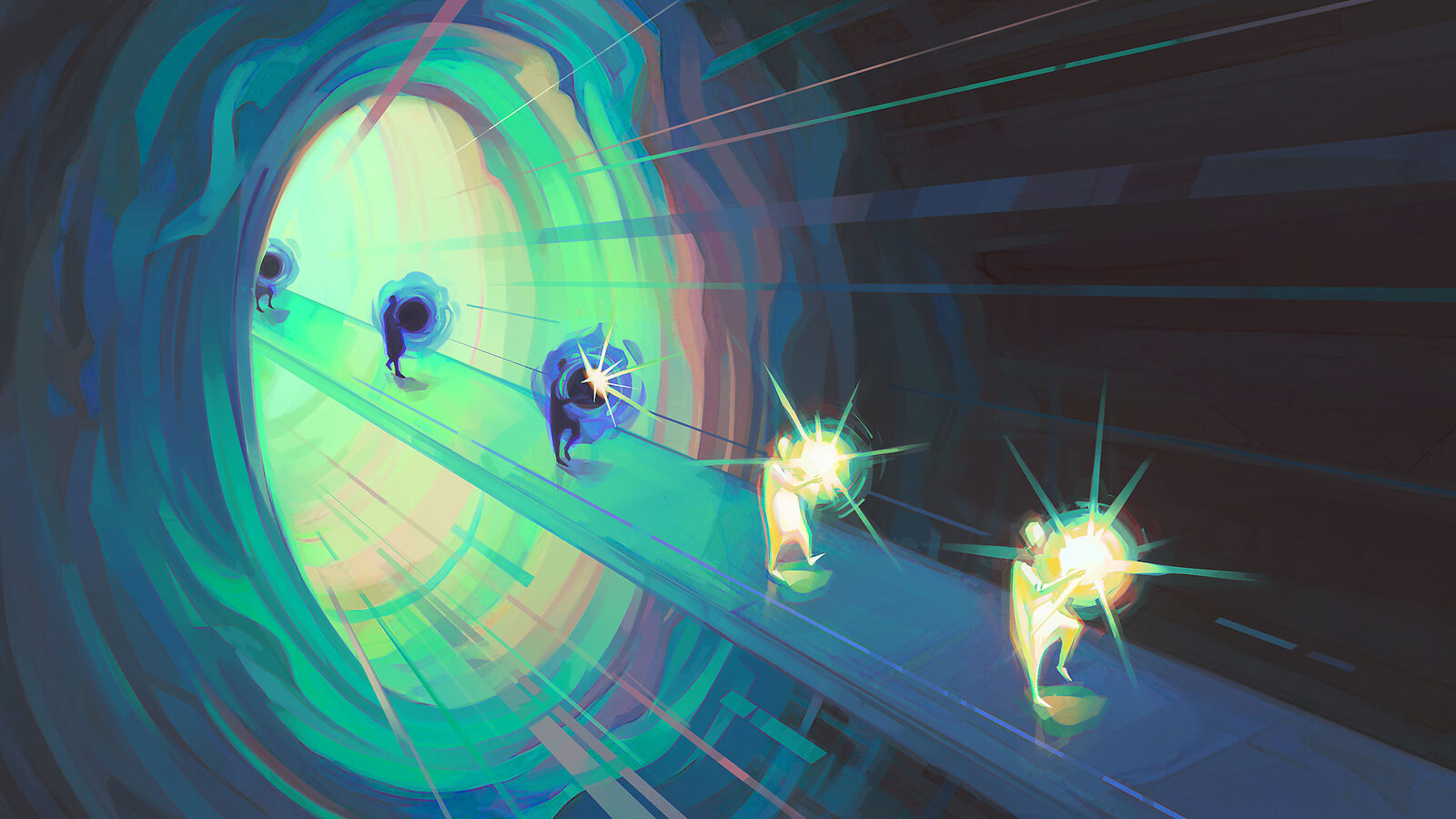 Researching subatomic particles is an involved process. It can take hundreds—if not thousands—of scientists and engineers to build an experiment, keep it up and running, and analyze the enormous amounts of data it collects. That means physicists are always on the lookout for ways to do more for free: to squeeze out as much physics as possible with the machinery that already exists. And that’s exactly what a handful of physicists have set out to do with the LHCb experiment at CERN.

The LHCb detector was originally designed to study a particle known as the beauty quark. “But as time has gone on, people have seen just how much more we can do with the detector,” says Daniel Johnson, an LHCb collaborator based at MIT.

Johnson, along with a team of around 10 researchers from MIT, the University of Cincinnati and CERN, are leading LHCb’s search for dark matter, a hypothesized type of matter that, so far, has evaded detection.

“It’s got to be there because of the way that galaxies dance, but we just don’t have a particle to explain it.”

“Dark matter forms this big fraction of matter in the universe,” says Johnson, who won an Ernest Rutherford early career fellowship through the University of Birmingham, where he will move next March, to help spearhead the search. “It’s got to be there because of the way that galaxies dance, but we just don’t have a particle to explain it.”

For decades, scientists have focused efforts on building increasingly larger experiments with improved sensitivity to observe a dark-matter particle interacting with the detector itself. These experiments are often tucked away deep underground to minimize other, more frequent, types of interactions that can mask potential dark-matter signals.

But these direct detection searches have yet to find anything. “And that’s not to say that they’re a failure,” Johnson says. “They’ve been extremely successful so far at telling us what dark matter isn’t.”

It is to say, however, that physicists may need to adopt more creative explanations as to what the elusive particle could be. One idea growing in popularity is that dark matter might not interact directly with ordinary matter at all. Instead, it might be part of a dark sector of particles and forces that exist completely separate from, but parallel to, those that make up the world we experience every day.

Physicists are hopeful that they can access this dark sector through something called a portal, a rare hypothetical process that establishes a connection between ordinary and so-called dark particles. The LHCb team is particularly interested in portal interactions that convert a dark photon into a regular photon, which will then decay into charged particles that can be detected.

Past efforts have ruled out the existence of dark photons with certain properties, but LHCb’s design puts it in a sweet spot to explore dark photons with masses and lifetimes that other experiments, so far, have not been sensitive to. Even better, observing these photons requires no upgrades to LHCb itself, says MIT graduate student Kate Richardson, who works closely with Johnson on the dark-photon search.

That’s not to say scientists haven’t made improvements to the experiment. Richardson, in particular, has been involved in updating the LHCb’s software trigger, an algorithm that makes a snap decision about whether to store or discard any particle activity occurring inside the detector. “We can’t keep everything that happens,” she says.

Though the experiment’s data storage rivals the size of Netflix servers, it holds only a small fraction of the data generated, Richardson says. “So we write code in the trigger to check if particles match certain requirements, like if they came from the same place and have a certain momentum, and keep those interactions to analyze later.”

Previously, the team used LHCb’s dataset to conduct a preliminary dark-photon search that looked for regular photons decaying into muon-antimuon pairs. The software trigger upgrade paves the way for them to search for an additional type of interaction: regular photons that decay into electron-antielectron pairs, which could originate from dark photons with much lighter masses. This new search, which will take place alongside the primary physics analyses of the experiment, will be in the data-taking stage through the end of 2025.

In the scenario that a dark-photon signal is found, further studies—both with the LHCb and other detectors—would need to confirm the result, since the search is the first of its kind to investigate dark photons at the masses and lifetimes that LHCb is sensitive to. In later runs, Richardson says, the software trigger could be reprogrammed to hone in on a more specific interaction signature, based on what mass and lifetime values seem promising after an analysis using the new data.

Both Johnson and Richardson are excited about what information their future results will add to the 89-year-long quest to understand the nature of dark matter. “Someone’s going to find it. Why can’t it be LHCb?” Johnson says.

When it is found, it’s going to turn physics as we know it on its head, he says. “It would be one of the biggest discoveries in the last hundred years. It would completely change the way we view our universe.”