The newly discovered tetraquark provides a unique window into the interactions of the particles that make up atoms. 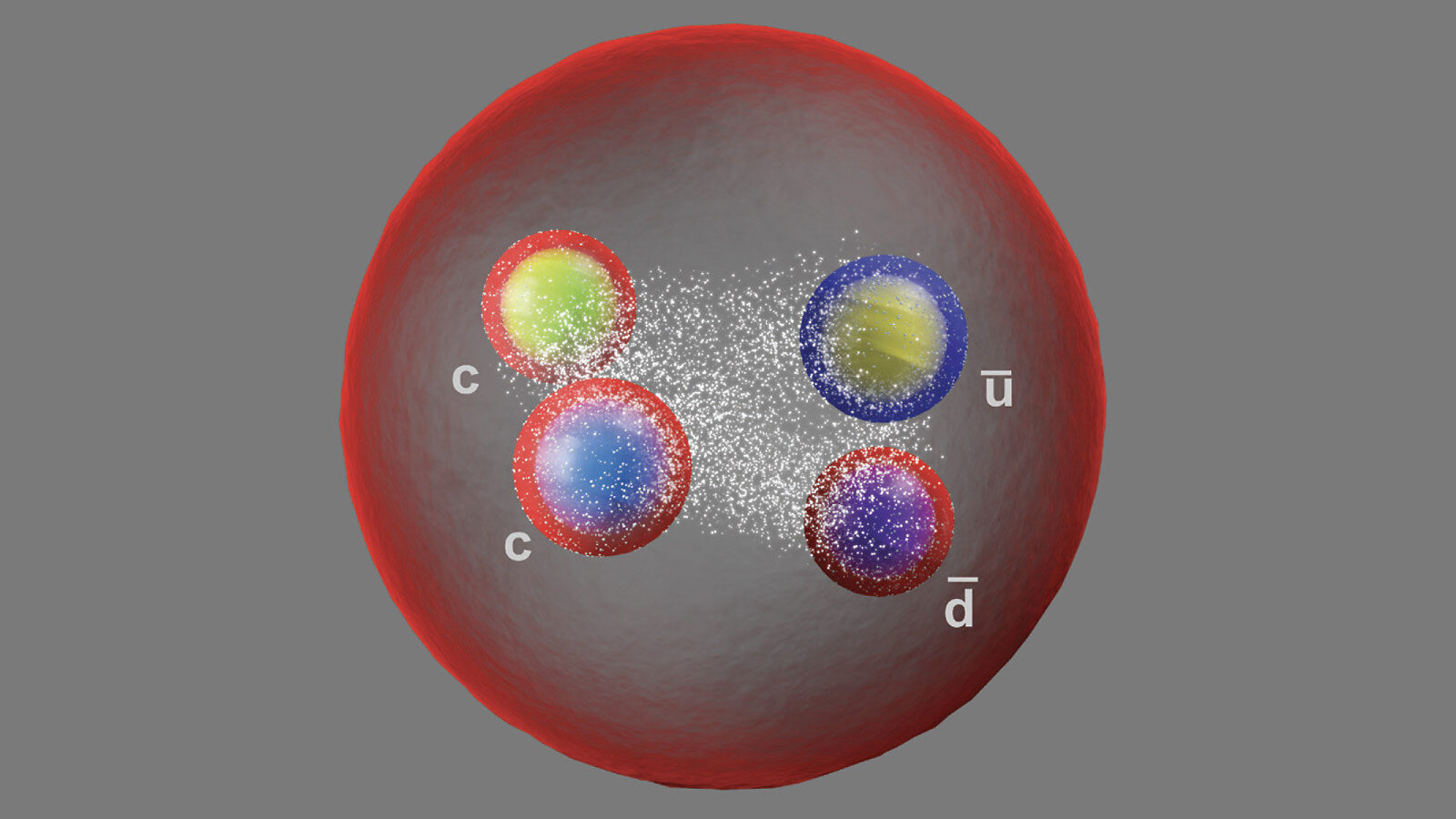 The LHCb experiment at the Large Hadron Collider is adding a new particle to its family of exotic matter. In the last seven years, the LHCb experiment at CERN has detected about a dozen types of exotic particles made up of four quarks—called tetraquarks—or five quarks—called pentaquarks. The newly discovered tetraquark is by far the most stable exotic particle they’ve found.

“This tetraquark lives at least 10 times longer than the other forms of exotic matter we’ve discovered,” says Syracuse University postdoc Ivan Polyakov, who worked on this research with his colleagues on the LHCb experiment.

The tetraquark they found owes its stability to its unique quark content: two heavy “charm” quarks and two light anti-quarks. However, it’s not yet clear how exactly this object is put together. Figuring this out will help nuclear physicists better understand the inner workings of larger atomic nuclei, which are currently too complex to describe with the fundamental laws of physics.

The messy world of quarks

Quarks are the point-like, fundamental particles that live inside hadrons, such as protons and neutrons. Most hadrons are made from two or three quarks. But in 2014, the LHCb experiment confirmed the existence of tetraquarks (and later, pentaquarks). Since this revolutionary discovery, LHCb and other experiments have continued to find new tetraquarks and pentaquarks, each with a distinctive internal configuration.

The LHCb experiment searches for new forms of matter in the collisions generated by the Large Hadron Collider. It’s difficult to disentangle exactly what’s happening when two protons collide inside the LHC, says Syracuse professor Sheldon Stone. “You have this mess of things going on in this very small region of space and time,” he says.

In this mess, quarks are liberated from the protons and swimming through a broth of gluons, a force-carrying particle that “glues” quarks together. Because quarks cannot exist for long alone, they spontaneously create more quark-antiquark pairs from the gluon broth. If quarks come close enough together, they can bind together and form rare hadrons.

These rare hadrons decay into more stable byproducts, which are captured and recorded by the LHCb detector. Those detections allow scientists to learn more about what was produced during the collision; by retracing these byproducts back to their origins, scientists can determine the properties of the original particle.

Polyakov decided to search for this doubly charmed tetraquark in data recorded by the LHCb experiment after numerous discussions with Stone and Syracuse professor Tomasz Skwarnicki.

“And nevertheless, it was a big surprise as it was not clear if such a state would exist at all,” Polyakov says. “It was a real gift, as we couldn’t have anticipated that it would have such exceptional properties.”

The long lifetime of this new tetraquark means that for the first time, scientists can precisely measure the mass of an exotic hadron. That’s been difficult to do with its shorter-lived compatriots.

“It’s because of the Heisenberg uncertainty principle,” Polyakov says.

This famous tenet of quantum mechanics dictates that it’s impossible to precisely know multiple attributes of a quantum-mechanical object at the same time. For instance, if the position of a particle is precisely known, then the momentum will remain largely a mystery. The same goes for the lifetime of a particle and its mass.

“So if the particle decays fast, there must be a big uncertainty in its mass,” Polyakov says.

In the data, scientists see this uncertainty as a wide peak smeared across numerous possible masses. But if a particle is more stable—and thus has more flexibility in its lifetime—then its mass can come into focus. In the data, this looks like a sharp peak springing up at a well-defined mass.

A precise measurement of the mass of this tetraquark will answer a question that physicists have been wrestling with since they discovered their first exotic hadron: How do the quarks bind together? Are they in a tight clump, or do they look more like a loose molecule made up of two quark pairs? Or maybe even something in between?

“Right now, it’s not yet clear,” Polyakov says. “We have measured its mass and the width of the peak very precisely. This will prompt theorists to make more accurate calculations and hopefully develop a deeper understanding of exotic hadrons.”

According to Polyakov, these exotic forms of matter could be the missing links in our understanding of a much more ordinary form of matter: the atomic nucleus.

When modeling the interactions of quarks within a stable atomic nucleus, theorists must currently make assumptions and simplifications. However, for systems containing heavy quarks, the exact calculations are better defined. Because of this, scientists use particles with heavy quarks (and their well-defined mathematical models) as a test for the theoretical assumptions about atomic nuclei.

“This new tetraquark can be viewed as a simplified model of a proton and a neutron bonded together into a deuteron,” Polyakov says. “If we can better understand how quarks bind in tetraquarks, we will have a deeper insight into how this interaction happens inside atomic nuclei.”

Polyakov and his US colleagues on the LHCb experiment are funded by the National Science Foundation. They are hoping to find even longer-lived exotic hadrons—ones that could travel up to a centimeter before decaying—in the not-so-distant future.

“We’re hoping that with the new upgrades to our detector, we’ll be able to get to that level,” Stone says.