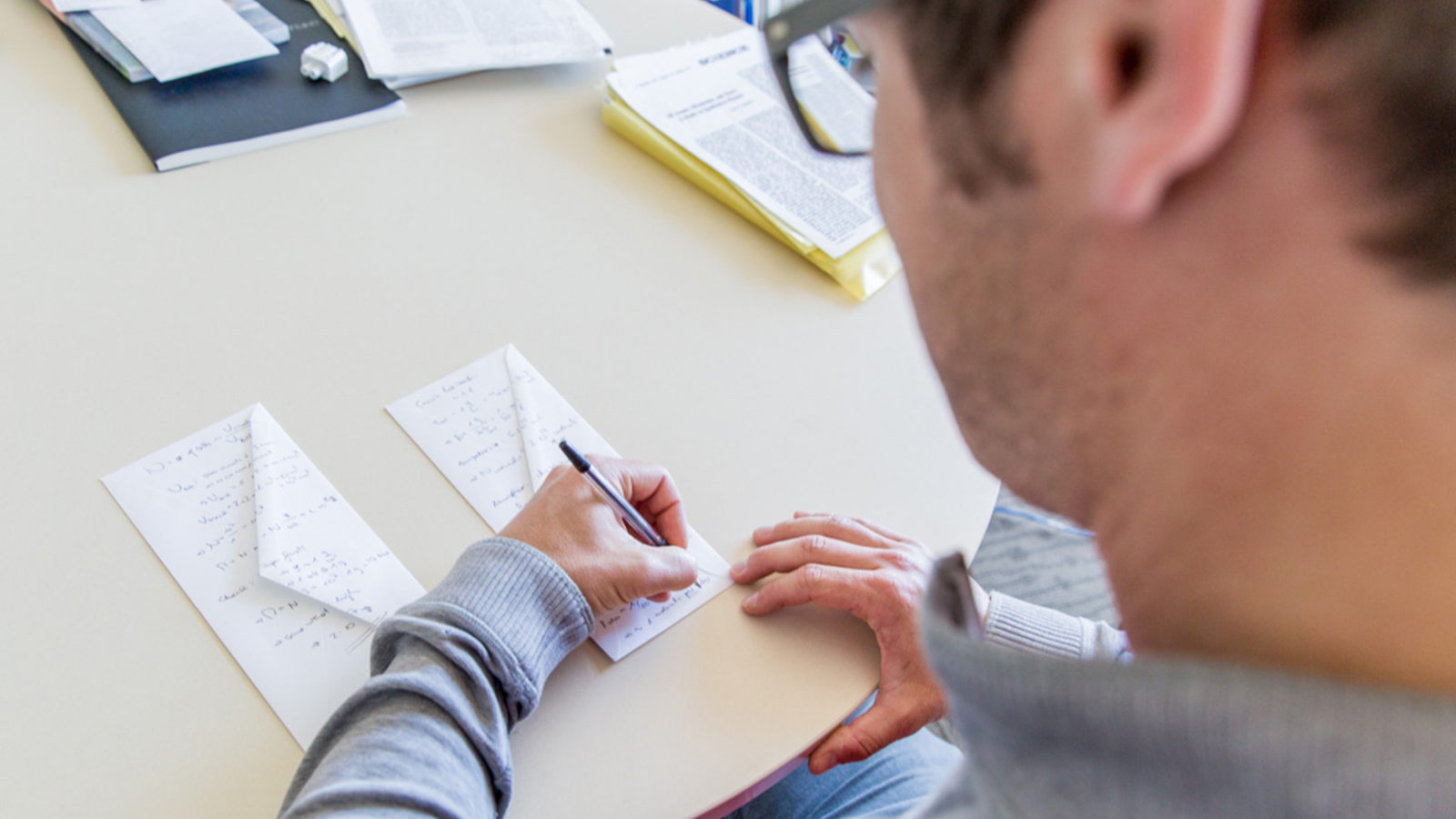 The art of back-of-the-envelope calculations

Students estimate their way through pop culture problems to learn a life skill.

Scientists of all stripes are known for an ability to grab the nearest scrap of paper and scribble out a quick calculation to check if they’re on the right track.

Among physicists, these “back-of-the-envelope” calculations are often called Fermi problems, after Enrico Fermi, the Nobel prize-winning physicist who was known for his ability to come up with solid estimates based on what seemed the flimsiest of data.

If you’d like to learn how to solve Fermi problems, the place to start is to let go of a precise answer, says particle physicist and particle astrophysicist Stefan Funk, who has taught “Science on the Back of the Envelope,” a required class for incoming Stanford University physics graduate students.

The Fermi problems students discuss in the Stanford class often have a bit of a pop culture sensibility, which Funk says helps shift the focus from the final number to the process of actually solving it.

For example, student Devon Powell challenged classmates to figure out how to blow up the asteroid from the 1998 film Armageddon and ensure that the pieces would miss the Earth. Student Ved Chirayath wanted to know how to pull off a scene from Roald Dahl’s children’s book James and the Giant Peach, the one in which a flock of seagulls on strings lift the enormous fruit.

To answer these questions, students must take stock of what they already know. For example, the asteroid that Bruce Willis battles in Armageddon is supposed to be “the size of Texas,” and just 18 days remain before impact. Students know that James’ giant peach is “as big as a house” and that peaches float, indicating they have a density somewhat less than that of water.

In the class, students divvy up the problems into digestible chunks and apply what they know, fitting the answers back together as they go. To save the planet in the first question, Willis and his crew must not only use enough explosives to blow up the asteroid, but also ensure the resulting chunks travel far enough away from each other to miss the planet. To recreate the scene from Dahl’s book, the seagulls must not only lift the peach, but also carry it across the Atlantic Ocean to New York.

“Breaking a problem down to what you know and what you need to guess at can give you an intuition into the uncertainty of the answer,” Funk says. “And seeing how the pieces fit together gives you a better understanding of what parts of the problem are important.”

Chelsea Liekhus-Schmaltz, a graduate student in the Stanford Pulse Institute (a joint SLAC-Stanford institute) who took Funk’s class, says she uses her back-of-the-envelope training frequently as a way to sanity-check experimental results.

“Knowing how to break a problem down really helps when you look at a result and ask, ‘Does this make sense at all?’ or if you need to know what might be causing a weird signal,” she says. “It’s also useful for designing an experiment. I can ask, ‘Is the process I want to measure within the bounds of my measurement technique?’“

Powell, who contributed the Armageddon problem in Funk’s class, is engaged in different research; he creates computer simulations of astrophysical processes. He says he appreciated the class, too. “It gives you a fresh perspective on the physics you know.”

See handwritten answers to the problems above here and here.

During a day of talks at Stanford University, theoretical physicist Leonard Susskind explained “Why I Teach Physics to Old Codgers, and How It Got to Be a YouTube Sensation.”