The 30-ton MicroBooNE detector, the cornerstone of Fermilab’s short-baseline neutrino program, will see neutrinos this year. 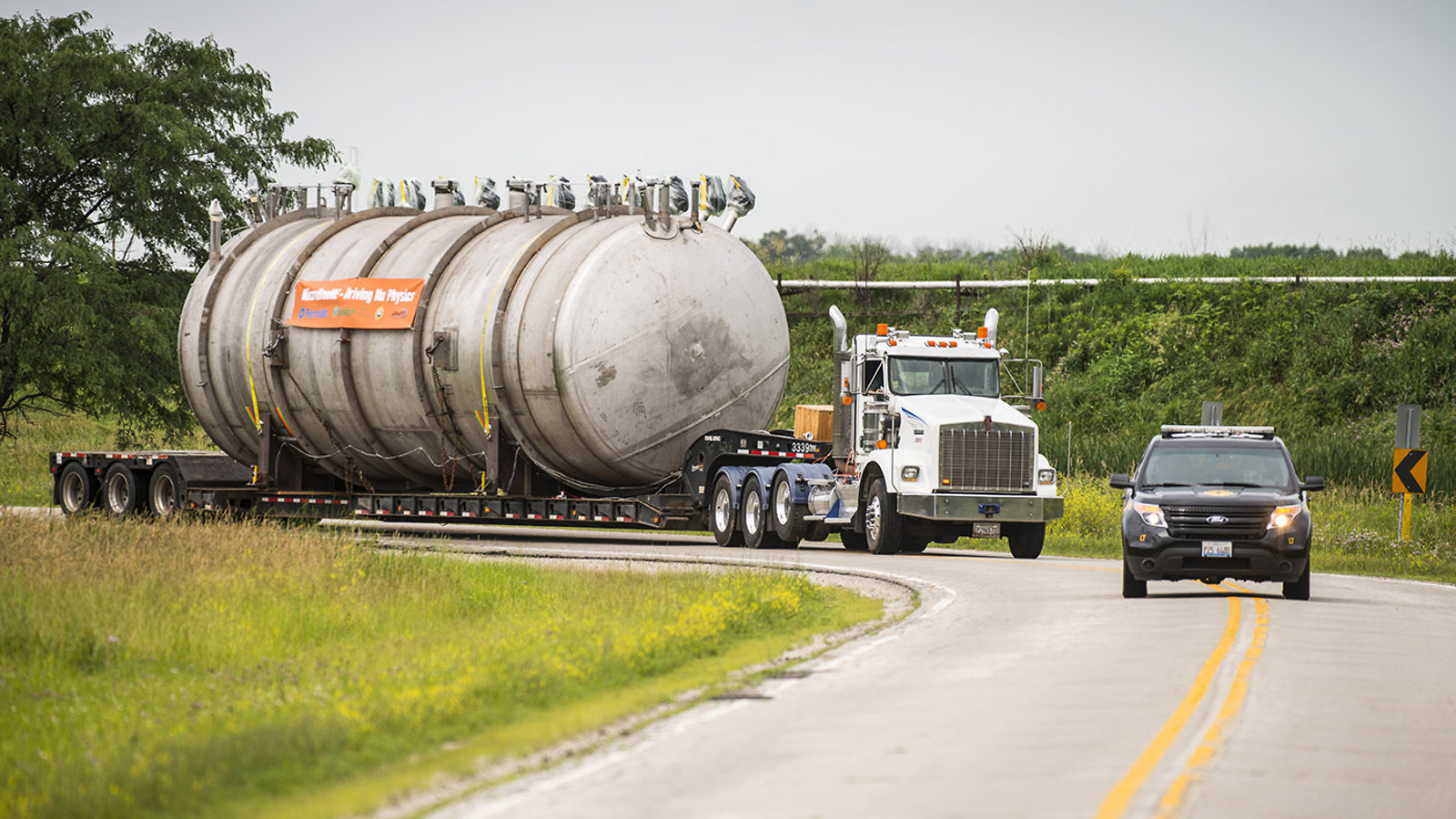 On Monday, the next phase of neutrino physics at Fermilab fell (gently) into place.

The MicroBooNE detector—a 30-ton, 40-foot-long cylindrical metal tank designed to detect ghostly particles called neutrinos—was carefully transported by truck across the US Department of Energy’s Fermilab site, from the warehouse building it was constructed in to the experimental hall three miles away.

The massive detector was then hoisted up with a crane, lowered through the open roof of the building and placed into its permanent home, directly in the path of Fermilab’s beam of neutrinos. There it will become the centerpiece of the MicroBooNE experiment, which will study those elusive particles to crack several big mysteries of the universe.

The MicroBooNE detector has been under construction for nearly two years. The tank contains a 32-foot-long “time projection chamber,” the largest ever built in the United States, equipped with 8256 delicate gilded wires, which took the MicroBooNE team two months to attach by hand. This machine will allow scientists to further study the properties of neutrinos, particles that may hold the key to understanding many unexplained mysteries of the universe.

The MicroBooNE detector will now be filled with 170 tons of liquid argon, a heavy liquid that will release charged particles when neutrinos interact with it. The detector’s three layers of wires will then capture pictures of these interactions at different points in time and send that information to the experiment’s computers.

Using one of the most sophisticated processing programs ever designed for a neutrino experiment, those computers will sift through the thousands of interactions that will occur every day and create 3-D images of the most interesting ones. The MicroBooNE team will use that data to learn more about how neutrinos change from one type (or “flavor”) to another, and narrow the search for a hypothesized (but as of yet, never observed) fourth type of neutrino.

“The scientific potential of MicroBooNE is really exciting,” says Yale University’s Bonnie Fleming, co-spokesperson for the MicroBooNE experiment. “After a long time spent designing and building the detector, we are thrilled to start taking data later this year.”

The detector technology used in designing and building MicroBooNE will serve as a prototype for a much larger long-baseline neutrino facility planned for the United States, to be hosted at Fermilab. The P5 report also strongly supports this larger experiment, which will be designed and funded through a global collaboration.

At the heart of many particle physics experiments sits a device with a catchy name: the time projection chamber.