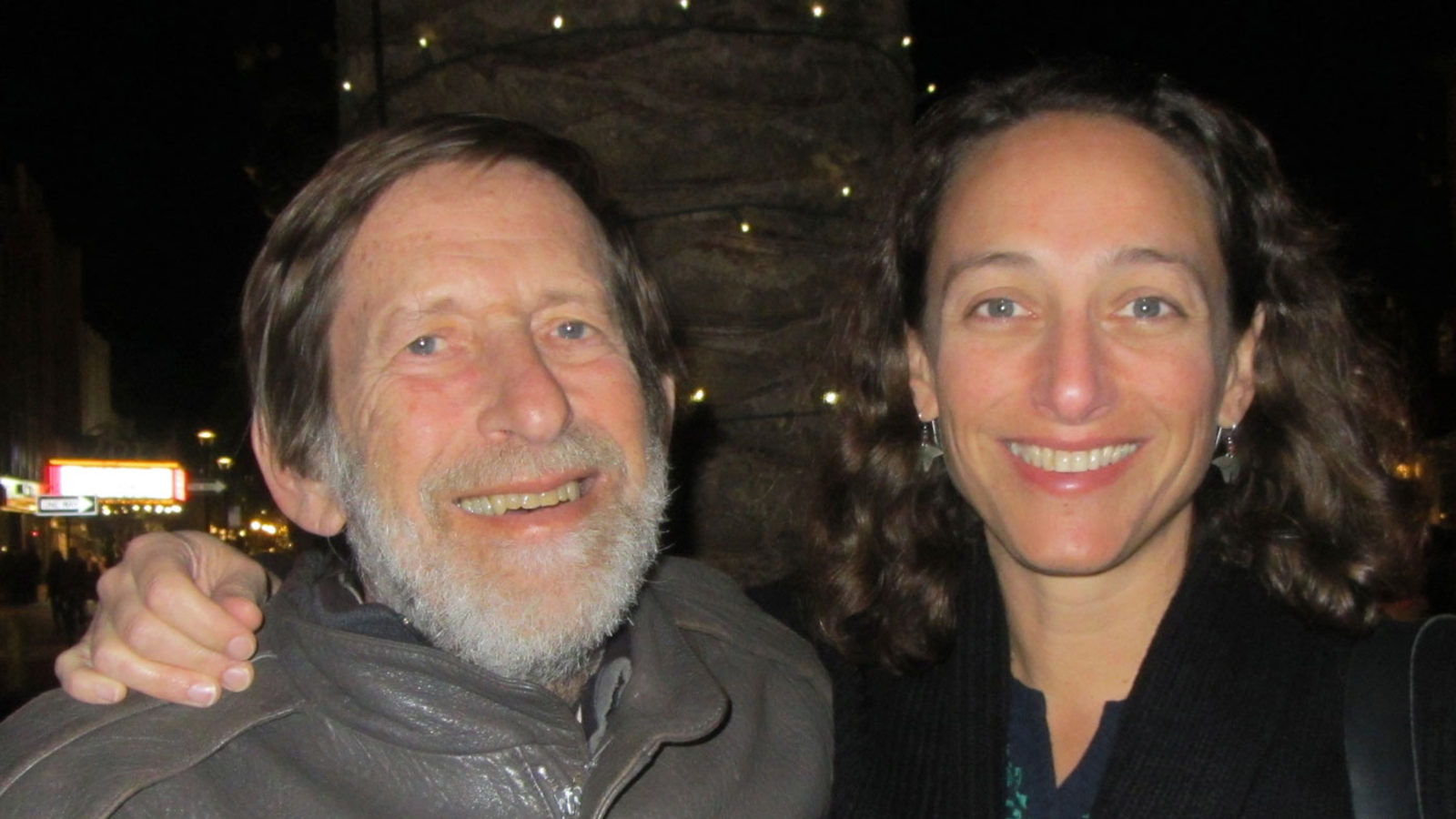 Beam on: My father’s fight with cancer

After working with particle accelerators his entire professional career, Heather Rock Woods’ father placed himself in the path of a beam to fight cancer.

The door swung shut automatically and the sign above it flashed “Beam On,” warning people away from the room where my father lay—right in the path of the beam.
For his entire professional career, at Berkeley’s Rad Lab (now called Lawrence Berkeley National Lab), at SLAC National Accelerator Laboratory and at other institutions with accelerators, he respected the “Beam On” light, keeping his body from harmful doses of radiation. Now here he was, 65 years old and willing to submit his gastroesophageal junction cancer to multiple beams of radiation for a chance at living longer.
In research, the accelerated beam (usually made up of electrons or protons) strikes a target or another beam. The shards from these collisions have completely changed what we know about the world. For example, the weak force—unlike gravity and the strong force that holds atoms together—is lopsided, which is part of the reason matter exceeds antimatter in the universe.
In clinics and hospitals, the electron beam creates intense, precisely focused radiation to kill cancerous cells while largely sparing healthy tissue. Around half of all cancer patients undergo radiation therapy, most via medical linear accelerators, like my dad did.
Before the door shut and the lights flashed, I had walked into the room with my father and the technicians, who carefully positioned him on a table right next to the medical accelerator. It looked about the size of two hulking, top-of-the-line refrigerators.
“It’s so small,” I said in wonder. I had just spent 4½ years working at SLAC, home of a nearly 2-mile-long accelerator.
“Well, it’s only 15 MeV,” my dad replied matter-of-factly, while one technician checked his exact location against measurements on a screen and the other covered him in radiation shielding, as if he were getting dental X-rays.
I thought it through. MeV is a unit of energy; it stands for mega-electronvolts. Over the course of almost 2 miles (or about 3000 meters), SLAC’s linear accelerator packs particles with up to 50,000 MeV. That’s about 3000 times more energy than generated in the 15 MeV device, which therefore can be 3000 times shorter—about a meter long, in other words.
I found it amazing: This scaled-down device, this unexpectedly useful application born in the world of very basic science, might save my father’s life. Medical linear accelerators have been treating cancer patients since the 1950s, but radiation therapy goes back more than a century to the work of two physics Nobel laureates, Wilhelm Röntgen, who discovered X-rays in 1895, and Marie Curie, who created a theory of radioactivity, discovered two radioactive elements and directed studies to treat tumors with radioactive isotopes.
Long after their experiments, when I was a summer intern at SLAC, I got temporarily locked in the tunnel that houses the beam pipe. A door had jammed. A physicist and I were checking on some equipment while the beam was off. There were interlocks, and tags with our photos that said “my life is on the line,” and a group of people on the other side of the door—all ensuring the beam stayed off. But until the door opened, I felt almost claustrophobic in the stifling tunnel 20 feet below ground.
My dad’s treatment room had far better ventilation. But despite my busy calculations of meters and MeV, some part of me felt a mild panic, a trapped feeling. I never expected he would be on the business side of the flashing lights. I also feared that this deliberate exposure to radiation might not be enough to help him.
The technicians ushered me out and verified the settings in their alcove before pressing the button that turned on the beam and the flashing sign above the door that separated us from my dad.
A medical radiation physicist had already carefully analyzed exactly how much to deliver, and where. The arm of the accelerator moved into different positions so the cumulative beams of radiation would converge on his remaining sections of stomach and esophagus but mostly avoid the cancer-free lungs and heart.
After, my dad shuffled out of the hospital. Radiation made him tired, weak and unhappy. But as part of the treatment plan, all we could say, my dad included, was, “Beam on.”
Five years after surgery, radiation and chemo—the combination so strong it seemed to nearly kill him—my dad has been declared cancer-free. The probability of this outcome, his doctors had guessed, was slightly better than 1 in 5. He’s retired from physics but back to hiking, skiing and traveling the world. I’m grateful for the physics- and otherwise-derived treatments that saved him. And I’m relieved that doctors, physicists and other researchers are busy creating less brutal, as well as more effective, therapies for future patients.
Like what you see? Sign up for a free subscription to symmetry!
Follow
Use your browser’s print dialog box to create a pdf.
Popular on symmetry