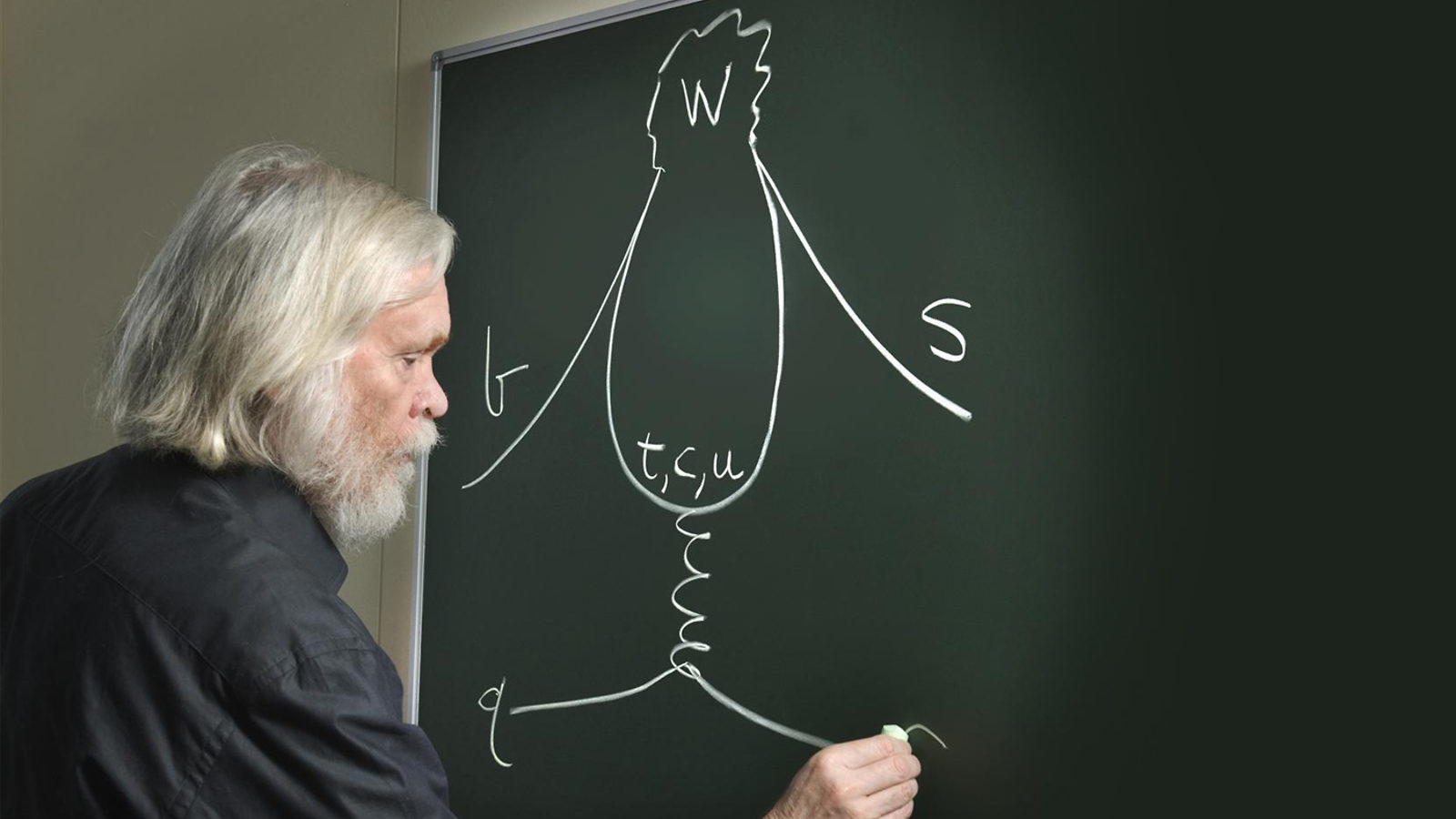 Two physicists walk into a bar and start playing a game of darts. One turns to the other and says, “Let’s make a bet. If you lose this game, you have to use the word ‘penguin’ in your next paper.”

This may sound like the beginning of a bad joke, but it is actually the reason that, in 1977, a certain type of drawing in particle physics became known as the “penguin diagram.” Theorists and physicists from the LHCb experiment at CERN told the tale last week at a Google+ Hangout.

CERN theorist John Ellis (pictured above) was the scientist who took the penguin bet. He did not play his best game of darts that day.

At the time, Ellis and some colleagues were working on a paper on the properties of the bottom quark, a fundamental particle that scientists recently had discovered at Fermilab. Part of the work involved studying how the newfound particle decayed.

While looking through diagrams of bottom quark decays late one night, Ellis found his flightless bird.

He was examining a diagram of the decay of a bottom quark into a strange quark. In the middle of the bottom quark’s transition, something spooky happens: “Virtual” particles blip into existence for just an instant.

Particles like these are everywhere. Even the space we call a vacuum is teeming with them. They are the reason accelerators like the Large Hadron Collider are so useful in the search for new particles.

The LHC gives protons extra energy and then smashes them together. The extra energy causes particles that are normally present only virtually, in the vacuum, to pop into existence—but only for a split second.

In the diagram of the bottom quark decay, the virtual particles appear as a loop and a series of squiggles. The final drawing—first introduced by Mikhail Shifman, Arkady Vainshtein and Valentin Zakharov—almost resembles a bird with a head, a round, white belly and two feet.

Honoring the bet, Ellis called it a “penguin diagram.” The name has stuck to this day.

The then-student who made the penguin bet with Ellis was Melissa Franklin, now the chair of the Harvard University Department of Physics. Her inspiration was a joke that had nothing to do with Feynman diagrams or particle decays:

A truck driver is delivering two penguins to a new zoo when he runs over a nail in the road. He manages to flag down a passing motorist.

“Hey there,” says the truck driver. “I’ve got a flat, but I need to get these penguins to the zoo ASAP. Will you please take them while I fix this problem?”

“Of course, no worries,” says the motorist. “Happy to do it. I love penguins.”

So the two penguins crawl into the passenger seat, and off they go.

Well, it takes a little while, but the truck driver gets his tire fixed up. He drives into town headed for the zoo, but when he passes by the cinema, who should he see walking out the door but the motorist with the two penguins in tow.

“Woah there,” he calls out. “I thought I asked you to take them to the zoo!”

“Oh yes, you did,” says the motorist. “But we had a bit of change left over, so we decided to take in a movie, too!’